It takes a lot for someone to pack up their bags and decide to travel the world on a whim. For many of us, it is almost impossible to visualise it; purchasing a one-way ticket, clutching a bag full of clothes, hopes and dreams. In the end, our feet often feel drawn to return to familiar, solid ground.

However, that is exactly what 27-year old traveller Ruby Peng did. Ruby left Singapore for Texas five years ago at the age of 22, and began working as a receptionist. After saving up $2,000, she decided to leave America for a chance to travel the world.She is still travelling the world with no intention of slowing down. 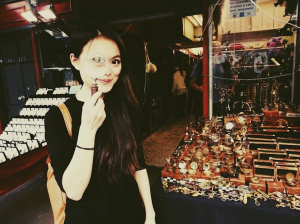 Having travelled to several countries including Rome, Hungary and Turkey, the self-described city girl has amassed a luggage full of stories. Of all these countries, Turkey has a special place in her heart.

“It’s so misrepresented in the world. I think most people think of it as a Middle Eastern country, but it’s actually almost European in nature. I think people would also think Turkey is dangerous, but I really like it there. It was the safest country I have ever been to, and the people over there are extremely friendly.” 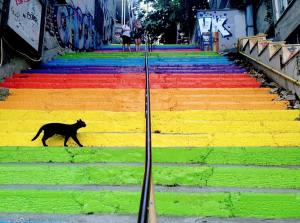 A black cat in a sea of colours

“Istanbul to me is almost like New York. Their arts scene is huge, and there’s always something going on. I went to a music festival there once, and it was filled with Turks, compared to one in Beijing where the majority of people there were expats and foreigners. They are really cool, and the friends I’ve made in Turkey are extremely artistic. The women there are also effortlessly beautiful! They seem to have perfectly drawn eyebrows all the time.”

“I feel like my Asian friends will say they’re jealous of me when I travel to Europe, but when I travel to places like Africa or the Middle East, their jealousy will turn to concern. But for my friends from Europe and Australia, they will just be like, “That’s so cool!” to everywhere I go.” There is indeed a sense of Euro-centrism among many Singaporeans. However, these stereotypes haven’t thrown Ruby off her trailblazing path yet.

Ruby was able to travel around the world without spending a ton of money on accommodation and food thanks to the Workaway programme. In Turkey, she volunteered at a hostel in Istanbul for three weeks, and a guesthouse in Kusadasi for almost a month.

The Workaway volunteer programme is a site set up to promote fair exchange between budget travellers, language learners or culture seekers and families, individuals or organizations who are looking for help with a range of varied and interesting activities. The Workaway programme challenges the usual idea of volunteering, which commonly refers to doing work such as spending time at an orphanage or building a school in an impoverished country. Instead, the Workaway programme provides the guest free food and accommodation under a host, and the guest will work or do chores for the host in return.

Under this programme, Ruby was able to explore Turkey at her own pace. She enjoyed free accommodation and food in exchange for a few hours of volunteer work daily. This meant that she would have to live on a low budget, not that it mattered to it. When she was in Cappadocia, she didn’t partake in the normal tourist attractions such as horseback riding or hot air balloons, but instead hiked a lot. 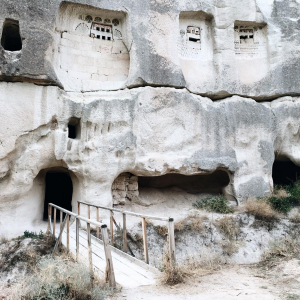 “I think it’s the best thing to do if you’re trying to travel budget. I also walked everywhere. There was no need to take public transport, even though they are readily available. Some places I went, like Turkey’s underground city required me to pay an entrance fee, but other than that, I didn’t spend money on tourist things like buses that show you around. I think to truly explore cities like Istanbul or Madrid, it’s always better to walk around like a local.” 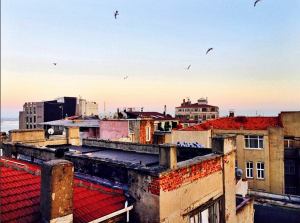 The view from a rooftop in Istanbul!

As a result, Ruby ended up spending almost nothing. She set aside a budget of $100 a week, but she usually spends so little that she would end up with a lot of money saved each week, which in turn funds her festivals and concert tickets! “Within Europe, the flights are so cheap, so every volunteer’s host will have no problem paying a flight or train ticket for you, so I feel without external help, I can travel for around five years through volunteering.”

After Europe, Ruby has her sights set on Morocco, Egypt or Israel. A one-way ticket from Barcelona, Spain to Fez, Morocco would cost about 12€ (S$19), an unbelievably cheap price even compared to Singapore’s budget flights. Ruby quipped that it is actually cheaper to fly around Europe than travel around England for a day!

GETTING OFF THE GROUND

Her experience in Turkey taught her to travel to places she had never been before. As she went in without any expectations, she was pleasantly surprised. “I had a friend who went to Iran alone, and got around through couch-surfing. And I feel like I could do what she did, even though it takes a lot of courage to explore a foreign country and couch surfing alone.”

To Ruby, it was easy for her to start her travels, as she did not have anything to lose. However, for the majority of people , they may not be able to do it as they have a job, and when they travel, they could only do so as a tourist. For travel enthusiasts who want to emulate what she does, she has this to say:

“I would tell you guys to study as much as possible, and when you get a firm foundation, you can do whatever you want. So that when you travel like me, and in the off chance that you run out of money to travel, you always have a backup plan back home. So don’t do it on a whim, but if you truly want to do it, I can tell you it is possible, easily and without a lot of money. The most important thing is to be able to take the first step, and have a thick skin.”