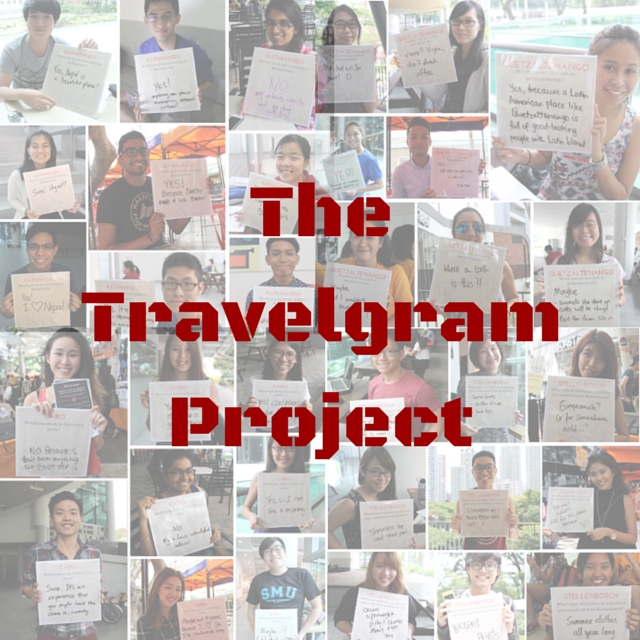 Over the past 2 months, I have been working on a photo experiment project for GoBeyond.SG called The Travelgram Project. It is an Instagram project that aims to show the Singaporean’s impression of regions like Latin America, Middle East, Africa, South and Central Asia as well as to highlight them through an impression board. And this was what I found out during this project.

Breaking our Brains over the Concept
A little background story here, just bear with me! A big part of why this project started was because a lot of what we hear about Latin America, Middle East, Africa, South and Central Asia are packed with information reinforcing the stereotypes associated with these countries. I wanted to push Singaporean youths to rethink their view on certain countries.

From:
“Africa is all about Ebola, starving children and animals.”
“Latin America is where I can find my badass mafia soul mate.”
“Russia is all about the vodka.”
“Middle East is home to terrorists and everywhere has a bomb ready to be detonated.”
“South Asia? Are you sure it safe?”

To Maybe Something like:
“Wow! I didn’t know South Africa was chilly!”
“Latin America is a really beautiful place with murals everywhere”
“Russia has beautiful architecture and the Red Square is perfect to skate on.”
“The people in the Middle East are so warm and friendly and Iran has beautiful mosques”
“South Asia? It’s so easy to assimilate into the rich culture there.”

Hello My Name is… and I’m Not Trying to Sell You Stuff
I went around asking youths to help me with this project. It was only when I started explaining the rationale behind the project that people stopped giving me weird looks. Plus, they were very happy to help when they realised that I was highlighting countries that are not usually travelled to.

So I used the interesting stories that GoBeyond.SG had and crafted questions like “What clothes would you need in Stellenbosch (South Africa)?”.

We had a majority of people telling us shorts, t-shirts, tank tops and a variety of other summer clothes. This worked very well because everyone was shocked when I told them that South Africa is actually quite cold during the winter months.

When you head out to ask people on the street for their opinion on things, you are bound to get rejections. But I did not expect only two people out of the 60 plus people to reject us. This encouraged me a lot seeing some of them so readily saying yes to helping us answer the question.

However, there are also some people who did say okay but gave us weird answers like “Mos Burger plus Cow = Moscow”. The answers were illogical but it does add a lighthearted touch to the whole picture collage.

, it didn’t work out as well as I hoped. So I changed it to just a photo experiment where GoBeyond.SG would publish the photos on our Facebook and Instagram instead.

What Have I Learnt?

the perspectives of Singaporeans who have actually been there. If they can take that step out, why can’t we?

Although it was mostly gasps and cheeky laughter, it was very refreshing to see these reactions and some of the participants were curious about the places as well. I remembered there was a girl who answered the board and she turned to tell to her friend about Africa and how she wanted to travel to Madagascar one day.

I realized that some people have no clue what Moscow is. The first thing they said when they saw Moscow was “Mos burger and cow ah?” and it was not just one person that said it. It was a few.

Ultimately, I would just like to say that you don’t have to travel to these places, but it would be good to at least have the knowledge about them.

Here are more responses to the Stellenbosch question.

Want To See Our Other Stories?