“I have already gotten lost twice today,” Mandy Tay sheepishly admits, as I sat down with her for an interview in the heart of Singapore’s Central Area. “I’m so bad with directions, there’s no hope for me.”

For someone who says that she’s hopeless at navigation, that doesn’t seem to affect Mandy’s penchant for globe-trotting. The videographer and trailer producer has already traversed her way around the world, leaving her footprints behind in 37 countries and counting. Off-beaten places like Morocco, Serbia, Croatia and Czech Republic topped the list. 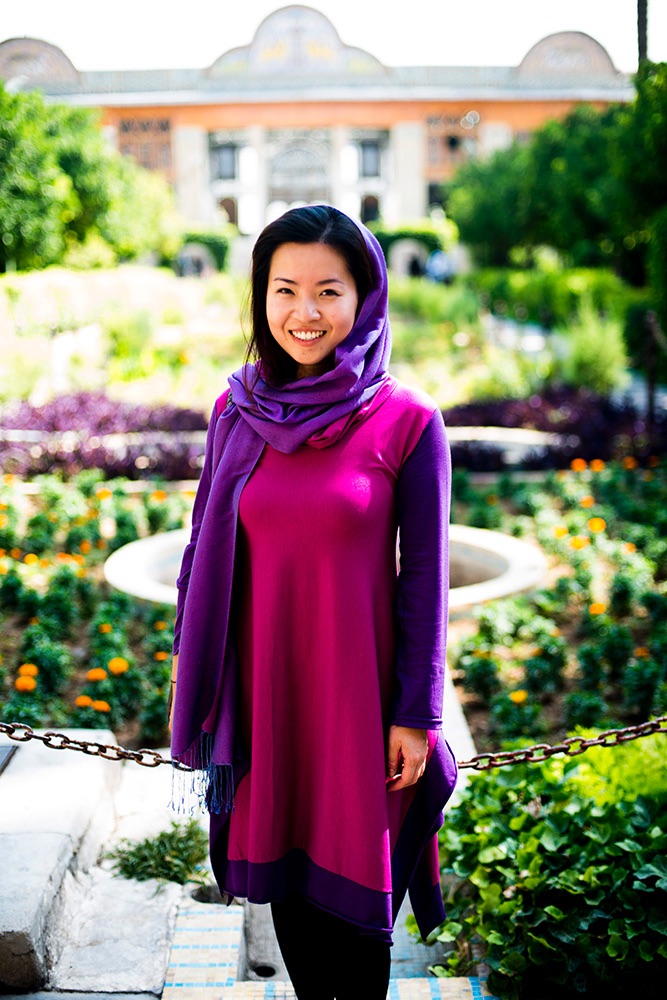 Meet Mandy: While in Iran, Mandy had to don a headscarf for her duration there. All women visiting Iran have to wear a headscarf, regardless of their religion. (Photo: Mandy Tay)

Having worked as a trailer producer at the Middle East Broadcasting Center (MBC) in the United Arab Emirates (UAE) for three years, Mandy struck gold when she received an offer to go on a holiday in Iran via couch-surfing.

Couch-surfing is common amongst many travellers who want to experience a slice of the local life. Travellers will usually stay together with their hosts for the duration that they’re in the area.

Mandy immediately pounced upon the Iranian couch-surfer’s offer, as visiting Iran had always been something she wanted to do. Mandy described the planning of the Iran trip as ‘spontaneous and unplanned’, as she only booked the tickets two hours prior to her flight. 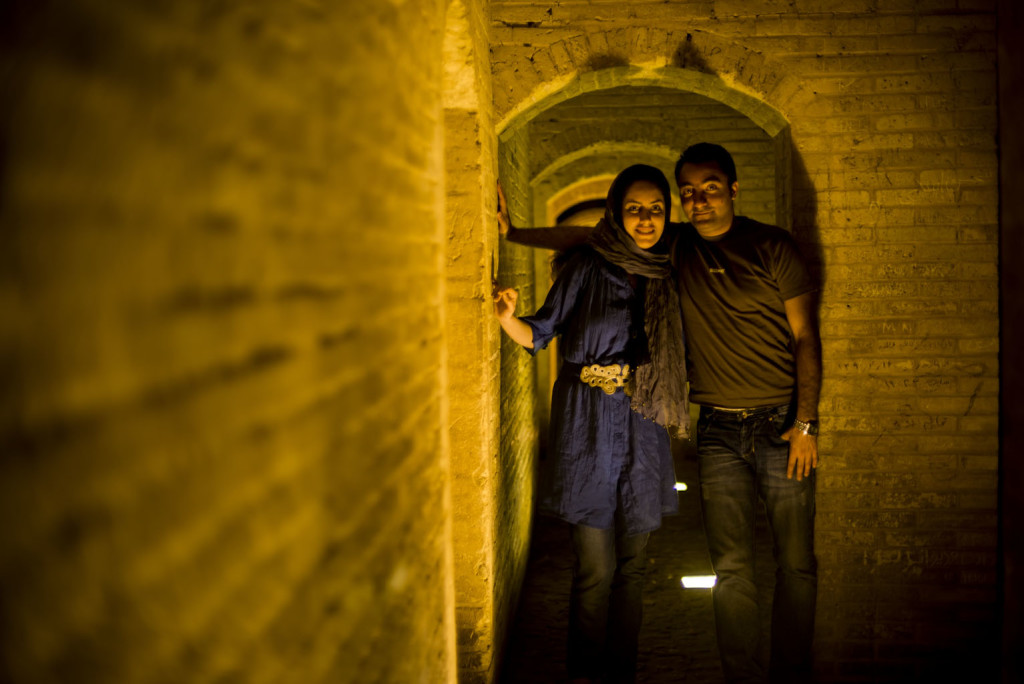 A first for everything: Mandy’s first couch-surfing hosts, Erfaneh and Shahin. She stated that couch-surfing with them was ‘a turning point in her life’. (Photo: Mandy Tay)

Despite travelling on her own to Iran, Mandy was ‘well-taken care of’ by many of the Iranian hosts and locals when she set foot in the Middle Eastern state.

Historically known as Persia, Iran is the second largest country in the Middle East. Home to 78.4 million inhabitants, most of the Iranians are mostly Shia Muslim (one of Islam’s two big sects) with Persian being the official spoken language. 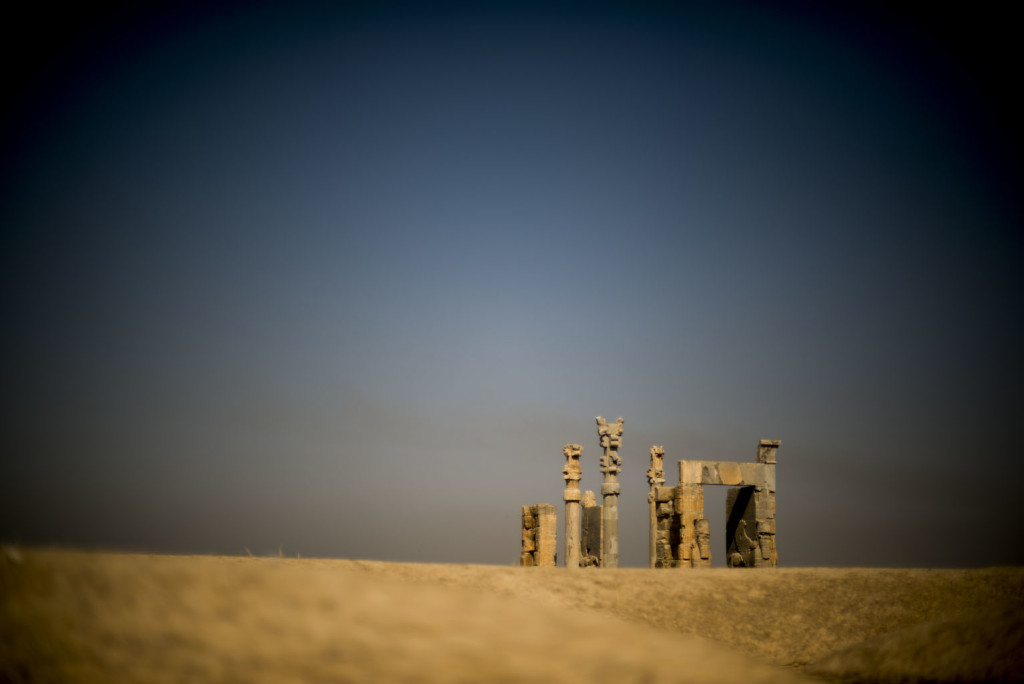 Persepolis: Also known as ‘The Persian City’, Persepolis is a ceremonial capital made up of stone and wood. Found in the city of Shiraz, it is believed to be founded in the 6th century BC. (Photo: Mandy Tay)

During Mandy’s two week tour in Iran, she managed to explore the cities of Tabriz, Tehran, Isfahan and Shiraz. Mandy particularly enjoyed her visit to Tabriz, a county in East Azerbaijan Province in Iran, and home to one of the oldest bazaars in the Middle East.

Mandy recalls an incident when visiting the Tabriz Bazaar with her friend, Sina. They spotted an elderly Iranian man pushing a cart, and moments later, another Iranian man joined in to help with the pushing.

As they watched the scene unfold before them, Sina explained that as the Tabriz Bazaar was an old bazaar (it dates back to the 13th century), many of the stores were passed down from generation to generation. “Everyone knows one another, and helps one another here in the bazaar,” Sina added.

After pushing the cart up a slope – with the toughest stretch over – both men left the cart. It turned out that the cart’s owner was in front hauling another cart, and the two men were just strangers willing to lend a helping hand whenever needed. 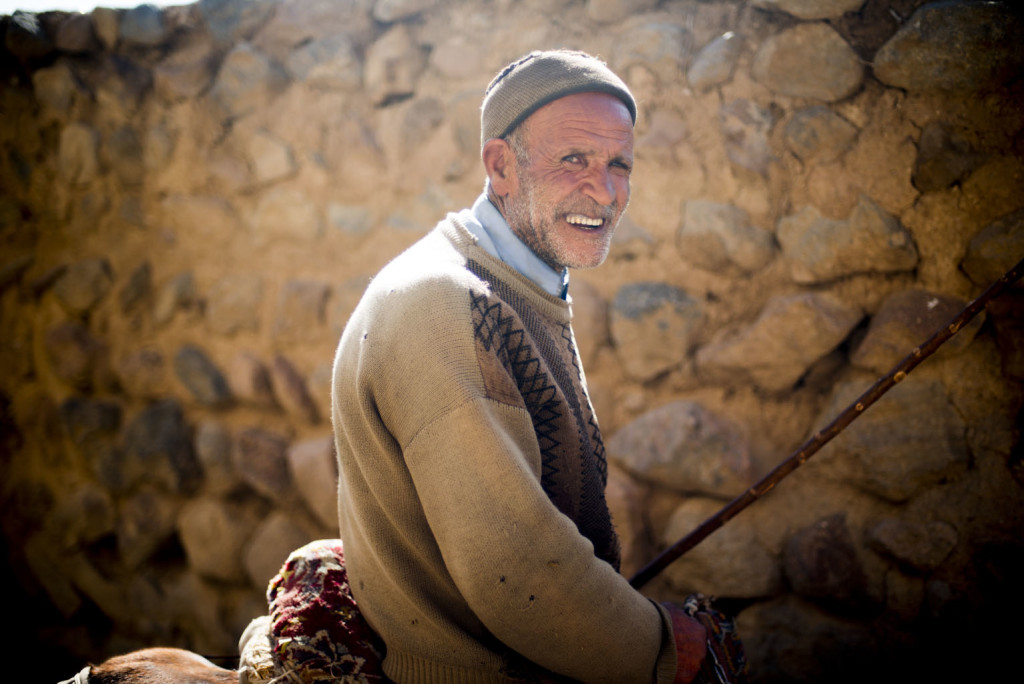 The amiable tour guide: A villager that Mandy met in Tabriz, who offered to take Mandy on a tour of his neighborhood. (Photo: Mandy Tay)

That was just the first of the many encounters Mandy had with kind Iranians.

Another incident involves Mandy and two other friends while travelling on the metro at Tajrish station. Due to the sudden influx of commuters, one of Mandy’s friends got separated from the group. One Iranian commuter, who saw everything and understood what happened, gave a nod towards Mandy as though saying ‘Don’t worry, I’ve got this’. 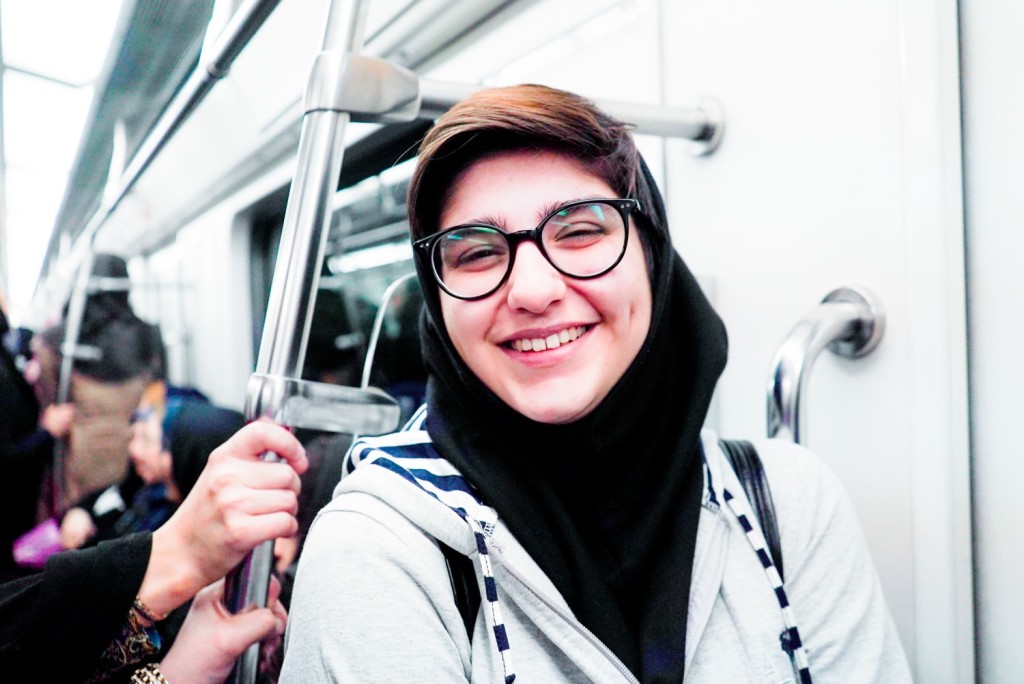 Friendship in unexpected places: On-board the metro, Mandy met Melika, an Iranian English translation student. Melika helped Mandy translate from Persian to English. Melika’s classmates also happened to be on the train, and they invited Mandy to lunch. They ended up spending the whole day together! (Photo: Mandy Tay)

True enough, the Iranian man managed to persuade the rest of the commuters to move further into the train. After some squeezing, Mandy was able to reunite with her friend, but not without wanting to thank the Iranian man who made it happen. Mandy wanted to pass him a pin with the Singapore flag printed (she carries around 50 of them in her bag when travelling). However, the man had already disappeared into the mass of commuters. 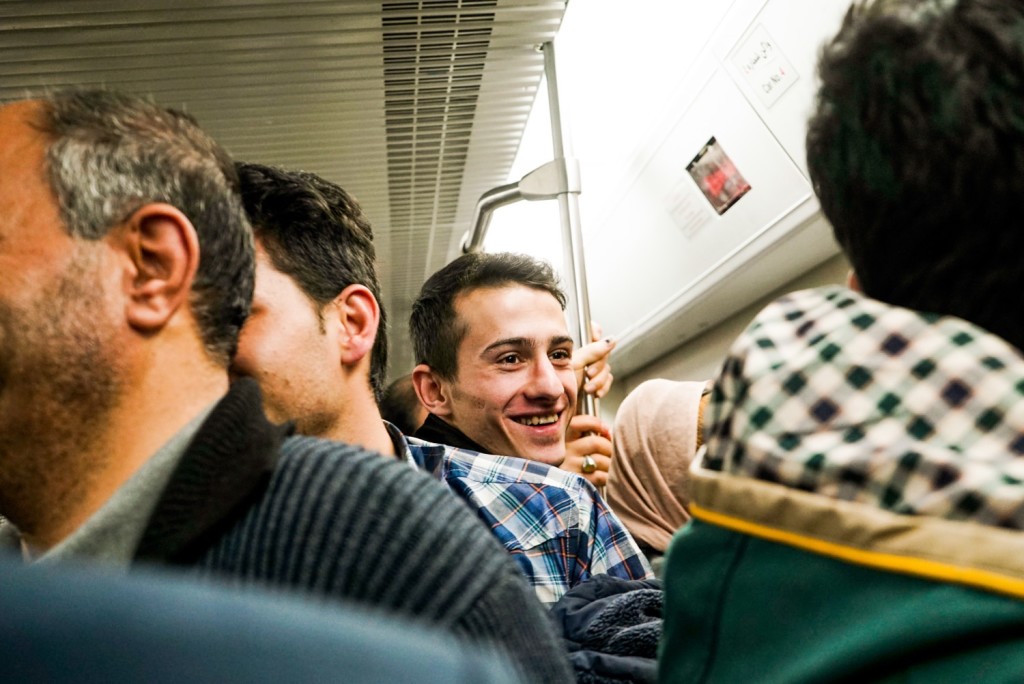 The Iranian metro: A smile amongst the sea of faces. (Photo: Mandy Tay)

Surprisingly, the surrounding commuters understood what Mandy was trying to do, and managed to pass the pin to the Iranian man on her behalf.

Then, the most unexpected thing happened. An arm extended out from the sea of commuters, with three sweets resting on its palm, one of each for Mandy and her friends. Turns out that the arm belonged to the same Iranian man! The sweets was a ‘thank you’ in exchange for the little Singaporean token Mandy gave him. 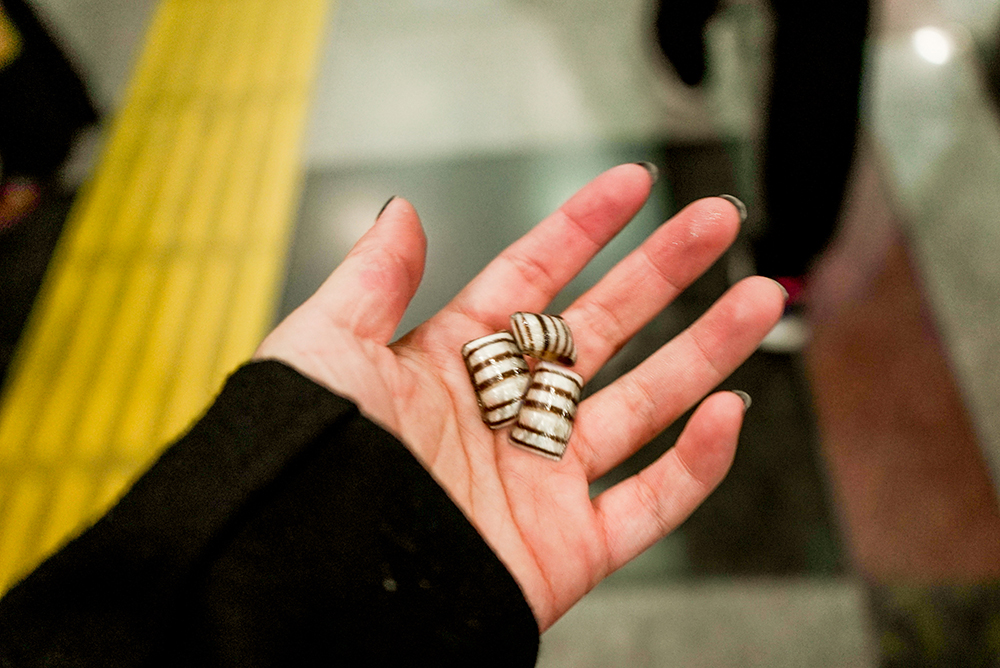 The thought that counts: The three sweets given to Mandy by the kind Iranian man. (Photo: Mandy Tay)

“That has to be the best travel moment I’ve ever experienced so far,” Mandy said, smiling. Even though this incident happened on Mandy’s third visit to Iran, it proved the old Iranian saying true, ‘ta se nashe bazi nashe’, translated as ‘third time’s a charm’!

Mandy described the Iranians as a genial bunch, and are ‘very smiley’. When asked about how she broke the ice with the Iranians, Mandy credits it to her picking up the local language wherever she goes. “I always learn to say ‘nice to meet you’ first, and the locals are always pleasantly surprised when they hear it from me,” Mandy said. 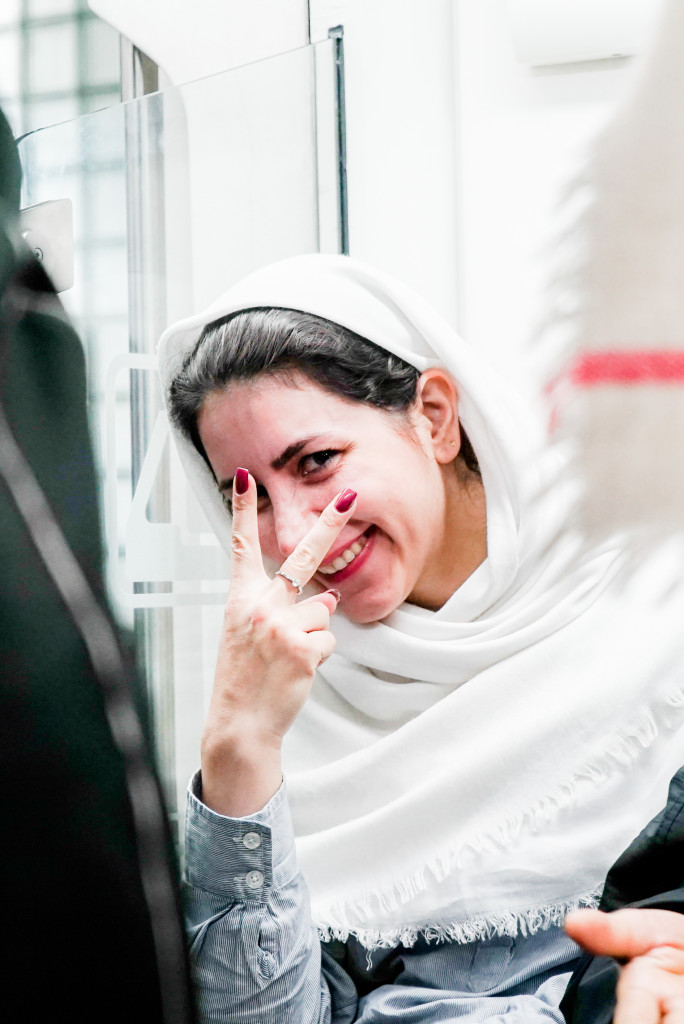 A friendly face: Mandy met this lady when travelling on the Tehran Metro. This kind lady told the other women on the metro where Mandy’s stop was, so that Mandy wouldn’t miss it. (Photo: Mandy Tay)

Besides the Iranians’ generosity towards others, there are so much more to Iran that Mandy has to love. One of it is the Iranian cuisine.

Mandy shared that her favourite Iranian food is Kabab Koubideh. Kabab Koubideh, also known as an Iranian meat kebab, is made from ground lamb or beef. It is usually served with Polo, Persian rice mixed with oil, salt and saffron.

Another Persian dish that grew on Mandy is the chilled dessert Faloodeh. “I love that dessert so much that my friends will sometimes say the word ‘Faloodeh’ to get me all excited,” Mandy admits, laughing. 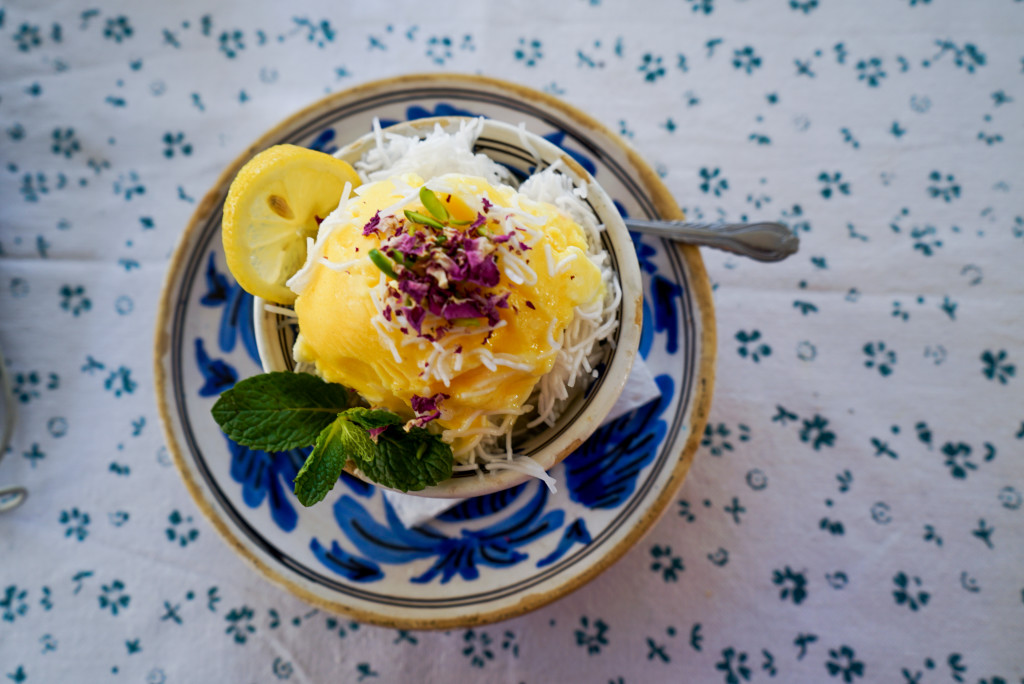 Fancy a Fadooleh?: Fadooleh is a dessert made up of thin vermicelli noodles mixed into a semi-frozen concoction of sugar and rose water. (Photo: Mandy Tay)

During Mandy’s time in Iran, she decided to capture her experiences travelling around the country on film.

“I didn’t tell my mother that I was travelling to Iran. The plan was to make a video of me in Iran, and show it to my mother,” Mandy said, explaining the reason behind her video. Mandy wanted to see her parents’ reaction to their only daughter exploring the Middle Eastern state, and had also requested the help of her uncle to film their reaction.

However, how Mandy’s mother reacted to the Iran video was unexpected. “Where is Iran?” Madam Tay casually asked, much to Mandy’s amusement.

Mandy’s plans to surprise her mother might have backfired, but the Iran video reaps more than just a few good-natured laughs.

The two minute long video shows more faces than scenic Iranian landmarks, as Mandy claims that her favourite memory of travelling are ‘the people I’ve met’.

The many faces featured in Mandy’s video are those of her friends, friendly strangers she met on the streets or hosts who accommodated Mandy during her stay in Iran. The elderly couple featured towards the end of the video are actually parents of Mandy’s couch-surfing host, who insisted on taking Mandy on a five-hour drive from Isfahan to Shiraz and showing her sights along the way.

“Nothing is scripted or rehearsed,” Mandy said, referring to the Iran video. All the ardent expressions and actions seen in the video are genuine. Mandy’s favourite part of the whole video has to be the scene where two best friends reunited in Iran.

The story goes like this: Medhi, the brother-in-law of Mandy’s host, wanted to show her Chehel Sotoun, a landmark in Esfahan. After making 2-3 failed trips down due to the park’s closure, the largest coincidence happened on their last attempt to visit the landmark. In Chehel Sotoun’s secluded carpark, Medhi bumped into his best friend. What’s most surprising is that both Medhi and his best friend weren’t from the same city, and didn’t even know that both were in Iran at the same time. Talk about a ‘small world’ in a big country!

Mehdi started apologizing to Mandy about how he was unable to show her Chehel Sotoun, to which Mandy reassured ‘the park will always be there, but this moment with your best friend, it will never happen again’. 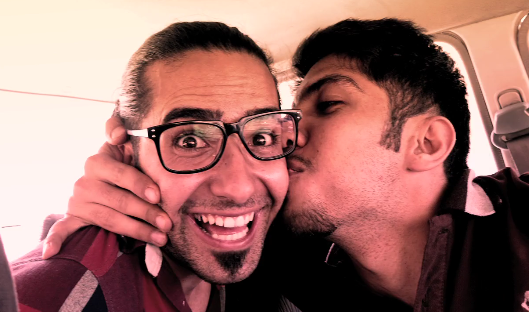 It’s all fate: Medhi and his best friend, obviously exhilarated at bumping into one another. (Photo: Mandy’s Iran video)

Ever since Mandy uploaded her Iran video, it has garnered more than 130,000 views on YouTube and Vimeo. What Mandy received goes beyond just likes and views, they also come in the form of heartfelt ‘thank you’ emails from those who viewed the video.

Emails from Singaporeans and Iranians make up most of the mail Mandy received, with grateful Iranians forming the bulk. The Iranian viewers told her: “This is the Iran that I know, this is the side of Iran that we want to show!” Singaporeans, on the other hand, commended Mandy on being able show the ‘lesser seen’ side of Iran to the world. 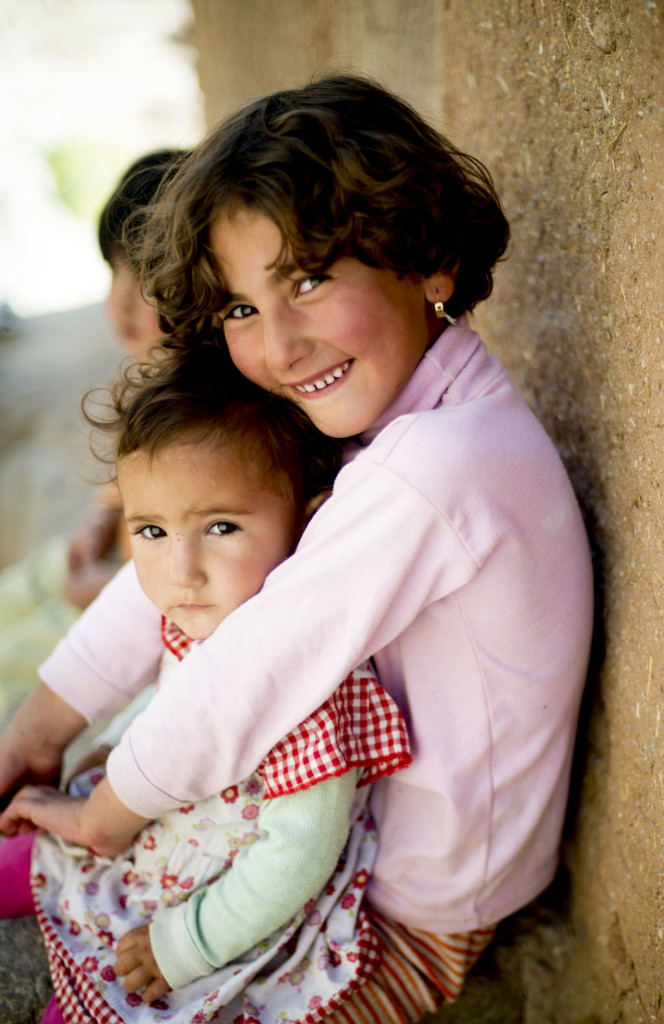 Nothing but smiles: Two girls from the Tabriz village. (Photo: Mandy Tay)

Through this video, Mandy hopes to change the perceptions of Iran the mass media portrays. Iran has been caught in a negative mold that is difficult to break out of, due to the country’s past involvement in war and bilateral tensions with other states.

“The point of this video is to show people what I saw in Iran,” Mandy said. “What I experienced happened to be very different (from what the media portrays).”

“The video is also a small ‘thank you’ to the amazing hospitality shown by the Iranians,” Mandy added, beaming.