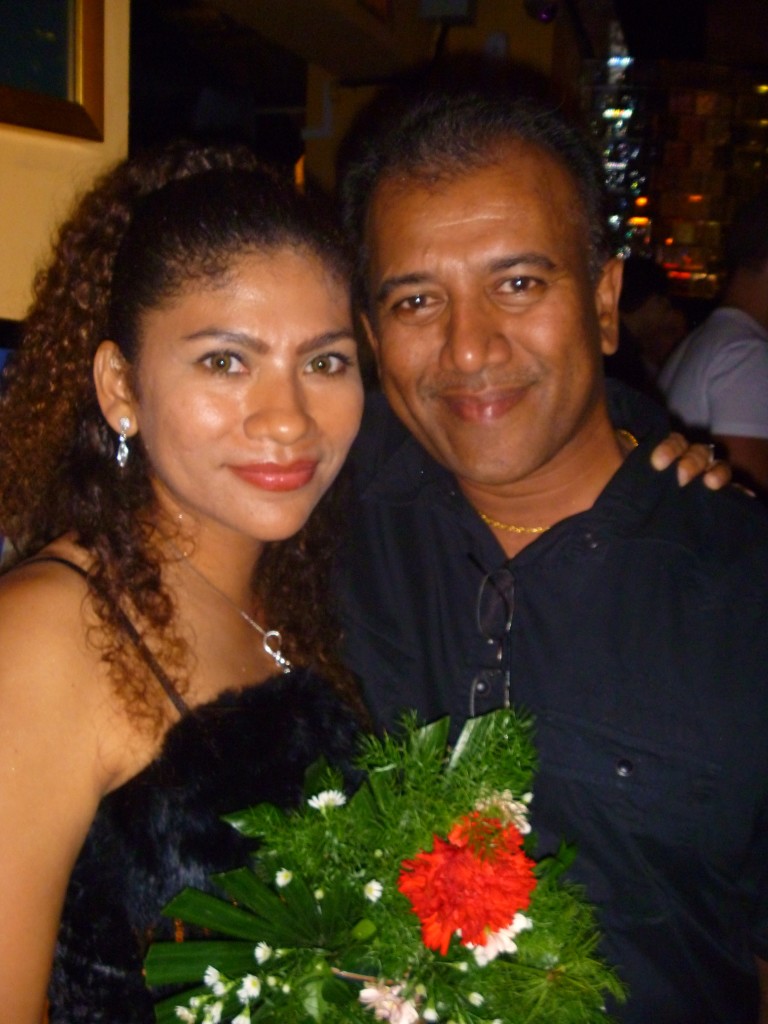 Marisol Cuevas, 40, is from Acapulco, Mexico. Boniface Philip (she calls him “Boni”), 49, is from Singapore, a good half way around the world. The two met in Tijuana, Baja California Norte, Mexico, in 1995 and got married a year later. They will be celebrating their 19th wedding anniversary on 25th February. This is Marisol’s story. 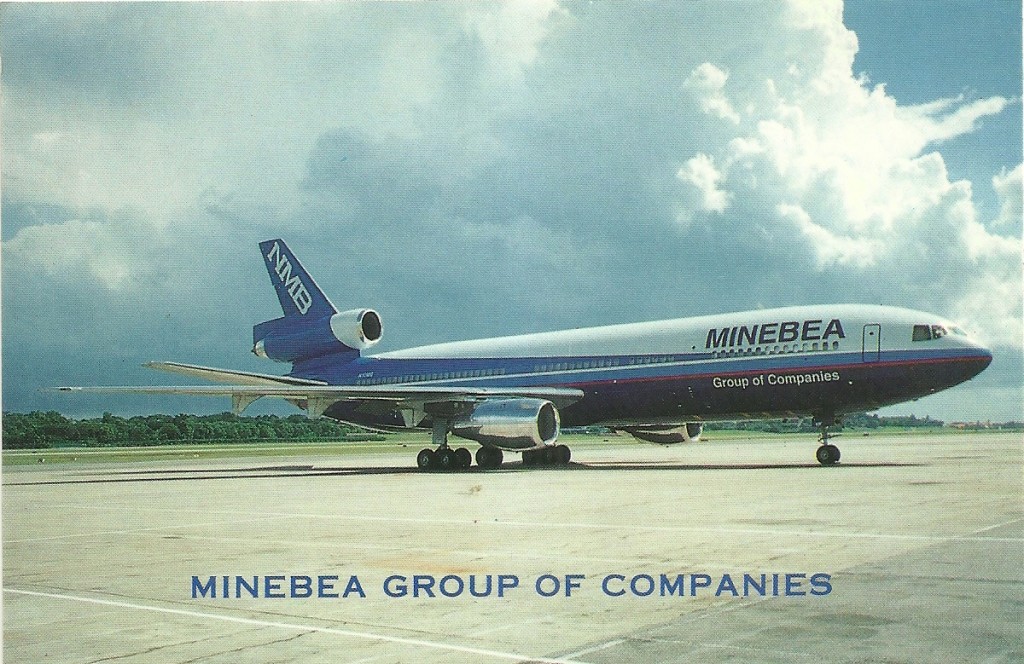 Stage One: The Ordinary Life

His Singapore based company had a major Aircraft maintenance project venture in Tijuana, Mexico lasting seven to eight months and on several occasions we had to work together on his company aircraft project. He said then, he only saw a few females working in the company, but there was one that did catch his eye (that’s me).

My boss sometimes sent me to the customer office (also Boni’s office) to check or collect some documentation papers. Whenever I got there, Boni was always smiling at me. I thought, “What’s wrong with him? He smiles too much! How is it that he is always so happy?”

One day, I was transferred to another aircraft department, the fiberglass workshop, to repair component parts of the aircraft. He didn’t see me for a few days and thought I was no longer working there until one morning. 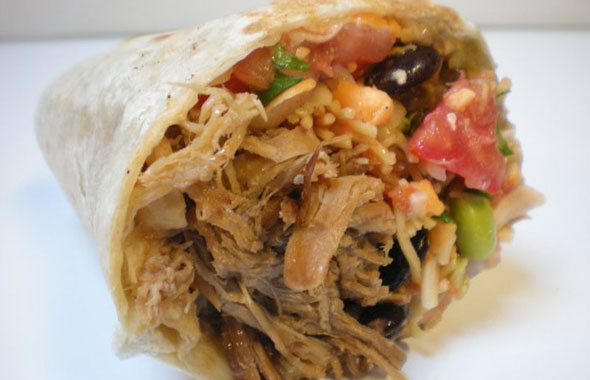 I was in a cafeteria, starving and wanting a burrito, but the kitchen had ran out. As I was trying to find something else to buy, he walked in. I thought, “Oh no, time to run!”

I turned and walked very fast, pretending not to see him. A little later, he caught up with me and started saying hello. I tried to ignore him but he kept wishing me a good morning.

“I can’t be so rude,” I told myself, slowing down and turning to him. “Good morning.”

And I kept on walking.

Suddenly, I found that we were walking side-by-side and making small talk. I really wished I had rollerblades so I could skate off.

By the time we finally reached my department, I hurriedly said goodbye and went back to work. 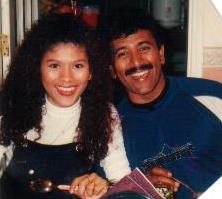 After he found out I was in my new department, he started coming in to inspect the pieces more often. He would invite me out but I always made excuses. “Sorry, I am busy.” “I don’t like to eat outside.” “No, your English, I don’t understand.”

Well, one day he came in prepared – he brought out an English-to-Spanish dictionary. What excuse could I give now? He even asked my boss if I could go out for an hour.

I eventually gave in and we went to eat Carl’s Jr. He asked me, “What would you like to eat?”

“You order yours, I order mine,” I replied.

“You pay my food, you eat double. Because I’m not going to eat that,” I declared firmly, not wanting to owe him anything.

During lunch, he kept smiling at me and I thought, “He’s looking somewhere. He’s making fun of me. Do I have ketchup on my face?”

I admit – he made me nervous. My cheeks would turn red and he would ask if I’m okay. “Mmm,” I would say, trying to quickly finish my lunch so I could return to work.

But when we finally got back, he asked, “What do you want to eat tomorrow?”

And it seemed whatever I did to chase him away didn’t work. When I went for lunch with him, I always wore coveralls. Sometimes I would make myself look untidy to turn him off, yet, he got more attracted to me.

I concluded, “There’s no running away from this guy.” 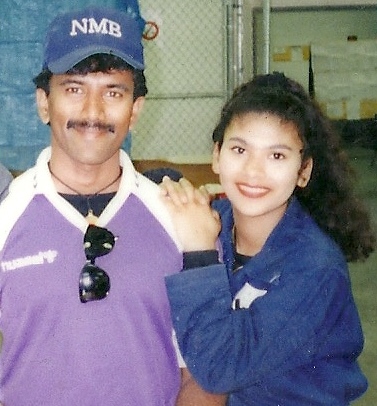 On Boni’s last day in Mexico

For the next three months, we went out and spent time together as good friends. Because he doesn’t have family in Mexico and I’m very close to mine, I once invited him to my house on the weekends. My siblings were very happy to meet him, and my brother would joke about being in-laws.

When the time came for him to leave Mexico, I was upset. I don’t have many good guy friends and he was such a nice person.

“I will call you from Singapore,” he promised me. Those calls were very expensive back then. I still remember three minutes would cost $10.

One day, my boss suggested for me to go on holiday. I decided to spend a month in Singapore. Getting there wasn’t easy – I had to cross the US-Mexican border to San Diego and take three different flights just to reach Singapore. That was the longest journey for me – I travelled for close to 24 hours.

When I reached, he was in the airport happily waiting for me. I was so happy to see him. I never felt this way with anyone before, but I didn’t want to ask him, “You want to be my boyfriend?” and I didn’t expect him to do the same. Our feelings were growing but we didn’t dare tell each other – I had to return to where I came from and his life was in Singapore.

The first few weeks in Singapore were so different– Different environment, different language, different cultures. Wherever I went, people would speak to me in Malay.

Time flew by very fast and soon I realised I had stayed in Singapore for three months! His family was all working but at least one of them would accompany me at a time. It was nice how we were both close to family. We’re also both Catholic. I saw how we had similarities but at the same time, we were opposites. We both like outdoor activities, dining, movies but also being able to sometimes hang out with our own friends away from each other. However, Boni is more cool-tempered and I am a little more hot-tempered. But like they say, opposites attract. He jokes that we are a Fire and Ice couple. 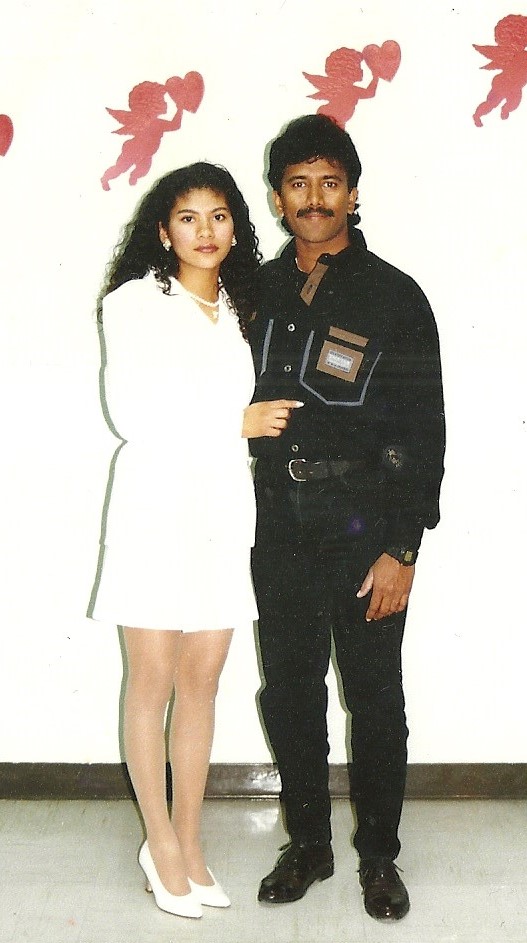 One evening, our conversation was as follows:

Him: What do you think about me?
Me: You’re a nice man, nice person, someone who really respects women and I like that very much.
Him: Do you have feelings for me?
Me: I like you but I’m not sure if I can be with you because I don’t know what being in love feels like.

(I actually liked him very much but I was so afraid to tell him because I did not want to make false hopes for myself going back to Mexico. He was always nice, kind, humble, simple. I didn’t see this in any other guy I met. I knew he was special.)

Him: What if we get married? Are you willing to live here?
Me: I can try, I can try.

He later explained to me, “Love will grow. Love doesn’t mean it’s only ‘I like you today’, or ‘tomorrow wedding then everything finish’. But it goes up and down, that’s how we learn from others.”

Honestly, I still had ambitions for my future, to pursue my own things. I wanted to continue my education, to continue working, to take care of my parents. Was this the big step I had to take? There are so many guys in Mexico and I had to choose one that lived on the other side of the world!

“Is he the one?” I asked. But no one knows. Until you are there, experiencing it for yourself. So, I decided to take the risk. I changed everything for one man. I said yes, but on one condition.

“I will marry you but not in Singapore. In Mexico.”

The next thing I knew, I was flying back to prepare for my wedding. 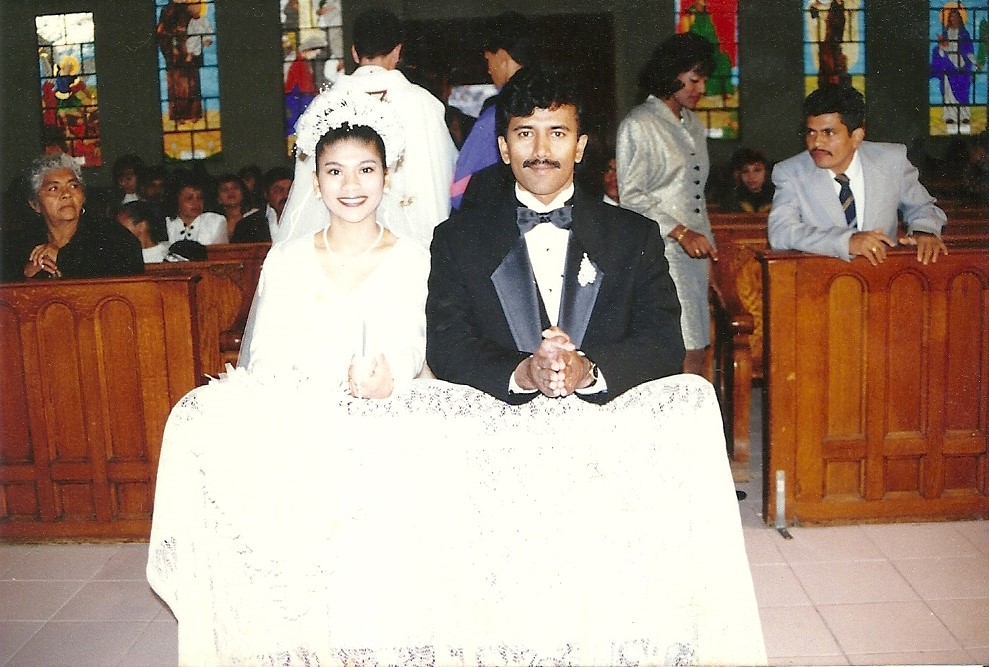 Upon my return, I told my mother, “Mum, I’m getting married.”

“What? Really? Who? You have no one!” my mum exclaimed.

“Remember the guy I told you everytime he smile? The white teeth?”

“That’s the one? But you said you don’t like him. He always disturbs you.”

Well, it’s funny to say that you don’t like someone and you end up loving them.

I made all the preparations. Six months later, I got married. The weather was horrible at the start – it was windy and there was a heavy rain. There was also road repair work going on around my area, so there was mud everywhere.

My mum looked at my white dress and panicked. I put on my black knee-high boots and held my dress. The limousine arrived late and I ended up reaching church 45 minutes later than planned.

Many people understood that the weather was bad but they also told me, “Ah Marisol, we were so worried.”

I looked up at my husband and asked, “Were you worried?”

He said, “No, I wasn’t worried. I knew you were coming. A little late, but you will be here.” 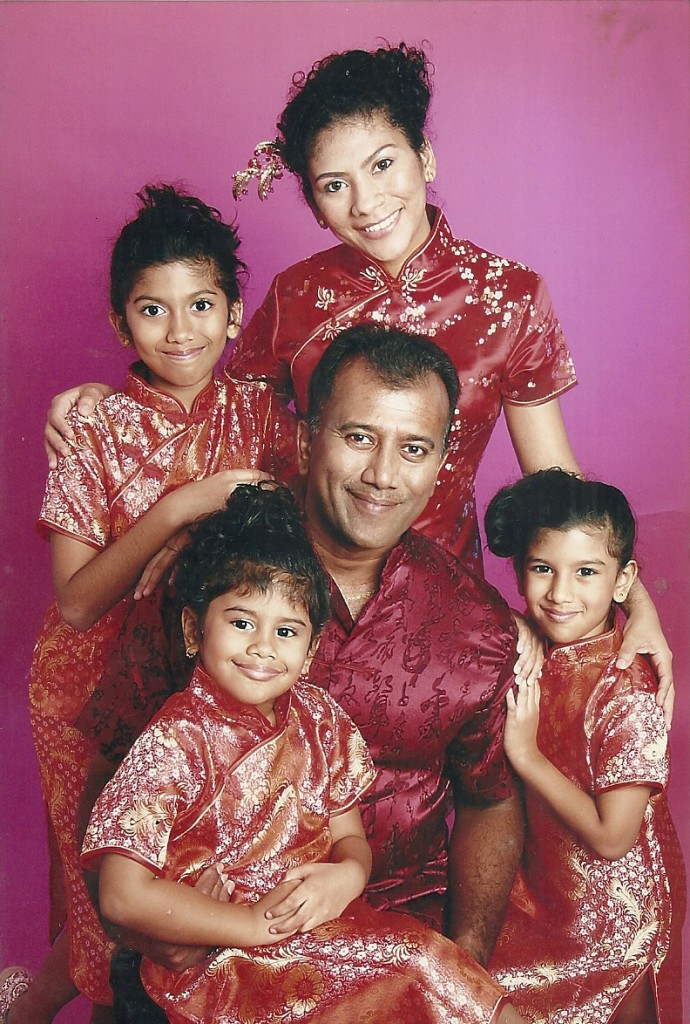 I came to Singapore a few days after getting married. Every few years, we would return to Mexico to visit my family. Living in Singapore was hard at first, but is something I adjusted to with time. Now I feel like a Singaporean eating hokkien mee, bak kut teh, prata…

I try to balance my life too. I’m not just a housewife that cleans the house but I also do sports and exercise. I’m very active and my husband’s even more so. He’d tell me, “I’m fetching you later, let’s go for a drink or go clubbing.” 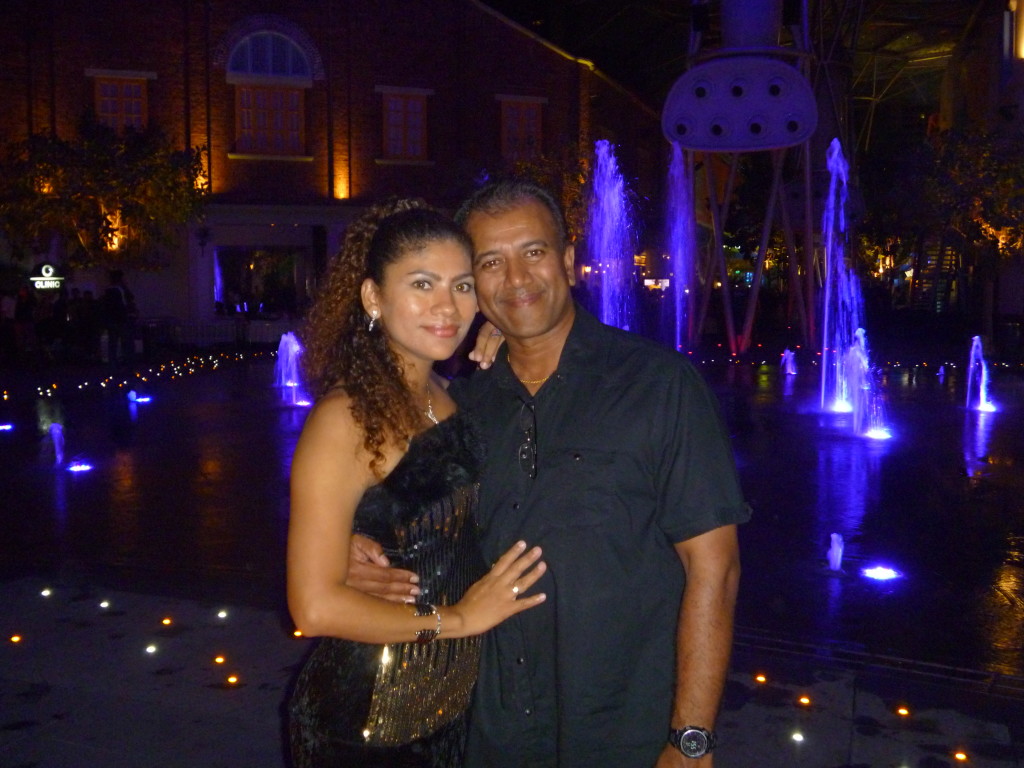 Sometimes though, I want to spend time with my girls at home. I have three daughters now, aged 16, 13 and 11. We give time to the girls as a family, but we also make time for ourselves. 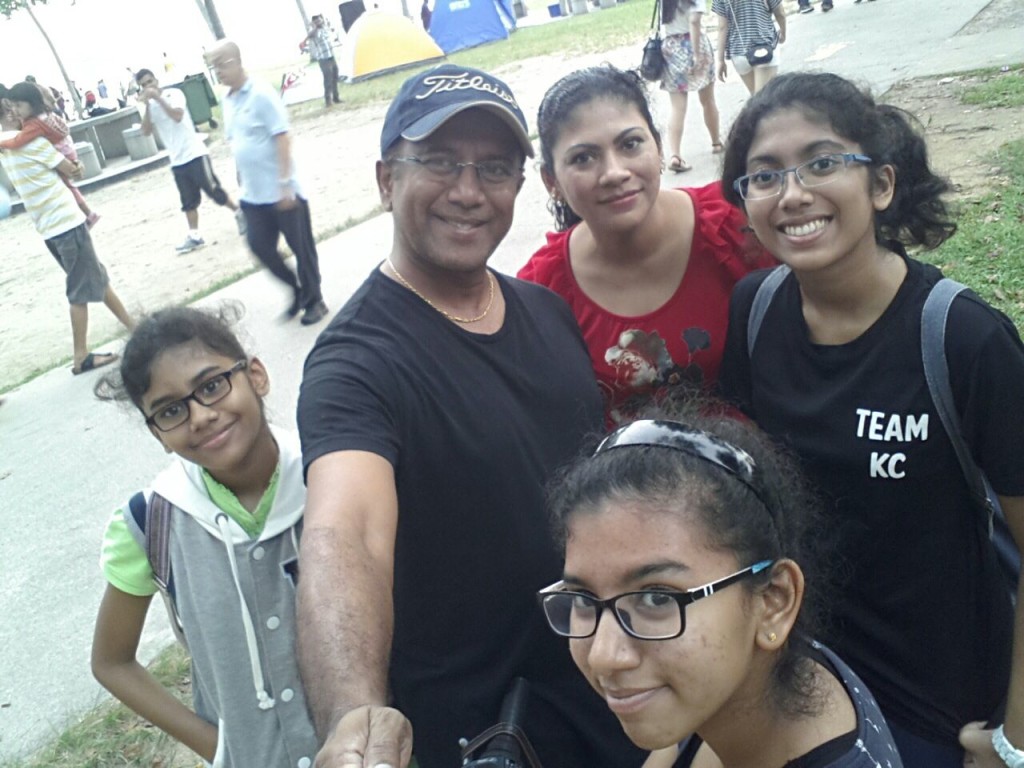 We need our individual space even as a couple, which is what many people forget. We cannot always continue to multitask. By having some space, we can have some balance in keeping ourselves and the family happy always.

What happened with Marisol certainly is sweet. While not all of us will end up with a fairytale romance, we will have a relationship that is uniquely our own. As long as you love someone, you have a story. And no two love stories are exactly the same.

How did you meet your other half? Let us know in the comments, or write to us at catchus@gobeyond.sg!