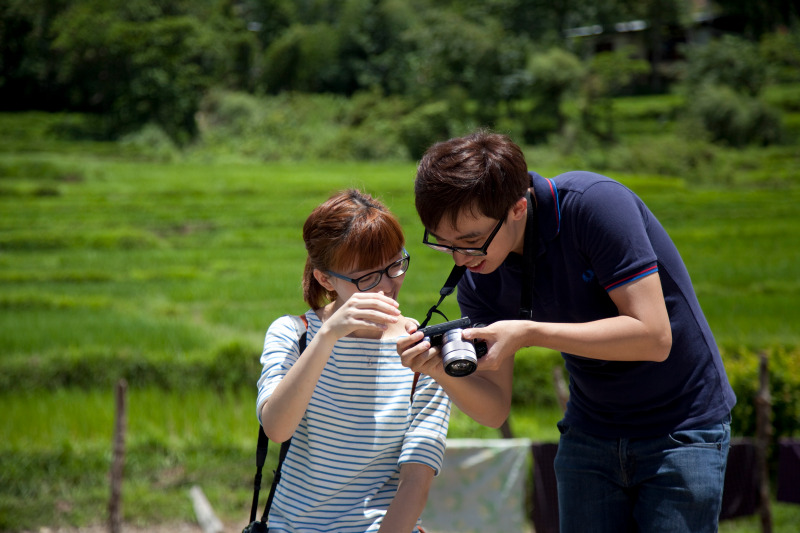 This week, we continue with the second part of the series featuring Jian Xuan’s experience in Bhutan where he talked to us about the unique Bhutanese culture. In this interview, he reveals to us one word that connects the culture of Singapore with the Himalayan state.

Were there any interesting aspects of the Bhutanese culture?

They have to wear their national costume every day. It is the rule. I think you can only remove the top when you are indoors. So you rarely see anyone walking around in Western or casual

clothing. Some do. I think they can but if they get caught then they will have to pay a fine. Anyway, I feel that they all looked very nice in their national costume so I do not really see a point for them not to wear it.

Is there a reason why they are required to wear the national costume?

Besides making their people wear the traditional costume, are there any other things that they do to protect their culture?

Yes. They have this thing called Bhutanese Folk Tales, which my friend did a story on. It is about how they pass down their Bhutanese fables and tales through oral tradition. You can read my friend’s story. It is very well written.

So what else do they do? I know they do a lot of things to protect their culture. Oh, there is no McDonalds, zero. No Starbucks, kosong (none). Not even in the capital. You can find Western food if you look really hard but it’s almost impossible.

Why is that so?

They don’t allow MNCs to set up plants or offices easily. You have to really show them that you are in Bhutan to participate in sustainable development before they let you in. That is because they do not want people to ruin their rivers and their forests. That is one thing about the Bhutanese people; they are all very connected with nature. They love their rivers, their forests and their mountains. You cannot even fish in their river, it is considered sacred because life is sacred, so you cannot fish because when you fish, you will kill the fishes.

So, there are no foreign “brands” at all?

There are a lot of Indian brands.

What are some of the Indian companies in Bhutan?

I think I saw Tata Motors. Tata is a big Indian company, and they have a branch in Bhutan. What other brands did I see? Their toilet bowls are Indian-made but I do not know what is the brand called [laughs]. There are mainly only Indian companies in Bhutan because there is a lot of goodwill between the two governments.

Oh and one more interesting thing, you can put it in! They use ‘la’ but their ‘la’ is formal. For example, if I were to address a Minister or an officer of a very senior rank, I would say something and then add a ‘la’. It is polite to do so. So there was a lot of confusion when we met the Bhutanese because they were wondering why we kept using ‘la’. So they ask us if we use ‘la’ also. We were like yes, we do but we use it informally between friends, so the context when we use ‘la’ is different.

So you just add ‘la’ at the end of a sentence?

Yes, when you want to be polite. For example, when you thank someone you say “thank you la” in Bhutanese.

[Thank you, la, for reading! Read the last part of the interview here.]