“Give me your best price,” Siba says commandingly. Siba is my best friend in Arabic class. The two of us make a formidable German-Singaporean tag team who meet up on weekends to conjugate verbs and write mini-essays.

Siba works in The Emirates Group’s tour operations, and is always horrified to hear of my Arabian misadventures. “Why don’t you ever ask me?” she says crossly, when I tell her about my lacklustre desert safari with the downtrodden camels, and my sexual harrassment-ridden trip to Al Ain. Disgusted at my experience with Rayna (“They didn’t have a licensed tour guide on the bus? That’s illegal!”), she lands me a discounted spot on a Musandam Tour during the upcoming Isra’ wal-Miraj public holiday.

I get up at the crack of dawn and crawl into Khasab Travel and Tours’ waiting tour bus. The driver, Mudassar, is Omani, a native of Khasab, and fiercely proud of it. He brags about his homeland, a place of natural marvels that is nothing like Dubai’s cityscape of sand, steel, and fake Arabian villas.

We swap questions about stereotypes. He wants to know why the last time he cooked Singaporean noodles, they were very hard; and I want to know if it is true that all Omani men own bejeweled khanjars (a curved dagger) and if there is an age limit on purchasing them.

Mudassar is also very enthusiastic about fish and fishing. He disapproves of Dubai’s law that one can only fish if one has a license, as people are free to fish wherever they wish all across Oman. He tells me that everyone in Khasab knows how to fish, and that I should learn as there is nothing better than eating a fish fresh from the sea.

The 2.5-hour journey flits by as we chat, and before I know it we are in rugged Ras al-Khaimah (RAK), with its rocky roads and sandy shores. We pick up a busload of German tourists and head straight for the border. In stark contrast to the sparse Dibba crossing, the RAK crossing consists of a pair of actual standing buildings, with air-conditioning and BATHROOMS. We breeze through the checkpoints, and then my jaw drops as we set out along the beachy road to Khasab. 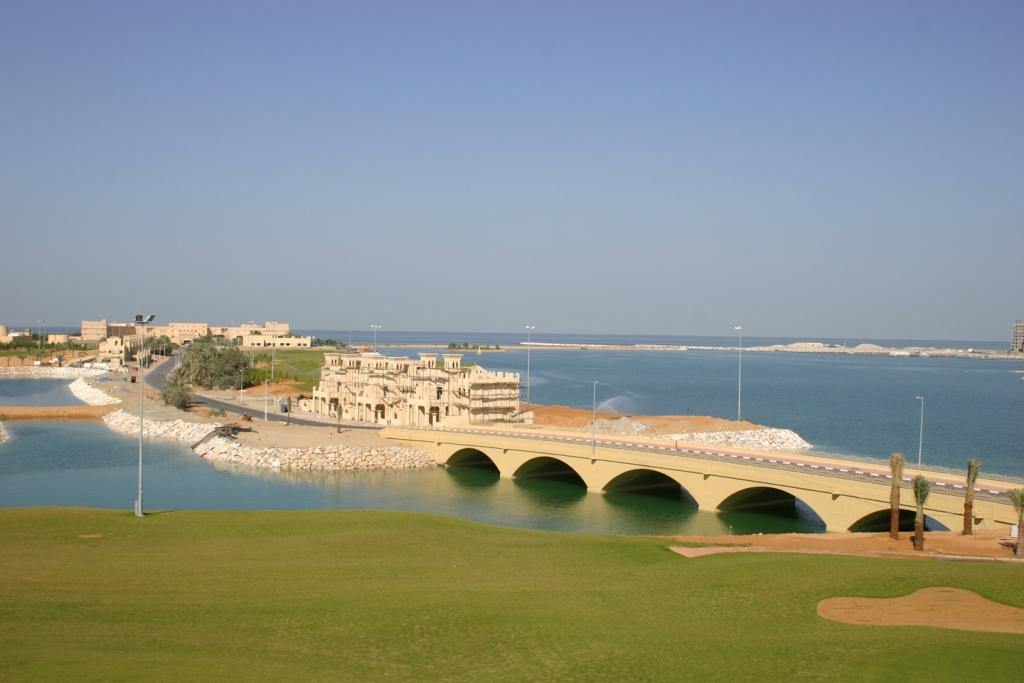 The rocky fingers of Musandam’s mountain range curl tightly around the coast, the bay glistening in its midst like a fistful of diamonds. As we thread our way through the winding mountains, a light mist drapes itself over the waiting dhows bobbing patiently in the sea. We startle flocks of sea birds as we round the curve of the beach and they take flight, sending ripples of turquoise and blue sweeping towards us. Mudassar is right. I have entered another world.

“Herzliche Willkommen!” announces the tour guide as we board the boat, arms extended in welcome. Siba has booked me onto a German tour. And I thought O-Level German would be of little practical use after secondary school. Thanks to the MOELC, I can understand 70% of the tour guide’s commentary and chat with my fellow passengers.

We cruise among the griddled fjords, craning our necks for a first glimpse of dolphins. Before long, a crew member lets out a shout as a shiny wet snout breaks the surface of the water. 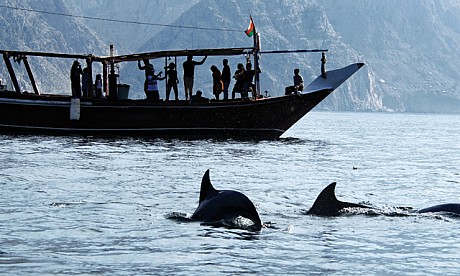 Led by our tour guide, we clap and whistle in order to attract the dolphins’ attention. They do not entirely leap free of the water as Sea World and Captain Planet would have us believe. Instead they race playfully along the boat like a pair of gray and silver discs, vanishing abruptly at times only to reappear at the other side of the hull. “They like to joke with us,” explains our tour guide. The pair of adults is soon joined by a third dolphin, a half-grown calf as mischievous as its parents.

Eventually, we leave them behind to drop anchor at Telegraph Island, where the British used to send telegraphs to London through massive submarine cables that linked the outpost to Karachi. 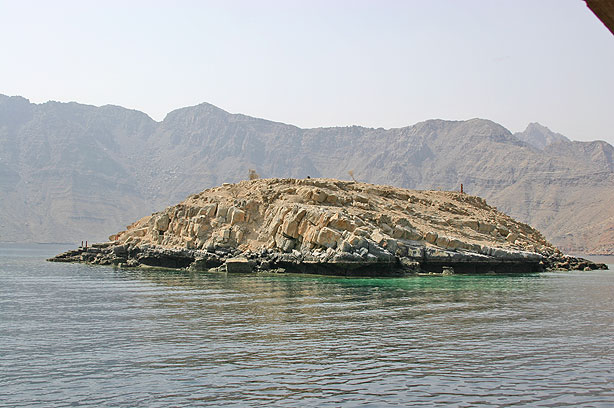 The hour we are given to sample the waters of Musandam evaporates in a sundrenched haze as I float languidly around Telegraph Island. I hear a distant dhow start its engine and jerk awake, brushing my right arm and foot painfully against the rocks as I hurry back.

As I haul myself onto the deck, I realise my right foot is a little numb. I turn it upwards to check if I am bleeding from the rock I scraped against. Instead, there are several angry black spikes embedded in my heel. I have stepped on a sea urchin.

The crew materialises with a first aid kit. They begin to dig the largest and most protrusive of the spines out of my flesh with what looks like an oversized drawing pin.

The pain is blinding. I bite back tears, but a few escape. The Germans crowd around me, making soothing noises and offering me drinks. By the time the crew has extracted the quills that were closest to the surface of my skin, the sole of my foot is streaked with blood and pus.

I am given a VIP seat next to the helmsman to nurse my foot, and we follow a pair of decidedly less friendly dolphins to our next stop, Seebi Island. 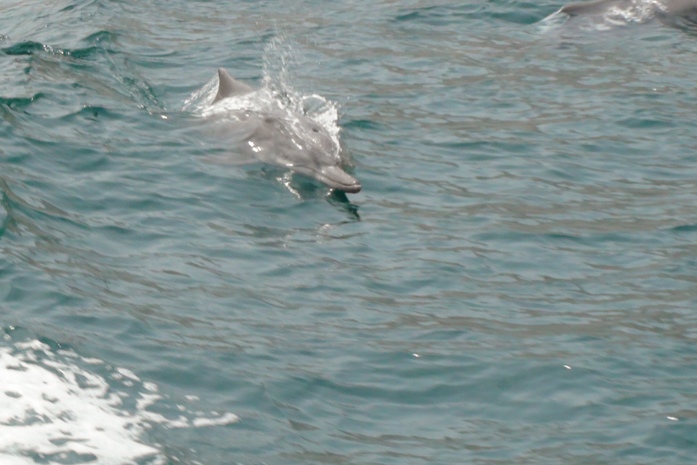 Our tour guide tosses chunks of chicken and bananas into the impossibly blue waters, upon which a frenzy of brightly coloured fish dart out of the crystal depths, clustering around the sinking morsels.

Unwilling to swim too far this time, I drift lazily in a circle with some of the Germans, who are fascinated to hear that I am young, alone, and in the Middle East. “Yes, if I were your age, I would be travelling all around the world,” says one lady enviously. “Now? I am too old. Just leaving Europe makes me tired.”

I board the boat to use the bathroom and when I emerge, I see that the Germans have gathered at the foot of the ladder, listening raptly as our tour guide performs some kind of show and tell. He turns and dangles the object he is holding in my face. It is a sea urchin. I recoil dramatically in horror and the Germans laugh. He puts it in the palm of my hand, exposing fleshy innards that blink and curl away “It looks so cute,” says one of the Germans. “It looks delicious,” I say vengefully. 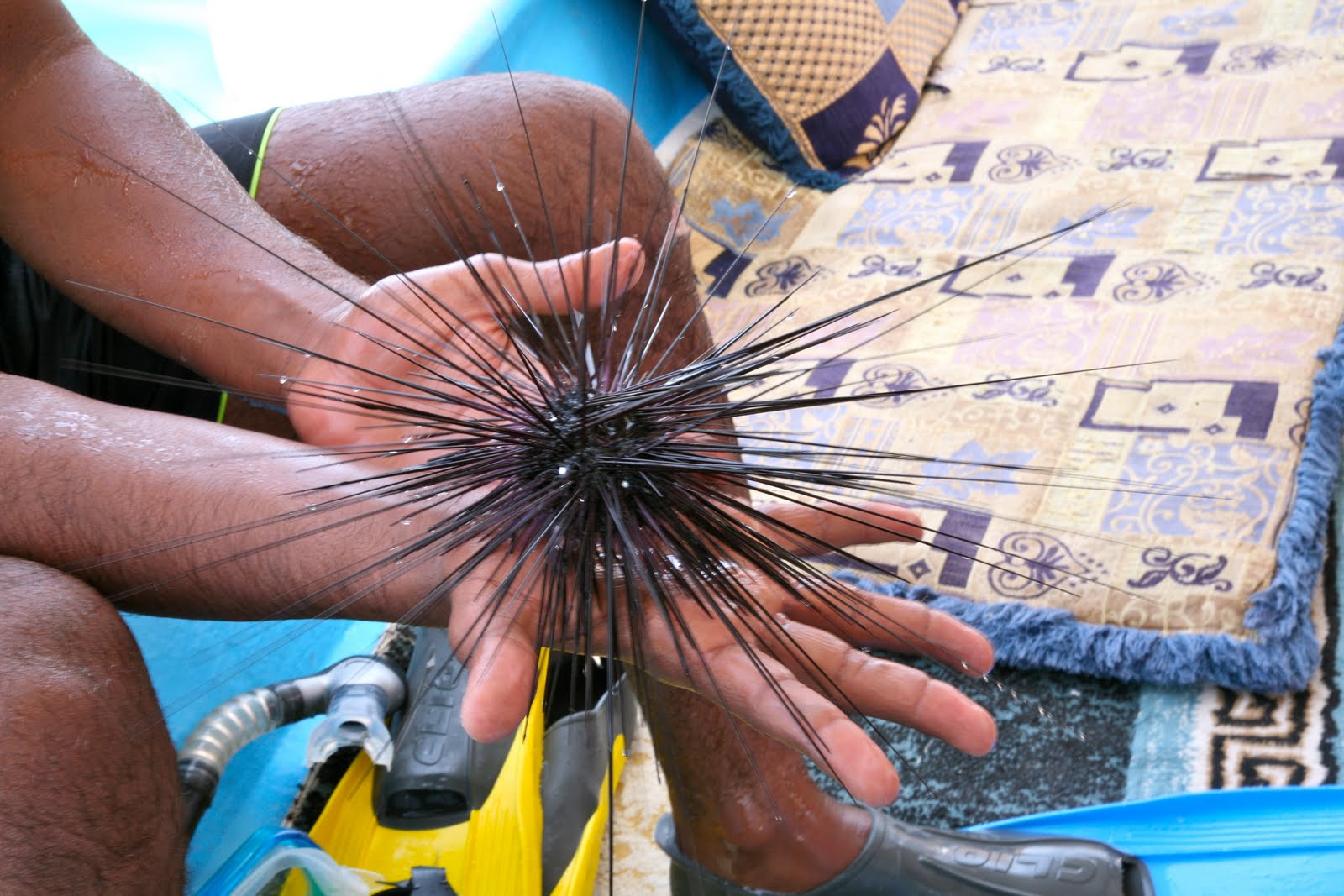 The route back to shore is as dolphin-free as a can of ethical tuna, but no one minds. We recline on the cushions, drinking in the late afternoon sun as the dhow skips across the sea, throwing up a salty spray. It settles in my ears, on my cheeks, and on my lips, and I take it home with me.