Coconut palms provide people with food, drinks, shelter, shade, utensils, wood, medicine, material for toys, baskets, cooking oil, brooms, rope — and all these things merely from a coconut tree and its fruit. This is why coconut palms have always been absolutely essential amongst islanders. But how did they even ever come about?

Let me tell you a story about a time where the pioneer batch of Maldivians lived before coconut palms were discovered.

A long time ago, the first batch of people who arrived at the Maldives spent their days struggling to feed themselves, build homes, and find material. They were barely surviving on the islands because there were no coconut palms — the solution to all their problems.

With each day, people starting dying, leading to death in great numbers.

However, among these Maldivians lived a great faṇḍita man (male sorcerer). He was filled with anguish seeing so many islanders die every day. He feared that the islands would become depopulated, thus he was determined to do something to save the islanders. After much research, he prepared a secret magic mixture found in his books. He then took the mixture and went to the graveyards. Before the burial of the bodies, he put a bit of the mixture in the mouth of every dead islander.

Before long, out of the mouth of every buried skull came a green shoot that grew into a young coconut palm. As time went by the trees began to grow. They were of different shades and heights, depending on the corpse from which they had originated.

Soon, the islands were covered with coconut trees.

Although not many were alive to witness this, the great faṇḍita man taught the survivors how to make use of every bit of the coconut palm and its fruit. The population then started to increase again, with the islanders finally knowing how to sustain themselves thanks to the coconut palms.

From then on, islanders no longer had to worry about the future. They made it a point to set aside some coconuts from every palm to plant new trees, so that they could gift the coming generations with the coconut palms they have planted.

When the husk of a coconut is removed, one can still see three holes that make up a face. Two holes are the eyes and one for the mouth — the hole of which a coconut shoot grows out of. 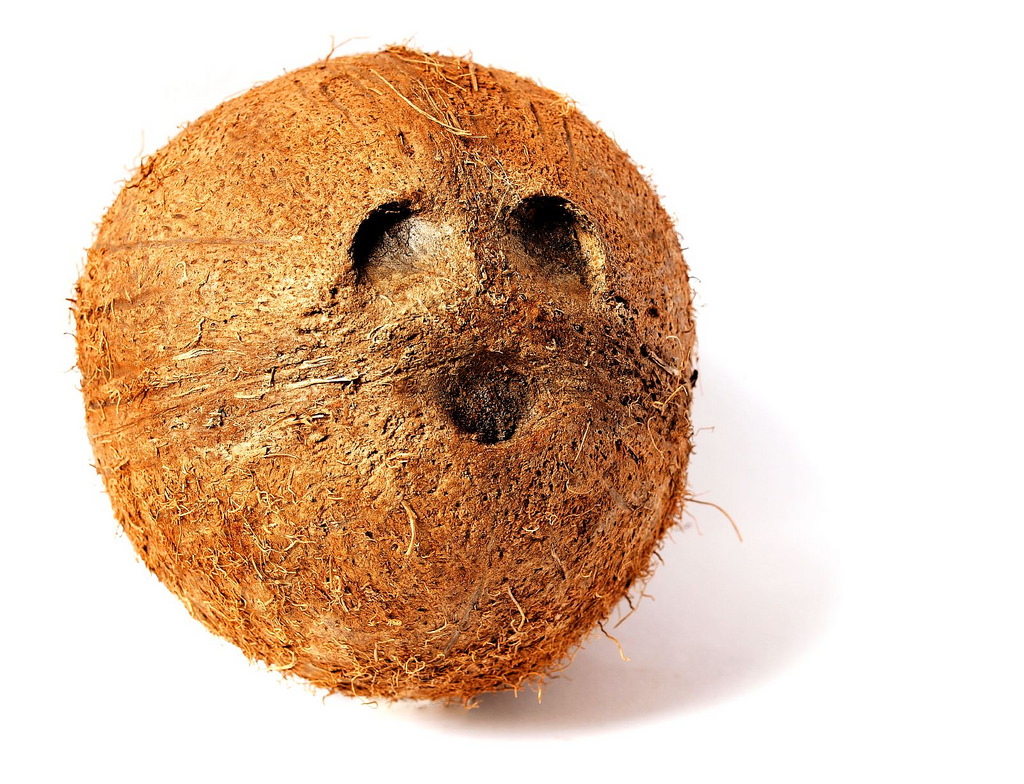 Survival would not have been possible for the first Maldivian ancestors if not for the coconut palm. Thus the coconut palm — known as ‘Dhivehi ruh’ (Maldivian palm) by Maldivians is positioned in the centre, honoured in the Maldivian National Emblem. 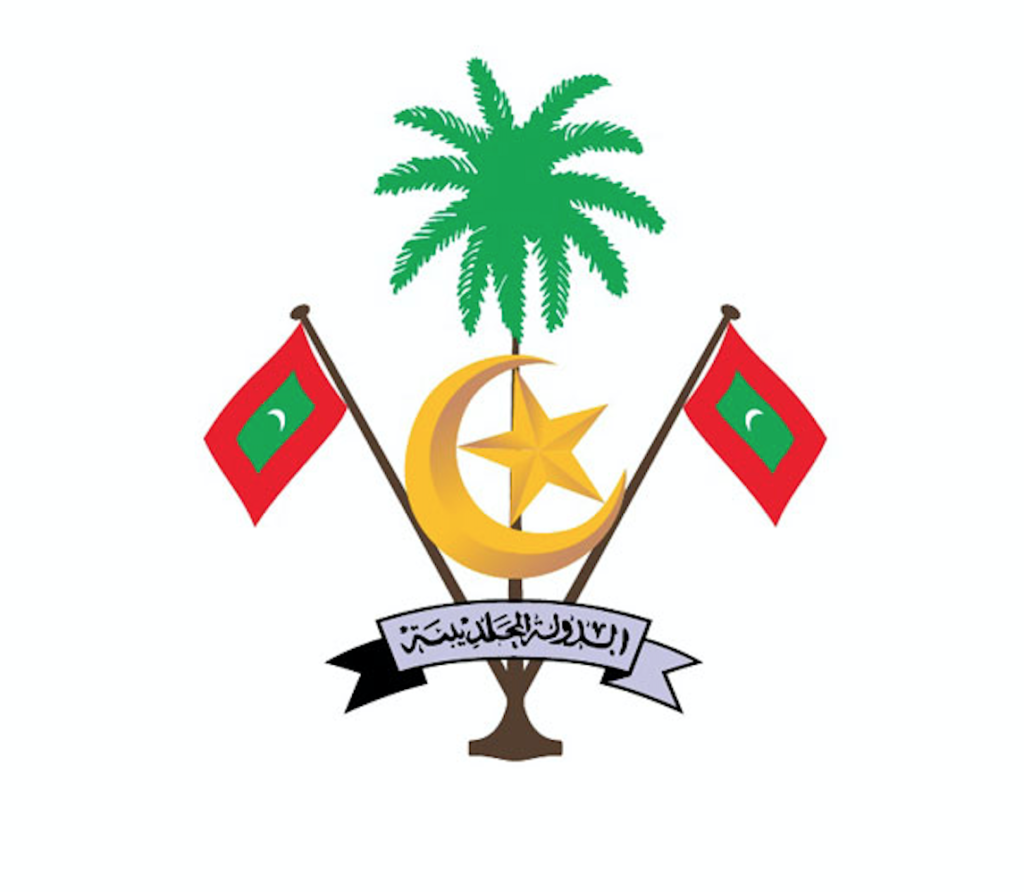 It is said that there is a man living in the middle of the ocean.

He does not belong anywhere. He does not own a house nor does he belong to any country. This man has been wandering across the oceans for many years, riding on the back of a whale, holding onto its back fin.

The whale and the man are best friends and they are never apart. The whale is always careful in keeping close to the surface of the water so that the man can breathe. If it senses danger it will go under, emerging quickly after knowing that the man could die if under for too long.

The man who lives on the whale eats only raw fish and catches tuna with his bare hands. He follows the Frigatebirds (seabirds that are found across all tropical oceans) in the sky to lead him to schools of tuna in the ocean, where the whale helps him catch the fish by using its tail to thrash the tunas. The man then grabs the tunas and eats them by tearing the flesh with his claw-like long fingernails.

No one has ever clearly seen the lower part of the man’s body. Maldivians have said that this is so as it has been submerged for so long, where from waist down, his skin is pale and covered with barnacles and seaweed.

Many fishermen in the Maldives have claimed to have seen the man on the whale. However, once spotted, the whale will dip and swim away rapidly. It will then only appear once again when at a great distance from people.

Sketch of the Man on the Whale —   Photo Credits: Folk Tales of the Maldives   by Xavier Romero-Frias

3. The Dōni Given to Mohan

Once upon a time, a beautiful freshly-built boat (boat is known as “dōni” in the Dhivehi language) was parked at the Malé harbour.

Amongst those who saw it was a man named Mohan. The owner of the boat randomly called him and as he needed someone to help keep watch of the boat while he had to settle some business on the shore. Mohan, who was living an idle life, agreed and stood on the boat to guard it, making sure that no one climbed aboard to steal anything.

Amazed by the beauty of the boat, a passerby saw Mohan and said, “How beautiful is your boat!” Having been a pauper his entire life, Mohan was surprised that anyone would think that the boat belonged to him. He then bragged to the next person who came along saying, “This is my own boat,” to check if others would believe him too.

Most people took his statement as legitimate which made his pride swell.

Later on, more people came by to admire the boat and Mohan continued showing off, telling them that he owned the boat. If anyone happened to ask how he got it, Mohan said, “It has been given to me.”

After a long time, the owner returned. He said that he would keep watch of the boat himself, and told Mohan that he could leave if he wished. Mohan understood and went home, but he had already told so many people that the boat belonged to him that everyone believed him and word had spread. Nobody bothered to clarify the truth and from time to time, many people still referred to the boat at Malé harbour as “Mohan’s boat.”

This is how the saying “Mohanah dōni din hen” (like the boat given to Mohan) came about.

It can be used in two different ways — Either uttered in contempt about an average person who pretends to be the one in command, or used for when an undeserving person gets credit for something, stealing the rightful person’s recognition.

4. The Land Crab in the Kitchen

Land crabs were once common in the Maldives. Unlike other crustaceans, they do not live in the sea, but instead they live on land. Land crabs are curious and more active at night. They are usually unbothered when entering a house regardless of human presence. They enjoy hiding in corners, and under or behind furniture.

A long time ago, all land crabs in the Maldives were said to be were fair in colour. But, one day, a land crab entered the kitchen of a woman who was boiling palm syrup.

She was Dōgi Āihā Kāṅlēge. A beautiful, strong, and very powerful sorceress. She was so tough that instead of using firewood to fuel the flames, she would use her bare feet to shove the pot from beneath to keep the wood inside churning. Dōgi Āihā Kāńlēge had made a rule that no one was to enter the kitchen while she was cooking, not even her husband.

Unaware of Dōgi Āihā Kāṅlēge’s strictness with having another person or creature see her cook, the crab entered the kitchen attracted by the smell of her cooking.

Creeping stealthily along the doorway of the kitchen, the crab did not notice the pair of furious eyes which had already noticed its presence. There stood Dōgi Āihā Kāṅlēge at the fireplace, with her left foot still on fire. Closing in on the crab, Dōgi Āihā Kāṅlēge stepped on the crab’s shell with her hot and fiery foot. Her movement was so swift that the crab did not manage to escape! Only after she saw that the back of the crab was burnt, she decided to let the crab go.

As it happened to be raining heavily outside, the fire on the crab’s shell was quickly extinguished. But the large black stain where it had been burnt by Dōgi Āihā Kāṅlēge’s foot never went away.

This is the story of why Maldivians believe that all land crabs in Maldives have a black spot on their shells. 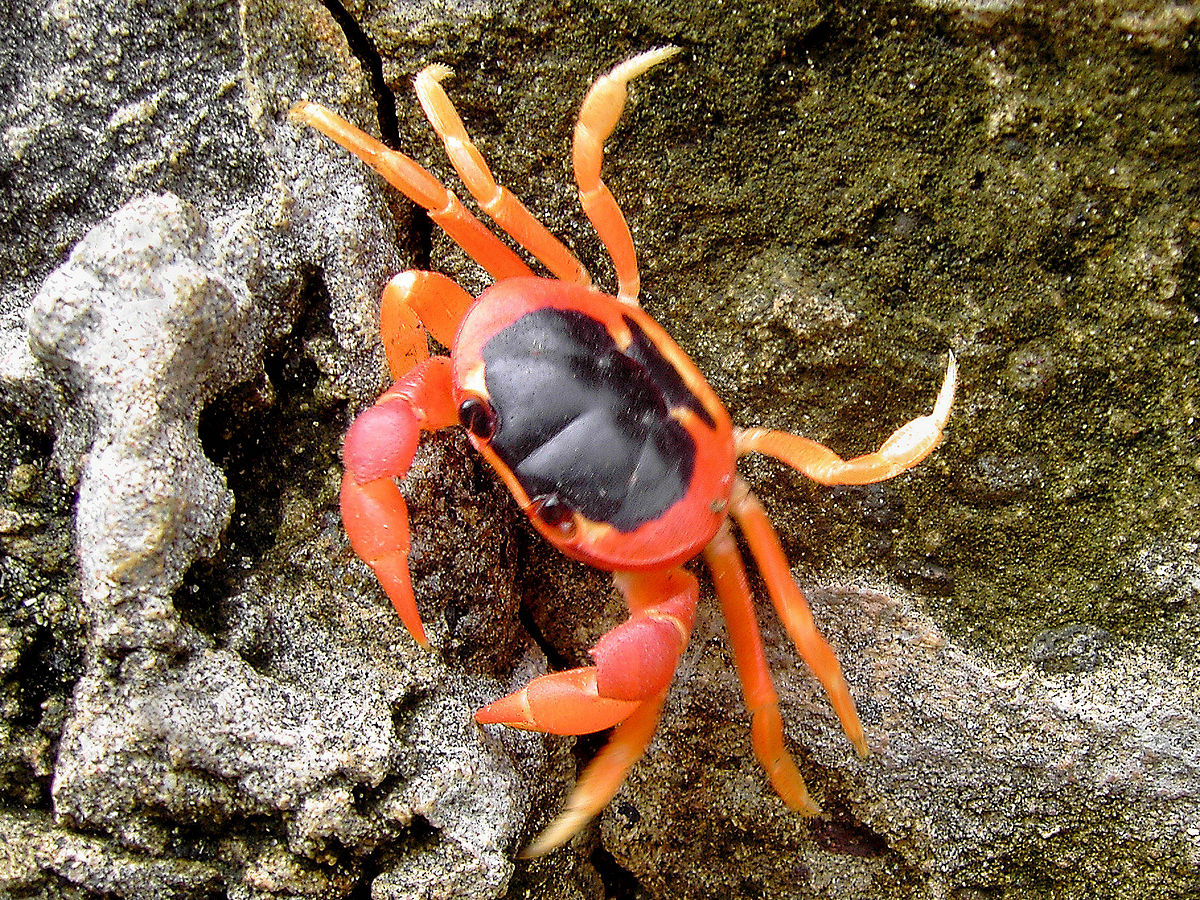 Long, long ago on the edge of Fua Mulaku Island, at a place called Arruffanno, a monster emerged from the sea at night. Some people who were catching fish along the coral reef saw it. They said that the monster looked like a huge, pale flame.

The monster could change its shape and would creep ashore every night. It would travel to the populated areas of the village to kill villagers and drink their blood. It kept returning, resulting in the deaths of many men, women and children.

This struck a great sense of fear in the inhabitants of Diguvānḍo, the village nearby, for they were afraid that the island would become deserted. It was becoming a crisis.

None of the villagers had the means to stop the monster, so Edurutakkānge Muhammad Dīdī, a big faṇḍita man, took it upon himself to stop it and save the villagers from the murderous creature.

He spent many days making magic along the reef. Although he worked very hard at it, casting different spells nightly, the demon still returned to quench its thirst for human blood. The failure of his sorcery made him desperate. This was when Muhammad Dīdī made a final decision, a decision to garner all his magic into casting one last, very powerful spell.

Alas, it worked and it turned the monster into a huge coral rock.

Today, this rock can still be seen at Arruffanno in the western shore of Fua Mulaku. The locals call it Ferēta Gal, which means the Demon Rock.

It is said that when you hit the rock with an iron rod, it still oozes blood, and will continue to do so forever. 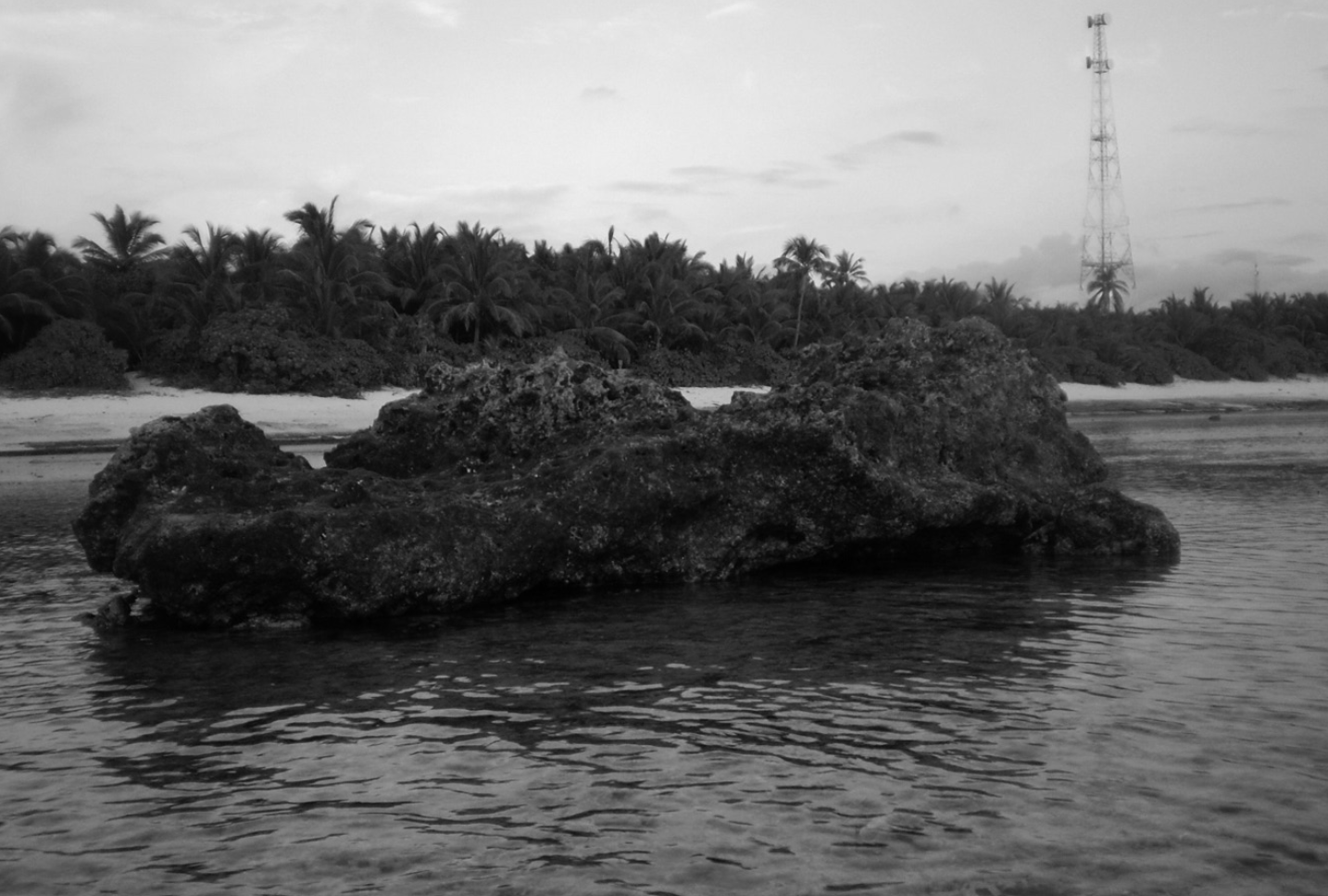