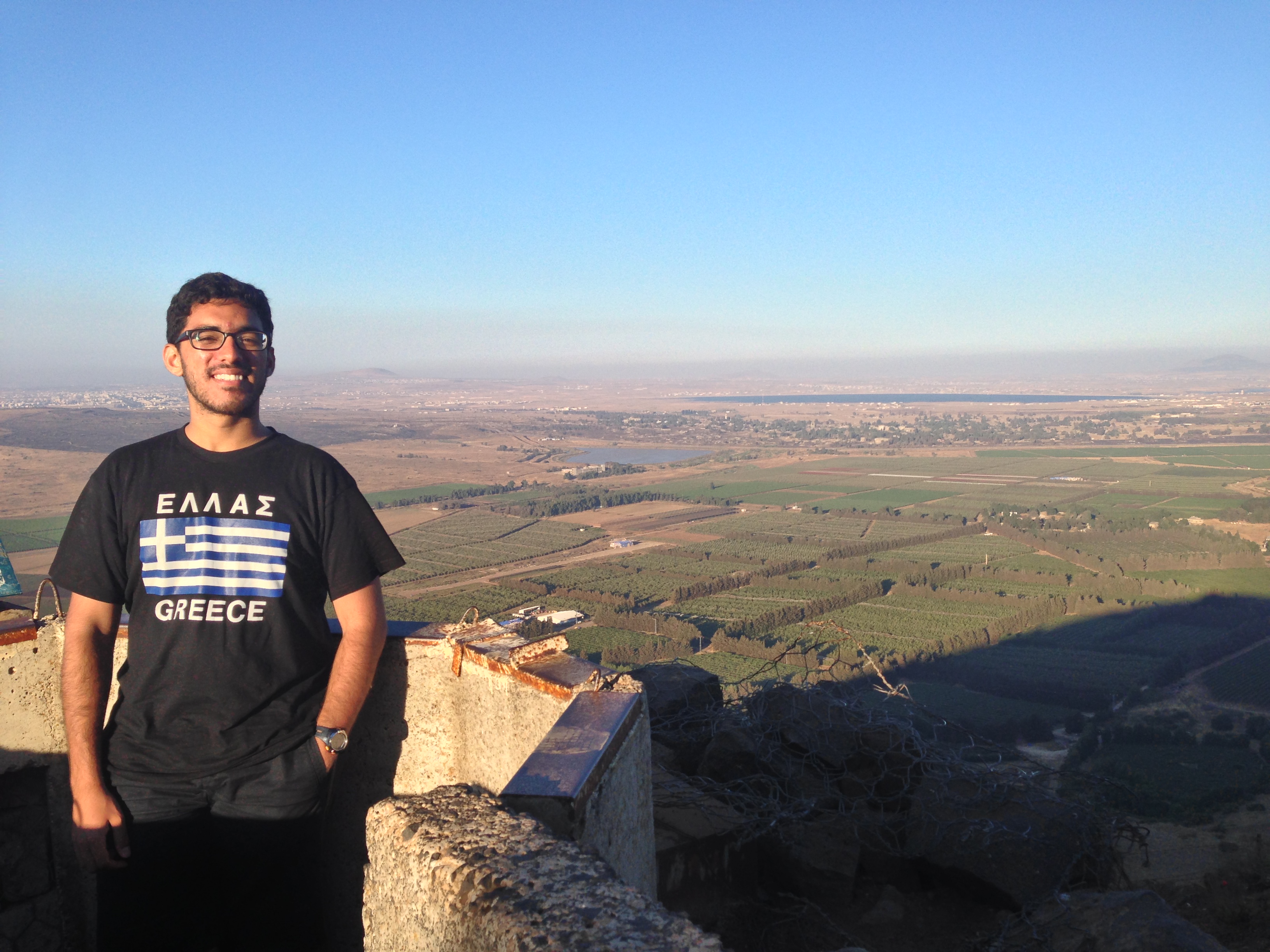 Kirk at Mount Bental (part of the Golan Heights), with the land of Syria in the background

After spending 4 weeks in Israel and returning to Singapore, many of my friends have asked me, “How was Israel?” Each time this has happened, I’ve been at a loss for words, not because I don’t have anything to say, but because I have way too much to share!

The world may be deeply divided in its opinion on Israel’s borders and the question of Palestinian statehood, but I daresay that there’s consensus on one point – Israel is truly an exceptional country.

Getting the Lay of the Land

The best way to begin a description of the uniqueness of Israel is to start with a big-picture overview of the land. The geography of Israel is truly fascinating.

Within this narrow strip of land between the Jordan River and the Mediterranean Sea, there is a wide array of climatic conditions, with snow-capped mountains in the north, hot and humid weather along the coast (Tel Aviv feels a lot like Singapore), hot and dry conditions in Jerusalem and scorching hot desert in the south.

The Sea of Galilee (also known as the Kinneret or Lake Tiberias) is the largest freshwater lake in Israel and a vital source of water for the country, especially for the desert regions. Water flows from the Sea of Galilee through the Jordan River to the Dead Sea in the south. 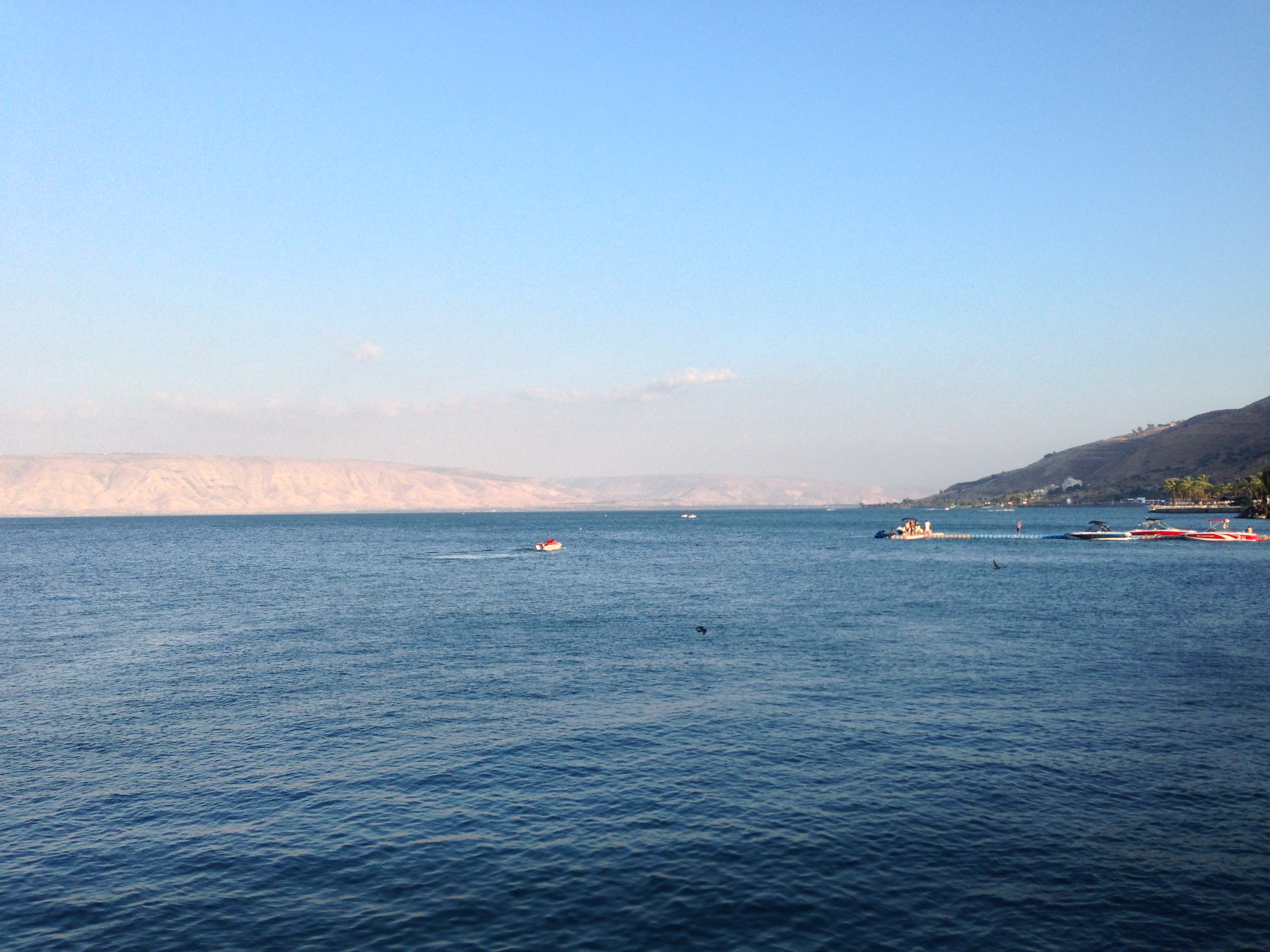 The Dead Sea is the lowest point on Earth. As such, water flows into this lake but does not flow out anywhere, so that water is lost primarily through evaporation, creating a hypersaline lake that cannot sustain life.

The water in this lake is nearly 10 times as salty as ocean water, which is why people float so easily in the water. (The super salty water also burns every wound and cut on your body, no matter how small, so swimmers need a high tolerance for pain!) 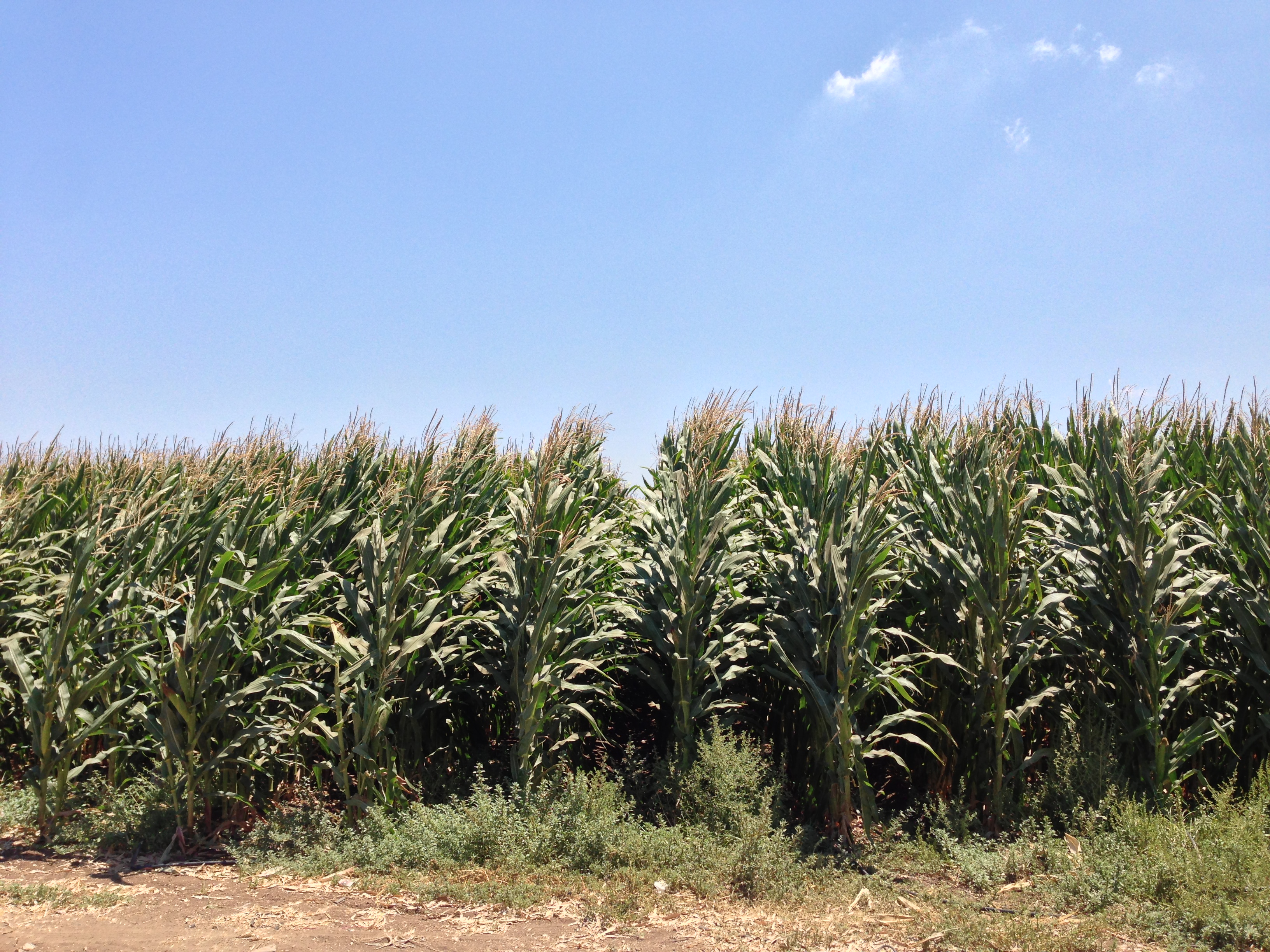 Beside these water bodies (and, of course, the beaches along the Mediterranean Sea), there is much to see on dry ground. Driving in Israel is a delightful experience. Your ears pop as you navigate through the undulating terrain of the land.

In the north, you see sprawling fields of corn, grape vines and magnificent flowers – all in the desert! In the south, you see bright orange sand dunes for miles and miles on end. As the sun sets in the evening, the sight of blue mountains against an orange skyline is simply enchanting. Israel is a very colourful place indeed. 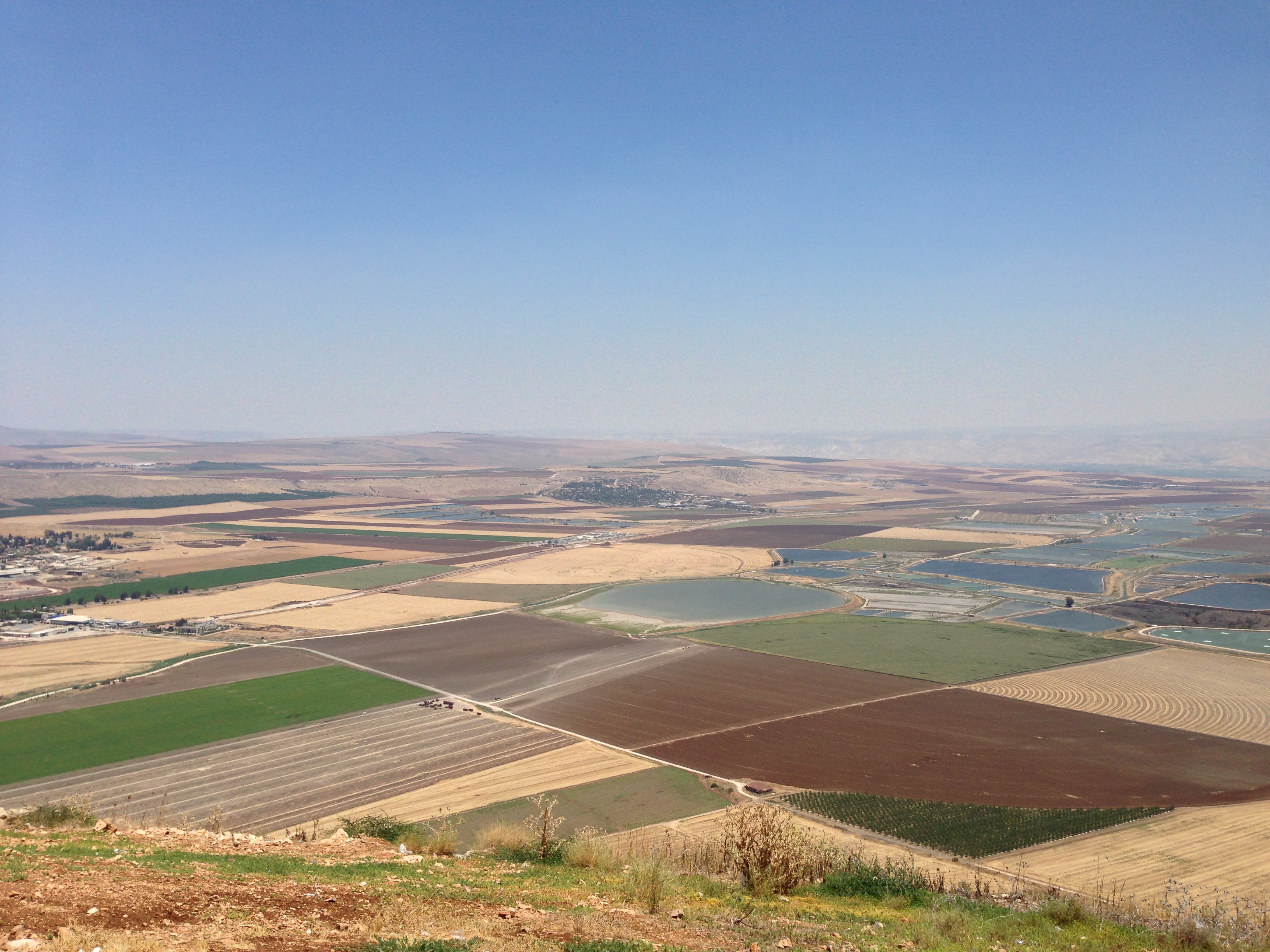 Farm land in Israel. The blue sections are fish farms!

Diversity, Even More So Than Singapore!

In fact, Israel is colourful both literally and figuratively. If you think Singapore is a diverse nation, Israel is in a league of its own.

There are Jews of many different nationalities in Israel (over 100) as a result of the Diaspora, including German Jews, Russian Jews, British Jews, American Jews, Canadian Jews, Ethiopian Jews, Yemeni Jews, Algerian Jews, Lithuanian Jews, Polish Jews, Bulgarian Jews… the list goes on.

Each group has its own history in the Diaspora, traditions, cuisine, costumes and, of course, language. It’s quite common to find Jews speaking Russian, French, German, etc., in addition to Hebrew and English. This picture doesn’t even include those who are not/do not consider themselves Jewish – Arabs, Armenians, Asians (I saw Chinese, Indians, Filipinos, Thais and Indonesians in Tel Aviv), Sudanese refugees, etc.

Nationality/Ethnicity is just one way to dissect Israeli society.

There is extraordinary religious diversity too. Amongst the Jews, there are Reform Jews, Conservative Jews, Modern Orthodox Jews (religious orthodox Jews who embrace modern education, mass media, etc.) and Haredi Jews (the ultra-Orthodox who reject modernity and devote their lives studying the holy texts of Judaism). There are also the Christians, the Sunni and Shia Muslims, the people of the Baha’i faith and the people of the Druze religion (a sub-sect of Islam that adopted many Hellenistic beliefs). 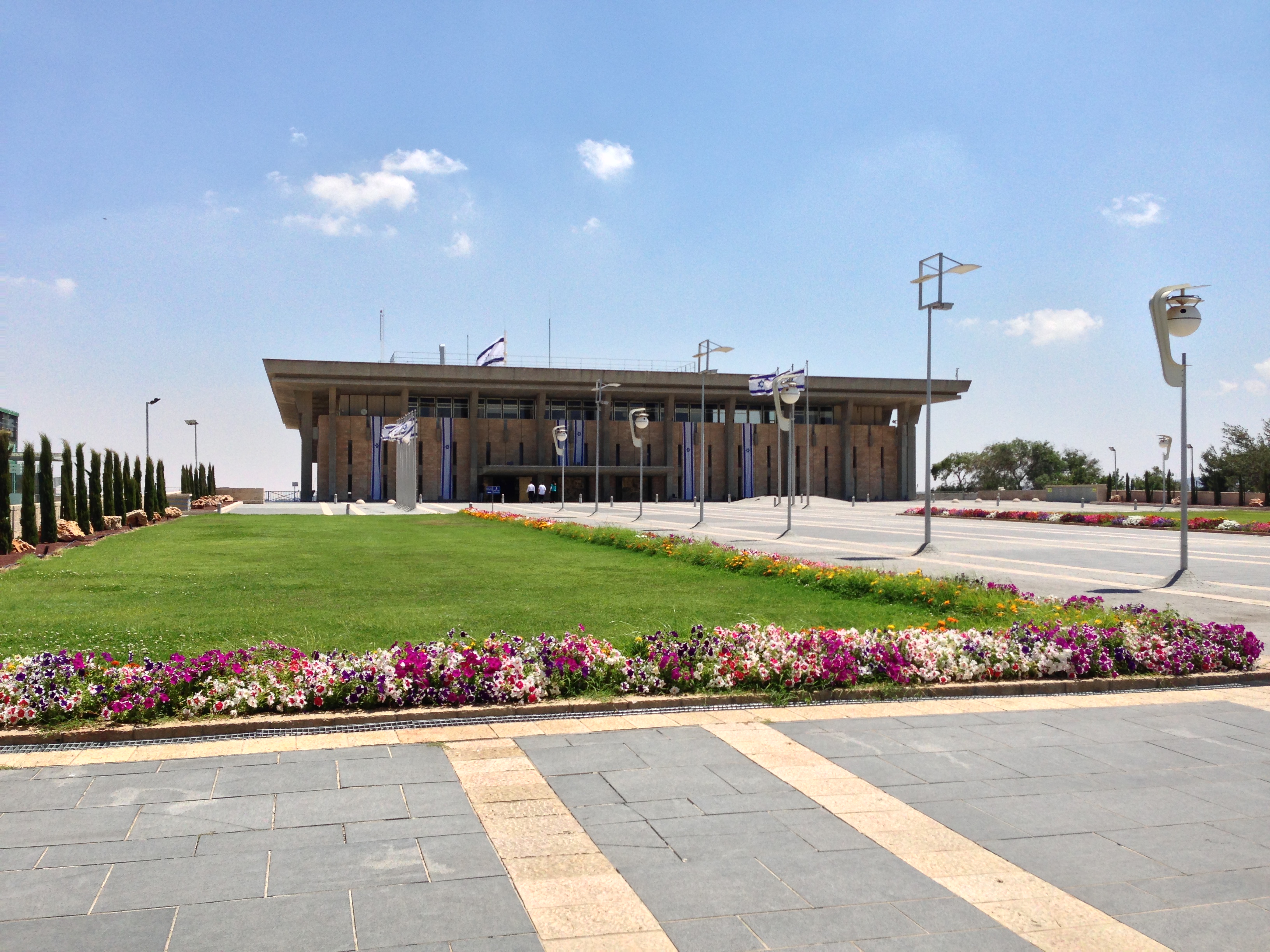 How about political preferences? There are 12 political parties represented in Parliament today, and each party differs on matters such as the religious/secular nature of the state, economic policy and peace and security. There has never been a single-party government since the inception of the state in 1948 – very different from Singapore! Such immense political diversity necessitates a strong culture of consensus and compromise.

Once you consider the friction that exists between secular and Haredi Jews, Jews and Muslims, Christians and Muslims, Jews and Arabs, etc., it is evident that getting this society to function is an astonishing feat.

Indeed, the immense diversity and division in this country is mind-boggling. I don’t think many people appreciate this — I know I didn’t before studying in Israel. People living outside Israel usually focus on Israel’s external threats and the Arab-Israeli conflict, but not on its domestic problems, which are just as critical.

At the Centre of 3 Faiths

Israel is not just a place of diversity and division. It is also a place of intersection of the three Abrahamic faiths – Christianity, Islam and Judaism.

“I was standing at the point of confluence of the largest monotheistic religions in the world.”

At no time did I understand this better than on my first Friday in Jerusalem when I visited the famous Western Wall in the Old City, which is a remnant of the ancient wall that surrounded the Jewish Temple and is considered to be a significant place of prayer for Jews. The holy day of Shabbat (or Sabbath) starts on Friday evening at sundown, and so, as expected, there were hundreds of Jews praying and singing at the wall. It was quite a spectacle to behold.

As I walked away from the Wall, the Muslim call to prayer boomed from the Dome of the Rock and Al-Aqsa Mosque – the two mosques on the Temple Mount. At that point, I realised that I was standing at the point of confluence of the largest monotheistic religions in the world. 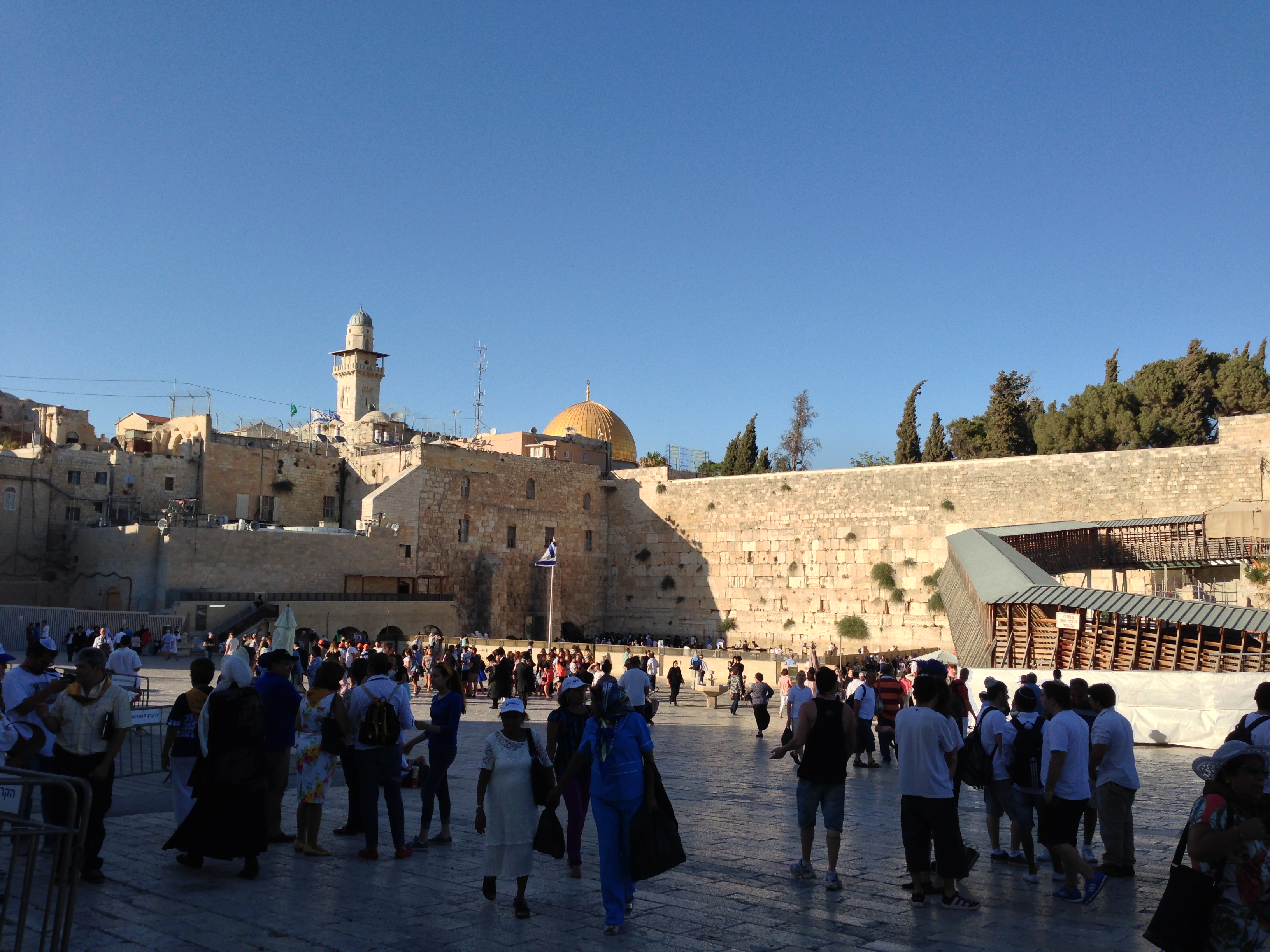 The Western Wall and Dome of the Rock

There is no other place on earth where people of so many different religions live side by side. Of course, these different religious communities do not always live in harmony. But in times of peace, pilgrims from all over the world flock to Israel (especially Jerusalem) to deepen their faith.

Religion plays such a big role in the lives of thousands of people in Jerusalem that one cannot leave the city without considering the question of man’s purpose in life and the answer that each religion offers.

Besides the diversity of Israeli society, another striking feature of this society is its tremendous resilience in the face of constant and tangible threats. Israelis live under constant threat from neighbouring countries or terrorists.

Attacks on civilians could happen at any time, in any place. That is why soldiers carry their rifles everywhere they go – with magazines strapped to the rifle butt, carrying live rounds. That’s something you’ll never see in Singapore! It took me a few days to get used to this bizarre sight, but I got used to it after a while, just like I got used to bag checks and metal detectors at the entrance of every shopping mall. 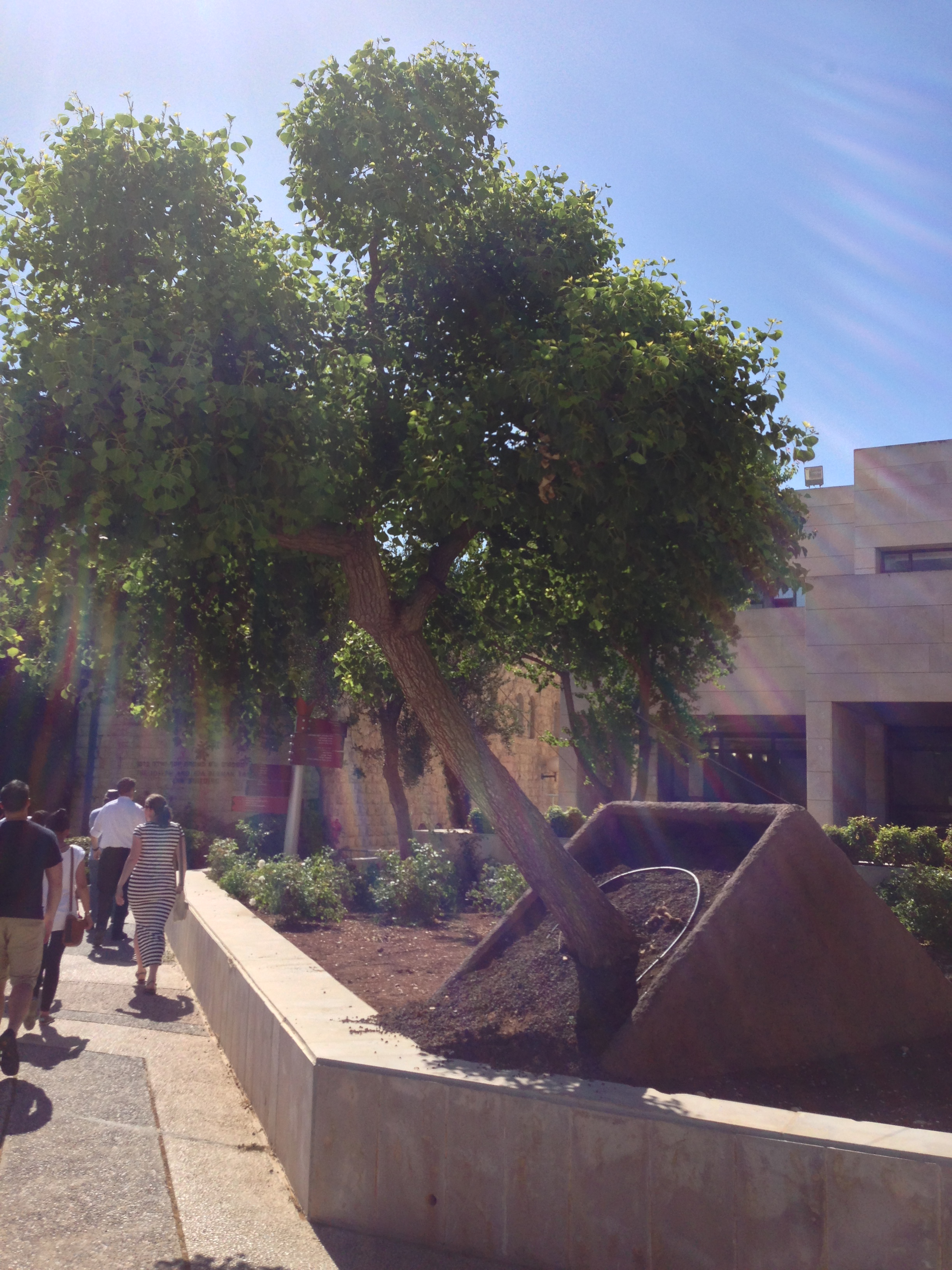 Memorial to the victims of the 2002 Hebrew University bombing. This tree was shaken by the impact of the blast, but it is still firmly rooted in its place.

Attacks have happened many times in the past – on buses, in shopping malls, and even on the Hebrew University of Jerusalem campus.

But Israeli society has learned to bounce back from every tragedy. Resilience is infused in the Israeli DNA, such that society heals quickly and moves on with life as soon as possible. Even during the 1991 Gulf War, when Iraq fired missiles into Israel, many businesses continued as per normal because Israelis knew that they could not afford to allow their economy to falter.

It also means maintaining flat hierarchies, so that creativity is not stifled by bureaucratic red tape. This behaviour is known as chutzpah. It is through chutzpah that Israelis push boundaries and break barriers.

Who would have thought that you could have fish farms in the middle of the desert? That is exactly what Israel has done, thanks to ground-breaking agricultural technology. Imagine the audacity needed to persuade people of this idea’s feasibility!

In fact, you could say that chutzpah was one of the foundational pillars of the state. From the 1890s up till 1948, the Zionist movement established governing bodies, paramilitary organisations and even universities (the Hebrew University of Jerusalem was established in 1925) while the idea of a state was still just a dream!

There was absolutely no certainty that the state would be established, but the Zionist leaders made preparations anyway. This is nothing short of a radical act of faith. 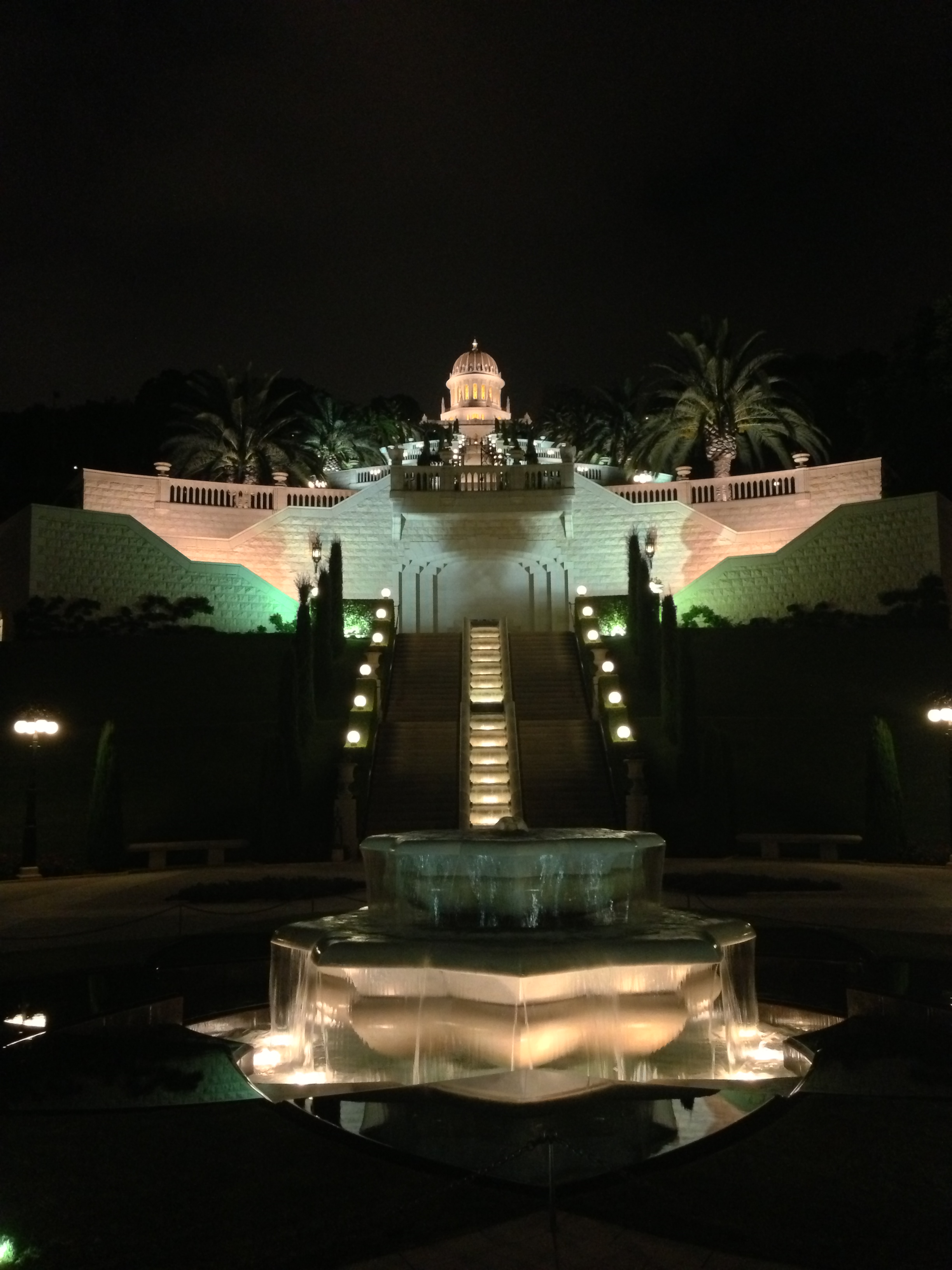 Such audacity was also displayed prominently during the Six-Day War in 1967. In these six days, Israel managed to expand its territory three-fold, despite having to fight the Egyptian, Syrian and Jordanian armies!

One major factor that contributed to this victory was Israel’s pre-emptive strike on the Egyptian Air Force. The Israeli Air Force sent 95% of its planes to bomb the enemy planes in the Sinai Desert, thus achieving air supremacy. You don’t have to be a battle-hardened military expert to know that committing 95% of the air force to a single operation is crazy!

Chutzpah can also be observed in everyday life. On a crowded tram, I saw an elderly couple demand that two teenagers get off their seats so that they could sit! At the supermarket, some shoppers use trolleys to reserve their place in line at the cashier – similar to how Singaporeans chope their seats with tissue paper.

On another tram ride, one man yelled at a dozen boisterous teenagers until they all shut up! I guess it’s easy to appreciate chutzpah as an interesting feature of Israeli society until you’re on the receiving end. 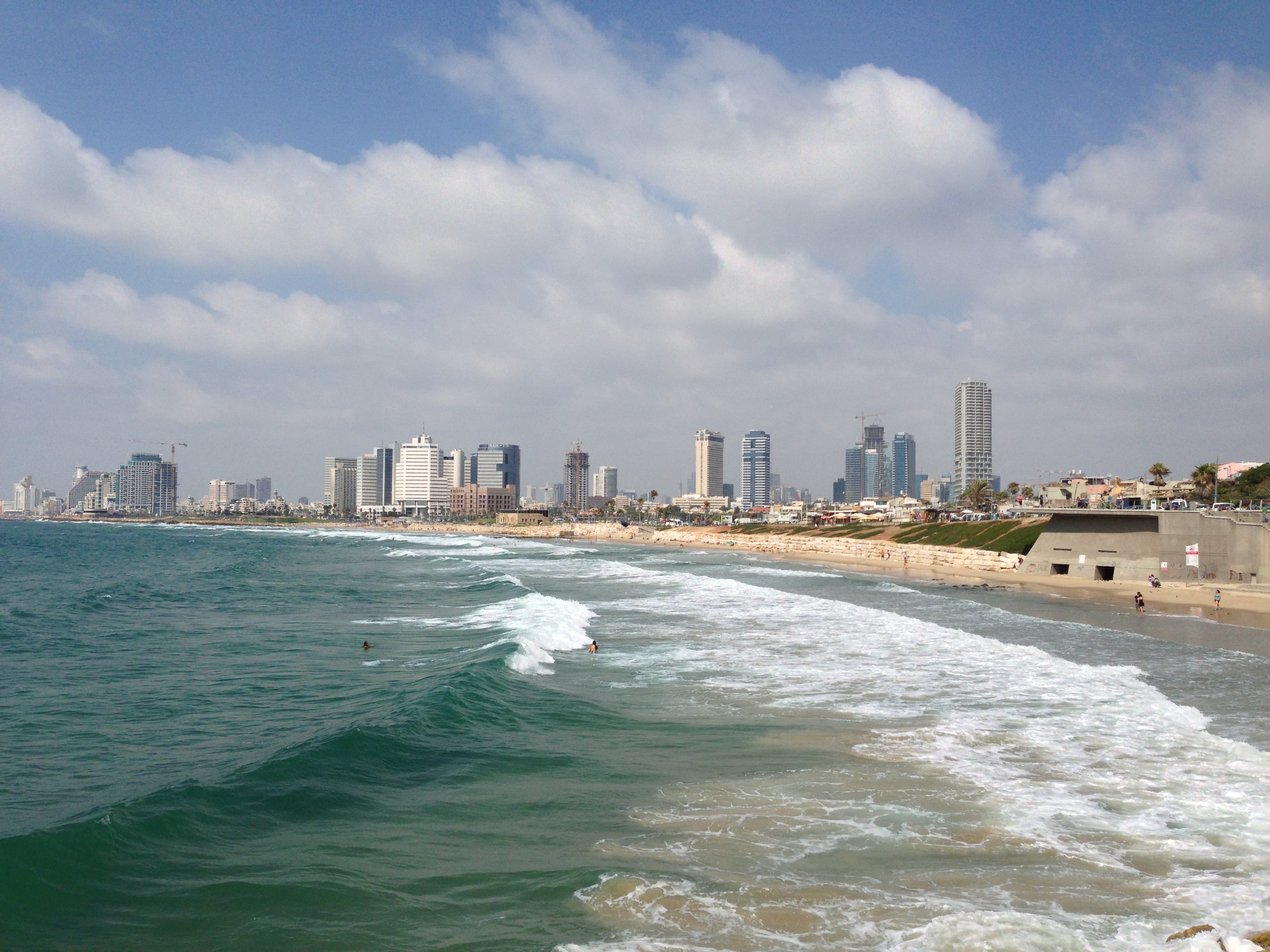 The city of Tel Aviv

There’s so much more to this fascinating country I’ve seen, and even more that I have yet to learn. The Zionist movement is very intriguing too – Zionism is probably the only nationalist movement in the world that started outside a country and brought about the revival of Hebrew, an ancient language!

I highly recommend Israel as a top destination for Singaporeans in search of the extraordinary.