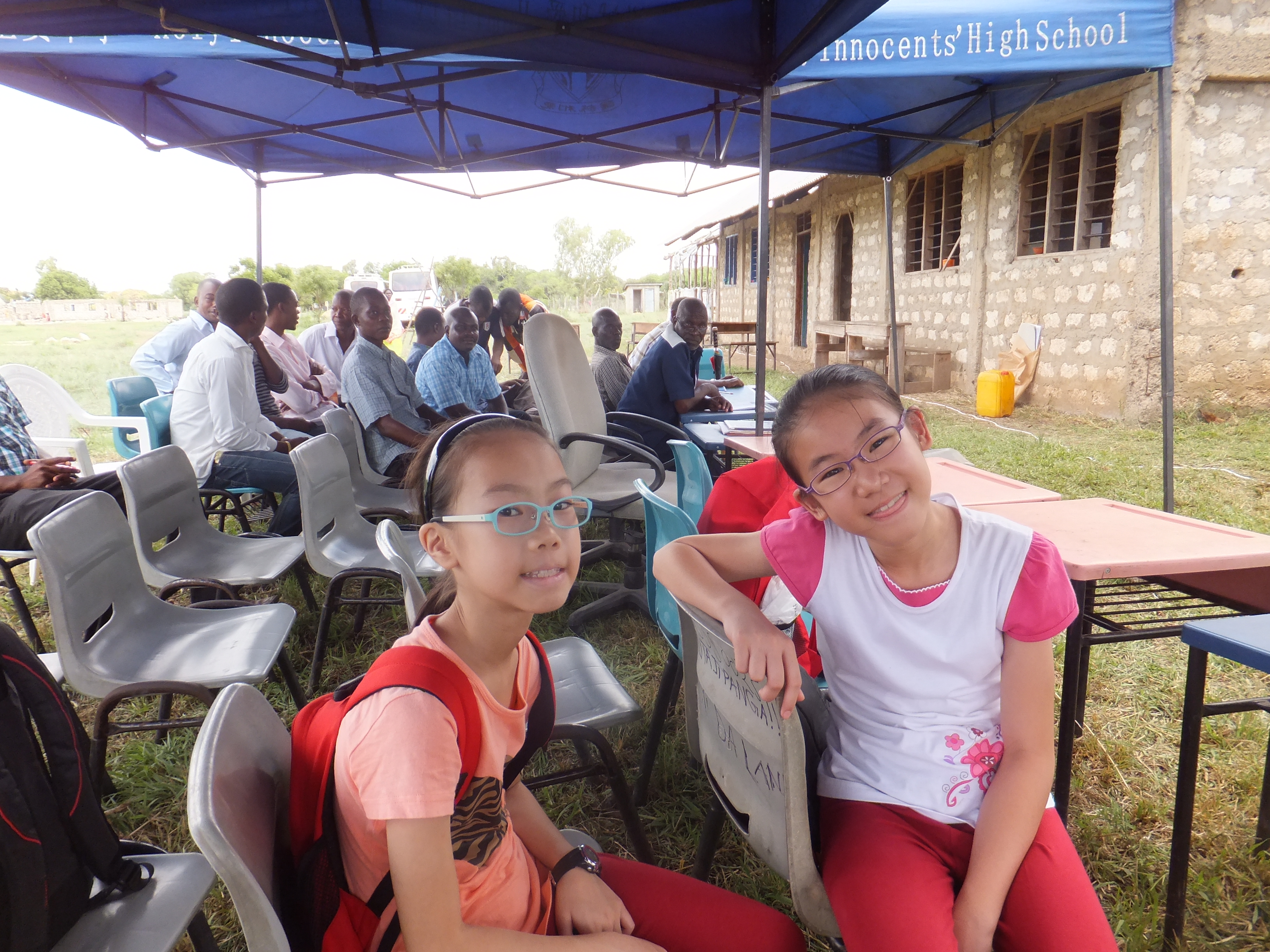 My children will be affected by the weather, it’s too warm for them!

In their first few days in Kenya, the only thing that worried them was their dad telling an incorrect fairytale.

It started as a trip for their parents to meet an old friend, Gabriel Teo, founder of the Tana River Life Foundation (he was featured here in 2013) in the village/town of Mombasa. The foundation runs a school and their parents also planned to teach at some workshops for the teachers and students while they were there.

They were at Buyani Secondary School in Tana River County, where they busied themselves with helping their dad remember children’s stories in the correct sequence. Esther shared, “I had to go to make sure… ‘cause daddy was going to tell the story of the Pied Piper so I had to make sure he told the correct story, that the sequence is correct.”

The weather there is warm but it is similar to Singapore’s weather. There isn’t much of a big change so just bring your portable fan to keep cool if you want!

People are so dangerous there! I don’t want my children to get hurt.

The most common universal childhood game that everyone has played would probably be catch. Abigail had a slightly more memorable time playing Catch in Kenya. 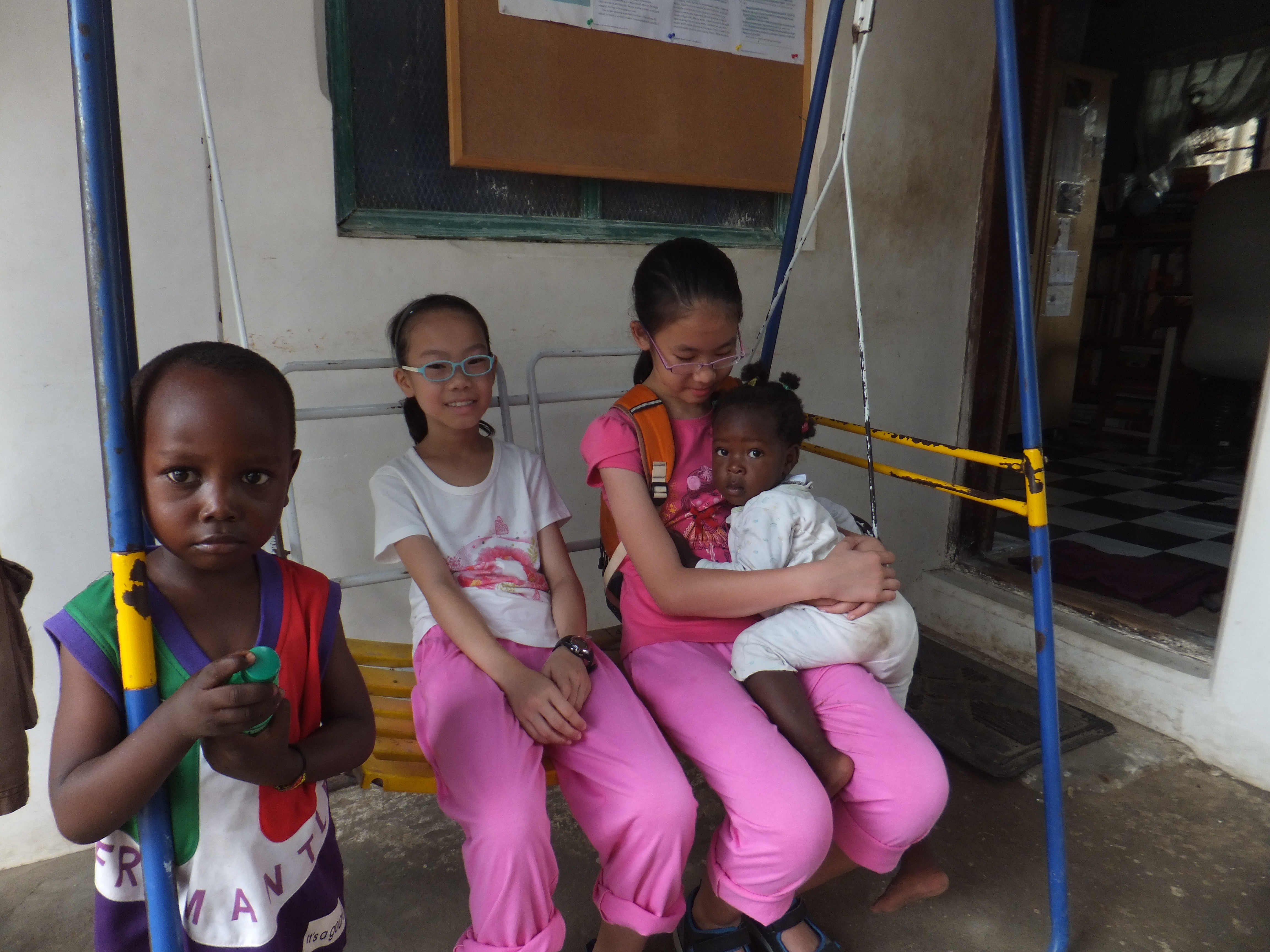 “On the second last day, we met a boy that was a little taller than Joy (the baby in the picture). I got chased round the village, 5 times! I tried to hide but he found us!” Abigail smiled and laughed at that memory while Esther added that the boy most likely knew Idsowe village like the back of his hand. To which Abigail replied, “But the back of his hand is tiny!” Unfortunately for Abigail, the village wasn’t quite as small and she had quite the workout.

Esther was so happy making friends in Kenya that she even made a list of people she has met in Kenya.

There is no Disneyland, are you sure they will enjoy? 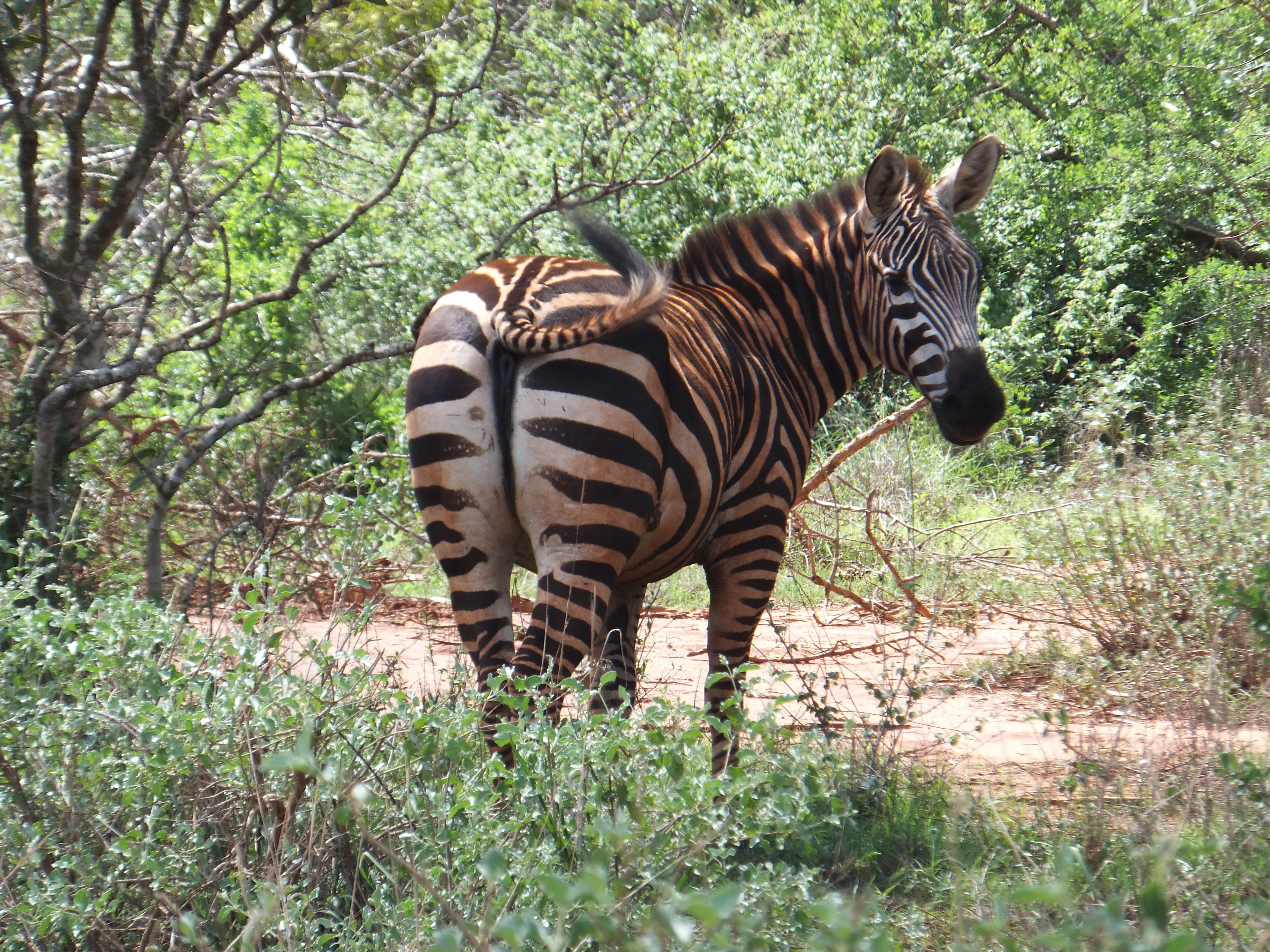 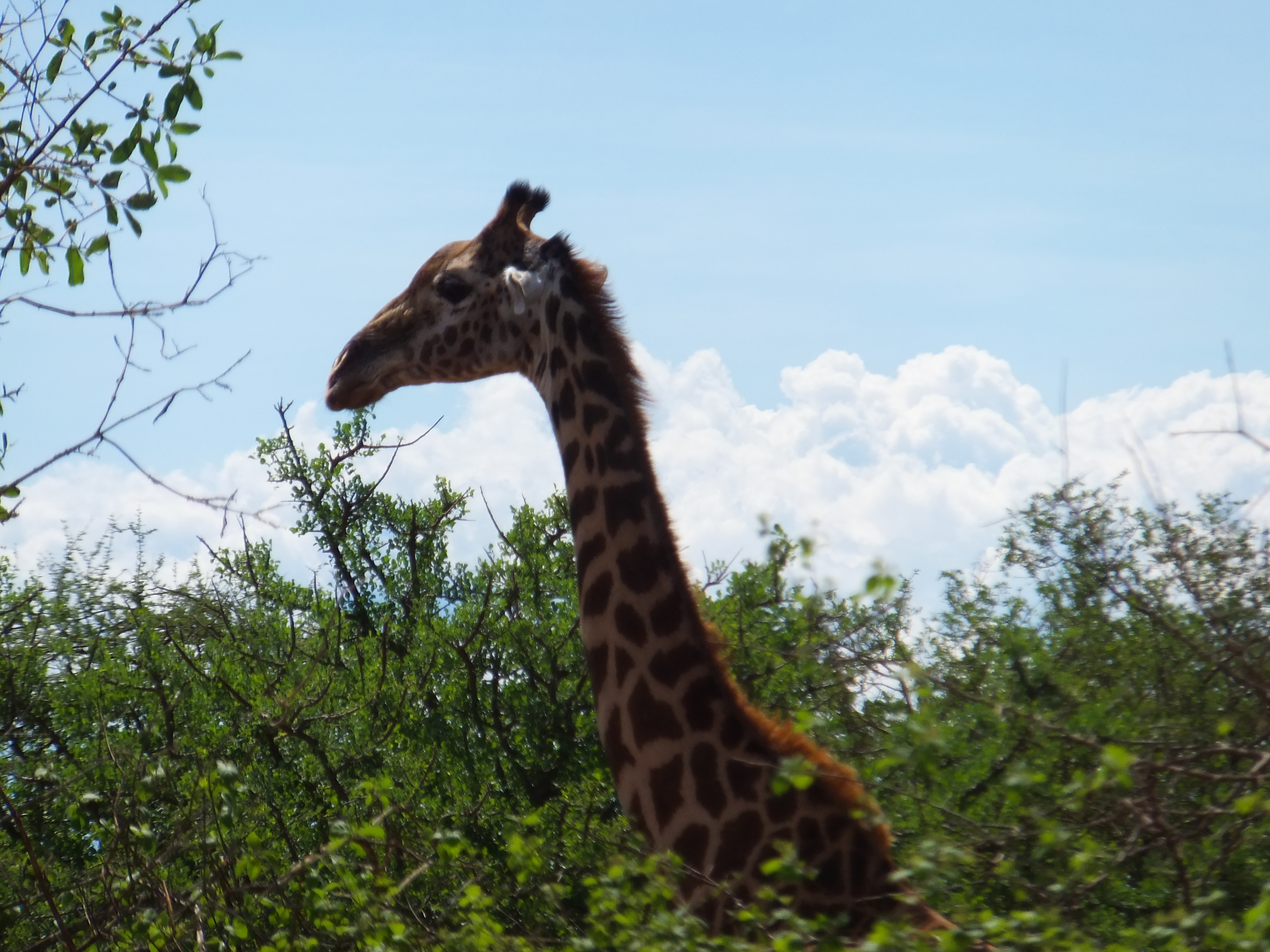 Besides spending time at the school, the family also went for a safari in Tsavo West National Park. There they breathed in the cool air and saw animals out in the wild.

Both girl enjoyed the safari so much that when we asked them what was their favourite moment during the whole trip they simultaneously said “The Safari!”

When we asked Esther to describe the safari, her response is the most insightful thing we have ever heard from a 9 year old:

This is no Disneyland but this safari gave the kids with memorable times equivalent to the said theme park.

Cannot go to Africa, there is Ebola!

At the end of our interview, we posed a question about Ebola to the girls. We asked them how they would reply their friends if they said that all of Africa was infected with Ebola.

Esther: If you have never been there before it may not be as bad as you think. Not everyone sees it from the same view.

Abigail: Ebola is on the other side of Africa. (Editor’s Note: Ebola has mainly hit West African countries. East Africa, where Kenya is located, does not have any Ebola cases.)

1. How to pass time while on the road 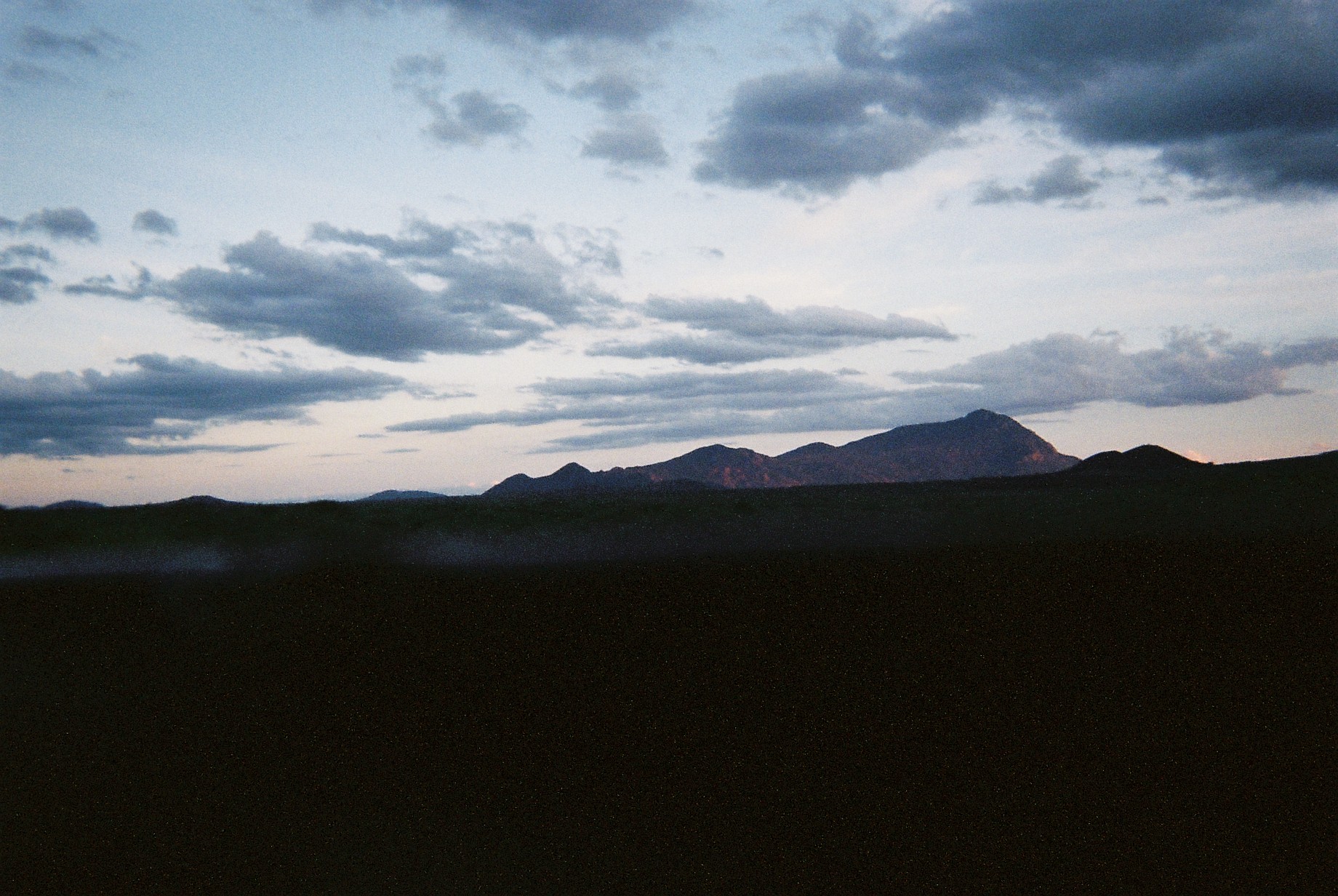 The traveling time from one place to another is quite long so have fun and admire the scenery to pass the time. You might see something special like this

The girls named it “The Lonely Mountain” after the mountain in the novel, The Hobbit.

Not content with dispensing travel advice, they shared some beauty tips as well. If you’re staying in the Tsavo West National Park, try washing your hair and let the cool African air dry it for you.

Abigail: “If you wash your hair before dinner, you go eat dinner in the restaurant over there, your hair dries marvelously.”

Don’t think that all African countries are warm and sunny all the time! There could be showers of rain too and lovely cool temperatures, especially in countries which are at a higher altitude like Kenya’s! So pack a poncho in your luggage if you are flying there.

Esther: The rain in Kenya floods everything. It floods the grass.

Abigail: Before it rains it’s fine but in Kenya when it rains, IT RAINS. It floods every single…

Esther:  It rains cats and dogs.

4. How to deal with seatbelt woes 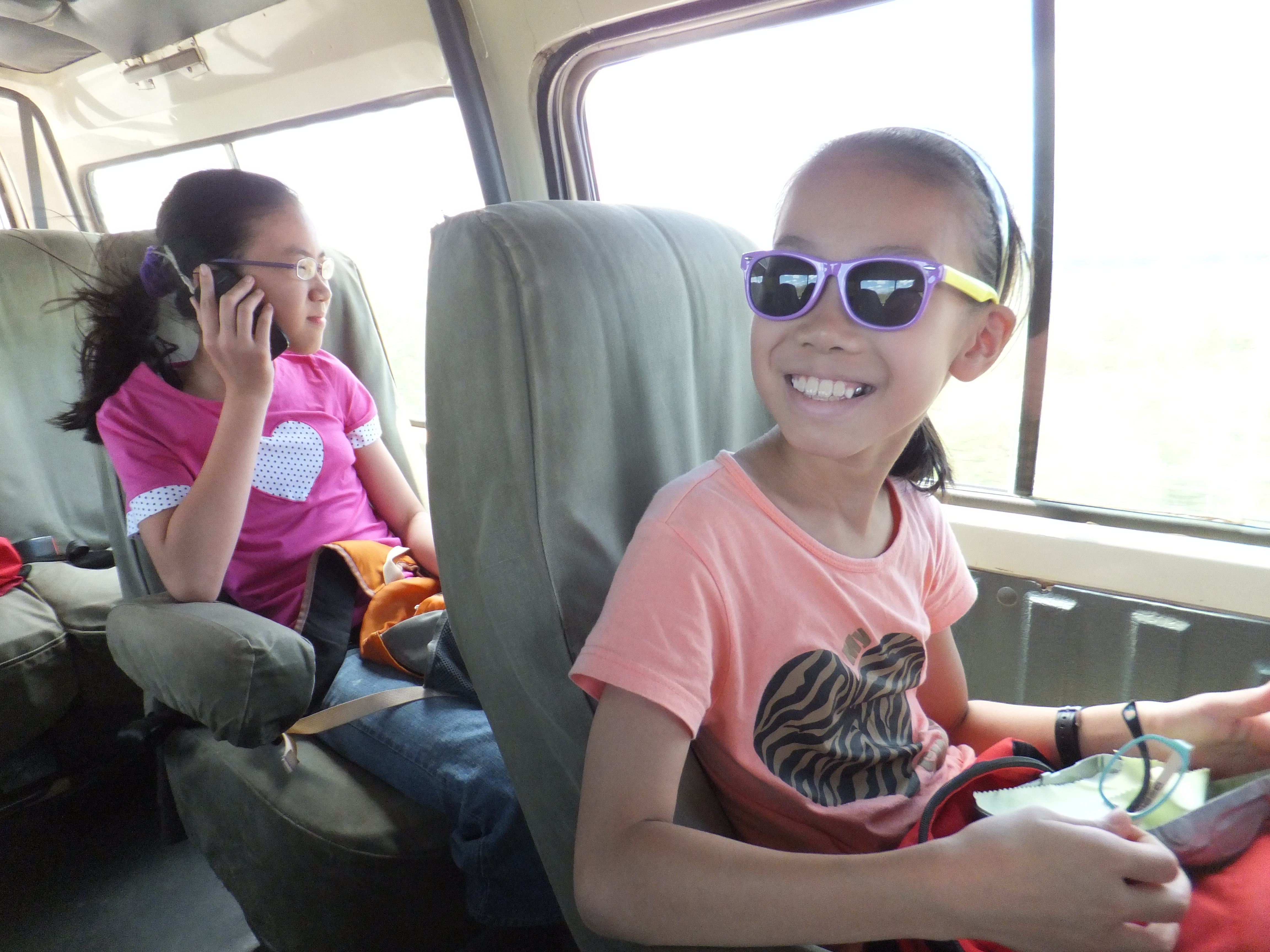 The girls are looking happier in the bigger van where they do not have to squeeze in the back seat.

When travelling on long rides that require 4 people getting squashed in the backseat, sit near the door so as to avoid being the one that sits on the seatbelt for a few hours.

Abigail: “I had the brilliant opportunity of sitting on the seatbelt. You know seatbelt you have that buckle thingy? All 4 of us squashed at the back so I was squashed in between 2 people and Esther was sleeping so it made her more… fat. And I was sitting on one of those thingies.”

The air in the safari can be quite dusty so bring along your facial foam. You can use it to freshen up for a few hours before your face gets dusty again.

Abigail: Daddy used a towel to wipe his face and there was a grey imprint.

Esther: Mine was the cleanest.

Abigail: No mummy was the cleanest

Esther: I am still very young. Daddy was like wipe wipe wipe then *laughs*

From fairytales, to playing catch around the village, to being caged up in the safari and remembering fairytales, the girls definitely had an eventful time in Kenya. Their recounts showed us that children are equally if not more observant than us.

Been travelling with children before? How did they find the place? Share it with us in the comments below!