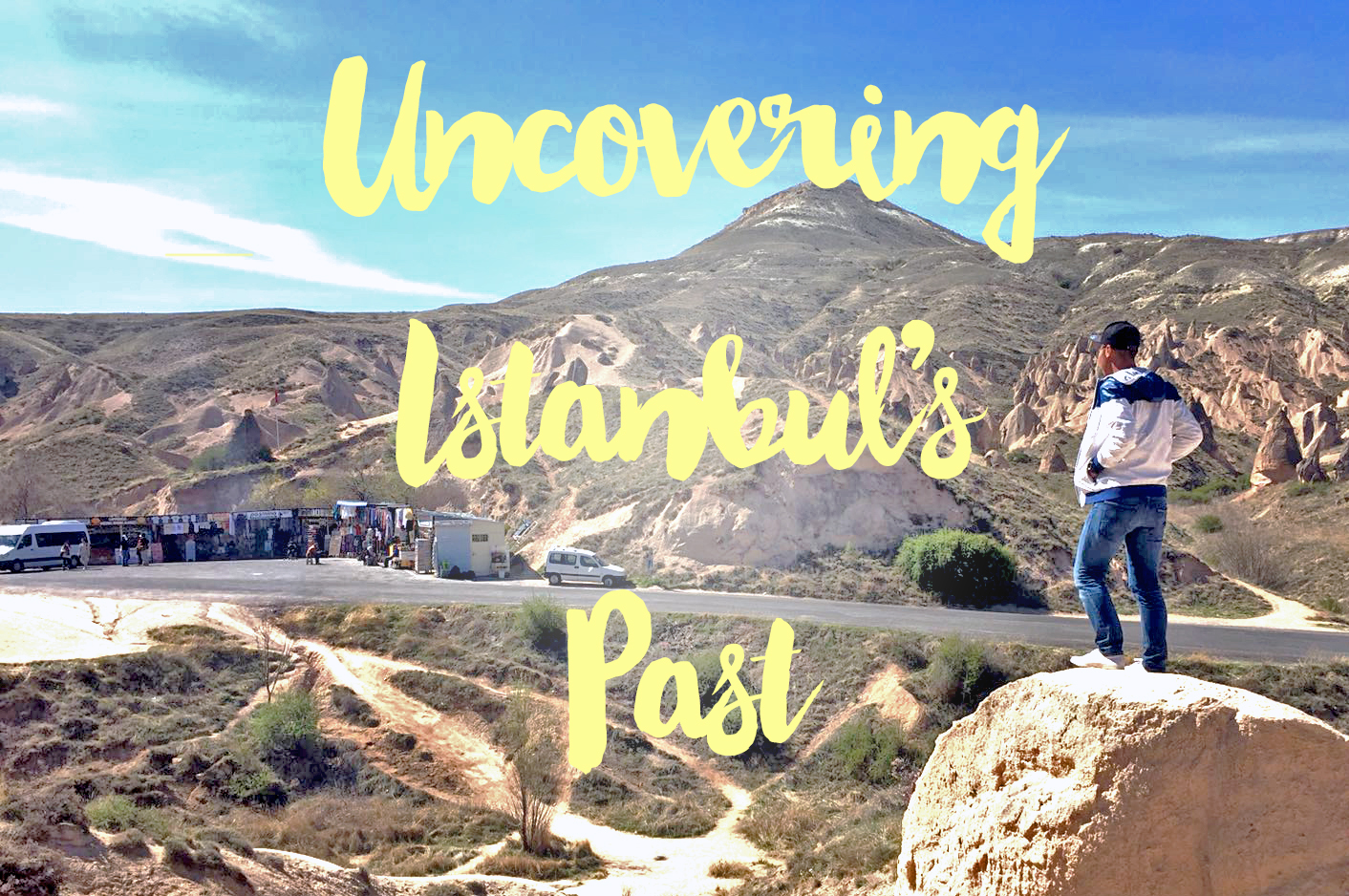 While most of us were drawn to fables and fairy tales as children, Ahmad Mubeen, a 21 year-old student was more interested in real life stories that played a part in shaping the world as it is today.

Having spent eleven years studying in a Madrasah (an Islamic religious school) prior to his polytechnic education, Mubeen always had a soft spot for Islamic history. And what better way than to journey to the heart of the once mighty Ottoman Empire.

With a heart filled with passion and a thirst for knowledge, Mubeen found himself packing his bags and on a plane to Istanbul, Turkey.

His agenda was simple- he wanted to learn more about the history behind Istanbul’s famous attractions. His first stop naturally had to be the majestic Hagia Sofia. 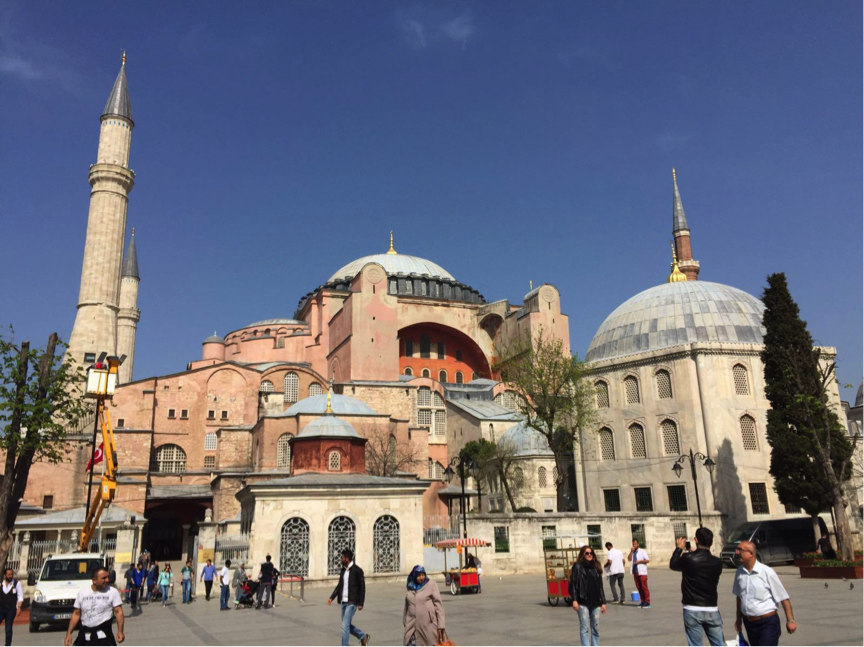 The Byzantine architecture of Hagia Sophia became an inspiration for many other mosques. PHOTO: Ahmad Mubeen

The present structure of the Hagia Sophia was built by Emperor Justinian I (Also known as Justinian the Great) with architectural designs from Anthemius and Isidore. For nearly one thousand years, the Hagia Sophia was the seat of the Orthodox Patriarch of Constantinople and was a focal point for church councils and imperial ceremonies.

In 1204, the Cathedral was desecrated by Crusaders. The Patriarch of Constantinople was ousted and replaced with a Latin bishop and the Crusaders plundered whatever riches and artefacts they could find in Hagia Sophia. Today, these holy relics can be found in the treasury of St. Mark’s Basilica in Venice. 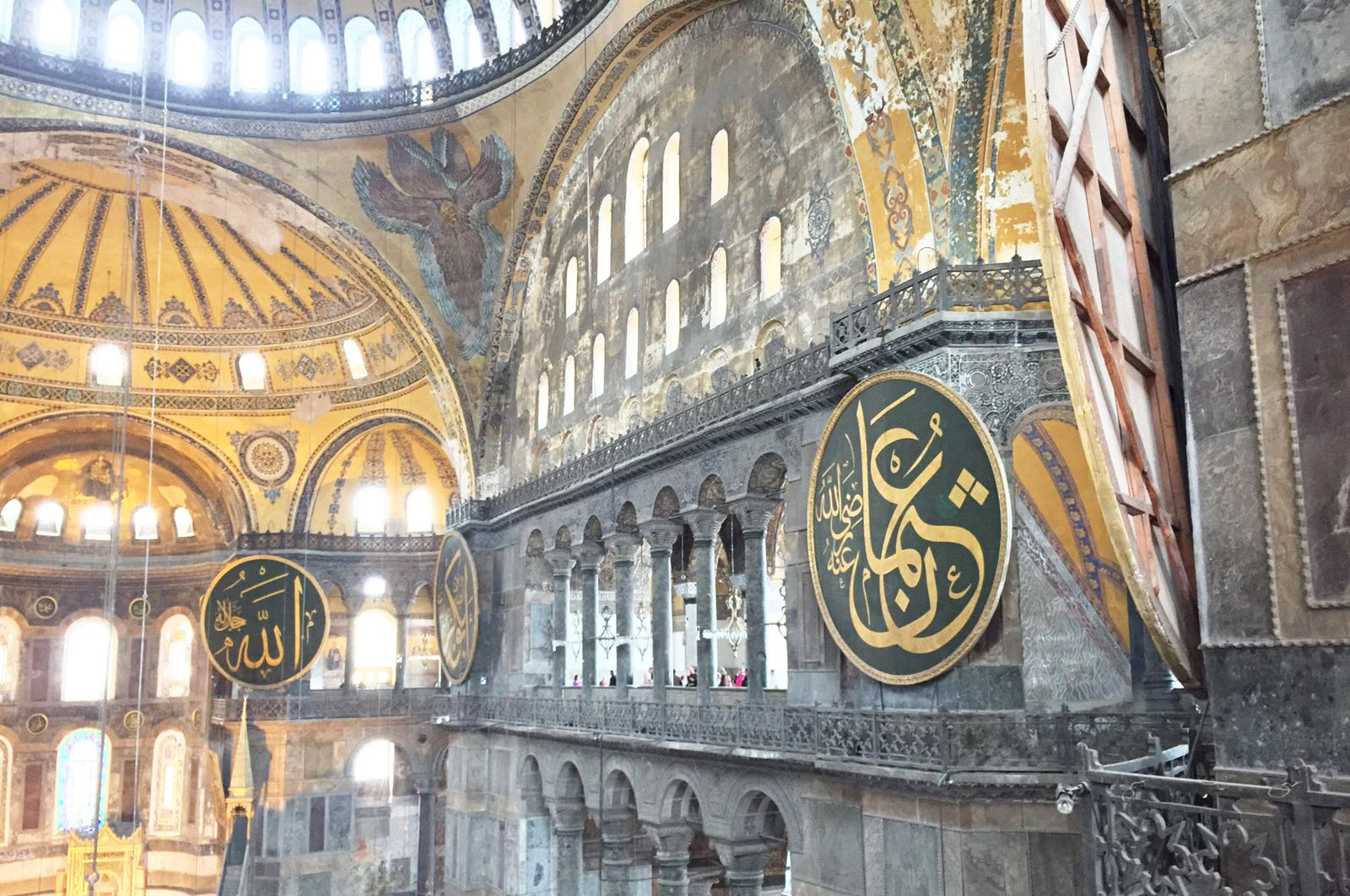 In 1453, Sultan Mehmet the Conqueror managed to gain control of Constantinople. He was amazed at the beauty of Hagia Sophia and had it immediately converted to become his imperial mosque.

Hagia Sophia was then renamed AyaSofya. Minarets were built around the perimeter of the building complex and Christian mosaic icons were plastered over. With the addition of a mihrab (prayer niche), minbar (pulpit) and a wooden minaret, the Sultan made a mosque out of the age-old church.

In 1934, the Hagia Sofia was secularized and turned into the AyaSofya Museum. The prayer rugs were removed, revealing the marble floor beneath. It was chosen as a world heritage site by UNESCO in 1985 and is a popular tourist destination, attracting approximately 3.3 million visitors annually. 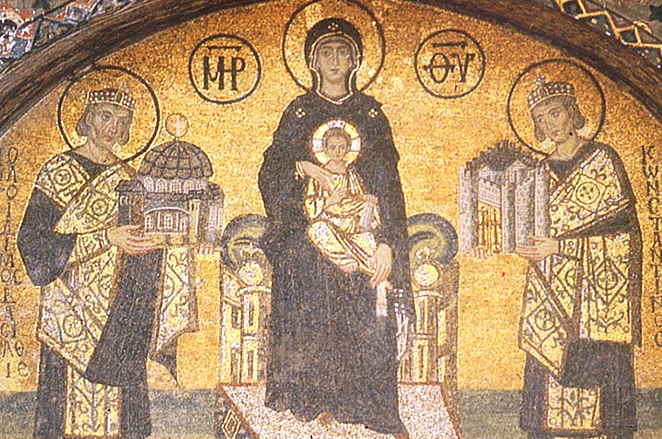 To Mubeen, the mosaics at Hagia Sophia was the highlight of the museum.

“It was like seeing all these historical figures come to life”, he recalled fondly, “AyaSofya was so majestic and so much has happened there, I felt so small and insignificant in comparison”

A musuem and a UNESCO world heritage site, Topkapi palace is one of Istanbul’s major tourist attraction.

Being someone who is passionate towards Islam and Islamic history, Mubeen was struck with awe when he visited AyaSofya.

“I couldn’t contain my excitement”, he exclaimed, “Seeing sacred relics like Prophet Muhammad’s cloak and the swords of the sahabahs felt so surreal.”

“I grew up learning about the history of our beloved Prophet and his Sahabahs so this really struck a chord in my heart.”

A city in a palace

Topkapi palace was built by Mehmed the Conquerer and was initially called “The New Palace”. This is because consequently after its construction, the palace that Mehmed resided in before was called the “Old Palace” after he moved out.

The name Topkapi Palace was initially the name of another palace that Sultan Mehmed had near the seaside. This palace had several ceremonial canons placed at the gate. Hence came the name, “Topkapi” which in Turkish means “Gate of Cannons”. When this seaside palace was destroyed in a fire, its name was transferred to Mehmed II’s New Palace.

The palace once housed a university, mosque, council and even the imperial mint. It is so huge that it could accommodate 4000 people at its peak. Inhabitants of the palace rarely ventured out as all necessary accommodations and facilities could be found there. It was like a city in itself.

Another section of the palace is the Harem, which means ‘forbidden’ in Arabic. It was a complex of apartments where the Sultan’s mother, wives, concubines and children resided.

The Chamber of Sacred Relics, located inside the palace consists of various religious works of art sent to the ottoman sultans throughout the 16th century to the 19th century.

At the time when Wahhabis were attacking holy Islamic locations and artefacts, the transference of Holy Relics from places like Medina were sent to Topkapi Palace to be protected in the Chamber of Sacred Relics. 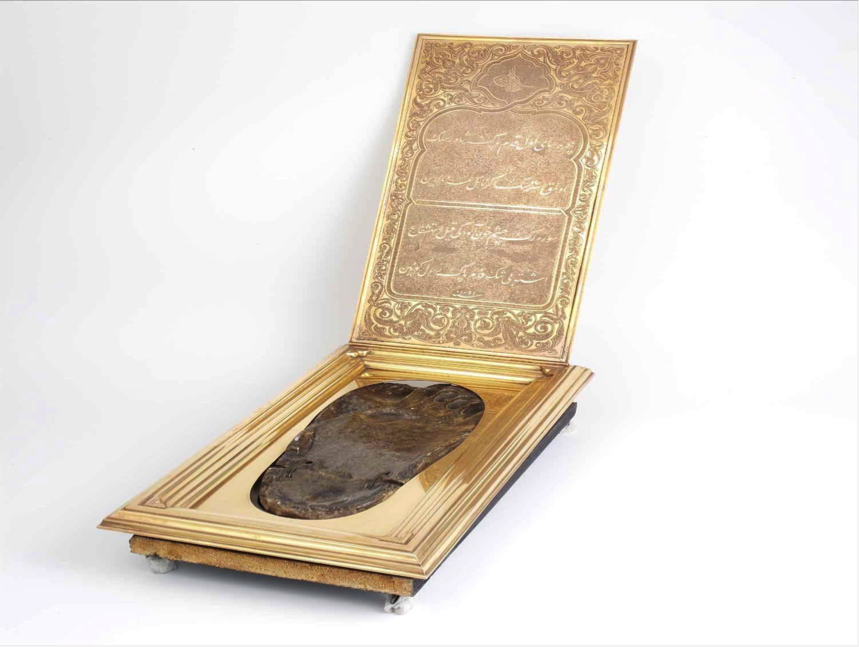 The footprint of Prophet Muhammad, one of the many relics that can be found in Topkapi Palace. PHOTO: topkapisarayi.gov 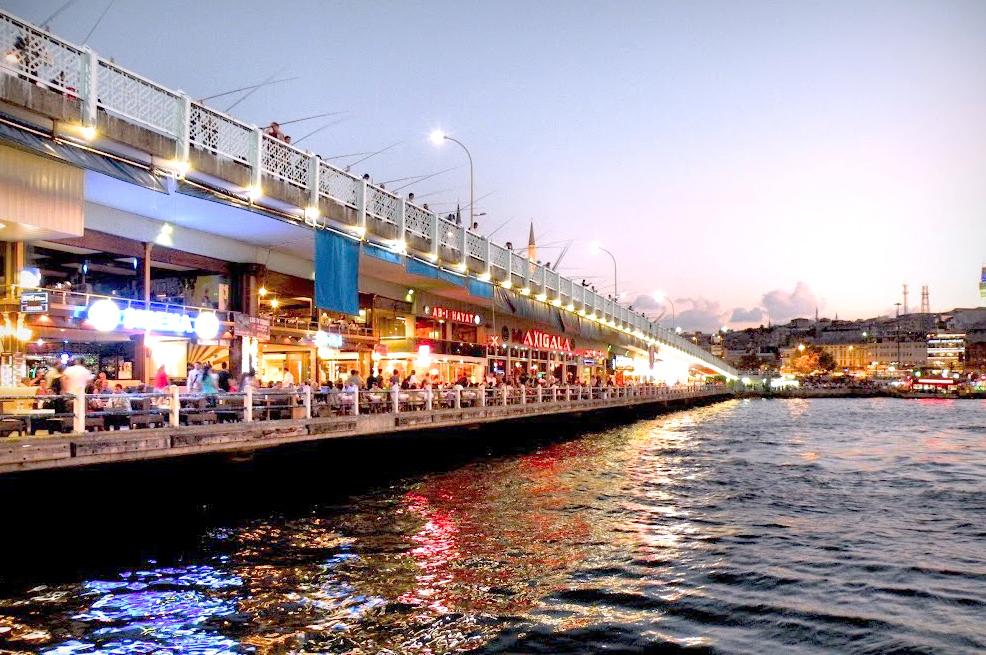 Tourists and locals alike flock to the Galata bridge because of the restaurants and cafes located at the bottom of the bridge.

Mubeen recounted how he had to navigate through the tumultuous crowd of tourists and locals. What was harder to ignore was the restaurant owners vying for their attention and trying to outdo one another.

In the end, they settled for the famous fish sandwich which were grilled right on the spot. Mubeen included that the street food vendors caught their own fishes from the river, which made their fish sandwiches deliciously succulent and fresh.

The five lives of the Galata Bridge The Galata bridge, an icon in Turkish literature and theatre, spans over the Golden Horn. It connects the Asian side of Istanbul (Eminou) to the European side (Galata).

Throughout history, multiple bridges were built across Golden Horn but were destroyed for various reasons. The first bridge that was built over the Golden horn was during the Turkish siege of the city. It was a makeshift bridge consisting of ships placed side by side across the water. This mobile bridge was essential for Turkish Troops to get from one side of the Golden Horn to the other.

In the 16th Century, Sultan Bayezid II decided that a proper bridge needed to be built. And so the Sultan had Leonardo da Vinci come up with a design for a bridge. However, the ambitious design was rejected by the Sultan due to technical limitations. Later on, another Italian artist, Michelangelo, was invited to design a bridge for Istanbul, but he rejected the proposal. Most assume that he felt insulted to be invited only after his rival, Leonardo. Sceptics on the other hand insist that it was due to religious tensions that existed between Christians and Muslims during that period in time.

In 1845, the first Galata bridge at the entrance of the Golden Horn was construced by the mother of Sultan Abdulmecid and was used for 18 years. The bridge was known as Cisr-I Cedid or New Bridge.

The bridge was replaced by a second wooden bridge in 1863 on the orders of Sultan Abdulaziz, prior to the visit of Napoleon III to Istanbul.

The third bridge was signed with a French company, but the outbreak of war betweem France and Germany delayed the project. A British firm took up the job instead and managed to finish construction within 3 years.

The fourth Galata bridge was built in 1912 by the German Man firm. It was badly damaged after a fire broke out, allegedly caused by one of the restaurants’ kitchen at the underside of the bridge.

The Galata bridge has always had a symbolic link between Eminou and Galata. Two continents from the same country connected by a bridge. As Peyami Safa said in his novel Fatih-Harbiye, a person who went from Fatih (Galata) to Harbiye (Eminou) via the bridge set foot in a different civilization and different culture. 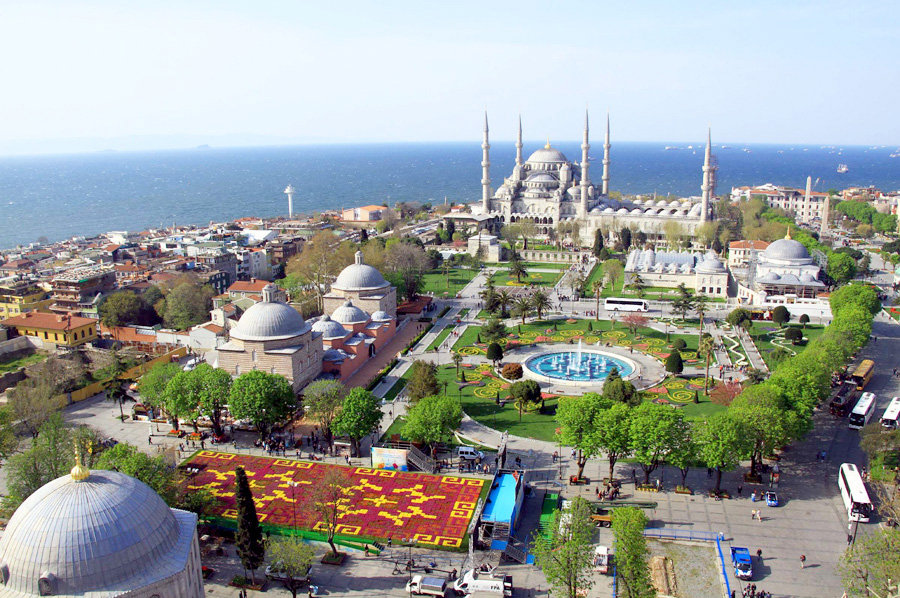 Mubeen was lucky to have stumbled upon the festival by accident. He had been wandering around Sultan Ahmet square when they witnessed a crowd gathering around a sea of vibrant, colourful flowers.

The locals explained that it was the world’s largest ‘tulip carpet’ laid out to commemorate the 11th installment of the festival. It consisted of 563,000 local grown tulips that were arranged in the pattern of a traditional Turkish rug,

The festival was highly celebrated throughout the city. With Tulips that sprung at every corner and tulip themed activities, Istanbul is at its liveliest at this time of the year.

Mubeen never imagined a festival dedicated to a species of flower would ever be so vibrant. He visited art exhibitions, symposiums and even managed to catch a local live band perform.

As a form of tribute to the Tulip Era as well as Tulips as a symbol of their culture, the Istanbul Metropolitan Municipality started the Istanbul Tulip Festival in 2005 and has since become an annual event.

Although the festival itself is relatively new, the love Istanbulites had for Tulips, Mubeen found, dated back centuries ago. 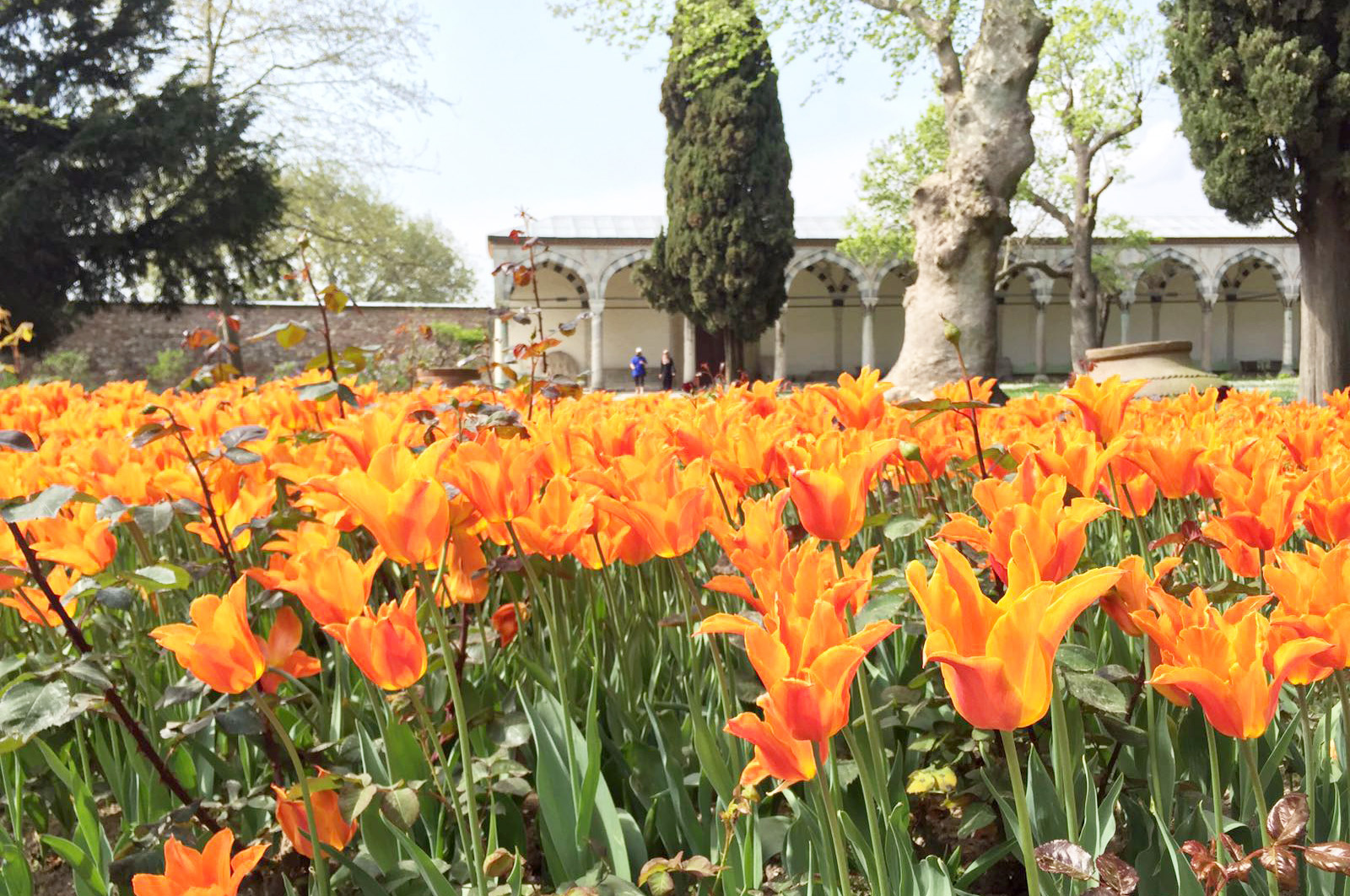 Tulips sprouted at every corner in Istanbul. PHOTO: Ahmad Mubeen

Tulips have long since been a symbol of Istanbul. Not only did they originate from Turkey, but they were also largely cultivated in the Ottoman Empire. So much so that the years 1718-1730 became known as the Tulip Era in Turkish history.

Under the reign of Sultan Ahmed III, this period was known for peace and enjoyment. Tulips were not just flowers, they were a way of life. Their art, literature and lifestyle centered around tulips.

During the Tulip Era, the Ottoman empire flourished. The Industrial Revolution commenced in the Ottoman Empire way before it did Europe, with the emergence of paper and carpet factories. International trade increased and poetry as well as other forms of literature entered a golden era.

The Tulip Era symbolized a peaceful respite from periods of intense war and bloodshed.

“Reading about history from books is one thing but to actually visit historical places is a whole new experience altogether”, Mubeen remarked, “And I’m glad that I chose to go Istanbul, of all places”

He added that the only thing better than the sights and attractions were unquestionably the locals. Most of the locals that he encountered had been so friendly and accommodating.

He recalled how a group of local men his age befriended him and asked him out for lunch. They later showed him around Istanbul by foot.

When asked whether he would visit Istanbul again, Mubeen flashed a wide grin. Mubeen taking a selfie with the group of locals that he became quick friends with. PHOTO: Ahmad Mubeen