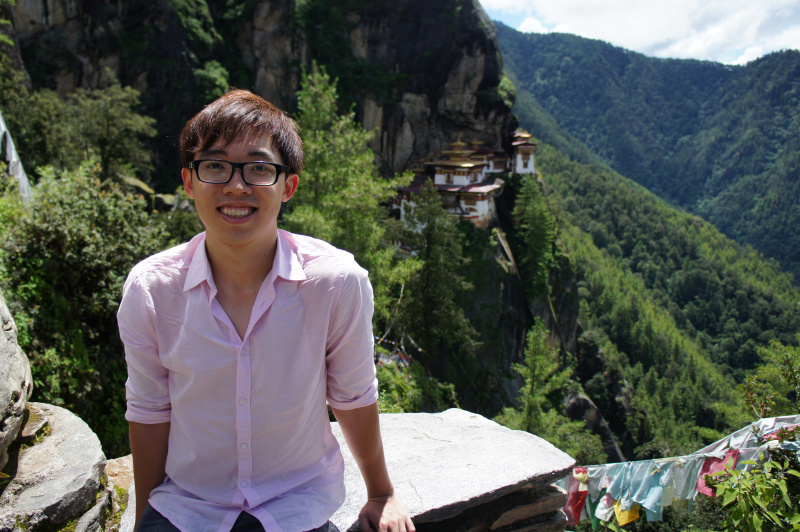 In the previous two weeks, we have shared

Jian Xuan’s stories on the amazing hospitality of the Bhutanese people and the country’s unique culture.

To conclude the series, we will be sharing with you Jian Xuan’s experience of travelling in Bhutan. In this last story, Jian Xuan talks about the major Bhutanese cities he visited, Singaporeans in Bhutan whom he met, and the possibilities of living in this Himalayan country.

We went to three places. All of them are in Western Bhutan. The first place we went to was the capital city, which is Thimphu. The second place was Paro, and the third one was Punakha, which was the old capital of Bhutan. It felt like a town, and had a small population. Thimphu and Paro are more cities, in the Bhutan terms, but you have to take it with a pinch of salt because Thimphu, the capital of Bhutan, has only 100,000 people. The whole country only has 700,000 people.

Was it your first time in Bhutan?

Yes, and it is probably my first and last time as well [laughs].

Oh, why first and last?

Oh, because it is very expensive to go back. If you want to go to Bhutan, you have to pay about USD$200 per day when you are there during the off-peak period and USD$250 during peak period. The school subsidized our fees as it was an academic programme.

were not an issue, would you go back?

Yes, I would go back if money

were not an issue. I would go back if I could, in the future if I have the money.

Having been to 3 different places in Bhutan. How different are they from one another?

Thimphu is very different from Paro and Punakha. Thimphu is not really “representative” of Bhutan because it is similar to any other city. It is like a typical city that is developing, but it is not that polluted and horrible. It is just more polluted relative to the rest of the Bhutan. Yes, it is a bit scruffy in certain parts and it is a bit greasy, but overall it is still rather clean. Punakha is very nice, Paro as well. Punakha is like a kampong (village); really untouched.

So, Punakha has a lot of open land?

Open plains, rivers, and mountains. It is very beautiful.

Are there a lot of people staying in Punakha?

Not many people. There are about 100, 000 people in the capital, the rest has even lesser people. The west is more developed, and the east is really remote. The country is not very big, but you need about a week to travel from the west to the east. Actually Bhutan is only about the size of Switzerland. It is not a very big country.

Cars. Yes, automobiles. They do not have MRT (subway) or anything of the sort. They do not even have public buses. They have cars and they walk. There is a pedestrian day on every Tuesday, where the entire CBD (business district) area is closed off and no cars are allowed to enter or leave, except for special purpose vehicles like tourist vehicles, government cars. They try and enforce it because they want to save the environment. They are very big on saving the environment. Even the Prime Minister of Bhutan cycles to work on Pedestrian Day.

So bikes are allowed?

Bicycles, yes. Not motorbikes. The people usually walk, they really walk a lot and they cycle a lot as well.

So how did you all get around?

We had a tourist vehicle. Pedestrian Day is so cool. Anyway the city is not that big, so you can really just walk. Some places are all next to each other one.

Are Punakha and Paro very small as well?

They are even smaller. Paro is where the airport is located. You cannot fly (straight) to the capital. You have to fly to Paro first and then take a transport; either a bus or a taxi to the capital.

Is Paro very far away from Thimphu?

No, (but) it takes about 2-3 hours by car because it is all mountain routes.

Are there any travel safety issues you want to share with the readers?

Bhutan is very safe. However, in Thimphu, they advised us not to go to certain places at night, especially the neighbourhood that I went to (Changjiji) because people get drunk and when they get drunk, they might get violent and there are street gangs. So they advised us not go to such shady places but the other areas are fine.

If they were to offer you an opportunity to do an exchange programme in Bhutan, would you consider?

I do not mind! Bhutan is very nice! It will be very nice to go there on exchange, I think.

What about for a longer period like, maybe for work or full-time study?

Yes, why not? There are quite a few Singaporeans who went or are in Bhutan already. I had to interview some of them for one of my article. They loved Bhutan. It is very rare to meet someone who has visited Bhutan that says they do not like it. Even if you do not like things relating to nature, the Bhutanese people are just so nice.

So you got to meet some Singaporeans who are there?

Yes, I met a Singaporean newsmaker called Tsang Guangquan. He was working with the youth in Bhutan. He was working in a place that is under Bhutan’s Ministry of Education (MOE). His project is called “A Shot of Hope”. He collects old cameras, bring them to Bhutan and teach the youth how to take pictures, so that they can learn these skills, find work and earn some money. One of the main drivers of Bhutan’s economy is tourism, so when people go to the country, then the youth can offer to help them take pictures. Through this, they can earn some money. It does not sound like a glamorous job but it is just something to do, and it takes up some of their time because these youth unemployment is a problem in Bhutan.

Is this his project or was it an initiative by the Bhutanese government?

He was studying in Belgium and he had a friend, Nathan Koay, who is Malaysian. The two of them were doing their MBAs at Vlerick Leuven Gent Management School. For their MBA, they had the option to either run a social enterprise or write papers, so they thought that running a social enterprise like this would be better than writing papers.

Tell us more about it.

They were brought over by a Non-Governmental Organization called the Bhutan Youth Development Fund (BYDF). He stayed in Bhutan for quite awhile because of this project, but he is back in Singapore. I know of a teacher, Mr. Lin Lit San, who went (to Bhutan), and then he came back (to Singapore) and brought his RI (Raffles Institution) students there. He went to Bhutan for a few months under Singapore International Foundation to help them set up Information Technology (IT) in their schools. Then, he came back and brought his RI students there for a project, but I do not know what it was about. There is another Singaporean lady, Ms Jeanette Ng, who is working in their technology park. Bhutan has just started building technology parks and they have a centre that incubates social enterprises. She is an expert in business, so she went there as an overseas consultant for them.

Having been to Bhutan for 2 weeks, do you foresee any difficulties in living there?

Do you have any last words for our readers?