As I’ve mentioned before, I’m enrolled in a Master’s degree programme at the Moscow State Institute of International Relations (MGIMO). The programme is called “Politics and Economics in Eurasia”. It’s quite unique as it’s a programme offered by a Russian university and taught in English – such programmes are still very uncommon in Russia. My university seems to be a pioneer in such efforts: it runs two other English-language Master’s programmes (“Governance and Global Affairs”, “Russian Culture and the Arts”), and has just launched an English-language Bachelor’s programme called “Government and International Affairs”.

My studencheskiy bilet – quite unlike the student cards that you get at most other schools!

When my application for this programme was accepted, I found it really difficult to get information about this programme and the university. That was hardly surprising, since the programme is very new (it began in 2010), and only a small handful of students (not more than 15 per year) enrol in this programme. The two other English-language, Master’s programmes, “Governance and Global Affairs” and “Russian Culture and the Arts”, were introduced just last year. Our schedules overlap sometimes.

Naturally, I’m the only Singaporean here. The other 12 students in my programme are from various countries: three are from North America (Canada and the US), one from Turkey, one from Azerbaijan, one from Afghanistan, and the rest are from Europe (France, Hungary, the Netherlands, Serbia, Sweden and Switzerland). There is one other Southeast Asian enrolled in an English-language programme (but not mine) and he’s from Thailand.

We have had courses on the following topics:

There were plenty of things that I’ve had to get used to. Firstly, to put it bluntly, the administration of the programme has been a mess. Information is hard to get, and does not always arrive in advance. In some instances, we’ve had to wait several weeks before we received course syllabuses. In fact, we still don’t have a syllabus for our entire programme (i.e. what courses we can expect for the next semester), and the administration has hinted that they are reluctant to release too much information, for they do not want it to be leaked to other universities.

Last-minute changes to our timetable and grading requirements are not uncommon, and this can be a real pain. Our programme coordinators try their best to give us the updates in time, and even resort to using a Facebook group to disseminate information. Yes, running a Master’s programme on Facebook sounds weird, but (to some extent) it gets the job done. My colleagues who don’t have smartphones or Facebook accounts might beg to differ, though. 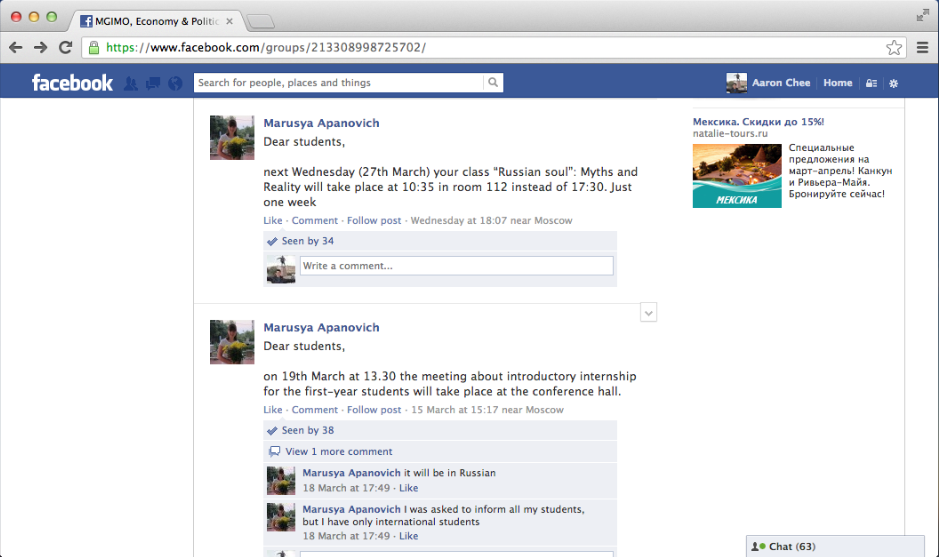 Given that the programme is relatively new, it’s hardly a surprise that there are many other teething problems. Some lecturers don’t seem to know what to do with us, as they’re not sure of what we’ve done before (and remember that we all come from different educational backgrounds). Some seem less comfortable teaching in English, or are unaware that their courses overlap with other courses. A few weeks ago, a conflict between one of our lecturers and the administration erupted. For a while, he refused to give us our lectures during the designated timeslot. Thankfully, that’s been resolved!

The Russian approach to education is also rather different from what I’ve been used to in Singapore and the UK. Class hours are loooong. A typical day starts at 2.30pm and ends at 7pm, but the start of this semester was an absolute nightmare. For a few weeks we had days which started at 1pm and ended at 10pm without scheduled breaks in between (!). 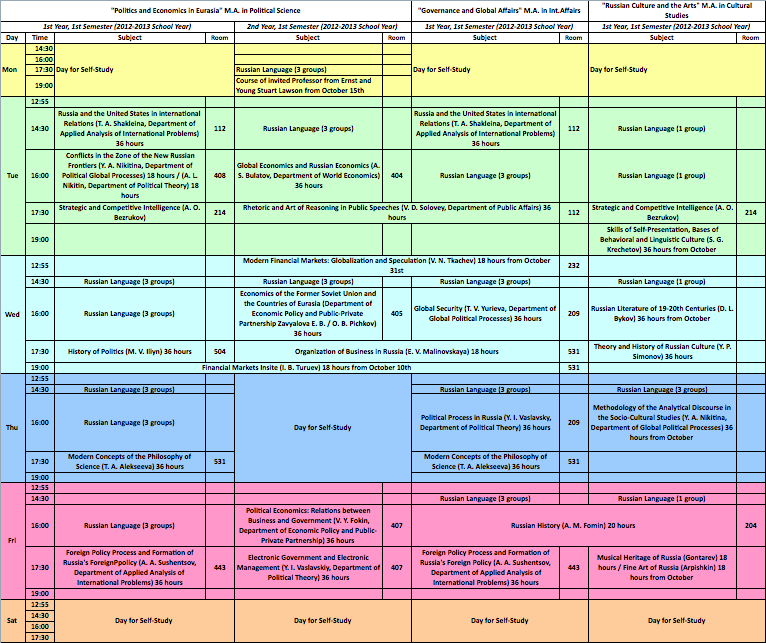 The grading system can be rather arbitrary too. Some subjects are treated as what the Russians call zachyot, which means that the grades for these subjects are determined by our performance on assignments (e.g. presentations or papers), attendance and class participation. Others are treated as ekzamen subjects, which means that our grades for these depend on an examination at the end of the semester. I still haven’t quite figured out the logic behind this – for instance, in my first semester, world history and political philosophy were the ekzamen subjects while the others (some of which I would consider to be far more important and relevant in a Eurasian studies degree) were zachyot.

Some of my colleagues complain that the mini ‘tests’ that we often get in class – on the facts and opinions presented in our recommended readings – are out of place in a Master’s programme. They have a point, but I’d also like to point out that such grouses ultimately reflect a divergence in views on what education should be about. Some students from my programme came to Russia expecting a ‘Western’ education: perhaps they were expecting fewer hours of class, more space for discussion and critical thinking, or greater ease of locating English-language resources. Naturally, then, the expectations of many (including myself sometimes) have been dramatically recalibrated over the last seven months.

The inside of my zachyotnaya knizhka (no I’m not showing you my grades!)

In short, my experience in Russia has been a real eye-opener. While the MGIMO education can sometimes be demoralising, it’s also been a great opportunity for me to learn the Russian language. More importantly, it’s been a constant reminder of the sheer diversity of educational systems, culture and experiences around the world that we often take for granted.

Have a question for Aaron? Write to him at aaronchee@gobeyond.sg!