While many things have changed in Russia since the fall of the Soviet Union, this country’s obsession with form-filling, stamps, queues and painstakingly recording everything in cursive Russian handwriting hasn’t. My first few experiences with all of these forms of official procrastination certainly left a huge impression on me. So I’ve decided to talk about my week-long quest to settle the paperwork for my dormitory. Here goes.

When I arrived in Moscow last August, I made my way to my dormitory, based on the rather vague instructions I had received. I was told that it was called “Dormitory No. 2” and given this map. That was all. Nothing about who to look for, what time to arrive, or what to do upon arrival. 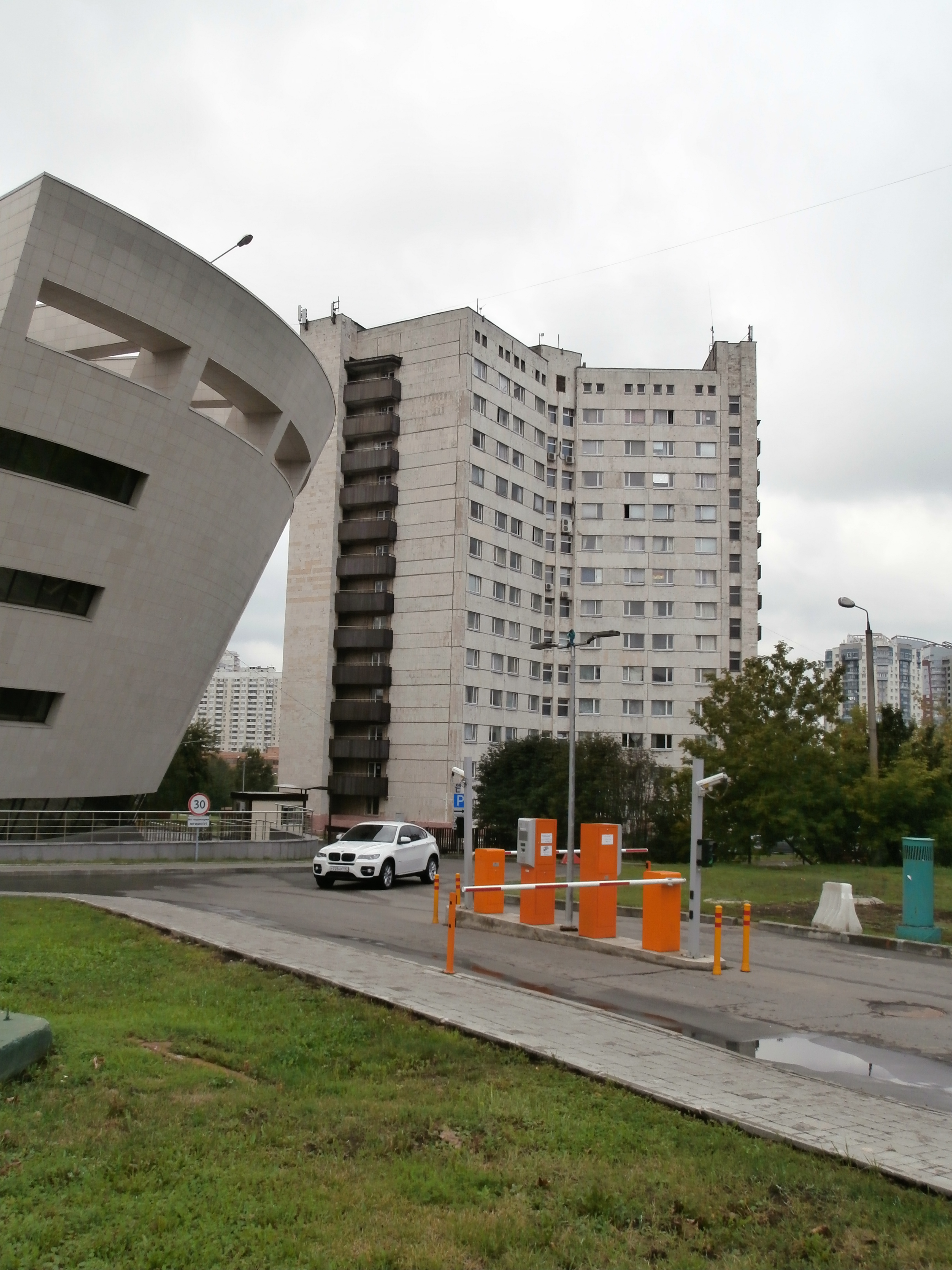 I shouldn’t have worried so much on hindsight, as moving in turned out to be pretty easy. The security guards were helpful: I told them in very basic Russian that I was a new student, and they pointed me towards the right building. The caretaker on duty (called a komendant in Russian) in the dormitory turned out to be a really friendly lady. She filled out some paperwork, and gave me my keys and bed linen. I saw that she recorded everything she did in a huge journal that had already contained pages and pages of cursive handwriting – an epic saga of the goings-on in Dormitory No. 2, meticulously recorded by all the komendants.

And so I thought, as I was heading to my room for the first time, that I could heave a sigh of relief, and look forward to the start of term. Little did I know that I was about to be confronted with one of the worst bureaucratic nightmares of my life.

The administration had organised an orientation programme (what they called “integration week”) for us. But there was also more dormitory paperwork to be done – namely, we had to sign our tenancy agreements and pay our rent (which is fair enough). Thus, we headed to the Department for International Students to get our contracts. They gave us a form (in Russian) which we had to fill in (in Russian). Unfortunately, that form was not the contract : as we later learnt, that was just a zayavlenie, a formal request to be allowed to stay in the dormitory for the duration of our studies. This had to be submitted and approved before the contract could be issued.

We took our zayavlenie’s  to room 1108, the Office for Dormitories. Outside the office, we saw a long queue of students who had returned from the holidays and were also trying to get their paperwork done. It was a dismaying sight. After waiting to be served, we realised that they had no idea what to do with us international students . Apparently, they didn’t have our names on their list (never mind that we were already given rooms in the dormitory and had moved in)! Many frantic calls to our programme administrator and a few more hours of queueing followed.

Eventually, we managed to get the coveted second signature. Time, then, to take the zayavlenie‘s back to room 1037 for a stamp and then to the Department for Contracts (its full name is the grandiloquent “Department for Accounting of Contracts and Fulfilment of Obligations”) at room 429. It happened to be conveniently located at the other end of the university.

Of course, there was another long queue outside room 429. By this point we had already spent at least two days filling in forms and queueing. We had no idea what was going on, and there seemed to be no end in sight. People were tired and hungry, and tempers were fraying. I remember that at that point, some of us had to buy takeaway lunches for the whole group, while the rest held fort in the queue!

After a few more hours, we received our contracts (in Russian) – one for the dorm, the other for utilities – and had to fill in the blanks on them (in Russian). 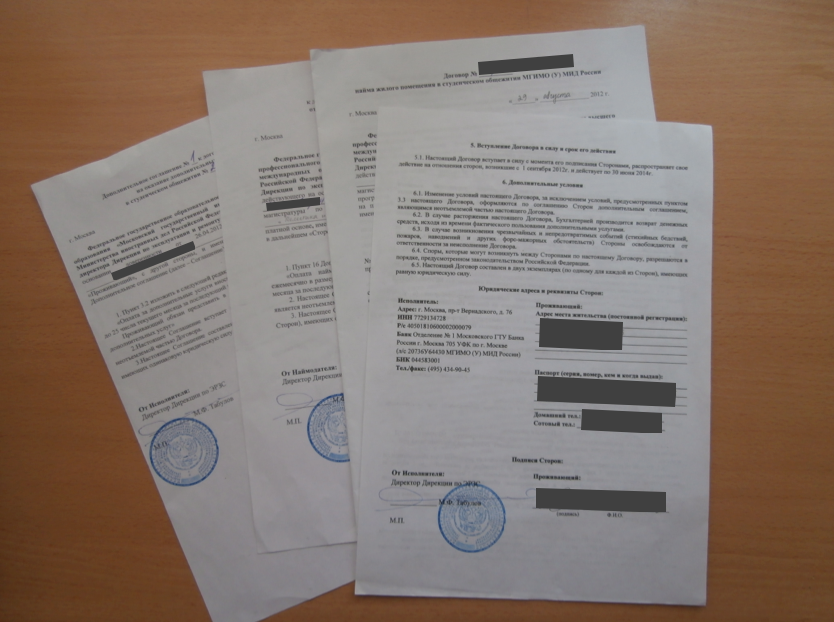 Once these were signed and stamped, we were given a kvitantsia. While Google Translate claims that kvitantsia means “receipt”, this was not a receipt (or not yet at least). It was more like a payment slip, which we had to present at the bank.

To the bank, then. After enduring another long queue (3 more hours of my life wasted), we had to wait as the teller entered all our details into her computer (name, faculty, course, passport number, address, mobile phone number), accepted payment, and stamped our kvitantsia‘s.

The stamped kvitantsia had to be taken back to room 1037 for another stamp, and then it had to be taken together with the new receipts printed at the bank to the office of the director of Dormitory No. 2. The director photocopied these documents, gave us each a paper dormitory pass (propusk), and briefed us on the house rules.

At last, we were done! After spending the better part of “Integration Week”  in queues, we were finally legal tenants of Dormitory No. 2. There was, however, not that much time for celebration. We still had no internet access in our rooms, and no idea how to get internet. Our access cards – which we needed to enter the university without having to show our passports to the security guards  – were not ready, and one of my friends was asked for a bribe when he tried to collect his card. The polyclinic refused to register us as they did not recognise our health insurance. We had to fill in even more forms to get our student metro cards, library cards, and student visas. And, to pay for our rent, we have to go through the same laborious process of queueing at the bank, bringing the kvitantsia‘s to the director, and getting a new propusk… every month. 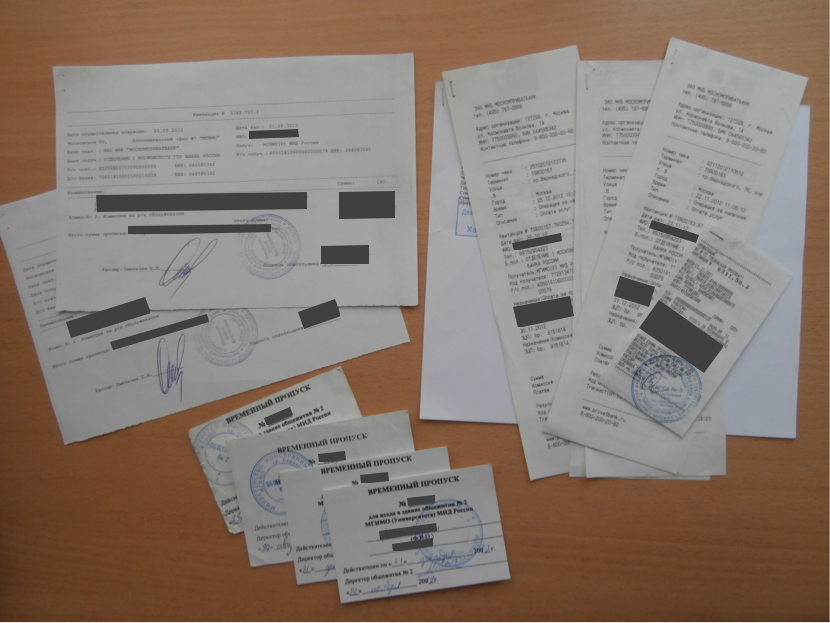 This experience really made me appreciate what we have in Singapore: while we do have some bureaucracy back home, I don’t think it ever gets as crazy as this!