Last month, Mike and Dali shared with us about life on exchange

in their respective host universities in India and South Korea. (For a refresher, click here!)

In this episode, they talk about something all Singaporeans love – food. Join us as they bring us tales of their gastronomical adventures! 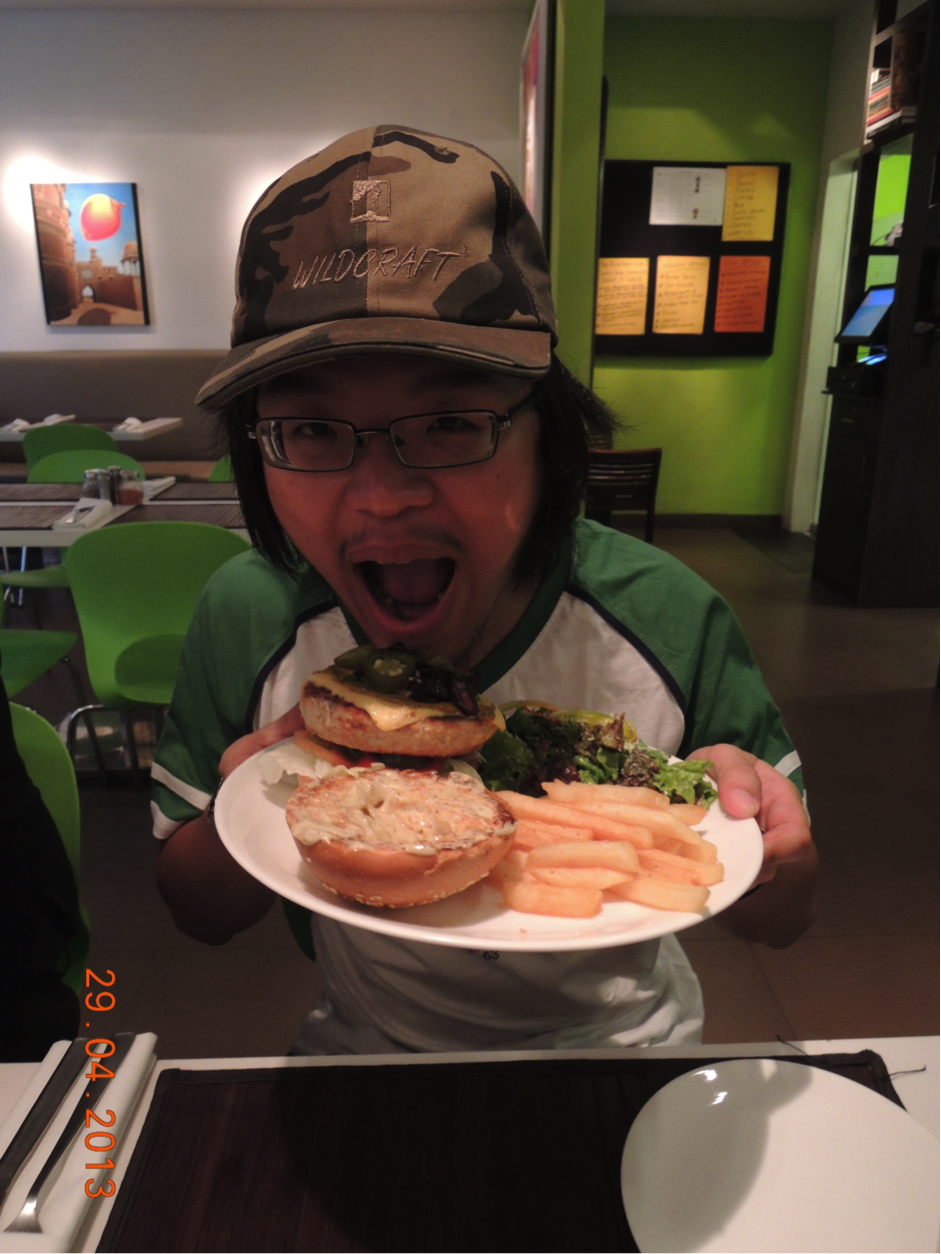 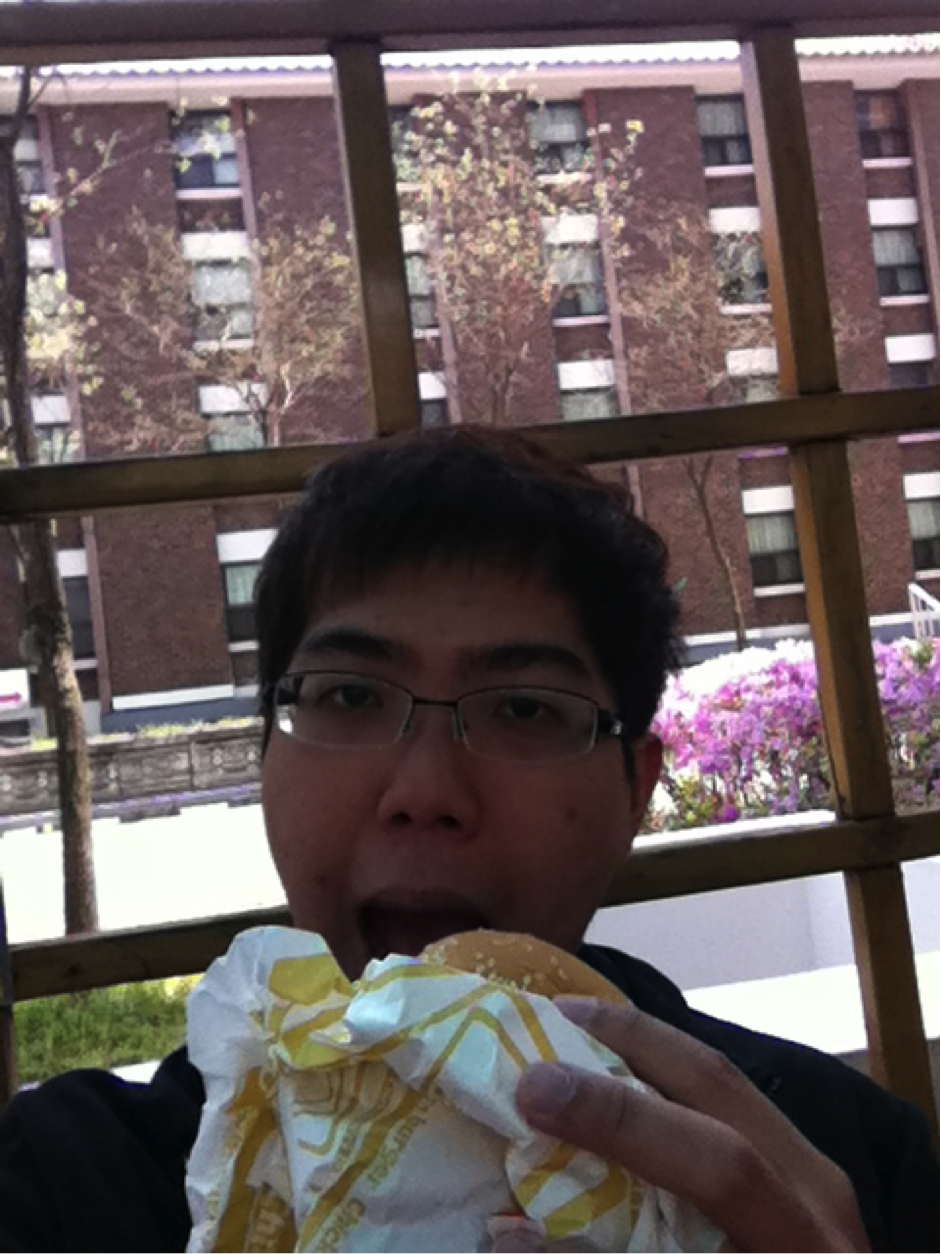 Stretching our jaws for burgers!
Mike (left) in Guwahati, India, and Dali (right) in Seoul, Korea

Mike: Hi guys! I’m so excited to talk to you about food! In India, the variety of food depends largely on the area. For example, in major cities like New Delhi and Mumbai, there are many more choices. Other than typical Indian food, there are your usual Western fast-food chains like KFC and Domino’s Pizza, Manchurian, Mexican and even Chinese. Most restaurants advertise different cuisines on their menus, but do not expect them to taste exactly as they do back in your hometowns, probably because they have different styles of cooking.  There are only a few restaurants that serve good international cuisines.

As Northeast India is not as developed as the other parts of India, there are not many alternatives available. At IIT Guwahati, the school is a one-hour journey from the city centre, so students prefer to have their meals in their respective hostels

on weekdays and eat in the city when they have the time on weekends. A typical breakfast: Bread and jam Dosai: a popular breakfast for students on weekends Lunch on a weekday

Hostel food is actually quite decent, but there is a difference between having to eat hostel food occasionally in Singapore and eating it on a daily basis here. It took me two weeks to get used to the food here, and during that period, I survived a lot on potato chips and biscuits. I think Indian cuisine emphasizes strong flavours and often use spices and lots of onions. Don’t expect green leafy stir-fried vegetables with oyster sauce; Orange is a colour you’d better get used to!

Typical dishes consist of dal, a common thick stew across India made from peas, and sambar, a Southern Indian vegetable stew. They are usually eaten with rice and other ingredients. You can also find naan, roti and chapati here, which can all be found in Singapore as well.

If I am bored eating at the mess, I will go to the restaurant at my school. This is my typical combo! My favourite Indian dish would have to be tandoori chicken! 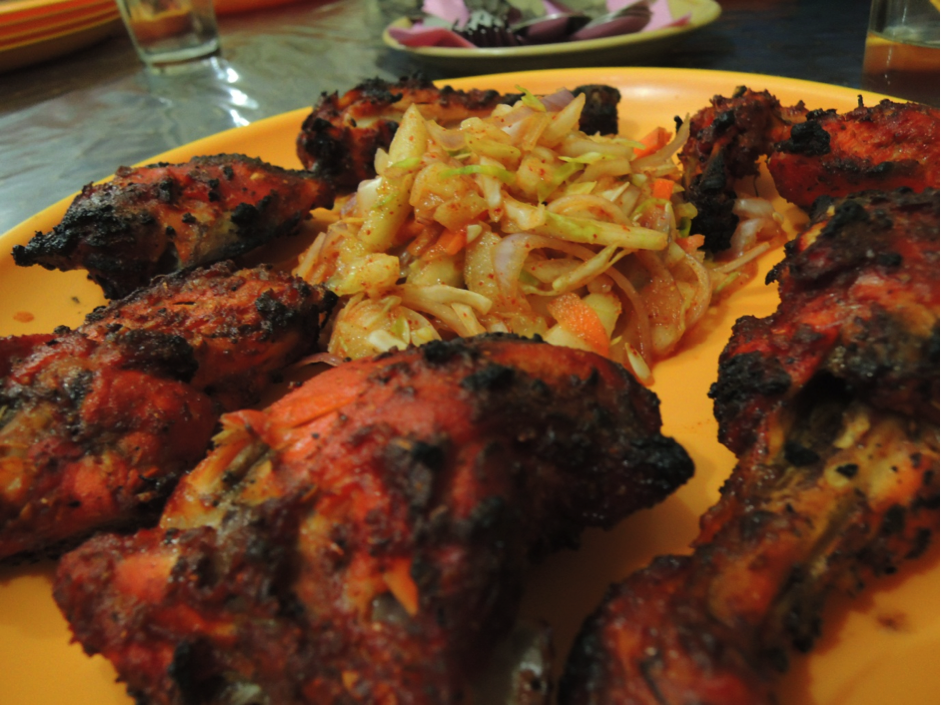 Tandoori chicken at a restaurant in school

Something interesting to note is that Indians have a culture of eating with their hands. In India, people worship food. Food is a delicacy. They believe that since food is made with the hands, a person has to eat it with their hands. Hands must be washed before the consumption of food. It is a custom to share food with anyone who wants it, and would be rude of your host not to offer you food multiple times. It is considered basic courtesy that everyone waits for the entire table of people to finish their food before leaving together. During the wait, they can leave temporarily to wash their hands but must return to their seats. They usually order multiple dishes and each dish goes round the table, so that everyone gets a taste of everything.

Dali: Wow Mike! It’s a little different here in Korea. In Seoul, the variety of food is simply amazing! There are so many types of food that you can choose from. Apart from the mega fast food chain stores such as KFC and McDonald’s everywhere, there are also many smaller restaurants littered along the streets. These restaurants usually serve Korean cuisines, but restaurants serving Chinese, Japanese and Western cuisines can be readily found too. However, most of the international cuisines served have a tinge of the Korean culture. For example, they sell bulgogi (a popular type of grilled, marinated beef) burgers in all of the mega fast food chain stores, something that you will not see anywhere else. It’s also common practice to serve 반찬 (banchan) along with the meal, even though the food itself may not be Korean. 반찬 refers to the free side dishes served together with the meal. 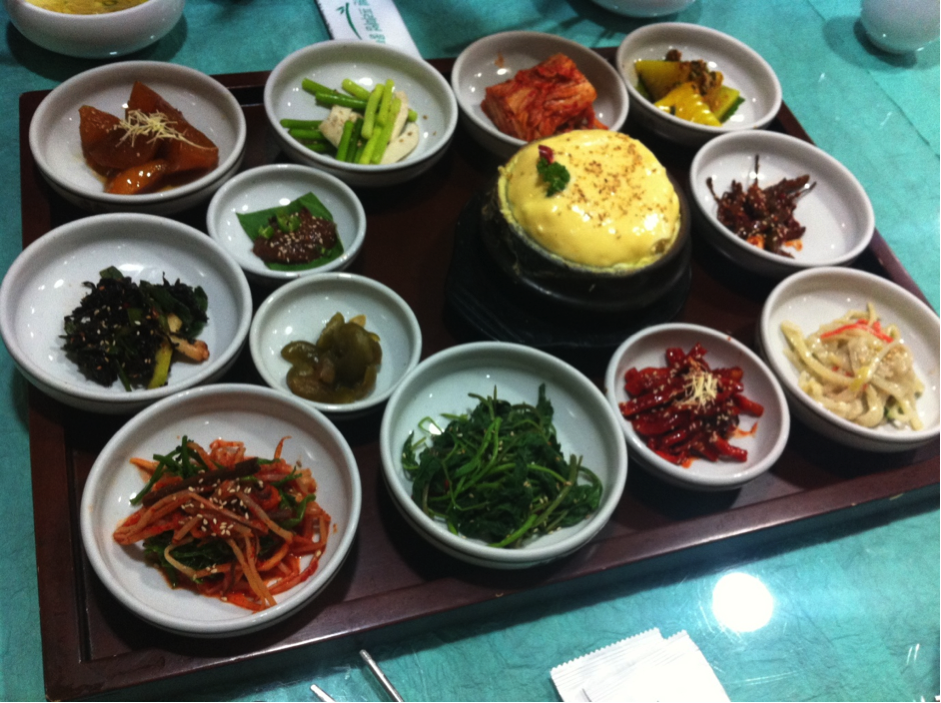 Just look at the spread of 반찬 alongside my serving of mixed rice at a famous store in Jeonju!

As I ate Korean food on a regular basis back in Singapore, I quickly became accustomed to Korean cuisine here. Many Korean dishes are really spicy, so be warned when you order a dish labelled as spicy. It is also common to have meals without meat (much to my dismay!). However, such meals are served with generous portions of vegetables, so it still satisfies your appetite! Mike: Many of you may be wondering about cleanliness of food. Singaporeans, take heed! I think many of us are too used to high standards of hygiene, which may pose a problem for us in India, or anywhere else in the world you travel to. I had a serious case of food poisoning in India. It started when I was at Sikkim for a short trip to the Himalayan region and the host gave us water that was not boiled for drinking, which gave me a series of runs the next few days. Always boil your water before you drink it in India.

Also, try not to buy ice cream cones from the roadside ice-cream stalls, because the water they use for cleaning the ice cream scoops may not be clean. If you have a craving, buy those that are already packaged. I have heard that the ice used in chilled drinks sold by the roadside vendors are contaminated with dust and dirt from the dragging on the ground, so it is better to avoid them. Lastly, only buy mineral water with sealed caps from the shops and not from people at the roadsides. In a foreign place, safety is always priority!

Dali: Yes! I had the same problem here in Korea! Unlike Singapore, tap water in South Korea is non-potable. It is slightly discomforting that the tap water here is a little off-white and slightly translucent, not the pure and crystal-clear tap water we are used to in Singapore. So, like Mike says, always boil your water before drinking it! We cannot emphasize the importance enough!

Talking about food safety, I had a case of food poisoning while I visited Busan over the weekend for the Spring Flowers Festival. We went to this wet-market-styled sashimi place, where the first storey of the place is a larger wet market for seafood and the second storey has many restaurants which sell seafood, both raw and cooked.

Once you place your order, the store owner will go down to get the live seafood and then come back up to cook it, so it’s really fresh. We ordered a huge variety of sashimi and it was quite delicious. However, soon after I got back to Seoul from Busan, I had fever and diarrhoea. It lasted for 4 days, resulting in me having to miss almost a week of class. Shortly after, I ate raw fish sashimi again at a Japanese buffet restaurant and had the runs again for a few days. I conclude that the raw fish here may not be as cleanly prepared as in Singapore, so an early warning to people who cannot take raw food! 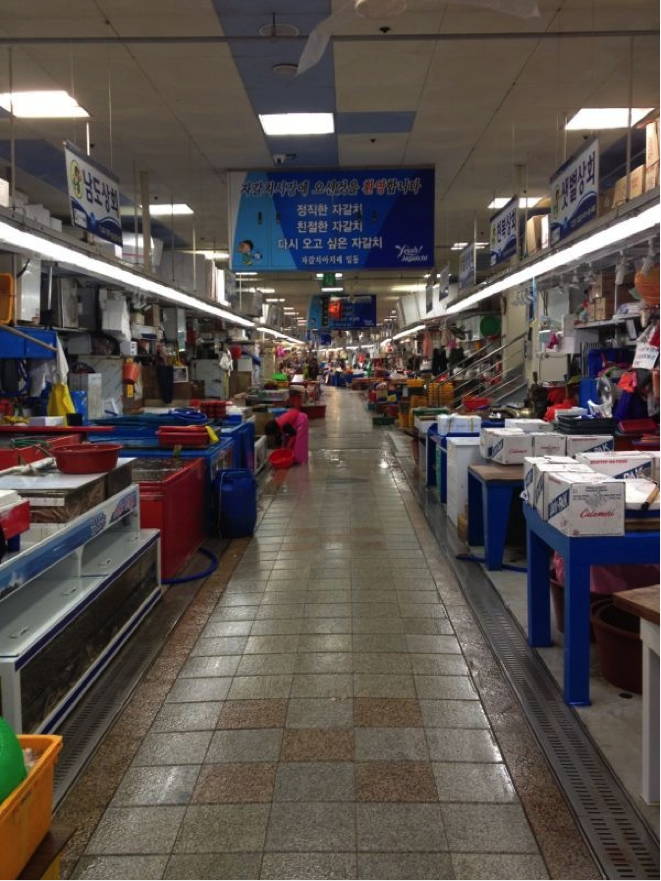 Mike: Groceries are cheap in India, especially local produce. Vegetables and fruits are sold the same way as the wet markets in Singapore, without the use of packaging and refrigeration. Hence, people usually go to the stalls early to pick the best quality goods of the day.

In India, you can find roadside stalls everywhere. There is a general lack of urban planning and you will see makeshift stalls sprouting all over the place. There are just so many small stalls selling the same kind of produce, so there is no lack of substitute if you do not find your favourite stall. Most of them are found at road junctions and near major landmarks such as shopping malls where human traffic is good. As roadsides can get very dirty, it is essential to always wash off the dirt and dust before consumption. Many roadside stalls selling the same kind of products

For poultry, they are slaughtered on the spot, so the freshness is there. I have witnessed the slaughtering and cutting of a chicken, which I could not possibly see in Singapore (not for the faint hearted).

Imported goods can be found in certain shops. I managed to find Yeo’s beverages in India, but they are more expensive than in Singapore. The good thing about India is that prices for packaged products are always standardized and indicated on the packaging, so you can plan your expenses more easily. There is no price competition for standard goods. The interesting thing I found was that there are two different pricings for some products between the northeast and the rest of India, which up till now no one can offer me an explanation. 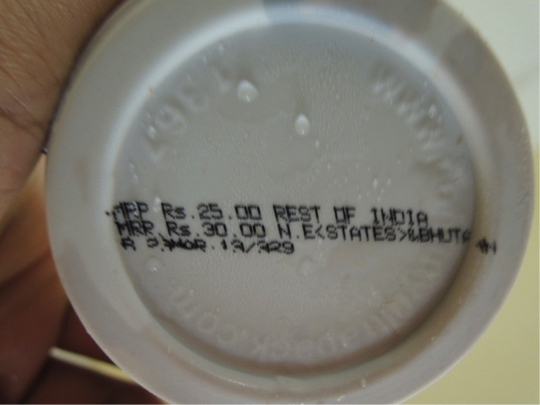 Dali: For me, grocery shopping is usually done in supermarkets here, not unlike those found in Singapore such as NTUC and Carrefour. The type of groceries found here are similar to Singapore too. However some bigger supermarkets have a section specifically for the different types of kimchis. Supermarket near to my university, Nakseongdae, South Korea Some of the products sold in the supermarket. Nakseongdae, South Korea

One can also do their grocery shopping in the traditional markets, where prices are usually cheaper and bargaining with the store owners is possible. The store owners will usually give us a discount when we emphasize that we are poor exchange students from Singapore because Korean Ajummas (aunties) and Ahjussis (uncles) are nice like that! 🙂 Mike: What type of street food do you get in Korea, Dali? In India, common street food in include panipuri (fried Indian bread), samosa (potato puffs), MoMo (dumplings) and kachang puteh (mixture of nuts). The most popular street food I think would be the panipuri, judging by the number of stalls selling it. In Guwahati, there are numerous tea stalls as well, since it is located in Assam, which is well known in India for its tea cultivation and tea drinking habits. 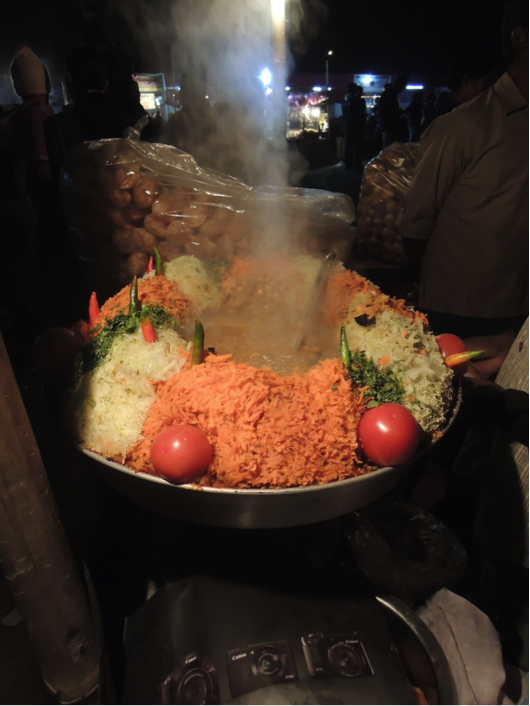 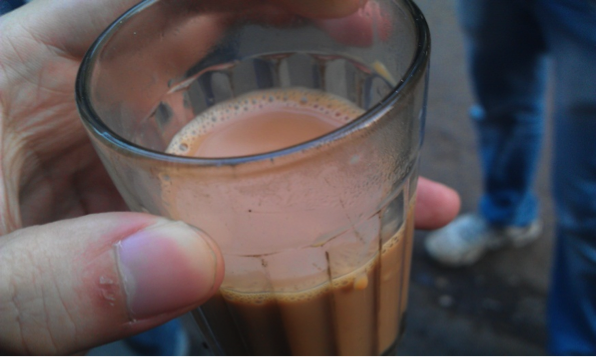 Elaichi Tea can be found everywhere, each small cup costing around 5-6 rupees.

Dali: In Korea, we can easily satisfy our hunger with the wide variety of street food stalls found along any busy street. The more common types of street foods include the famous 떡볶이(tteokbokki), rice cake cooked in a spicy sauce called 오뎅 (odeng), which is sort of like fish cakes boiled in a special broth, and 순대 (sundae), which is called blood sausage because of its colour, made by filling cow’s or pig’s intestines with glutinous rice and other ingredients. When it comes to Korean food, two types of food are my definite favourites. One is Korean BBQ. It is just simply AMAZING. I would recommend it to anyone who is going to visit South Korea to at least try this once. There are different varieties of meat served too. Pork and beef are the more popular choices here, with almost every part of the meat being served. I highly recommend 삼겹살 (samgyeopsal), otherwise known as the pork belly meat and 갈비 (marinated beef/ pork ribs). Meat lovers will love these, and non-meat lovers will be converted to one after trying these. 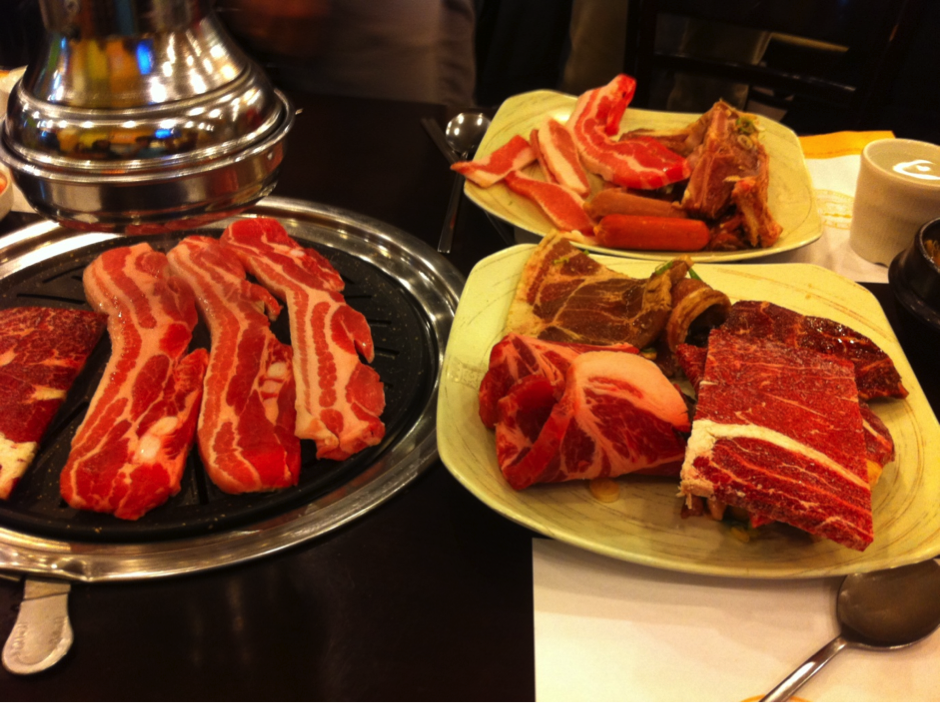 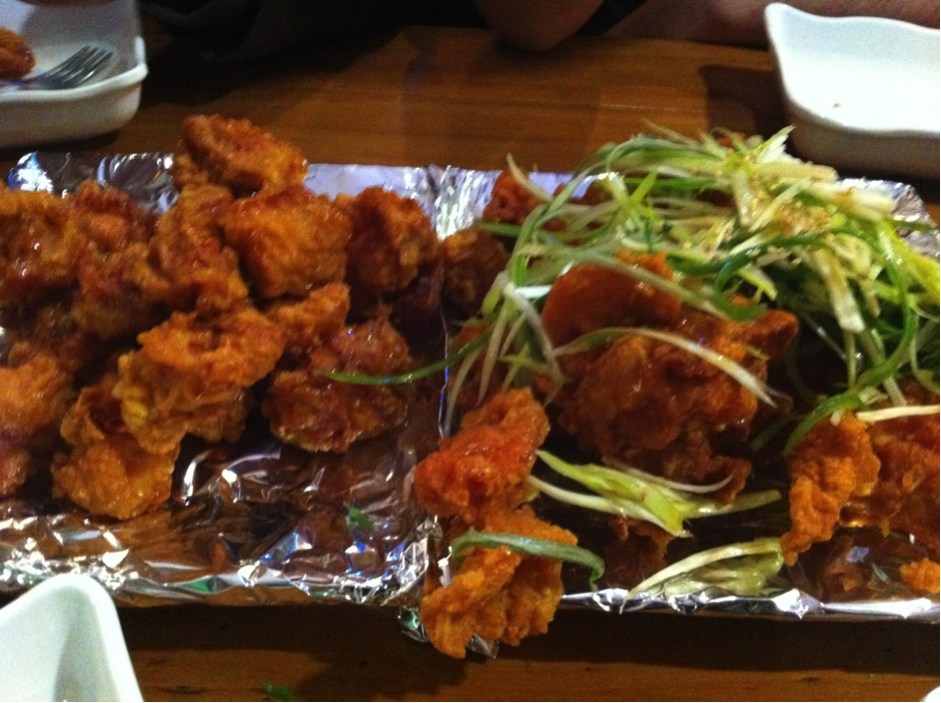 Mike: Ahh now you’re making me hungry! Can’t wait when we tour South Korea together! Maybe you can come to India soon too!