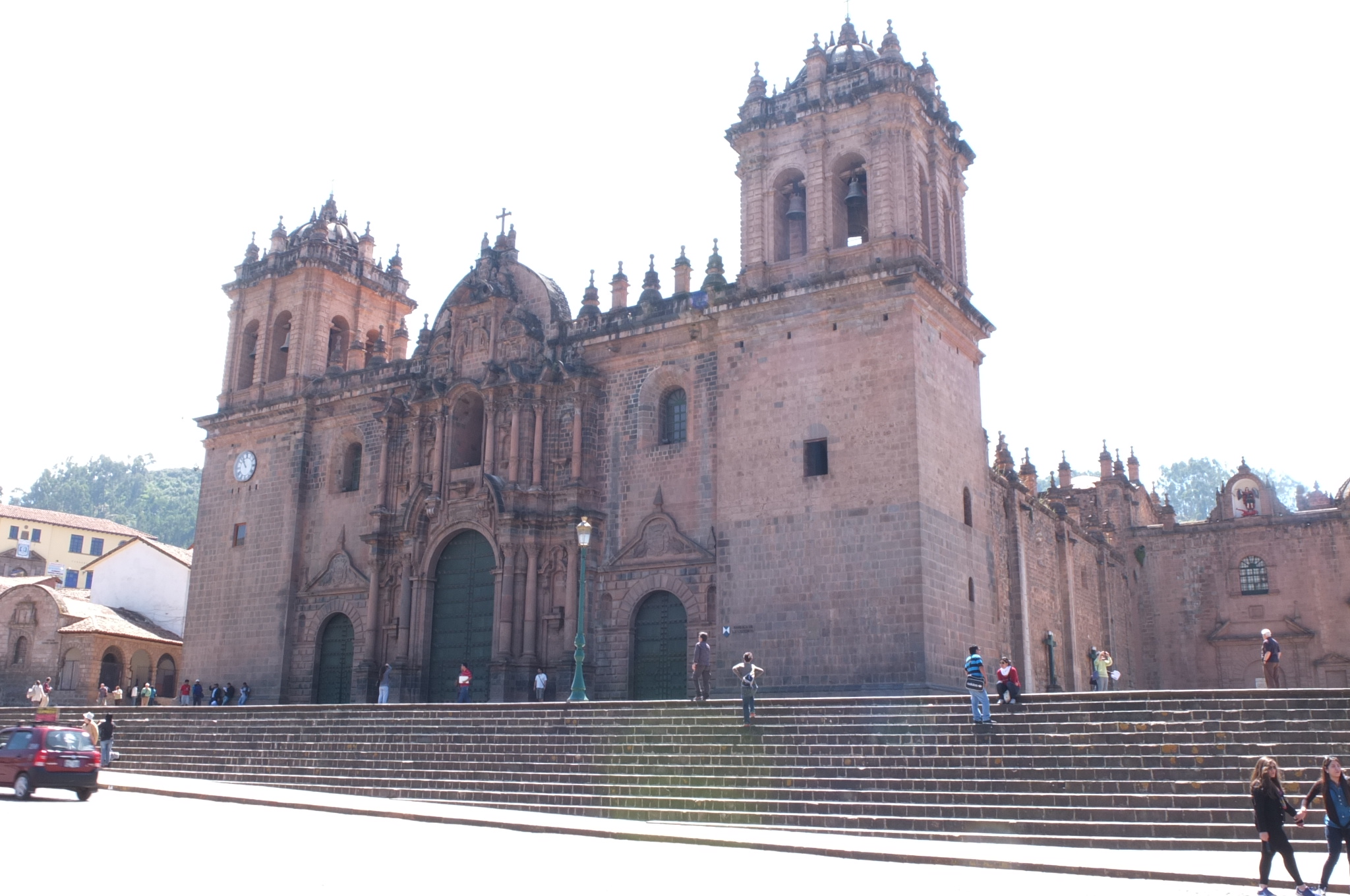 There is a stark difference between Peru and Chile. Chile is very much modern and might think that you were somewhere in Europe, what with its cafe scene and retro shopping lanes.

However, the streets of Cusco smell of an ancient aroma that takes you back into history. Cusco was the ancient kingdom of the Inca people. The city is designed in the shape of a Puma, one of the three sacred animals beside the serpent and the condor.

Most people who come to Cusco also plan to go Machu Picchu.  Hence, the whole city is very touristy and sometimes you feel that is a little bit too familiar and commercialized. Cusco is also situated at more than 3000m above sea level and for us island-farers, it’s something uncommon for us.  The air is definitely thinner with less oxygen and our lungs were not accustomed to it. 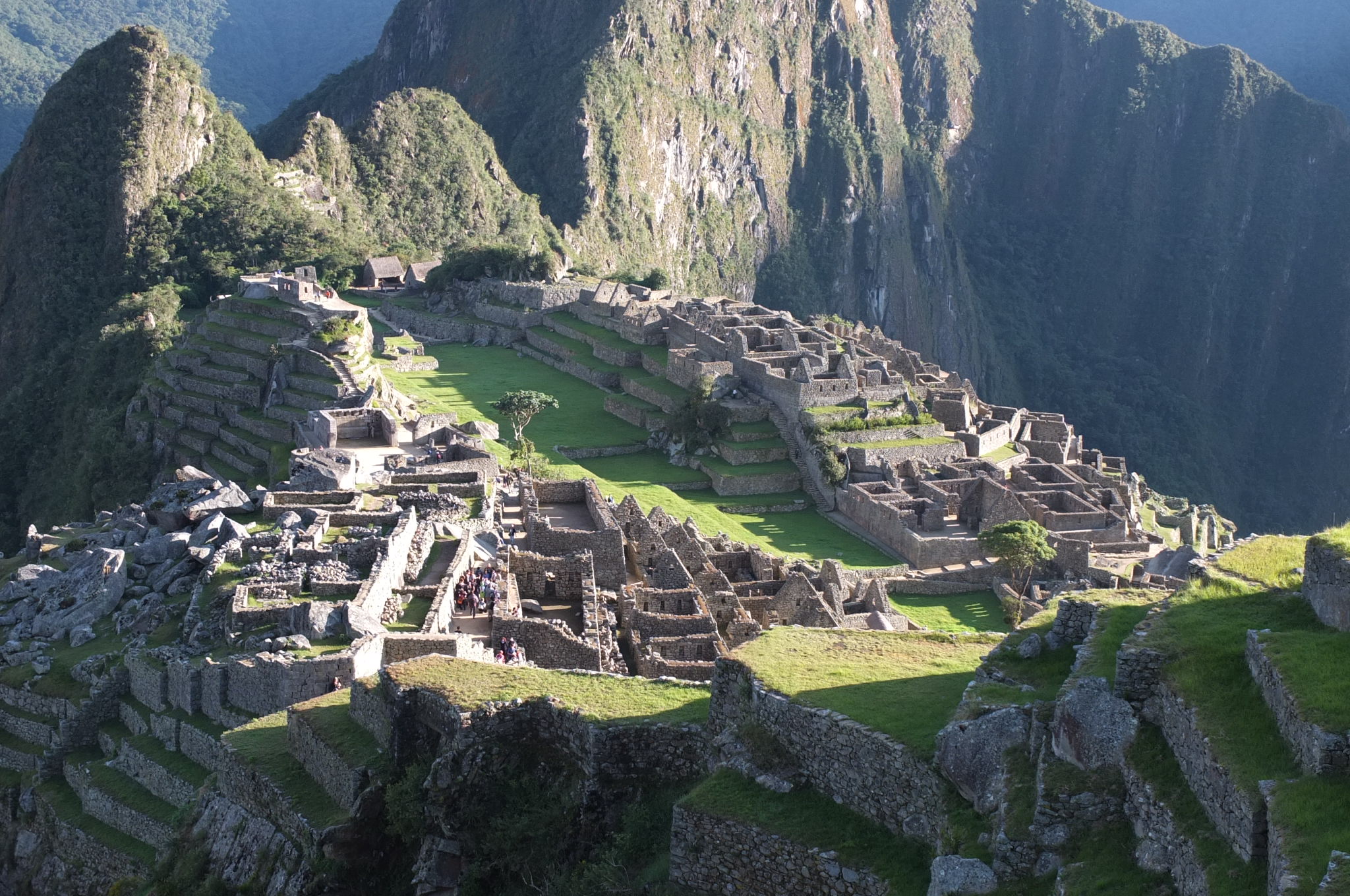 On hindsight, we should have travelled up to Cusco through Lima by land so as to allow our body time to acclimatize.  This is very important as we all were victims of altitude sickness to different degrees.  Anyway, we planned different routes to reach Machu Picchu. Hui Juin and the girls did the conventional 2 days 1 night trip by train and bus while I did the 4 days 3 nights Salkantay trek and met them at Aguas Calientes. 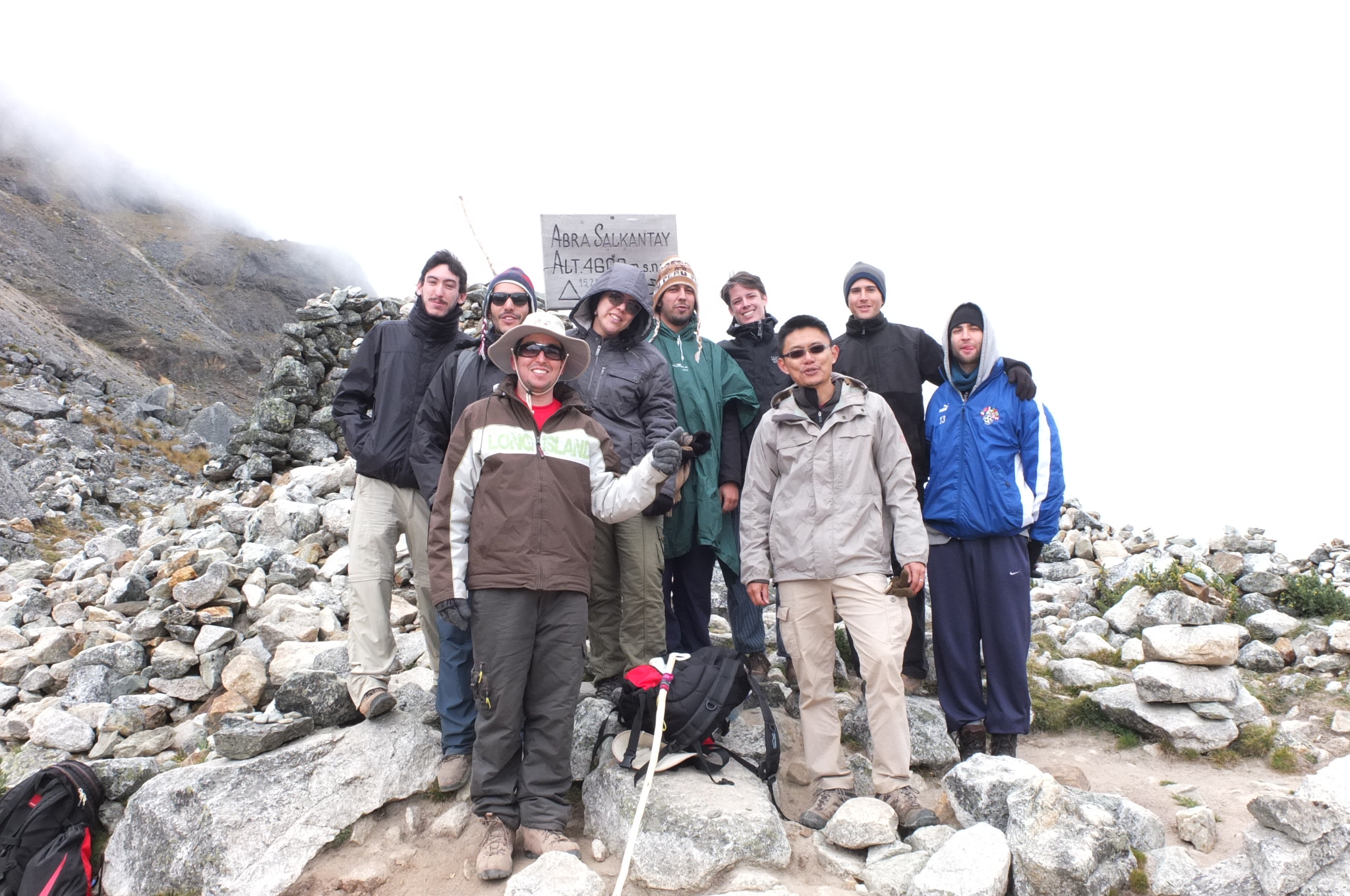 After two days in Cusco, I left early on the third morning for the trek and began my adventure to Machu Picchu. My group of 11 Trekkers consisted people of all nationalities.  There were American, French, Canadian and Brazilians. I was the only Asian in the group, and also the oldest at 37.  When I first signed up for the trek I did not think too much about the physical requirement as I thought it would be manageable

. However, after having been through two surgeries on the knees and having had a lack of consistent exercise, I did feel the toil on my body during the trek.
The scenery of the trail was amazing and very different from the experience of sitting in a bus and viewing it through the windows.  Here, we trekked with the elements of the weather. You began with many layers of clothing in the early morning. We usually started trekking at 6am in the morning and reached campsite at 5pm. It was definitely no walk in the park and on some stretches, we were ascending slopes of 70 degrees, which made us go on all fours. I managed to completed the trail.

Well, I survived the trek but not unscathed. When I returned from the trek, I discovered there were some rashes on my back. After seeing a Doctor, I realized I had Herpes zoster. Herpes zoster is a virus that lies present in one’s body after having chickenpox at a young age, which is likely to be reignited when the body is going through extreme stress.  Well, luckily with the Doctor’s prescription I am feeling better now.
Hui Jun had a few bouts of intestinal and stomach problem throughout the trip, sometimes lasting for up to 5 days. Not necessarily from the food we ate, but could be a combination of long travelling time and altitude induced problems. The girls were also down with common coughs and fever. We were prepared for this, and fed the girls medicine when appropriate.  At the same time, we had Travel Medical Insurance that we could claim later.  Despite all these hiccups, we would not trade off the experiences for anything less. Talia having fun in Machu Picchu.

The Tourism Industry in most of South America is still very much catered for the Mass Tourism. We tried to avoid joining tours as much as possible and went about our own itinerary. This meant that there was no pick-up at airport or bus terminal and we had to carry all our own stuff when we moved from one place to another. This was normally possible and fairly straightforward, except when the arrival time was late at night or early in the morning. This meant that both Huijun and myself have to become Superman to carry both the two girls and still carry all our luggage with us.  We don’t know how but we did it.  We even gave our stroller away to one of the hotel staff we met in Bolivia who has a young child.
We did not plan to go Bolivia initially. It was after hearing from other travelers and realizing that we did not plan much for Peru that we decided to spend about two weeks in Bolivia. It turned out to be the surprise gem of the whole trip.  It has some of the most amazing physical landscapes, like the Salar of Uyuni and the beautiful city of Sucre. They may not be as well known as other famous attractions in South America but that means you get a more authentic place to travel. Just like we had not heard of these places before, Bolivians did not know Singapore. They were amazed that my two children spoke English. I had to explain that it is our common language. Dinosaur footprint found on the slope in Sucre, Bolivia. 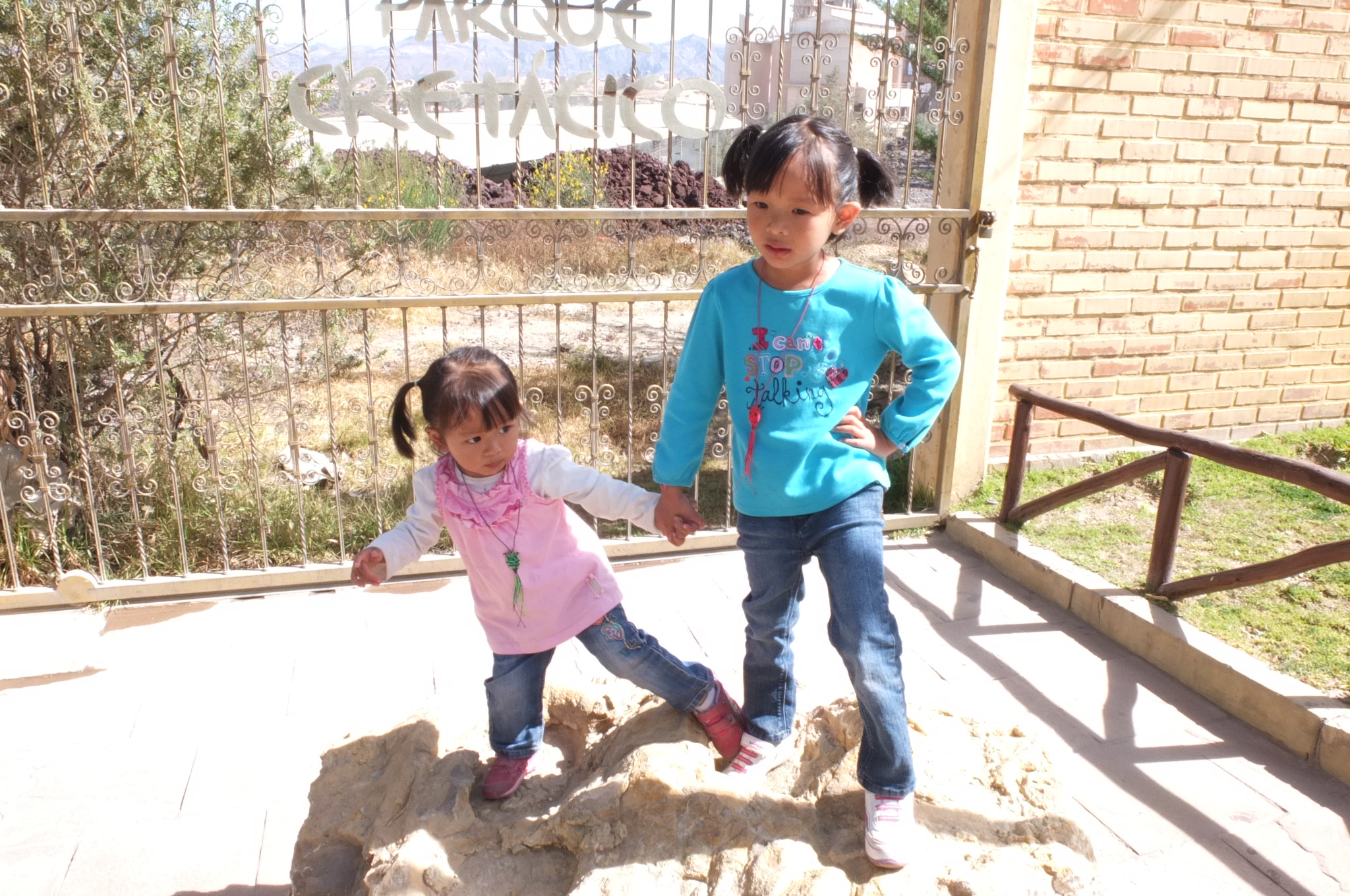 Kaylee and Talia stepping into a baby dinosaur footprints!

We see people who did not possess much material goods, but who are genuinely happy with a simple way of life. Most of the shops in the small town will close in the afternoon for lunch and a siesta. The pace of life is much slower and sometimes we may deem it as inefficient in Singapore terms, but I believe it has its place here.

We travelled to Bolivia via Puno in Peru. The two countries shared Lake Titicaca which is the highest altitude lake in the world. Lake Titicaca from Puno, Peru. The people built their house on reeds. The border crossing is quite interesting. The immigration offices are unlike the developed countries modern and efficient mode. Over here, the offices are one storey buildings that look like houses. You have to queue up at least two times to see different officers. This is where travelling with young children has its advantage.  I think it must be empathy for us as we are usually entertained with polite officer commenting how cute our children are.  Everything is personal and you feel more welcome than compared to being in some developed countries airports.

The Salar of Uyuni is really a unique place. You are talking about 6000 square meters of salt plains. From a distance, it looks like the Antarctic but you are actually standing on ground with 5-7 cm of salt.  This place used to be a seabed until tectonic movement raise up the land and now you can actually walk on surface coral isles. It’s something that I had not even heard of despite my years as a Geography Teacher. There are just so many unknown things in the world that we should keep on learning. 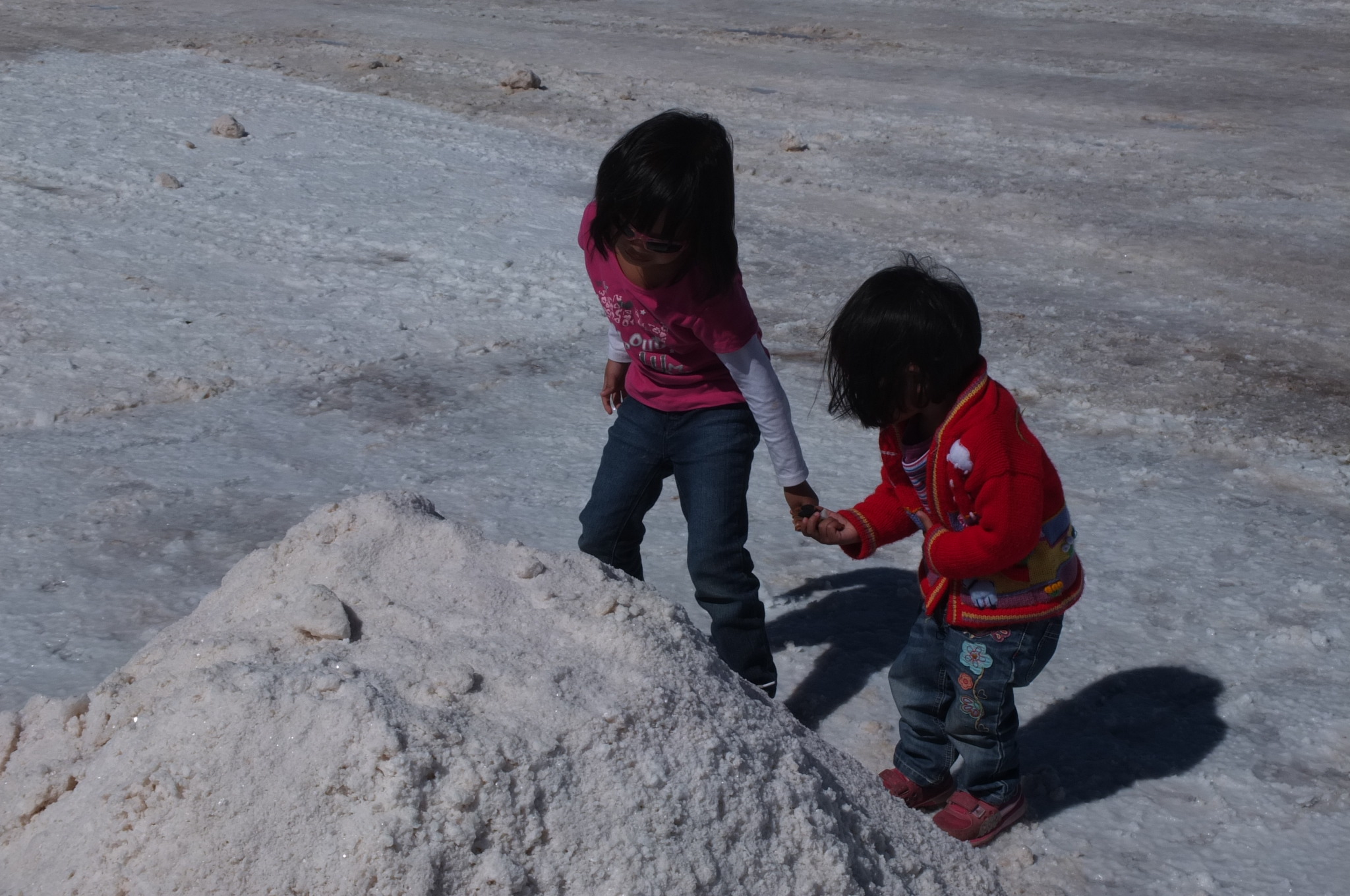 We had fun taking photos in the salt flat. 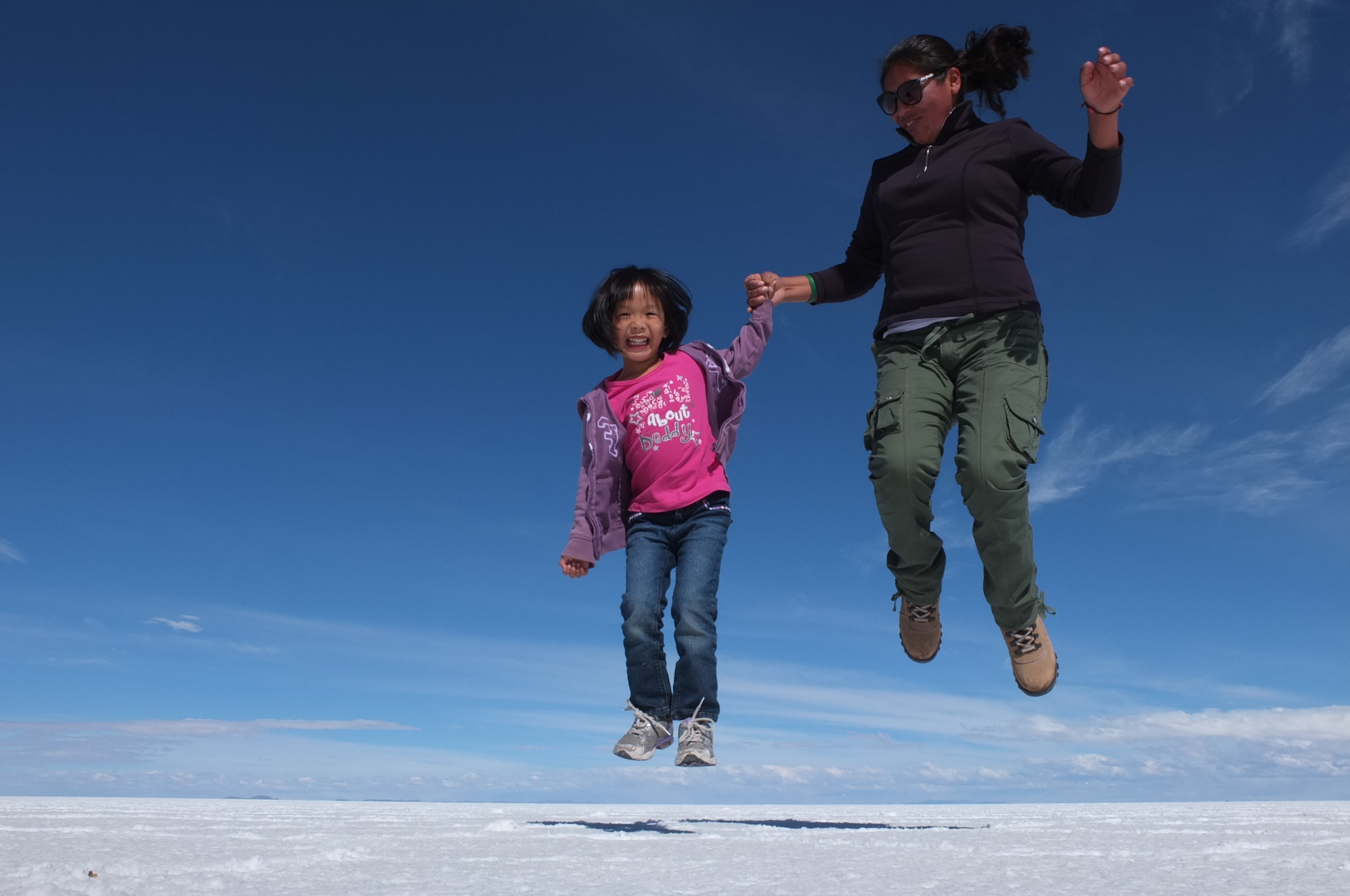 Our lovely guide with Kaylee. Salt flat in the night… can you see Kaylee? Flamingoes found in Lagoon Colorado (the lagon happens to be pink in colour due to the microorganisms present).

We came to South America with some apprehension and zero Spainish.  I leave it with so much amazement and some broken Spainish to get by.  But the bonus point of the trip was the people that we met, fellow travelers, innkeepers, bus operator, guides etc.  Without their assistance and initiatives we might not have gotten through so smoothly. This is a showcase of the wonderful human spirit and common ties that are found in us.