The First Bus – An Exception

My journey started from South Mexico into Guatemala. Contrary to popular belief, the bus ride from the South of Mexico was reasonably comfortable for the price I paid.

The outside of the bus looked clean and the interior was not too shabby either. The seats were decently spaced and could recline enough for a comfy night’s sleep. There were curtains to block out the sun if it was too bright (I preferred to look out at the scenery though). And there was even a constant stream of movies being shown on an old television set. While they were horribly subbed in Spanish, it was still an avenue to lift you out of boredom.

Things were not as rosy on the next bus ride after the border in Guatemala.

We switched to a smaller “chicken bus“. Some people call it the old American school bus. A quick Google search after my ride told me that these were old and unwanted school buses from the United States. Guatemalans adopted these buses, gave them a new lease of life with a bonus new coat of paint.

And just between you and I… I really think that it looked like an offspring of Optimus Prime.  The bus was painted in vivid colours, with conjoining pieces of shiny chrome metal parts gleaming in the sun. 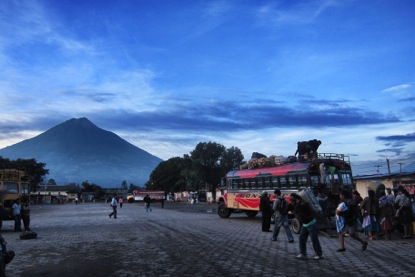 Rules were non-existent when it came to bus capacity. The stated maximum capacity of the bus was 40 yet there wasn’t a time we left the terminal without at least 60 passengers, several bags of frijoles (black beans used in food) and a few live chickens.

It was terribly uncomfortable at the start.Imagine a severely overpacked bus turning left and then swaying to the right at every other turn at 80km/h – I never understood why there were SO MANY turns on the road.

And it sure doesn’t help when the plastic cushions do not provide much of a grip – you slide from side to side as the mini roller-coaster ride continues, hanging on for your dear life. It was dreadful, but I didn’t have much of a choice either; that was the only mode of transport between cities.

The Ride of My Life – With an Old Lady.

On one of my many bus rides, I sat beside an old Guatemalan lady. She was probably in her 60s with her hair tied in two long, white ponytails. The lady wobbled slowly to sit beside me, and stroke a childish grin at me, showing off her few missing teeth.

I feared that her frail body might not be able to make the ride.

Every time the bus swerved, the old lady hung on to the handlebar at the front and laughed. I looked at her, and realised that she was actually enjoying the ride.

“No es divertido?” she turned to me and laughed as the bus turned left again. “Isn’t this fun?” that’s what she said. Talk about the ‘zest of life’ and the ‘right attitude’. This old lady has definitely gotten it right. For once, I decided to stop fussing over the level of comfort of the ride. I held on to the handlebar, and as the bus swerved, the old lady and I went with the flow and laughed together at every turn.

It was the most enjoyable ride of my life.

Nothing screams ‘travelling’ more to me than… a local bus ride.

I will not go as far to say that the lack of comfort never bothered me again. It was still frustrating at times, but I’ve realised that there were always two sides to a coin.

I used to hate it when a third person squeezed close to me on a standard seat that is supposed to accommodate two (which happens all the time); but it did mean that I would be able to at least have a seat when I was that lucky third person.

When I did get the window seat, I would enjoy my ride by looking out at the beautiful landscapes that passed by. Otherwise, I would steal side long glances at my fellow passengers observing how they dressed, behaved and interacted. Nothing screams ‘travelling’ more to me than taking a local bus ride.

The town I lived in had 10,000 inhabitants with a healthy population of expatriates. Hence, you can imagine the excitement when “La Feria” came to town. Literally translated as ‘The Fair’, La Feria is the Guatemalan version of Singapore’s night market. 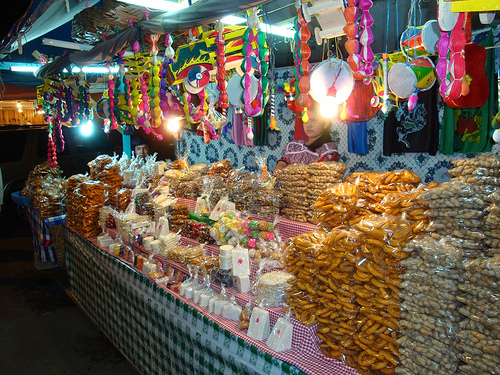 Similar to Singapore, for two weeks, streets are lined with stalls selling street food, together with foosball tables and cheap amusement rides.

It was a beautiful thing to watch La Feria in full swing. The entire town was bursting with life. Neon lights lit up the night, the smell of fried sweet dough wafted through the air while the sounds of laughter and gleeful screams filled the streets.

Anyone can join in the fun. You could go to the music stage where the local bands were playing, or play some traditional street games with your friends. But above all, my favourite thing to do was to take a ride on the Guatemalan Ferris wheel.

On examination, the Ferris wheel did not look safe at all. The seats were made of small wooden planks, stapled together by iron nuts and bolts. The lock mechanism was just a simple latch. Supported by several long rusted iron rods and nylon ropes, the main structure looked unsafe. Still, what’s travelling without some adrenaline rush right?

I don’t remember how, but I managed to convince all my friends to ride with me.

I was already on the ride that was operated by the remains of what used to be a tractor.

We latched carefully onto our seats. As we leaned back, I noticed something that nearly made my heart pop out. The ride operator was sitting casually with his arm folded in a roller chair, operating the ride with his feet! How could something of this size be operated so… loosely?! This was NOT the kind of adrenaline rush I was expecting.

I wanted to jump off my seat, but it was too late. I was already on the ride that was operated by the remains of what used to be a tractor.

To my (second) horror, I realised this ride is nowhere like the Singapore Flyer or the London Eye. Trash your expectations that you are going to relax your soul and take in the scenic view high above.

Nope, Not What I Signed Up For

We watched in amazement (and mostly fear) as the operator shifted gears (with his feet, of course) and the ride got faster and faster until it reached its maximum speed. The view from the top swished passed within a second and I started to experience weightlessness, as if I was on a bungee jump. You should know that I am really not the most adventurous person, and the lack of safety was killing my cells.

I held on to anything I could, wishing that this torturous ride would end.

I turned to my friend to plead for help.

She was having a hell of a time, laughing and screaming as we were thrown up and down by the rapidly spinning ferris wheel. I inched my head slowly and looked around – all the locals were screaming at the top of their lungs, flinging their hands in the air.

How is it possible that I am the only one not enjoying the ride?

“LET IT GO!” My friend screamed as she tried to pull my hand off the metal barrier that I was holding on to for my dear life.

“COME ON! LET IT GO, ENJOY THE RIDE!!!” she insisted. With that, and in one fluid motion, she grabbed one of my hands, pulled it off the metal bar..

And flung it up in the air with hers. 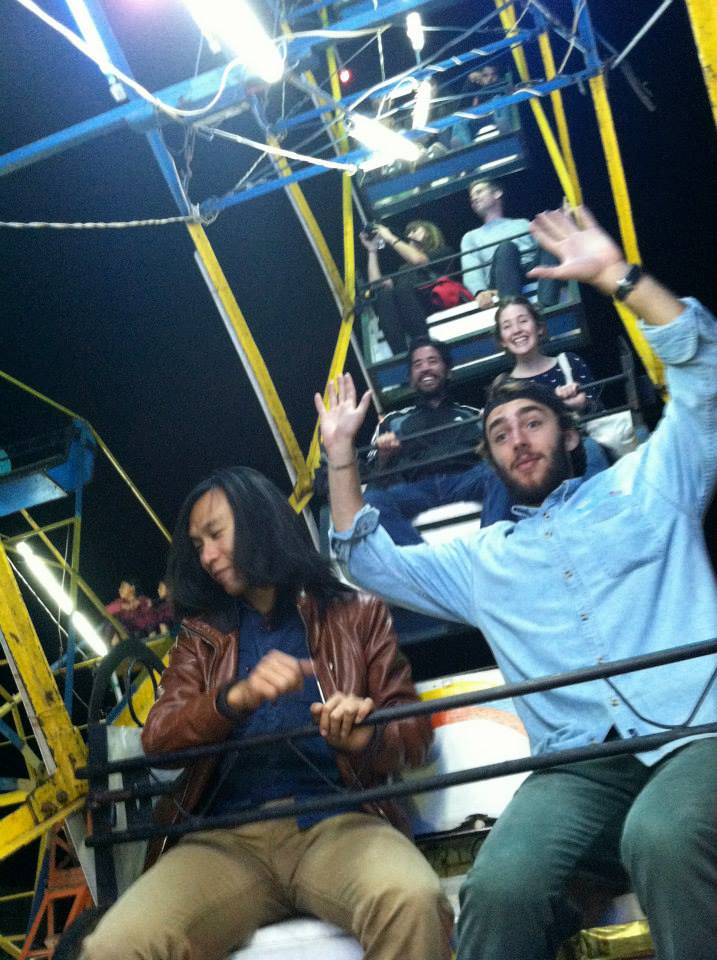 Just when I started to enjoy the ride

I don’t remember most parts of the ride thereafter, except for the fact that I screamed like never before. Before I noticed, the Ferris wheel started slowing down. I too, stopped screaming, laughing and gasping for air as the ride eventually came to a stop.

In that very second, the fireworks display began. A tiny spark zoomed into the pitch-black sky, and exploded into a spectacular splinter of colours, and it was magical.

A minute ago, I was fearful, angry and frustrated at myself for taking this ride. A minute later, the blood that pumped through my veins gave me an adrenaline rush that overtook my fear. I was overwhelmed by a sense of excitement and coolness.