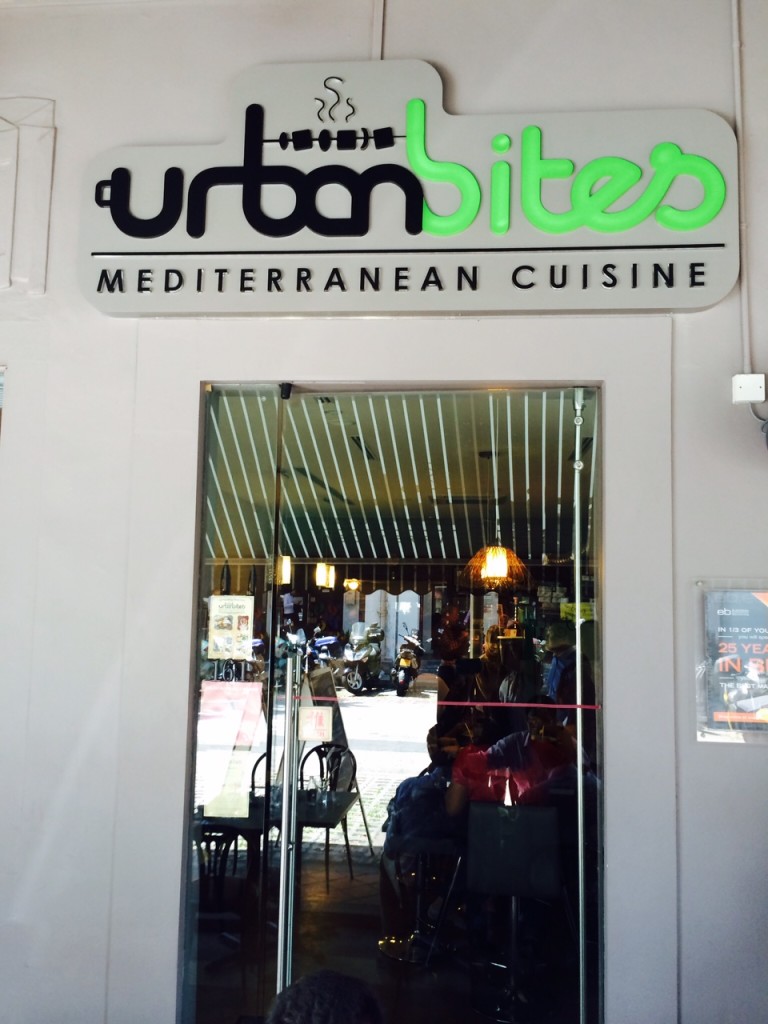 Entrance of the restaurant

Stomaches rumbling, we arrived at Telok Ayer and were lost amongst the rows of shophouses and streams of hungry workers making their way to lunch. Guided by the GPS on our smartphones, we finally found our way and were welcomed to find the by its signature light green sign with the words Urban Bites scrawled on it.

We had made reservations for five but upon reaching, a bespectacled middle-aged Lebanese lady, the madame of the restaurant, gave us a brief frown through her bespectacled eyes and told us that we were very late and they had already given our table away. We glanced around and saw the teeming lunch crowd filling out the restaurant and the queue outside.

It was a sure sign that this place served good grub. When we were finally seated a short five minutes later, the foreign names in the name overwhelmed us momentarily. There were so many choices and we did not know where to start.

Luckily for us, we had Jason Yun on this lunch date. He had travelled to Lebanon for ten days so he knew much more than us. He did most of the ordering for us while we managed to choose our drinks. 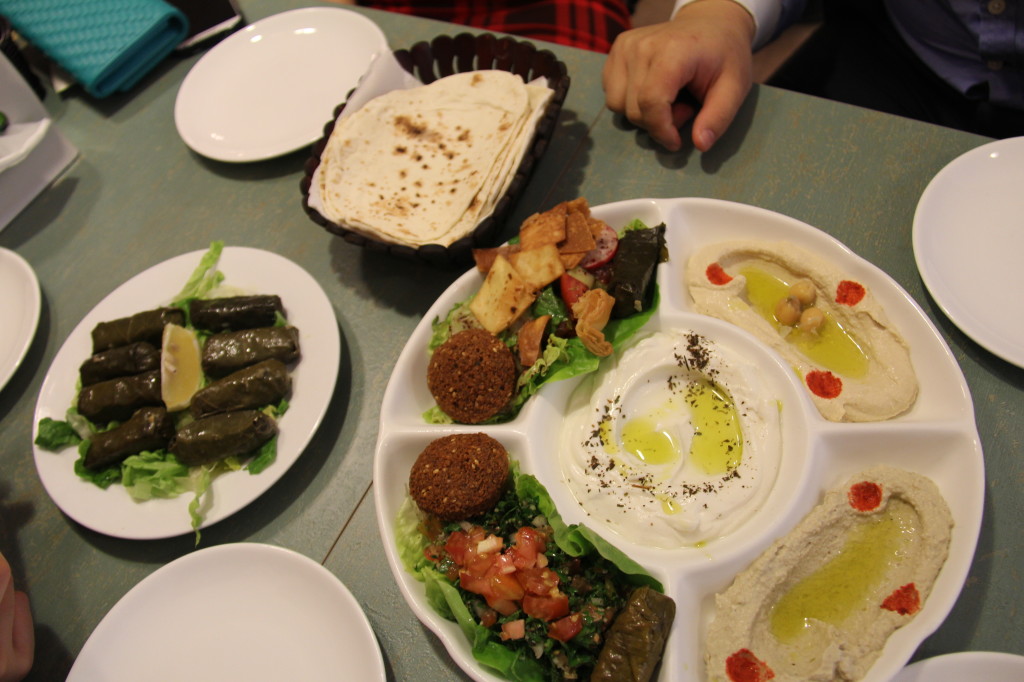 The Mezza Platter was served first. Jason said that this dish was reflective of how Lebanese mostly ate their food – shared and with flat Lebanese bread. The Mezza Platter consisted of hummus, motabal, labneh, fattouch, tabbouleh, falafel & warak enab. Jason’s favourite Lebanese dish is the Warak Enab, or grape vine leaves stuffed with rice and vegetables, which have been boiled in lemon water.

We were all apprehensive because frankly speaking, it did not look very appetizing. On first bite, the sourness burst in my mouth, but subsequently, I began to focus on the chewy texture of the rice. It had a light and fresh taste, which probably came from the rice being soaked in lemon. I do love lemons. I couldn’t help but reach for one more.

The taste of Warak Enab, just like the story of Lebanon was new, and different. 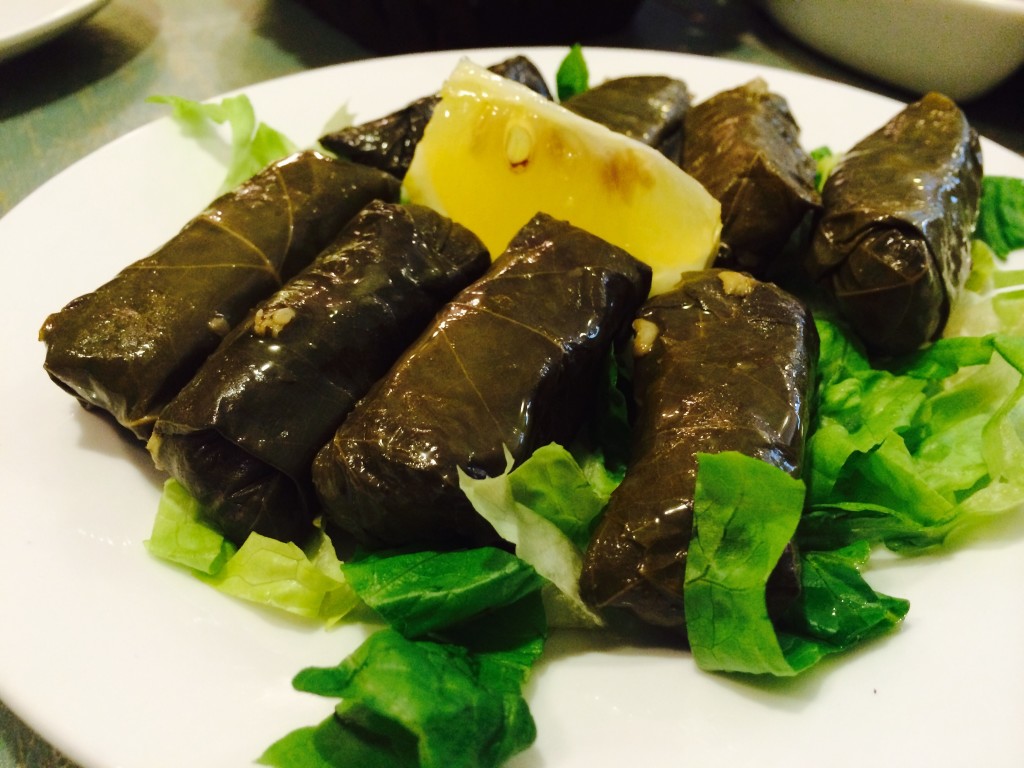 Warak Enab… with a slice of lemon.

Next, there was the more familiar hummus (mashed chickpeas) and falafel (deep-fried ball or patty made from ground chickpeas, fava beans, or both on the Mezza Platter. The falafel was moist unlike previous ones I’ve tried. The hummus (mashed and blended chickpeas) was presented with a dash of olive oil on it and was creamy and light. As though that was not enough, there were still other dishes to be tackled. Motabel is mashed eggplant spread with tahini.

It was difficult to tell the difference between motabel and hummus. They were both creamy spreads with olive oil. There was a white dollop of sauce that was labneh (soft cheese made of yogurt). The platter also had fattouch salad (breaded salad). There were zuccini, romaine lettuce and tomatoes with olive oil and lemon juice. Light and refreshing.

To scoop up the hummus and motabel, you had to use the wraps. The restaurant’s menu had a set of instructions on how to fold the wraps for maximum efficiency. Interesting! 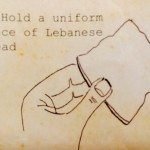 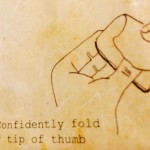 Confidently fold over with the tip of thumb 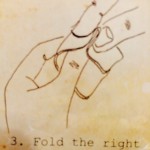 Fold the right side to the centre 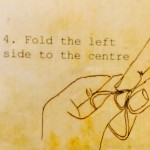 Fold the left side to the centre 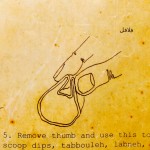 Remove thumb and use this to scoop your dips and sauces!

Next up was grilled haloumi. Haloumi is traditionally made with sheep’s milk, but this white cheese is now commonly made with cow’s milk, and is cured with brine. It was presented with another flat bread covered on top of it. It was a bit like eating tofu. The cheese was firm and not mushy. 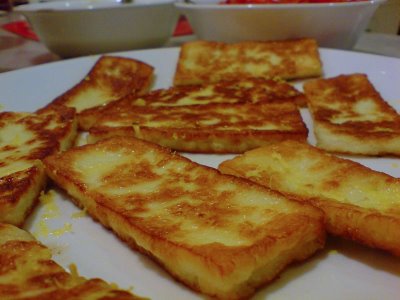 By the time my main dish of eggplant wrap was served, I was really full. There were two wraps given to me but I found the wraps quite bland. The rest of the GoBeyond.SG team devoured the meat kebab platter and raved of its tenderness because it was grilled to perfection. 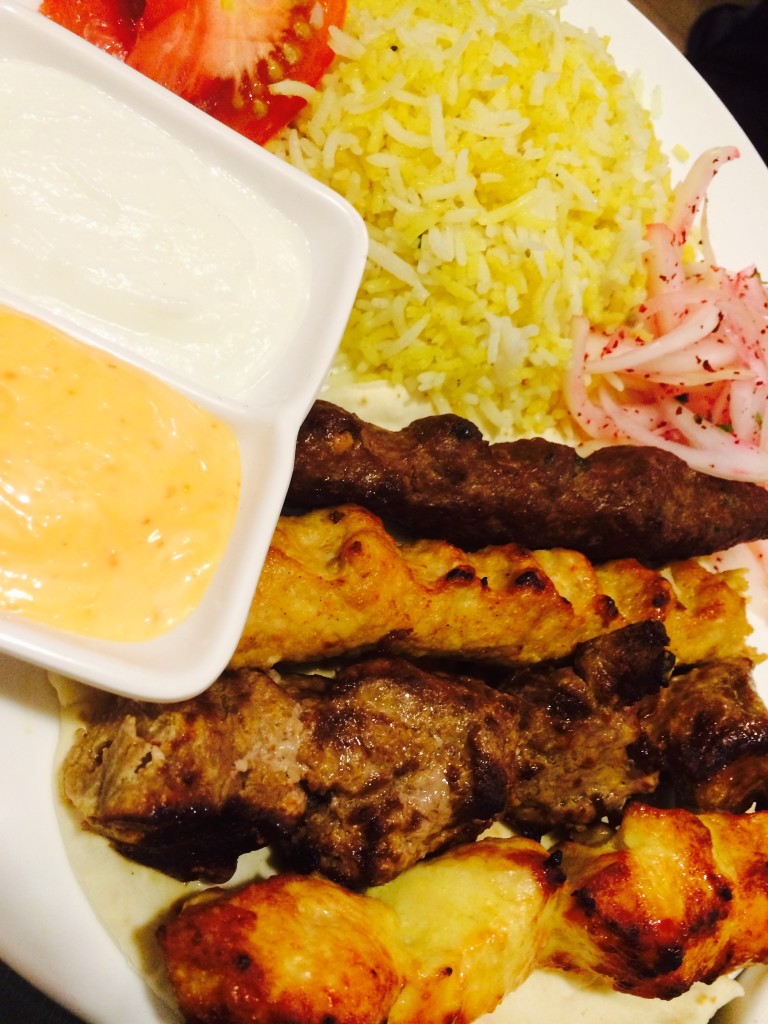 According to Charlene who had the Lebanese coffee, the coffee was not very strong and very much like our own Kopi-O. Jason’s Ayran drink was a cold yogurt beverage which was mixed with sugar, and tasted like Indian lassi. 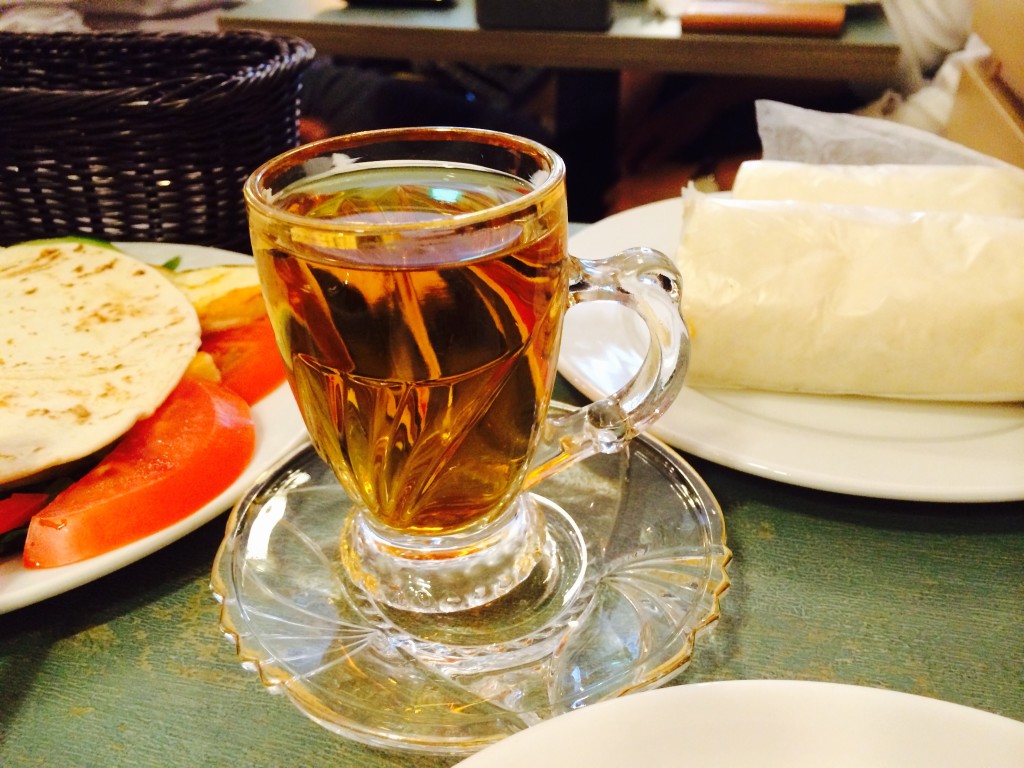 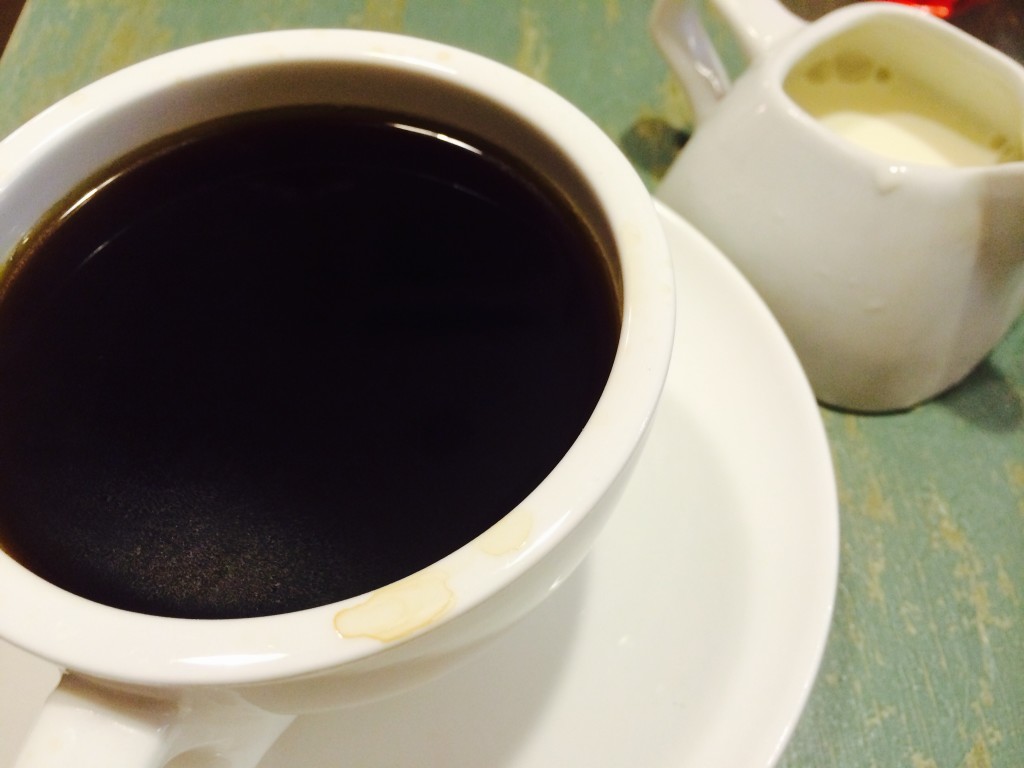 Jason stayed with a Lebanese family and his approval of Urban Bites reassured us of its authenticity. Meals could last up to three to four hours because they will spend a lot of time talking – which we did as well, listening to Jason reminisce about his Lebanese travels. 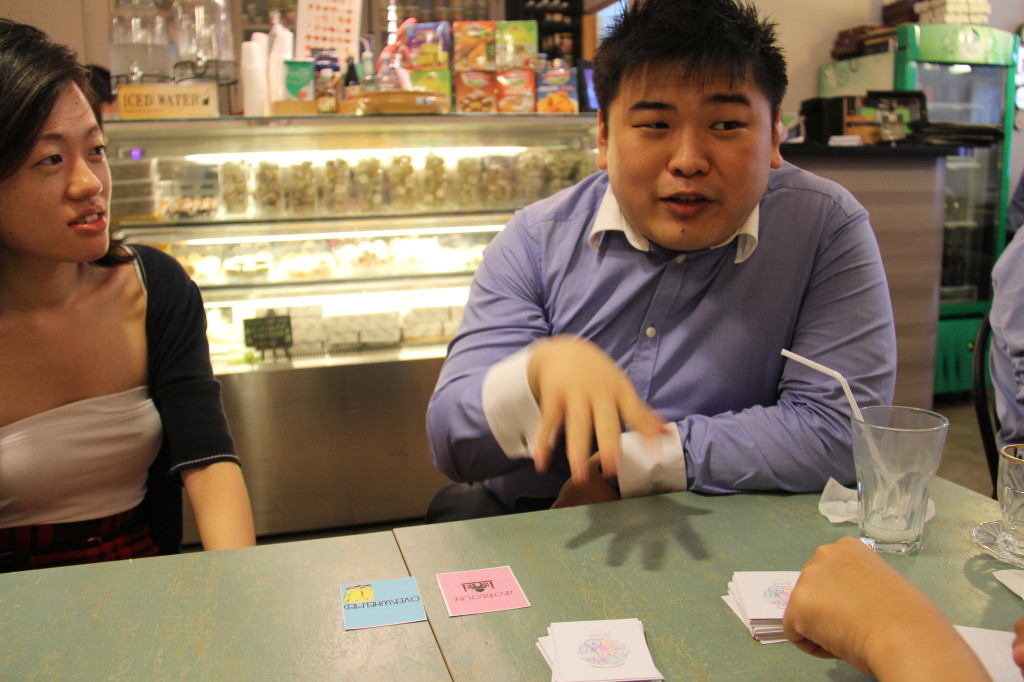 Urban Bites is located in the central business district along Telok Ayer Street. The nearest MRT Station is Tanjong Pagar. They are diagonally opposite mosque Masjid Al-Abrar. Parking is available opposite Amoy Street Food Centre or at the “The Clift”.