It has been a year since Singapore’s first Prime Minister passed away on 23 March 2015.

Famous for his vision and forward-thinking, Mr Lee Kuan Yew was an advocate of building a conducive global environment.

His role as Prime Minister often brought him away from the shores of Singapore to other countries. This gave him the opportunity to foster better relations with other leaders, and secure Singapore’s place in a fast-changing world.

Yesterday, in commemoration of Mr Lee, various remembrance events were held around the country. Thousands of Singaporeans set aside time to remember Mr Lee and his contributions towards transforming Singapore into the bustling metropolis she is today.

Due to Mr Lee’s emphasis on economic development, the ‘Singapore Model’ has since been widely emulated by many emerging countries, namely Rwanda, India and Brazil. 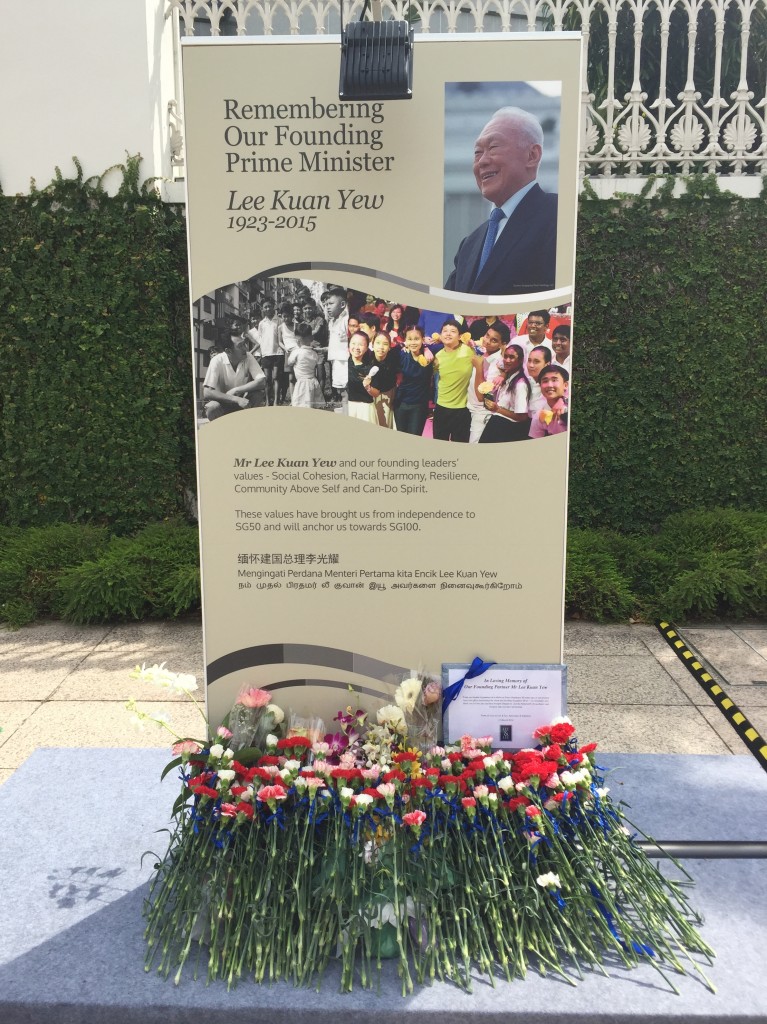 One year on: Some panels depicting the life of Mr Lee were thronged along the Singapore River. Many Singaporeans and foreigners alike left flowers as a form of tribute. (Photo: Woon Jiemin) 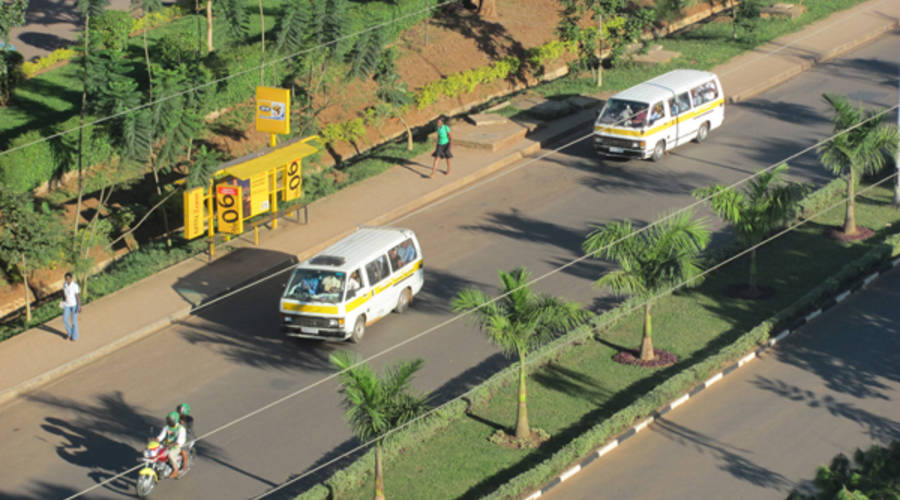 Clean and green: Kigali, the capital city of Rwanda’s streets are swept clean every morning, very much like how our streets are kept clean here in Singapore. (Photo: Lisa Desai)

Due to Singapore’s success, the model of governance Mr Lee espoused managed to extend beyond the borders of Singapore, reaching the shores of Rwanda.

Rwanda has similar characteristics to Singapore: a small, densely populated country, which lacks natural resources and has a racially diverse population. The country is predominantly made up of Hutus (85%), Tutsis (14%) and the Twa (1%) ethnicity.

It is therefore not surprising why Rwanda’s current President, Paul Kagame, decided to take a leaf out of Mr Lee’s book.

“We have been looking very attentively at the Singapore model,” said Shyaka Anastase, the Chief Executive of the Rwanda Governance Board, which promotes good governance for sustainable development in the country.

Although Rwanda is not a direct mirror of Singapore, some ideologies were certainly borrowed and implemented in the East African country.

One of the ideas emulated was the way Singapore attracts foreign investment. With great emphasis on the importance of political, social and economic stability, Mr Lee has worked to ensure these levers are in place to attract foreign investors. Similarly, Rwanda has been fighting corruption and is transparent with the use of aid money to improve stability.

Following Mr Lee’s vision of transforming Singapore into a ‘garden city’ in 1967, Kigali, the Rwandan capital, made similar changes such as having neatly manicured streets and flora.

Rwanda is one of the fastest growing economies in the world. According to the World Bank’s Global Economic Prospects, Rwanda’s Compounded Annual Growth Rate (CAGR) from 2014 to 2017 was projected at 7.12%. 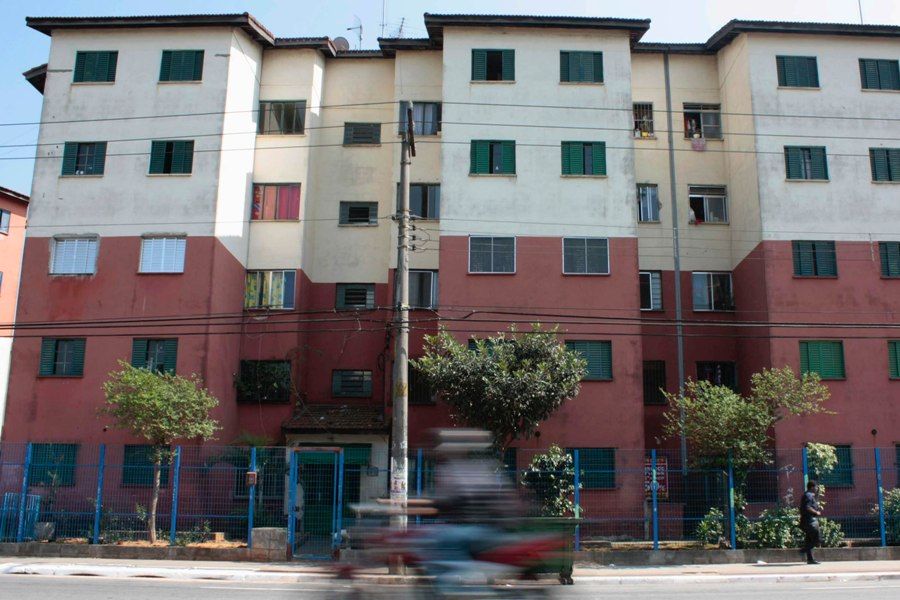 Building blocks: These flats in Sao Paulo, Brazil, were influenced by the HDBs here in Singapore. (Photo: http://noticias.band.uol.com.br)

Living in high-rise buildings is a common sight in Singapore. The Housing & Development Board flats or more affectionately, ‘HDB flats’, are affordable and internationally recognised for its quality.

It all started with Mr Lee, who had a vision to provide proper housing for the nation. The HDB flats were built to improve the living conditions of Singaporeans, who lived in unhygienic slums during the earlier years.

“The late Mr Lee Kuan Yew is the key driver of public housing in Singapore. His vision of a home-owning society has given Singapore a tangible stake in the nation,” said HDB CEO, Dr Cheong Koon Hean.

No one would have expected that 11,000 miles away, Sao Paulo, Brazil would adopt the same method to house their poor people. As the Latin Americans would say, mi casa, su casa!

In Sao Paulo, the poorer population lived in favelas, or shanty towns. The favelas are informal settlements made up of wood, cardboard and other makeshift materials.

Wanting to relocate them, the newly-elected mayor in 1992, Paulo Maluf, decided to implement the ‘Projecto Cingapura’, an urban renewal plan that was modeled after Singapore’s own HDB flats.

A total of 14,000 projected apartments were constructed in Sao Paulo, with residents moving in to occupy the buildings.

For Brazil to adopt the same public housing plans Mr Lee once had, it goes to show that his ideologies are feasible to be used in Singapore, and on an international stage.

On 23 March 2016, Lee Kuan Yew Jayaprakash celebrated his first birthday. The Indian baby boy born in the southern Tamil Nadu state of Mannargudi, was named after the late Mr Lee Kuan Yew by his father.

Mr Jayaprakash was moved by the flood of grief in southern Tamil Nadu state in the wake of Singapore’s founding Prime Minister’s passing, and decided to name his newborn son after Mr Lee.

In the Jayaprakash household, an image of Mr Lee was also included in their prayer room, alongside with images and statues of other Indian deities.

Another village in Tamil Nadu, Ullikkottai, has a poster stating ‘We honour the man who made Tamil one of the official languages of Singapore, and a man who made the dreams of Tamils around the world a reality’.

The affection India has for Mr Lee spreads beyond Tamil Nadu.

The Indian Government declared 29 March 2015 a day of national mourning for Mr Lee. The national flag of India was flown at half-mast throughout the country as a mark of respect. All official entertainment activities were suspended in light of the national mourning.

This tribute stems from Mr Lee, who is seen as the architect of the close ties between both Singapore and India.

“A far-sighted statesman and a lion among leaders, Mr Lee Kuan Yew’s life teaches valuable lessons to everyone,” Prime Minister Narendra Modi tweeted, when news of Mr Lee’s passing broke a year ago.

Evidently, there was no geographical limit to the extent of Mr Lee’s influence. His relentless pursuit of progress and determination spurred Singapore’s development, turning it into a case study for a few emerging countries. On the anniversary of Mr Lee’s passing, we remember his indomitable spirit and wise leadership. 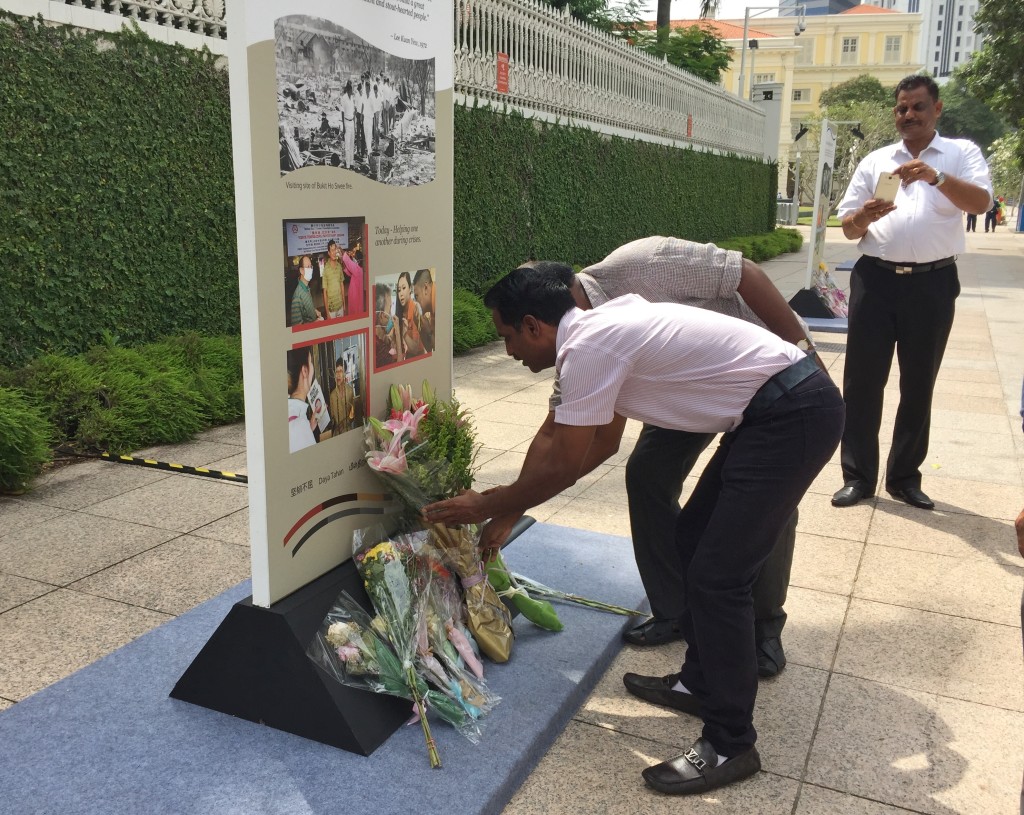 The thought that counts: Mr R. Karunanithi, 50, came all the way from Chennai, India to lay a bouquet of flowers on a panel portraying Mr Lee’s legacy. He then proceeded to pay his respects to Mr Lee. (Photo: Woon Jiemin)