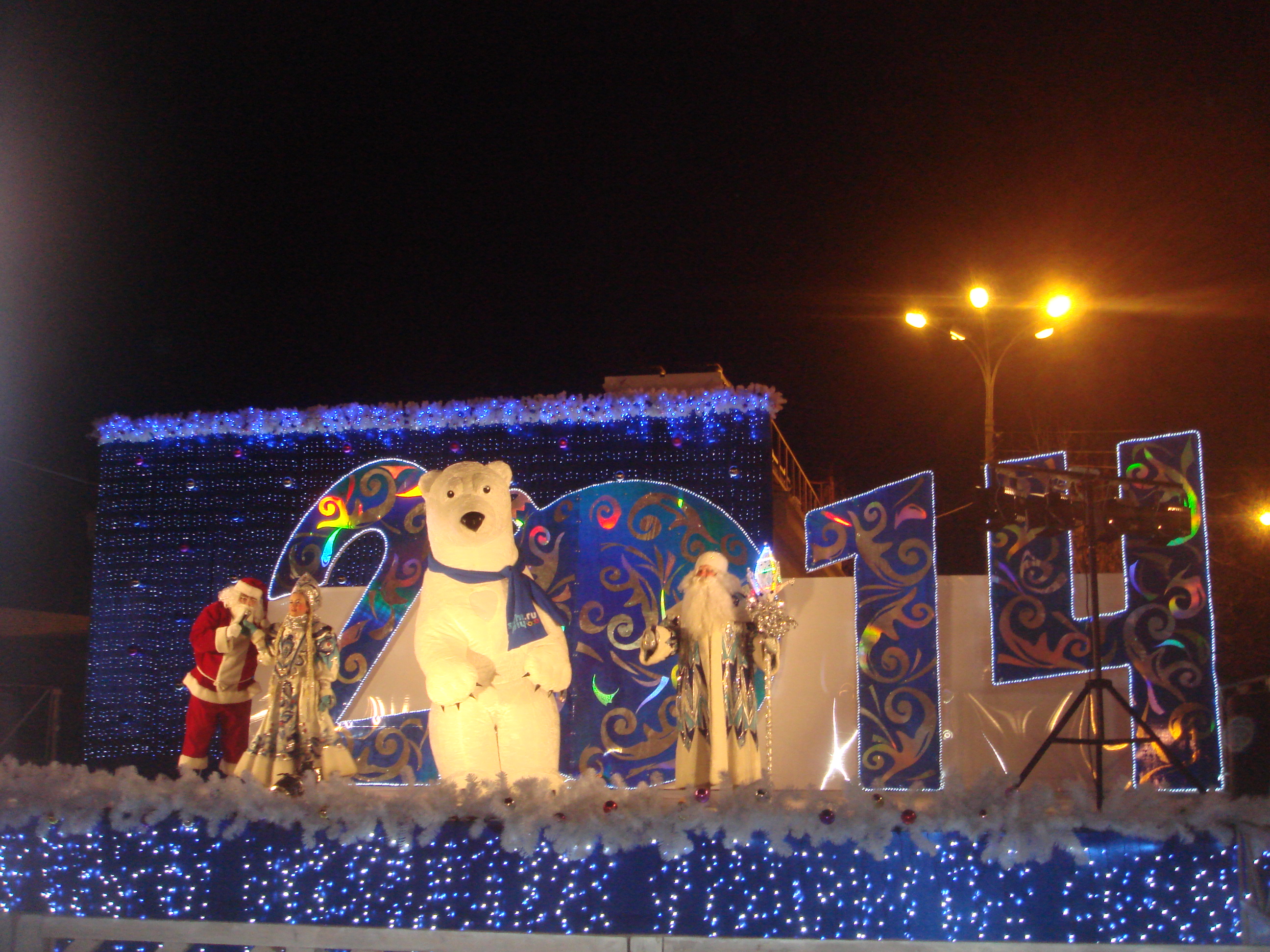 2014 Parade Float together with Father Frost

The reason why Christmas is celebrated on the 7th and New Year’s on the 14th of January is because we follow the Orthodox Church Calendar as well as the New Calendar. Thus, we celebrate Christmas (25th December) and New Year (1st January) as do the rest of the world too. So for us, we have two Christmas and New Year Day celebrations!

In Russia, our celebrations start from early December with theatrical performances, open concerts and best of all, skating rings at public spaces such as the Red Square and parks. 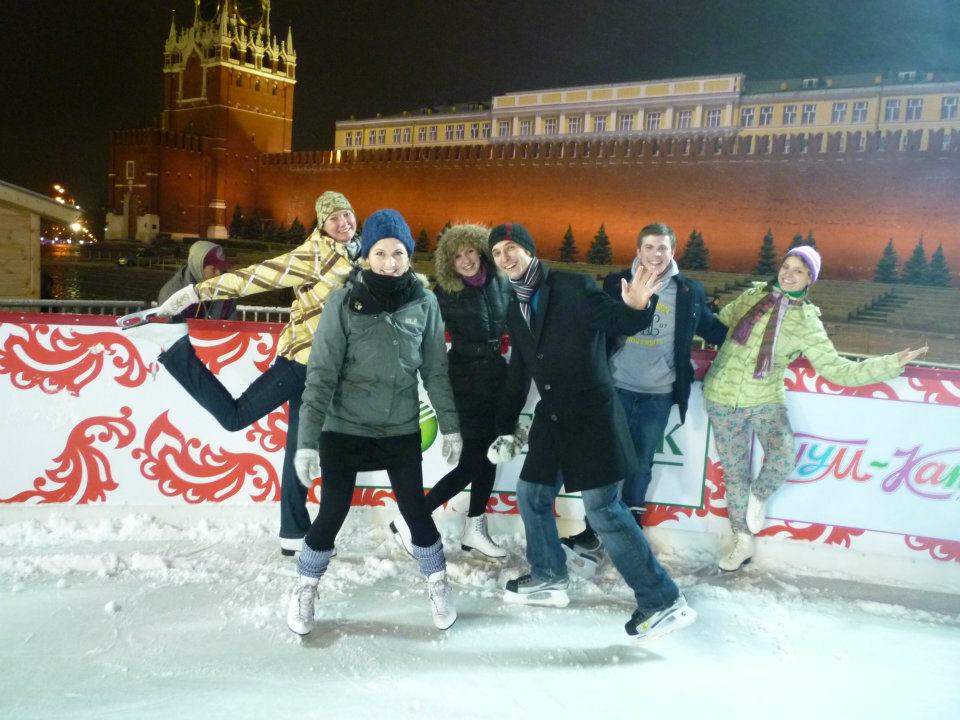 Skating at the famous Red Square

What makes this all the more delightful is that we have other activities as well, such as snow men exhibitions, dog sledge competitions and tubing. Moreover, a lot of pride is taken in maintaining a good Christmas tree which we will usually keep to the New Year (14th January). 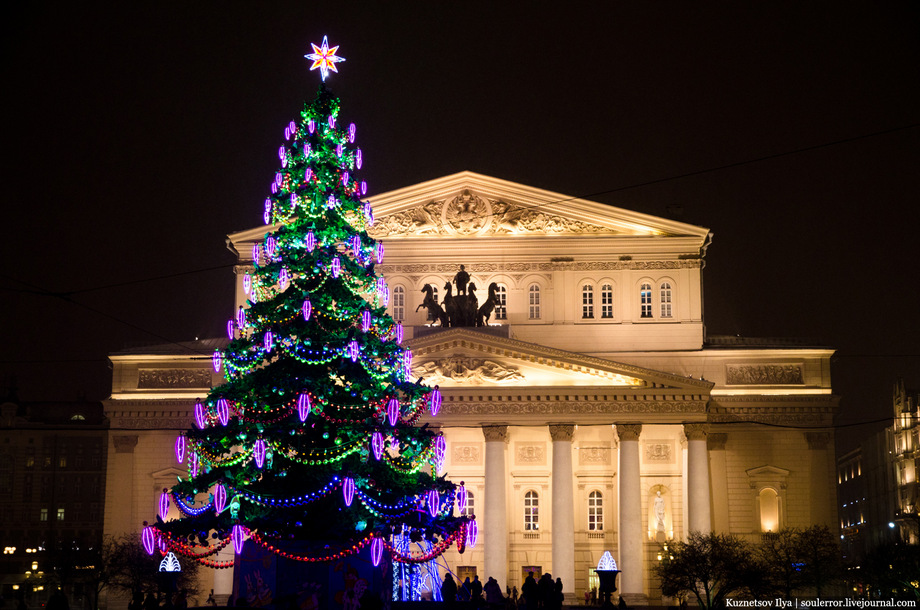 Christmas Tree outside the Bolshoj Theatre

And if you haven’t heard, Russia is hosting this year Sochi Winter Olympic Games too. 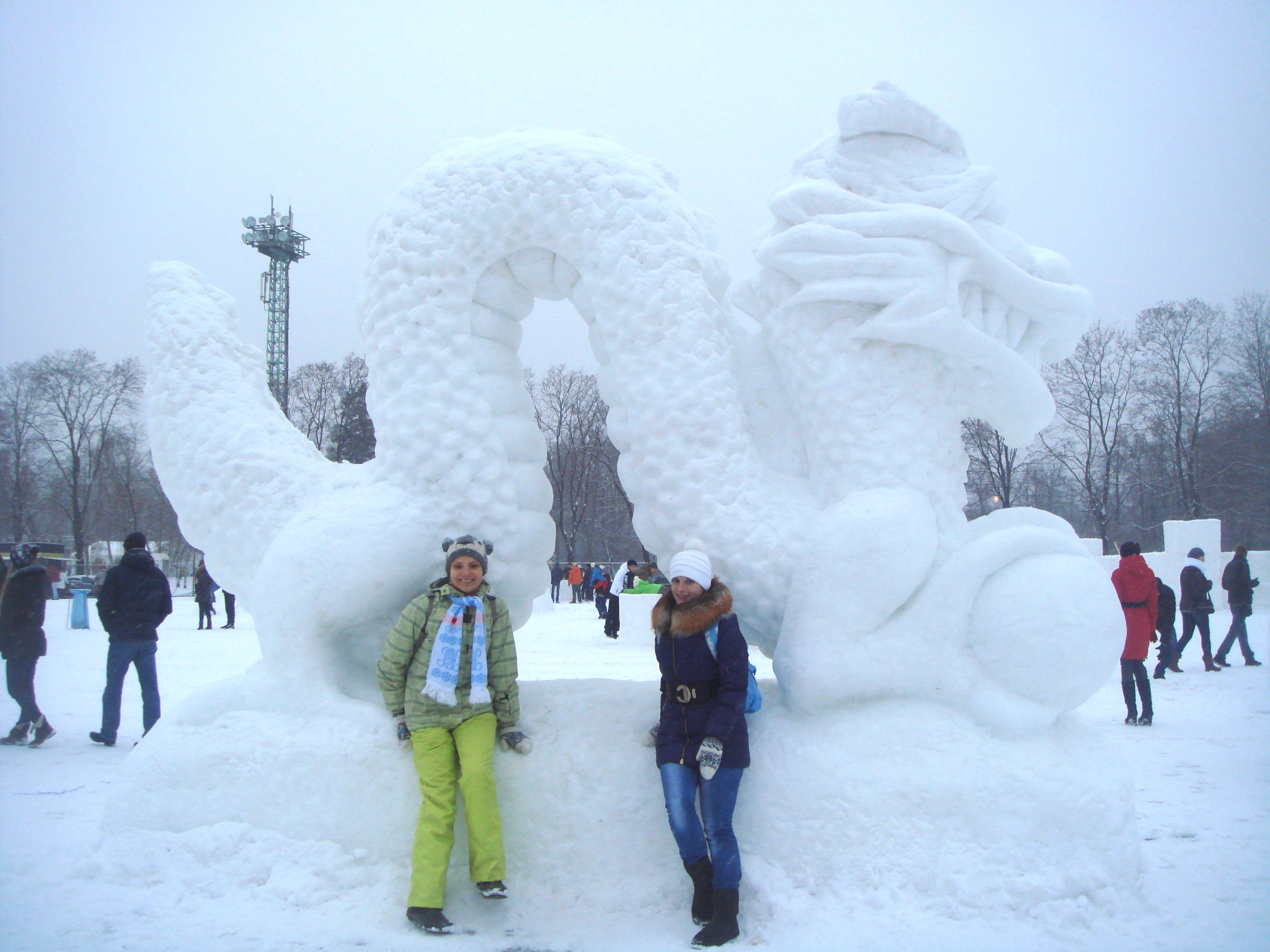 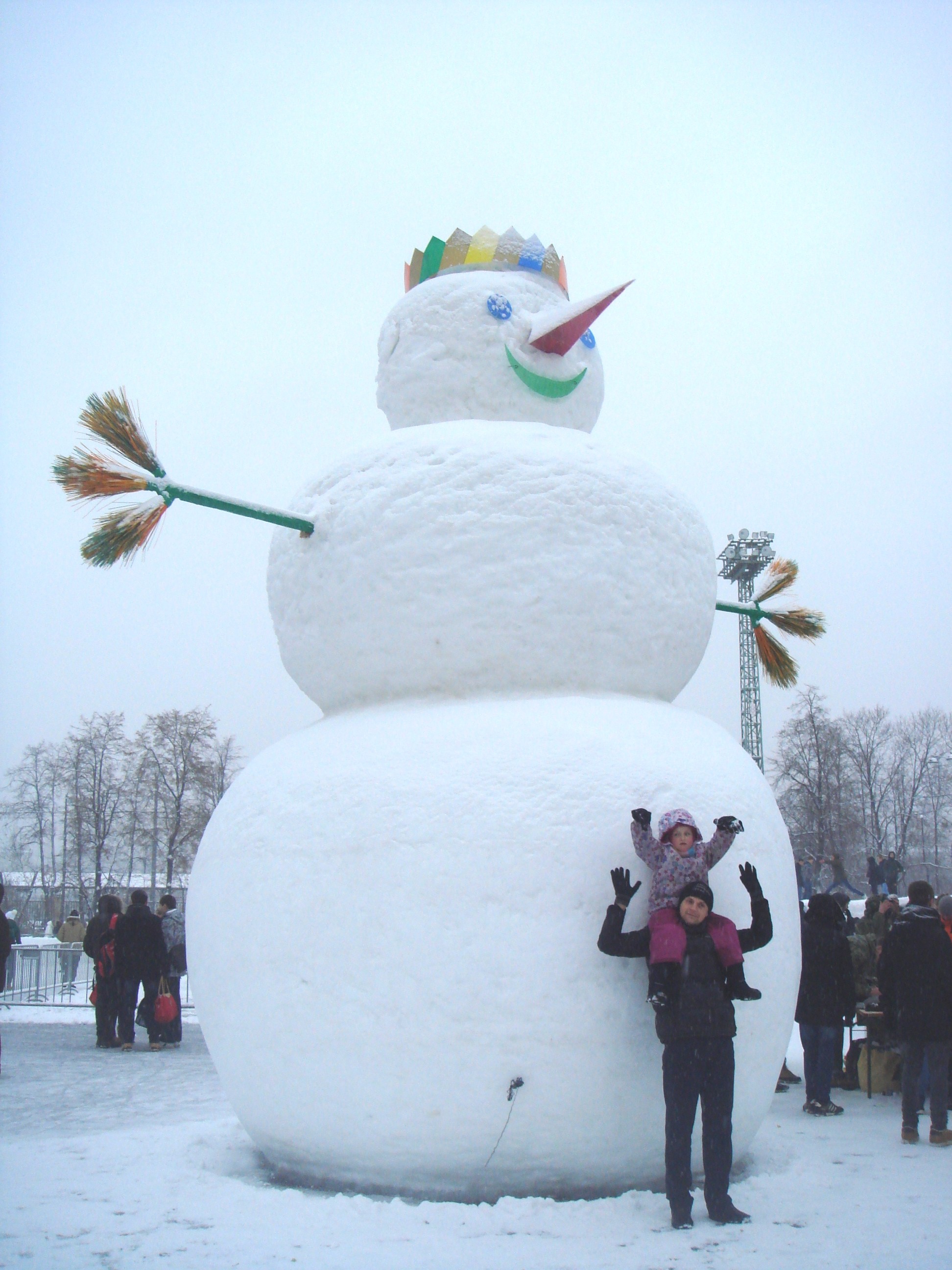 In recent times, there has been an increase in the number of Christmas markets around Moscow (a tradition that trickled down from our European neighbours). Nonetheless, our markets are slightly different, the markets are not just for shopping. There are elements of adventure in it too! For instance, the theme this year was ‘Journey to Christmas’ and we each get a book called My Christmas Passport and it maps all the Christmas markets and fairs in Moscow. The goal is to collect ‘stamps’ in this markets and complete the entire tour.

Moreover in these Christmas markets, you can send postcards or letters to your loved ones through the special Street Christmas Boxes. 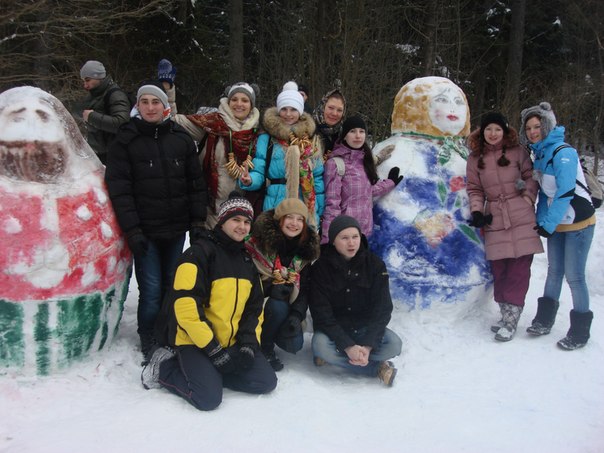 When in Russia, you can’t miss the palace of Father Frost. He is the Russian version of ‘Santa Claus’ and the differences between him and Santa Claus is that Father Frost is always seen holding a magical staff and instead of giving gifts in secret (like Santa), Father frost gives them in person. 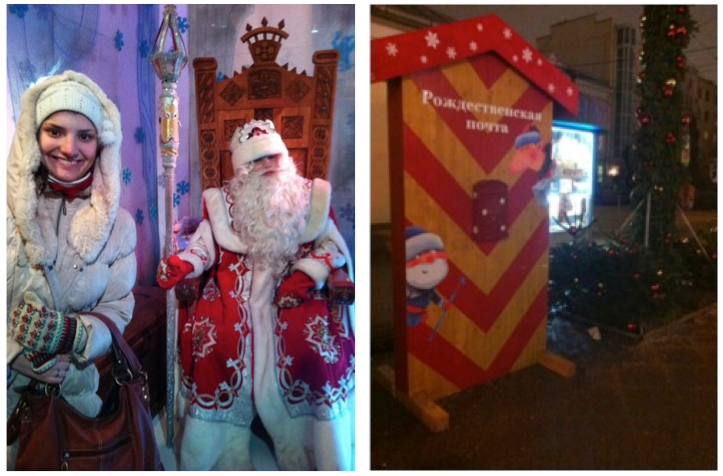 On Christmas (7th January), families gather to have a traditional Christmas meal together which includes Holodets, a meat jelly and Olivie, a traditional russian salad that uses cabbage, chicken, potatoes and fused together with mayonnaise. More importantly, on this day, we attend church together with our family members and loved ones.

Christmas Party at home with the family

Another variation of Christmas is Russia is that on the 19th January, we celebrate the Baptism of Jesus. We believe that on this day, Jesus emerged from the water on his way to heaven. Thus to us, the water on this very day becomes holy and is imbued with special powers.

So what do we do? We swim in freezing cold ice ponds to get ‘blessed’ of course! 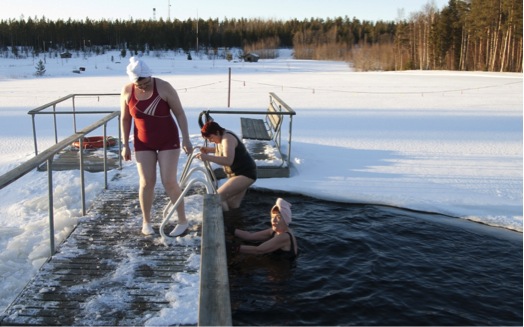 Getting out of the freezing waters

New Year (1st January) is spent with our families at home. Nonetheless, there are others who spend the holiday with their friends or family at the Red Square, country houses or Russian Saunas (called banias).

For us, we prefer to celebrate New Years with our families. What we do is that together, we reflect back on the year and toast to all the moments that we had (2013). The house is decorated and a delicious spread is being put on the table. We catch the president speech on TV and at the stroke of midnight, we will have a champagne toast and make a wish.

There is a tradition that if you really want a wish to come true in the year ahead, you should write your wish down on a piece of paper, burn it and place the ashes into a glass of champagne and drink up. If this is not your cup of tea, you can just make a wish in secret but you have to do within 12 seconds from the stroke of midnight. 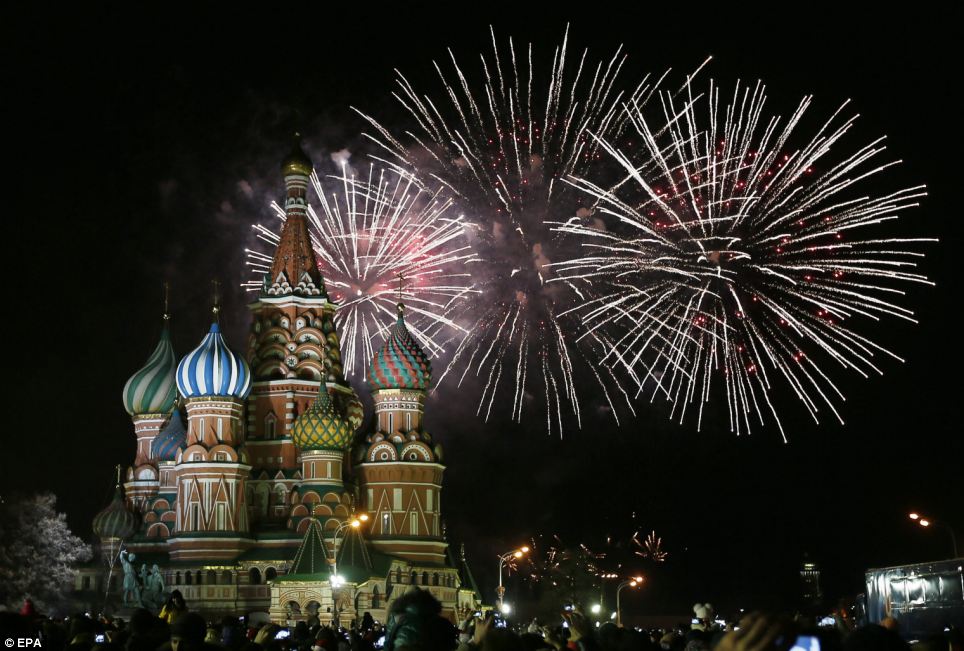 What makes it all the fun is that this will be repeated on the 14th January again! But this time, it’s generally quieter as compared to the celebrations on the 1st. We have a family feast but on a smaller scale and spend the time singing and enjoying drinks with one another.