Muslims all around the world face the direction of the Kaaba when performing their prayers. A square building draped in silk and cotton veil, the Kaaba is housed at the Masjid Al-Haram in Mecca, and considered to be the holiest shrine in Islam.

Many pilgrims are said to shed tears and sink to their knees as they laid eyes on the sacred shrine for the first time, yet for 27-year-old Badron Adnan, it was quite the opposite.

It was like ‘a smack on the face for me,’ the third-year Nanyang Technological University (NTU) student said when he first set sight on the Kaaba. “It made me feel remorseful and want to repent for my sins. It was like God’s way of saying ‘wake up’.”

Badron visited the Masjid Al-Haram in Saudi Arabia on December 2015 to perform the Umrah pilgrimage. Together with his parents and aunt, they were among some of the 15 million pilgrims worldwide who visit Mecca annually, to either perform the Hajj or the Umrah as a token of their faith.

For many Muslims, it is believed that one of the most meaningful aspects of the pilgrimage is the unifying affect of bringing believers from all over the world to worship together.

Great Mosque of Mecca: The Masjid Al-Haram is the largest mosque in the world, and oversees one of the largest annual gathering of people during the Hajj pilgrimage. (Photo: Badron Adnan)

The Hajj and the Umrah

Part of a Muslim religious class, Badron and family made the ‘spontaneous decision’ to jump on-board the bandwagon when they heard about their religious group’s plans to depart for Umrah.

Even though both the Hajj and Umrah are both pilgrimages, there is a stark difference between the two.

The Umrah is known as the lesser-hajj or minor pilgrimage, and can be done any time of the year. The Hajj on the other hand, can only be performed at a specific time of the year, namely the Dhul-Hijjah or the last month of the Islamic calendar. The Hajj usually occurs between September and October anually.

The Umrah also differs in terms of the timing and rituals. The Hajj usually takes about five to six days to complete the full pilgrimage, where the Umrah only requires a few hours at most.

Leading up to the departure for Umrah, Badron had to attend six classes lasting about three hours each. These classes taught him on what to prepare for during the pilgrimage, such as the different rituals to expect and what kind of prayers to recite.

Another tip that Badron was taught to prepare for, is the attire he had to don for Umrah. For the men, they would have to wrap two pieces of white cloth without any stitching around their bodies. For women, they can opt to wear any ordinary clothing, as long as it covers them up.

The significance of the attire not only shows the holiness of the pilgrimage, but also instills a sense of equality and unity in the pilgrims by removing all visual indicators of class, wealth and culture. 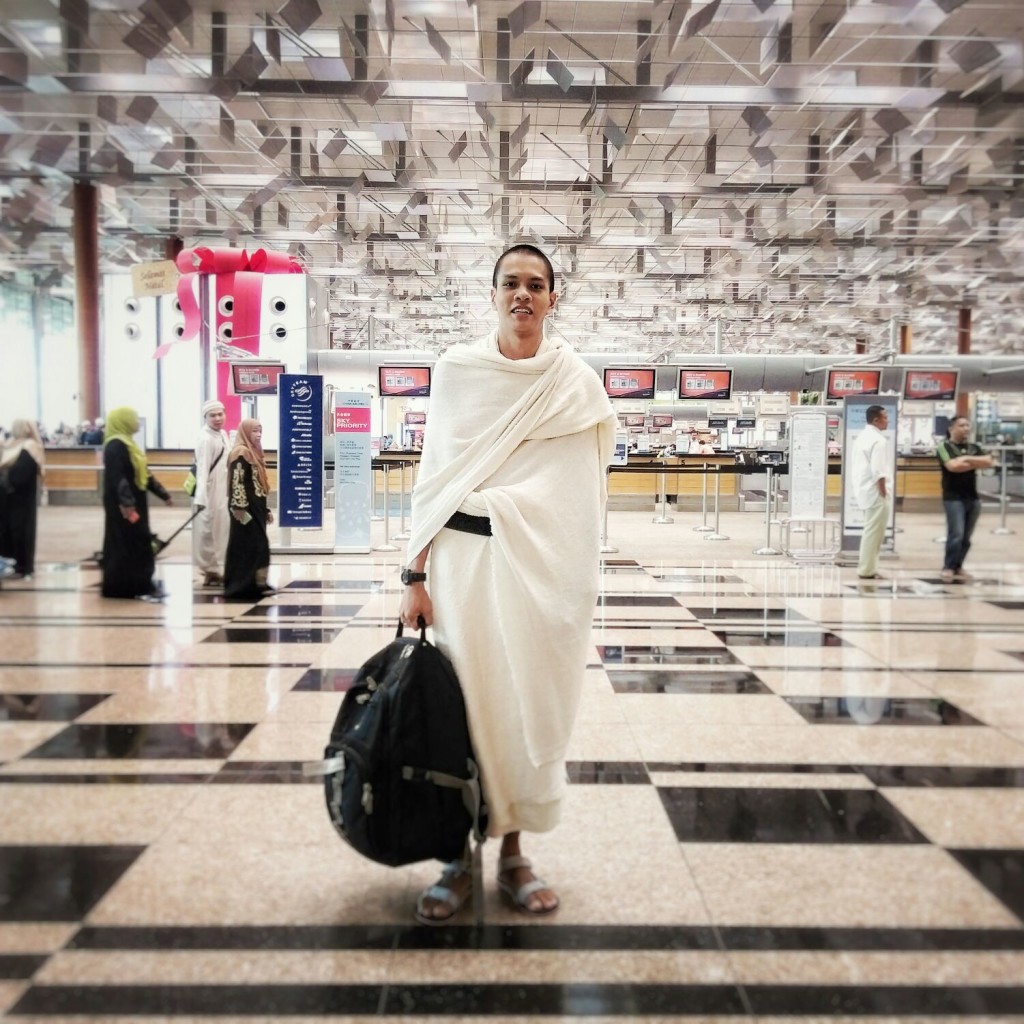 Ihram clothing: The objective of the white Ihram clothing is to make everyone appear the same. It is believed that there is no difference between a prince and pauper when everyone is dressed equally. (Photo: Badron Adnan)

During the period that Badron performed his Umrah, he felt that the crowd was relatively ‘comfortable’, as it wasn’t during the Hajj pilgrimage or peak periods. Badron also mentioned that the Masjid Al-Aaram had an upgrade, following the stampede that happened on 24th September 2015 where 769 lives were lost. It was reported that the Saudi Arabian government had later pumped in SGD $81.47 billion, expanding the masjid and improving safety procedures to cater to a larger crowd.

The series of rituals carried out during the Umrah are symbolic of the lives of Islamic Prophet Ibrahim and his second wife Hajar. Many Muslims recognize Ibrahim as a prophet in Islam and patriarch of many.

Firstly, the rites of Umrah require pilgrims to enter the state of Ihram. The state of Ihram is believed to be the ‘state of spiritual purity’ all pilgrims must achieve before the start of Umrah. At this stage, certain acts like cutting nails, using perfume or engaging in sexual activities are prohibited.

The second step of the Umrah ritual is when pilgrims perform the Tawaaf of the Kaaba, in which they walk around the Kaaba seven times in an anticlockwise direction. The circling of the Kaaba represents the idea of oneness, where the pilgrims move harmoniously around the Kaaba to demonstrate the worship of one God.

“My entire life in Singapore, I have been facing in the direction of the Kaaba, but there and then I was right beside it (the Kaaba). It was especially overwhelming when despite the crowd, I was able to do my prayers just a few meters away from the Kaaba,” Badron recalls, when asked about how he felt when performing the Tawaaf.

Being an only child and having fostered a very close relationship with his parents, Badron found the Tawaaf ritual to be his most memorable experience so far. “My mom has been sick for many years, so it was a beautiful moment when I realized my mom had the strength to be there, doing the ritual with me as a family,” he said. 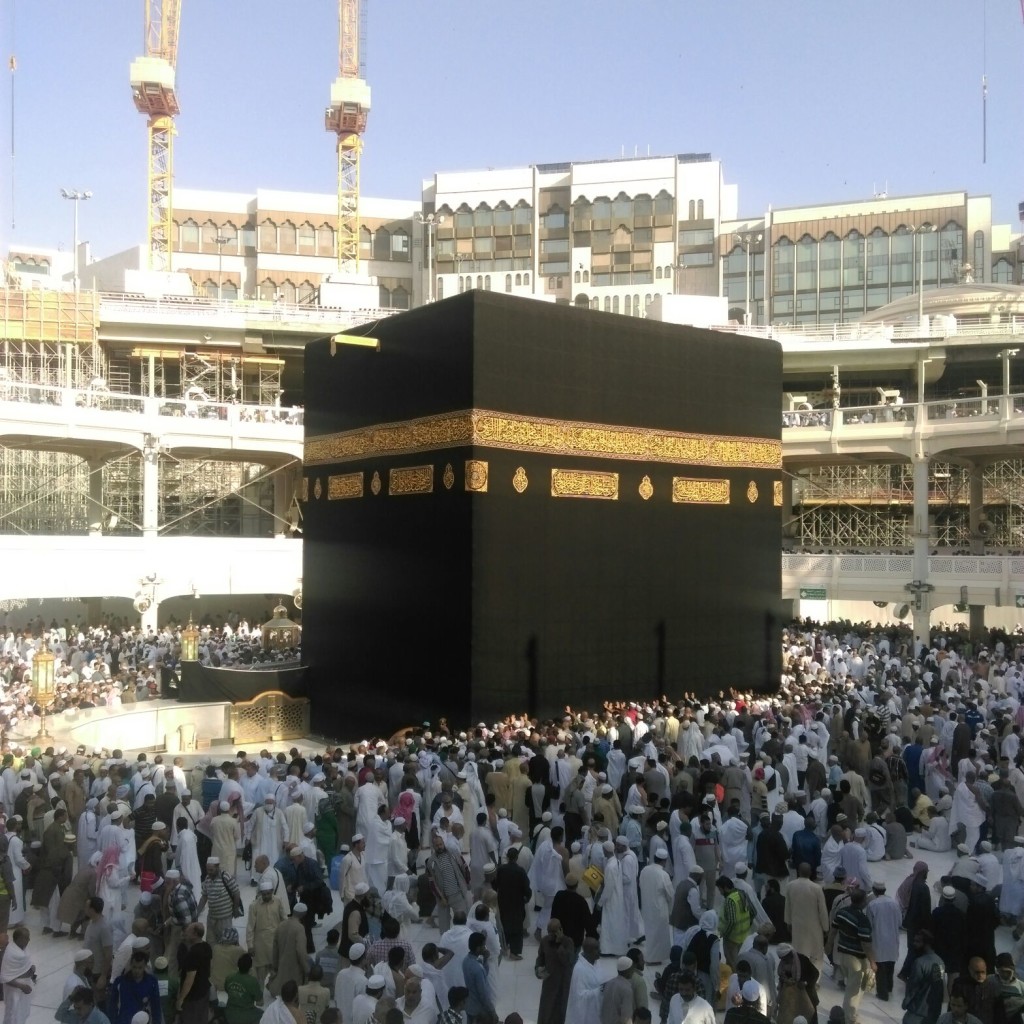 The Kaaba: From any point in the world, the direction facing the Kaaba is called the qibla. (Photo: Badron Adnan)

For the third step, called the Say’ee, pilgrims will have to rapidly walk between the two hills of Safa and Marwah seven times. It is believed that Ibrahim’s wife, Hagar, did the same when looking for water for her baby Ishmael. As soon as she finished her seventh run, the Zamzam well sprung up from under baby Ishmael’s foot. Till this day, pilgrims either performing the Hajj or Umrah will still drink the water from the Zamzam well.

Lastly, to complete the Umrah, pilgrims can choose to either clip their hair or shave their heads. The clipping or shaving of hair is meant to signify the end of the state of Ihraam. Badron and his father opted for the latter, as they felt that shaving their heads brings more blessings. Badron did it himself using razorblades, just like the pilgrims in the old days when appliances such as the electrical razor haven’t been invented.

Halfway through his shaving process, Badron recounts his razor going blunt. “With my half-shaved head, I actually had to go out of my hotel room to buy more razors,” said Badron, laughing. He went through three shavers to completely shave his head, but that signified the end of Badron’s first Umrah ritual.

Following his first experience, Badron already has plans to perform the Umrah again this December.

When asked about his reasons for doing so, Badron replied: “There (at Masjid Al-Haram), you are free from distraction and life is much simpler. It was simply eat, sleep, pray and spending time with family. Once you have been there, there will always be a longing to return.”