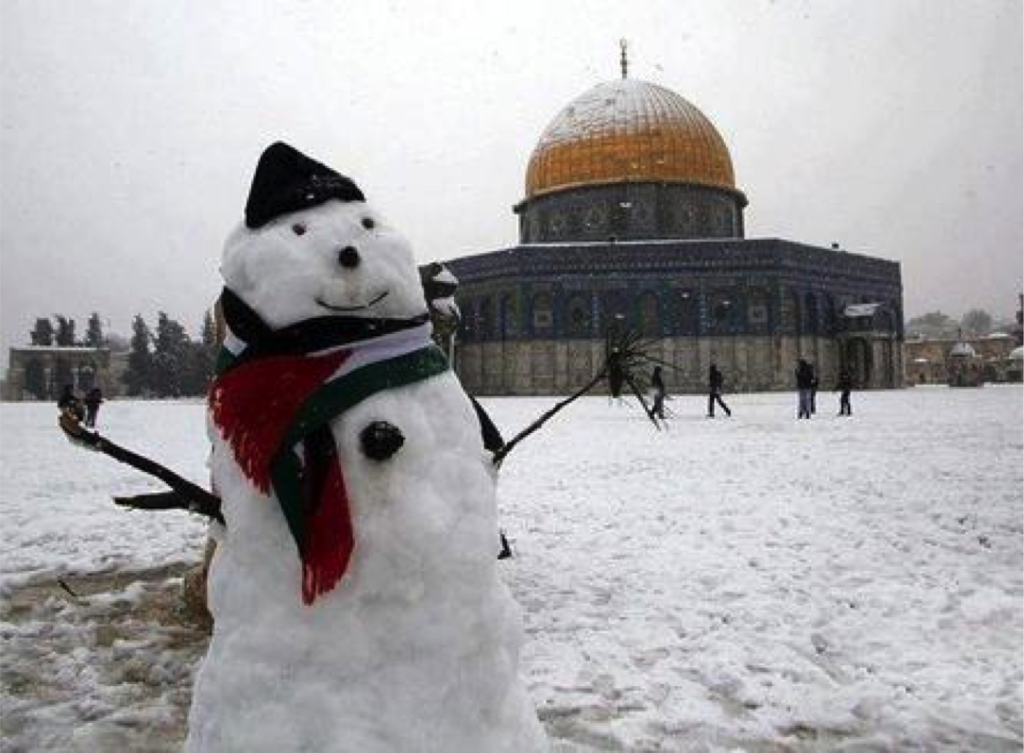 Students are always amazed when I show them this photo of a snowman with a Palestinian flag-scarf in front of the Dome of the Rock in Jerusalem. Yes, it snows in parts of the Middle East too!

Whenever I have given lectures on the Middle East in Singapore schools in the past three years, I always begin with the question: “What images come to your mind when I say the words ‘Middle East’?”

“Where do you think we get these images from?” I ask them. They would reply: ‘TV’, ‘news’, ‘internet’. I then display a screenshot of Google search results for images under the term ‘Middle East’, which shows (you guessed it) deserts, camels, veiled women.

Ignorance of this part of the world manifests not just among our teenagers, but also among the older generation. It parallels that of the average American and European living in regions of the world that our “interconnected” economy and cultural outlook are aligned with, regions from which our literary, sartorial, and commercial tastes have been imported.

No doubt, there are pragmatic reasons why we transformed into an Anglophone society, and there are logical consequences of these policy decisions. After passing through an education system in which we are more likely to study Shakespeare rather than the Persian poet Hafez, we have inadvertently been imparted with an understanding of the world that is viewed from the British Isles and an ideology of the current world order that is viewed from the North American continent, with their associated prejudices and blind spots.

The long-time emphasis on learning about China, and more recently, India, at the school level balances somewhat this bias. However, I would argue that it is only in the region we call the Middle East that one can see, most lucidly, the nature of the US imperial order we live in today.

This is because it is in this arena – not North Korea, not the South China Sea – where the world superpower exhausts most of its energy, money, and attention. Apart from funding its wars in Iraq, Afghanistan and Yemen, the US also allocates approximately one-third of its foreign-aid budget to Israel, which, with a population of 8 million, is the largest cumulative recipient of US aid since World War II, receiving an average of US$3 billion in aid annually.

Many in Singapore would have heard of Israel; fewer, though, understand that Palestine is under a brutal Israeli military occupation and what that entails. In Osama bin Laden’s letter to the US, the first reason he gives for why “we” are attacking “you” is Palestine. There is a logic to this madness; and there is certainly a history to this ideology that is rooted not in religion but in real-world events.  Indeed, resistance has taken many forms (secular, communist etc.) over many decades before it took on its religious garb of “radical Islam”.

Experts are still grappling with the ideological transformation from Al Qaeda to the Islamic State. But until they figure that out, we have to get up to speed with this other side of history, the story of those who could not, and did not, become allies of the “West”, the tragedy of those who are still fighting the anti-colonial wars that many of the rest of us left behind in the 20th Century.

If we want to better understand the terror attacks in Paris on Nov 13, we have to learn this history that our allies may consider inconvenient, because if and when such a crisis hits Singapore, we need to understand that the enemy is not Islam.

This matter is particularly pressing because Anglophone media coverage can obfuscate more than it clarifies, perpetuating a common misconception of the region as one that is too complicated and confusing to truly understand. Indeed, the Middle East is as contested in its media-scape as it is in its physical landscape.

As such, a strategically-designed curriculum on the region introduced in our schools may equip the younger generations with the necessary knowledge to navigate the deluge of partisan news coverage on the region. This may also help rebalance the current asymmetry of knowledge between Muslims and non-Muslims, as I’ve observed in my years of Arabic lessons here (more often than not as the only non-Muslim person in class), and in my lectures at more than 10 schools over the past three years.

From my observations, non-Muslim Singaporeans tend to reflect prejudices towards the region that pervade Anglophone media, the most common among which are the misrepresentation of conflicts in the region as being fundamentally religious or ethnic in nature, and the idea that Islam is a major reason for the region’s antagonism with the US. This is a worrying trend, especially if these subconscious prejudices become displaced onto our own Muslim community.

To recapitulate, I have given two arguments for a basic curriculum on the Middle East to be introduced at schools. First, learning about the Middle East is crucial to understanding the US-dominated world order we live in today, as it is in this arena where the US is deeply mired in and whose conflicts are overflowing into our realities and onto the streets of cities we identify with. (The brutal fact of the matter is that bombings in Beirut and Baghdad do not shock Singaporeans as did Paris.

Second, the asymmetry of knowledge between Muslims and non-Muslims domestically threatens to divide society in times of crisis, especially since the fault line runs along ethnic lines. At the St. Gallen symposium this year, DPM Tharman Shanmugaratnam talked about how Singapore puts a premium on her social and housing policies to prevent ethnic ghettos. My question now is: Should we not do the same for our intellectual ghettos? For it will take much time and (re-)education for this truism to sink in: that there is nothing intrinsic in any culture or any people that makes them inherently predisposed towards sabotage or bloodshed; there are always mundane political and economic reasons.

For those interested to find out more about the Middle East, please visit this website: fromsueztosingapore.wordpress.com. It is a non-profit website created by the writer aimed at Singaporeans.