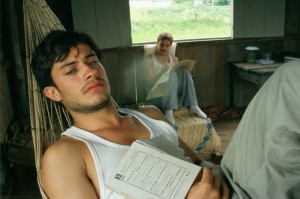 You can watch the full movie here (in Spanish)

For over 20 years, introverted hardware store owner Roberto has lived virtually shut off from the outside. After a chance encounter with Jun, a Chinese man who has arrived in Argentina looking for his only living relative, Roberto takes him in. Their unusual cohabitation helps Roberto bring an end to his loneliness, but not without revealing to the impassive Jun that destiny’s intersections are many and they can even divulge the film’s surreal opening sequence: a brindled cow falling from the sky.

You can watch the full movie here (in Spanish)

The film depicts Violeta del Carmen Parra Sandoval’s road to becoming considered one of Chile’s greatest folklorists and artists. It chronicles her guitar playing at a very young age, the ambience of her musician father’s haunts, and the rural settings of southern Chile in the Ñuble Province.

The Motorcycle Diaries (is a 2004 biopic about the journey and written memoir of the 23-year-old Ernesto Guevara, who would several years later become internationally known as the iconic Marxist guerrilla commander and revolutionary Che Guevara.

The film recounts the 1952 expedition, initially by motorcycle, across South America by Guevara and his friend Alberto Granado. As the adventure, initially centered around youthful hedonism, unfolds, Guevara discovers himself transformed by his observations on the life of the impoverished indigenous peasantry.

Through the characters they encounter on their continental trek, Guevara and Granado witness firsthand the injustices that the destitute face and are exposed to people and social classes they would have never encountered otherwise.

To their surprise, the road presents to them both a genuine and captivating picture of Latin American identity. As a result, the trip also plants the initial seed of cognitive dissonance and radicalization within Guevara, who ostensibly would later view armed revolution as a way to challenge the continent’s endemic economic inequalities.

Scary and realistic portrayal of the destiny of two Brazilian boys. One becomes a photographer, the other the lord of a drug ring and a violent neighborhood where they both grew up. Nominated for four Oscars, this movie put Brazil again in the map of cinema, and launched the career of Fernando Meirelles, who later would direct “The Constant Gardener”
Watch the movie here (with English subtitles)