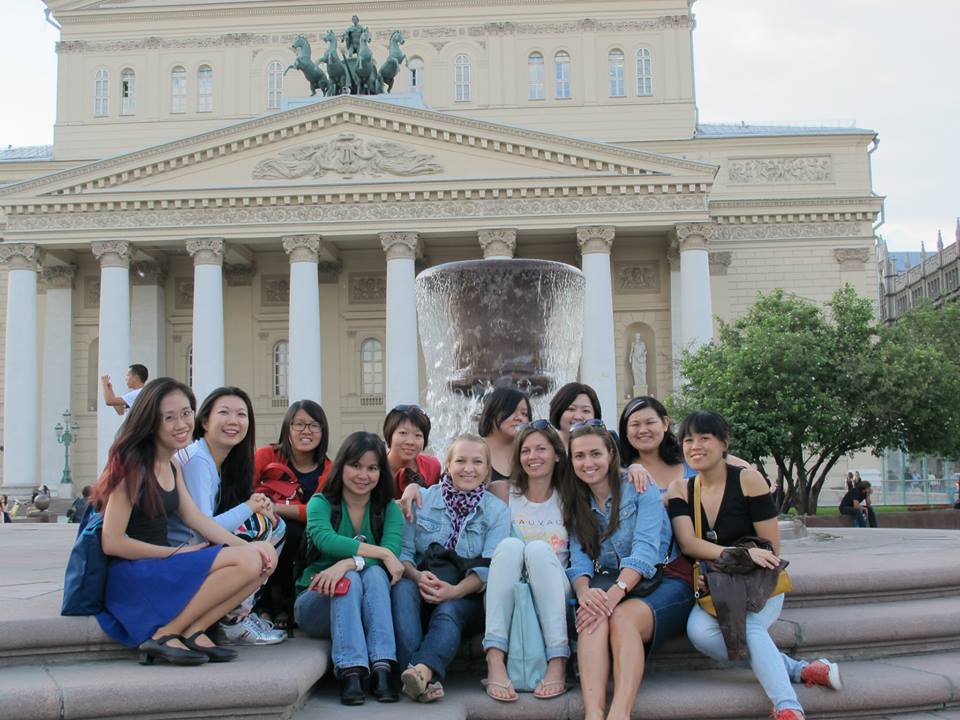 Katya used to work for a language centre in Russia but came over to Singapore six and a half years ago with her husband, who is running a business in Singapore. In Singapore, Katya first started out as a Russian language teacher with a local language school. However, due to low interest in the language at that time, she had only 1 student a month. As interest in the language increased, she started her own language school, which has recently shifted to Boat Quay from its previous venue near Alexander Road.

What is your impression of Singaporeans?

Seventy to eighty percent of my students are Singaporeans. I think they are very shy. I am younger than most of my students and my school is not like universities or other schools in that my lessons are not conducted very formally. For example, we can have beer in class and we chat about our lives. Even so, my students still treat this like a school and they still maintain this huge distance between themselves and the teachers. I mean, there must be a certain level of respect. But they are overdoing it. During the lesson, we usually talk about our daily lives. Sometimes I ask the question, “What did you do yesterday?” and many people will just reply with “Nothing”. Actually, I am not really interested in what they did. I am just asking the question in Russian so that they have a chance to practice the Russian language. Why do they pay for the course and come to the lesson to say only one word in Russian? They are wasting their money

. This is different from Russians. When Russians have paid for the course, they will make sure they gain something from their teacher. I think it’s not just about learning the language; Singaporeans seem to treat life like that and I cannot imagine how they communicate with other people.

What are the differences between both countries’ education systems?

In Russia, the teachers are not paid well because teaching is a government job. As a result, the quality of education is not good. Also, Russian education is not recognised anywhere and Russian certificates are not recognized in most parts of the world apart from medicine.

We had a free education system last time but now it is not. I was from the old USSR education system and I felt it was very good. Till we are 15 years old, we do not focus on exams. We have exams every year but we are not stressed, unlike Singaporeans. When I mention the word “tests” accidentally in my language classes, my students start shaking. People are generally more relaxed in Russia when it comes to education. School was just a place to meet friends for me although I still studied. When I hear about the Singapore education system from my students, it really freaks me out. From young, you (Singaporeans) are trained to be so focused and competitive. Take for example the competitive streaming system in Singapore. And because of this, adults do not want to have children because they think they cannot support and afford to have kids. Nobody thinks like that in Russia.

Does that mean that Russians generally want to have children?

Yes. If they do not want to have children, it is usually because they are poor. People in Singapore claim they cannot afford to have children but they live in condos and travel once or twice a year.

I think it is easy to have kids in Singapore. Here, you can go anywhere with kids because of good facilities everywhere. For example, shopping malls have toilets and baby nursing rooms. In Russia, if you have a kid, you are stuck at home. We do not have such facilities. If you do not have a car, you are also stuck at home. Travelling with children in the metro system in Russia is unimaginable. There are no toilets in metro stations as well. The whole city in Moscow seems to be built with the preconception that there are no handicapped people in society. There are no facilities that are friendly to children’s prams or luggage with wheels; you have to climb stairs everywhere.

I heard Singaporeans are encouraged by your parents and society to go into certain industries in Singapore. I would like the Russian government to pay attention and develop certain industries and prepare specialists for these industries. This is not happening in Russia now. In Russia, everyone decides who we want to be. Some choose to pursue their passion in arts etc. You do not know whether you have a job until you graduate and some end up with no jobs. After the Soviet Union collapsed, we had this trend where everyone wanted to be lawyers because they were highly paid. However, that is because of the market and not because the Russian government said so. What I like in Singapore is that the government is very focused, such as in medicine and high technology sectors. However, the flip side is that there are  fewer artists and language specialists.

What do you think can be improved in Singapore?

I noticed that people could not speak Chinese after the government’s push for speaking proper English. It was shocking to me when my student could not communicate with her grandmother during a family dinner although it is just a one-generation gap. I do not understand how we can end up not being able to speak our mother tongue. There is the whole cultural background behind your mother tongue. This is something missing in Singapore. When I ask Singaporeans where they are from, usually people are stumped and are not able to identify themselves. This is something that I have not seen before, because in Russia, we have a long history and culture.

Is it tough to set up a business in Russia?

The procedures are clearer in Singapore and you can just register online. In Russia, I was trying to figure out how to register online but I couldn’t understand the website even though I am a native speaker! There were also no links or other descriptions. In Singapore, it is also easy to pay taxes and set up businesses; everything is easy. In Russia, you try to be honest and try to do things the right way but there is always this law that you have not heard of that can land you in jail. People want to make everything more complicated, creating more paperwork so that more people can be engaged in jobs.