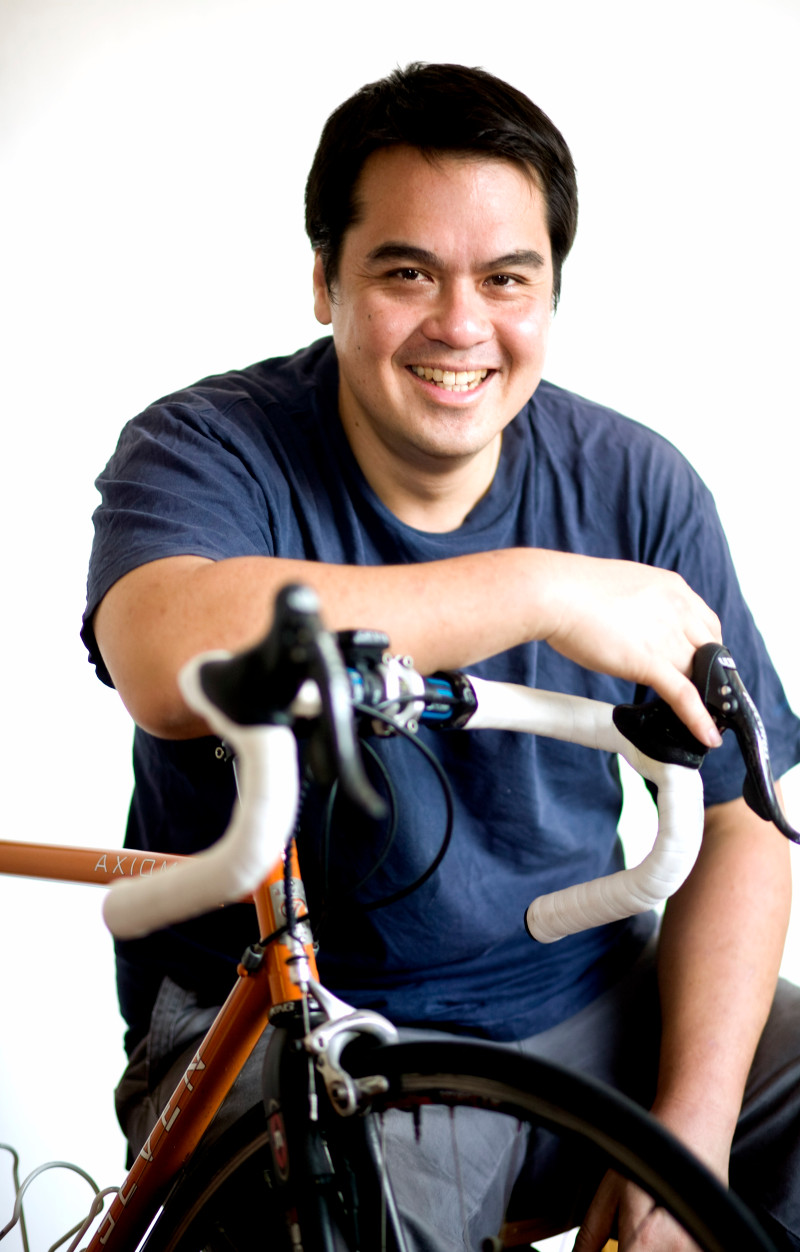 If commercial photographer was not the first thing that came to my mind the first time I met Nicholas Leong, founder of a Kenyan cycling team was probably the very last. Nicholas Leong, a photographer-turned-entrepreneur, and his team of Kenyan cyclists have been making waves all over the cycling community in recent years. They have been featured in The Straits Times, SGEntrepreneurs, The Guardian, and The New York Times. Next year, his team will compete with top cyclists in France. Nicholas believes that in time to come, his team of cyclists will be the best in the world.

Tell us more about the Kenyan Riders.

I set up the Kenyan Riders in 2009 together with Matthieu Vermersch and his wife from France. Matthieu used to be a hedge fund manager

based in Singapore. The Kenyan Riders are a professional cycling team based in the city of Iten in Kenya. We currently have 26 members on board – 16 cyclists, 3 full-time coaches, a directeur sportif (French for sporting director), managers

, cooks, masseurs, and a mechanic.

How did the Kenyan Riders begin?

I have been a fan of cycling since I was a kid. Growing up, I saw Kenyans winning marathons everywhere. They dominated running, so I kind of expected them to turn up in cycling as well, but they did not. In my late

thirties, I had this idea that if Kenyans were winning marathons everywhere, they ought to be good if you gave them bikes. So, I wrote to the people in the cycling scene and told them that they should go to East Africa. They rejected my idea. At some point in time, I thought that if nobody was going to do it, maybe I could. So I waited for the Singapore Marathon and followed the winner home (he was a Kenyan). When I reached Kenya, everybody was like him. Everybody could run a marathon. There is this mountain in France called the L’Alpe d’Huez. Lance Armstrong did it in 37 minutes. So I found a shoeshine guy, gave him a bicycle, trained him for a couple of months, and sent him on the mountain. He completed the route in 42 minutes. From there, Matthieu read about me, got in touch, and that was how the Kenyan Riders started.

So you had this thought in your mind that wouldn’t go away and you just tried to follow it?

Yes. I had the thought in my mind. I reached the point in my life where I have been working for 15 years, I have saved up quite a bit of money, I have done reasonably well for myself, and I thought that I needed a little more purpose than just continuing to work and making more money

. It was a combination of different factors. I was at the right time, and I was financially in the right place, I just paid off my flat, I didn’t have any debts. It has been four years since I have embarked on this project. All my resources are now depleted (laughs).

How about the rest of your team? Are they your friends?

This is a project of pure motion. You start the project, keep on going, and when somebody sees it, he or she is going to come on board. It is like that. Matthieu, my partner, he is my friend now. He read about us going to France and climbing L’Alpe d’Huez in 42 minutes and he thought that this project is a great idea. Then the coach reads about us and he comes and so on. It is about finding people with the right temperament and the right relationship with Africa.

Lance Armstrong did it in 37 minutes. I found a shoeshine guy, gave him a bicycle, and he did it in 42 minutes.

Can you tell us a bit about how your team works?

After Matthieu came on board, we had the bandwidth and the financial muscle to actually build a team and get a whole system in place. In the beginning, we thought that we should model our team after the professional teams in Europe, but after a while, we realize that it would not work. We need to have a root and branch rethinking of what a cycling team in Africa should be. There is no template for that. It is like baking a cake, but we are inventing the ingredients as we go along. We are discovering things all the time. We are finding out what is relevant and what is not.

Take Alberto Contador. He came from Spain. At the age of 14, his father bought him his first bike, which costs about 1,000€. Contador’s father makes 50,000€ a year. So the price of the bike is 1/50th of the father’s annual salary. Then, he goes for a race around the corner in his neighborhood. He wins it and he goes for his next race. It costs him 20€ to participate. Finally, he becomes the champion. Now think about it in the African context. The same bike is not going to cost 1/50th of the father’s salary. It is going to cost 6 times the father’s salary. The race around the corner? There is no race in Africa. The nearest race is the one in Europe. That European cyclist goes for the race and it costs 20€. The African cyclist goes for that same race, and it costs 11,000€. You got to get a visa, fly him there, arrange for accommodation, and so on. The African cyclist’s whole relationship to the machinery and racing cannot be the same as an European’s relationship to all these things. Because the relationship is not the same, you cannot do the same things. On the other hand, Africans are hard workers, which is a strength.

We have to forget about what Contador did, because it is not relevant. We got to see what Kenyans do, what are his impulses, what will he give up, and how hard will he work. And you build a model from the ground-up. That is what I mean about root and branch rethinking about what cycling should be in Africa. We have this team right now, and we think we are on the right path. What we need now is a pool of young talents, maybe 1,000 of them cycling, and at some point in time we will be able to find nine of them who will be good enough to race at the highest levels in Europe. Then it gets complicated. For example, a guy starts cycling at the age of 21 because he took three years to save for a bicycle which costs $130, but the bike is crap. And since he starts at a later age, all of his neural patterns are different; how do you reset the neural patterns in a person in his twenties? All these stuff needs to be taken into consideration. We are building this model with a bunch of guys who are not going to race at any kind of real high level in Europe, but we are putting all the work into them. We are putting all the systems, channels and the cycles into them. So when the next generation of 14 – 16 year old kids graduate from school and they are looking for a job, we will give them a job. They become professional cyclists. You come in and you make $130 a month. It is not a lot when you start, but enough to give you hope. And when they enter the system, it is already very greased. There is much less friction than there was two or three years ago. We know what to do with you; we know what the cycles will be. At some point when they start to crack down on doping in Europe, the gap between them and us will just narrow until it disappears.

So this is a very long-term thing?

People say long-term, but what is long-term? This can happen in a decade, so that is not long-term at all. It is within the lifespan of anybody. It is not that long.

What do you foresee the Kenyan Riders becoming and achieving in the next 5 years?

I have complete faith in the system that we have set up. So, if a corporate sponsor comes on board, we will have the resources to scale the project. This project is set up to be scaled. The endurance talents are there. If we hit whatever the magic number seems to be, 500 or 1,000 young talents doing it, then we will be able select the best cyclists for our team. So in 5 years, we will be racing somewhere in Europe. Not necessarily in the Tour de France, but at some kind of level where we are going to be competitive and we are going to really stand out.

Any plans to bring the Kenyan Riders outside of Kenya into the other parts of Africa?

There are no plans, but everything is on the table. If a corporate sponsor comes on board and they say that they want to do work in Tanzania, or in Uganda, we have the bandwidth to do it. We are an open project. It is possible, but it is really dependent on the agenda of the sponsor that comes on board. Outside of Kenya there’s also a large amount of talent, so it is all about getting the right support.