Men are great, books are better. Latin American men that write great books and have incredible personalities? Someone hold me, I think I’m in heaven.

Singapore Writers Festival came to a close last Sunday. This GoBeyond.SG writer attended Saturday’s panel on South American Literary Traditions. There, I had the pleasure of listening to the earnest feelings of Eduardo Sacheri (via his Mila Kunis look-a-like translator), the wise words of Héctor Abad, and the honest thoughts of JP Cuenca. 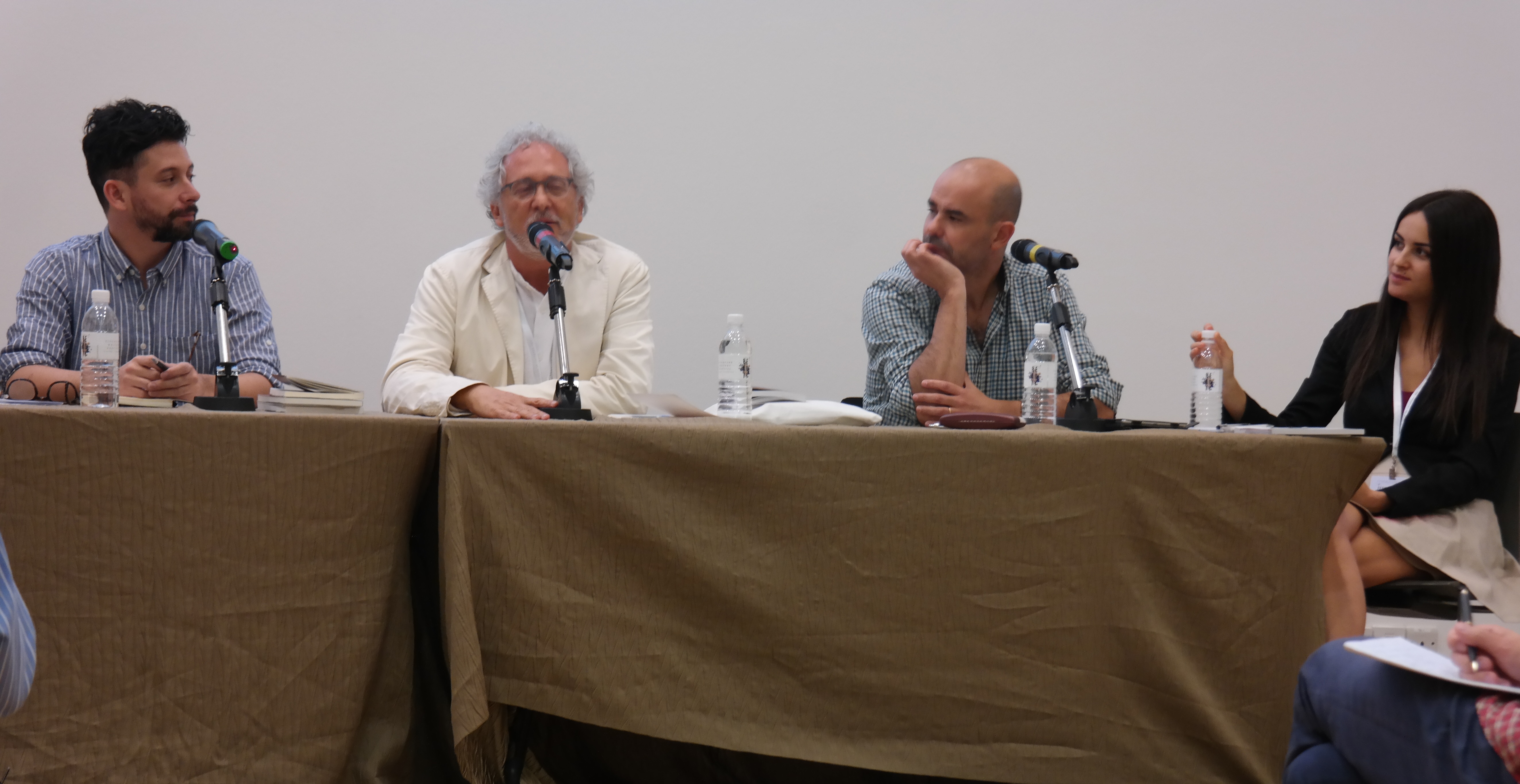 Your words speak to me

They began by reading excerpts from their books in their native language, which was to be followed by the English version read by the moderator. We got to hear how beautiful the words of Latin America flow, and how gripping the passages were.

“Look well and you’ll see that no matter what you look like (your face, your body, front or backside) somewhere, at some time, you’ll have been a prototype of beauty. And a beauty you’ll be, in any case, for someone.”

They spoke about their books, what traditions they felt were involved in the writing of their region, and other foreign influences.

Eduardo said that the stories in Argentina involved playing with the general and the particular. This was done by writing not only about the country’s history, but about what happened to the people as a society as a result of its violent past and military rule. He also mentioned how Argentina was influenced by and always longed to be like Europe. In fact it did not view itself as part of Latin America. But now, almost all its young writers read books by Argentinean and Latin American authors.

Meanwhile, Héctor felt that the real tradition in Colombian writing is actually centered around the language (Spanish). He said, the key to writing is in the experience the writer and part of this experience is the language. In one of his books, he had hidden poetry within his prose. 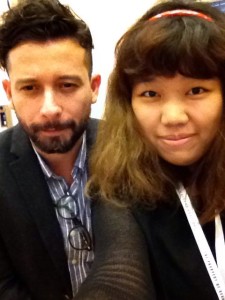 Not going to lie, I was blushing a little after taking this selfie with JP

As for JP, although he could not speak for all Brazilian authors, he agreed that personal experiences were important, especially considering how he had written a story set in Japanese with only Japanese characters because of the Japanese cartoons he watched as a kid (Brazil has the largest diaspora of Japanese by the way).“It’s pretty absurd for a Brazilian,” he admitted, saying he was only interested in what was not his own, which explains his love for anime and Godzilla.

Funny you should say that

What really struck me during this talk was that these men had written tales and memoirs so dark in their own ways, yet the faces in front of me were always smiling as they joked with one another.

There’s no language barrier when a selfie is involved!

“My father’s from Argentina and having an Argentinean father in Brazil is a traumatic experience,” was all JP needed to say as the audience held in our laughter, eagerly awaiting the Argentinean Eduardo’s response.

After a few murmurings between Eduardo and his translator, he raised his eyebrows and declared (in English), “An Argentinean father is marvelous in any country!” which got the audience howling and applauding.

Héctor also told a hilarious tale of his time in Singapore. During his visit to St. Andrew’s Cathedral, he saw a man chasing after grasshoppers with a net. Bewildered, he asked the man what he was doing. The man responded that he was catching grasshoppers for his birds, as they sang better after eating them. 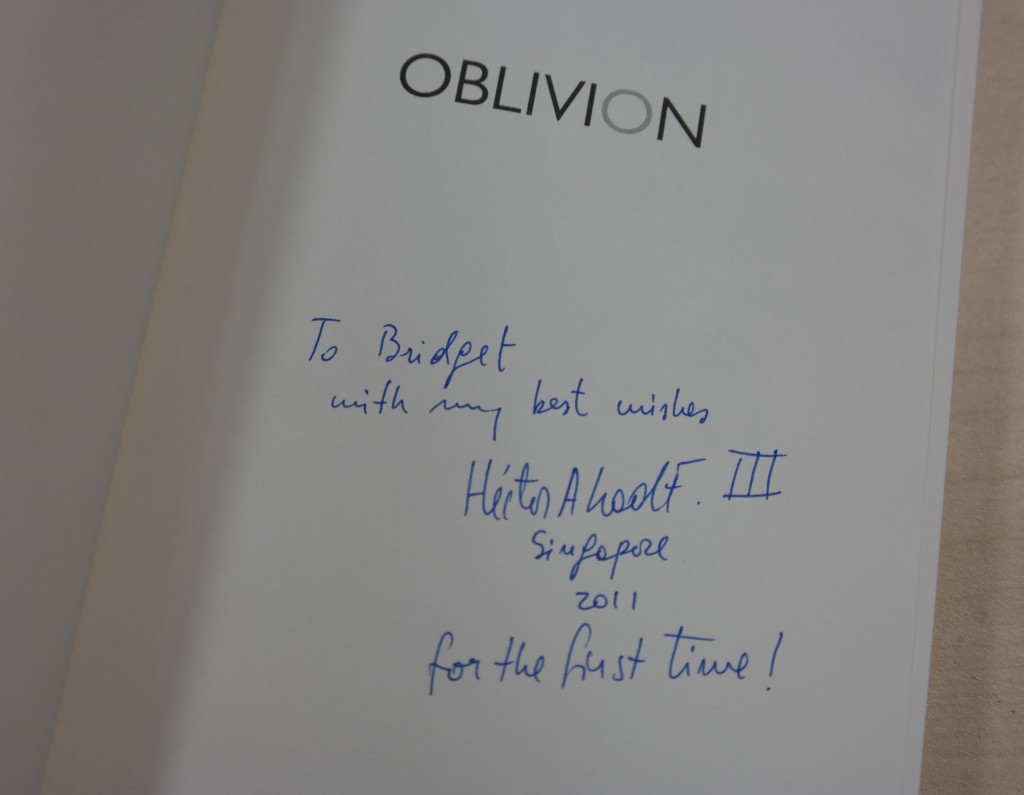 An autograph from Héctor Abad on the day of the Singapore Writers Festival. Strange, I could’ve sworn it was 2014…

These brilliant authors also gave some writing tips throughout the talk, which will now be kindly shared with you.

As a writer, you need to look out at all that is going on around you and hear all that people say. Even the smallest things could trigger an idea, and that idea could turn into the most enchanting of tales.

Not everyone goes through a heartbreaking tragedy or a miraculous love story. Most of us live a pretty normal life, and hey, that’s definitely not a bad thing! But it could get a little tricky if we want to write something exciting but have not experienced it ourselves. This is why we sometimes have to live vicariously through other means, like reading. Everything you read is relevant and will help you.

Did you attend the Singapore Writers Festival? What was your favourite talk? Let us know in the comments!