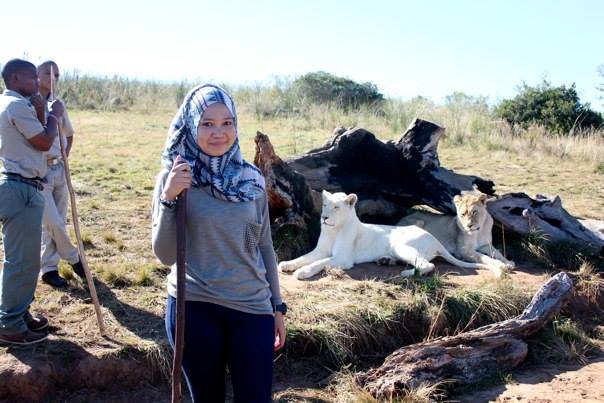 Sharifah at a Cat Sanctuary with rescued lions. Photo by: Sharifah Fadhilah Alshahab

Sharifah, who grew up watching the animated television series, The Wild Thornberry, is an avid fan of animals and filmmaking. This internship allowed her to pursue both interests at the same time.

“I was very, very excited,” she reminisced. Sharifah once worked at the Night Safari as a tour guide. However, the animals there were in an enclosure and not a real safari. “I always wanted to go to a proper safari in Africa to see what it was like over there.”

Zooming in on Animal Life 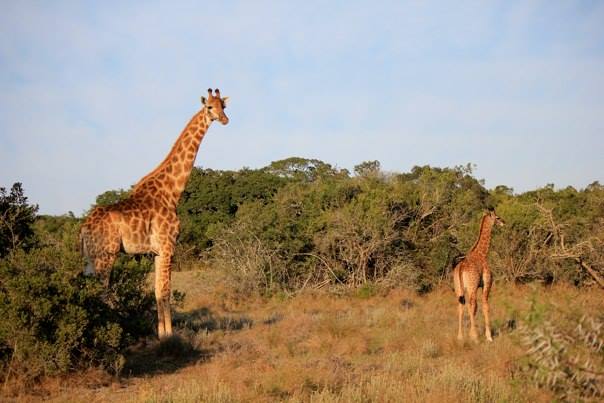 Sharifah’s eagerness to take on the job also came with a great deal of stress. She feared being underqualified, since she felt she did not know enough about camerawork or animals, and had high expectations to succeed at her job. “Maybe it’s because I’m used to a stressful life in Singapore,” she surmised. “But my job was really fun. There was no pressure or anything. It might be because I put that stress on myself.”

The footage the interns took was left with the company, but they were also free to use their captured footage in any way they wanted. In Sharifah’s case, she pieced her footage together into a self-crafted story. 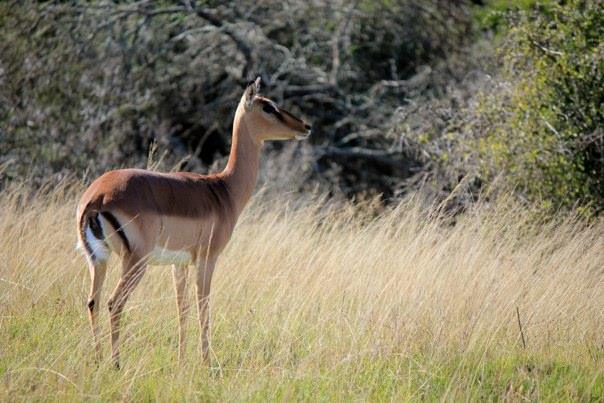 As a filmmaker, Sharifah and her team of fellow interns were separated from the regular tourists, who traveled in jeeps the whole ride. The intern team could hop out of the jeeps and into the bushes to film. Sharifah had her fair share of wacky encounters with the animals. A particular curious elephant went right up to her jeep, put his trunk into the car and smacked the camera.

An important point Sharifah brought up about filming animals is to capture them on footage from a safe distance. “We make sure not to provoke the animals,” she said. “We have a duty of care towards them, because it’s pretentious to make wildlife films that hope to spread the message of conservation while not taking care of animals in the process.”

A Motley Crew of Interns 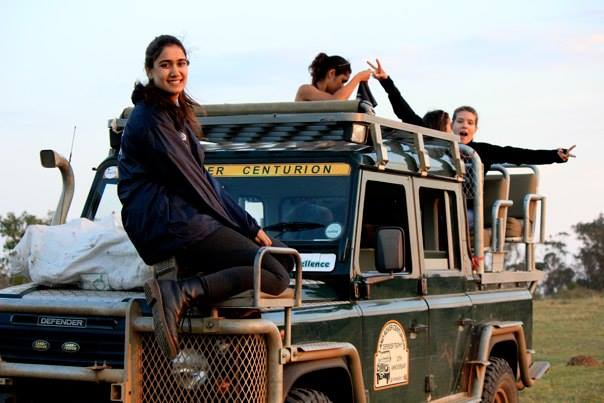 While filming in South Africa, Sharifah worked with a team of colleagues from all around the world, including India, Amsterdam, South Africa, as well as America.

“My colleagues are pretty laid back,” Sharifah said. “But I don’t think that this is because they’re from South Africa or the culture here.” Considering that Sharifah’s job was to film, she would film in the morning and evening. However, the team would take a break during afternoons to have their lunch. This was because the afternoon weather is too hot for the animals to be out, so it was unproductive for the team to remain filming at such a time.

A Walk in the Cheetah Park

Sharifah was proud to say that she had officially walked a cheetah. This happened at the Cheetah Walk & Wildcat Combo, which is a wildlife rehabilitation program offered by Tenikwa Wildlife Awareness & Rehabilitation, for cheetahs that are unprepared to be released into the wild. The protected cheetahs are either sick, injured, or spent their whole lives as domestic pets. Since they need exercise, tourists are allowed to take them on walks. 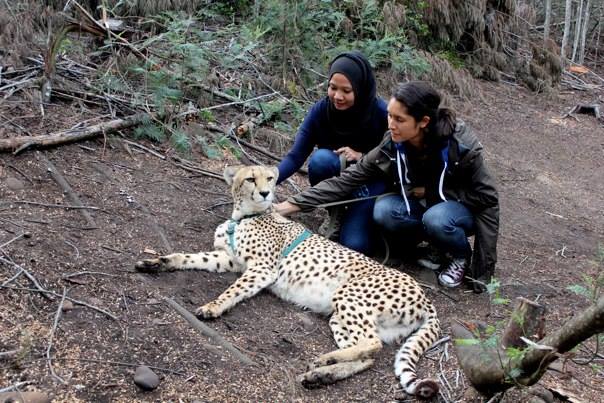 “The rescued cheetahs are placed into smaller, conservation parks,” Sharifah explained. “They would be used as ambassadors to teach people more about their species.”

Safe and Sound in South Africa 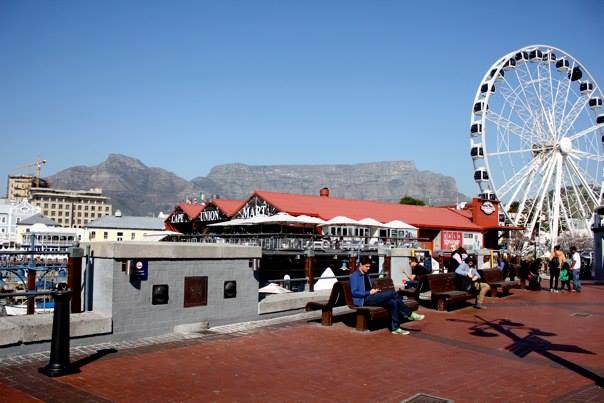 A view of Cape Town and Table Mountain. Photo by: Sharifah Fadhilah Alshahab

As South Africa is home to a variety of many cultures, Sharifah did not have much difficulty assimilating into life there. However, she was warned to be extra careful in Johannesburg. South Africa Apartheid rule was only recently abolished in 1994, and Sharifah believes that its effects will still take some time to die out completely.

(Editor’s note: Apartheid was a political system that segregated Africa’s white and non-white populations. During South African apartheid, more than three million black citizens were forced to move from their homes to segregated neighborhoods.)

But in her opinion, the same advice applies everywhere. She was alone in Johannesburg for two weeks, and it was safe.

“But of course, don’t do stupid things. I didn’t, so nobody wanted to harm me.”

Travelling around for leisure Cape Town: The Great esCape

One of Sharifah’s most heartwarming experiences took place in Cape Town. The lady she was staying with had a mother who was constantly fretting over her wellbeing. “‘How are you alone in this place?’ she would ask, and she would give me a lot of food,” Sharifah recalled. She spent her days in Cape Town with a Muslim family, and since she was there during fasting month, they told her to stay longer so that they can celebrate Hari Raya together.

Sharifah loves South Africa for its proximity to wildlife and nature, which the locals kept intact amidst the technology development in the country.

“We live a city life with very little chance to get in touch with the natural world in Singapore, whereas in South Africa, wildlife is abundant. So I appreciate the ability to escape the city life.” 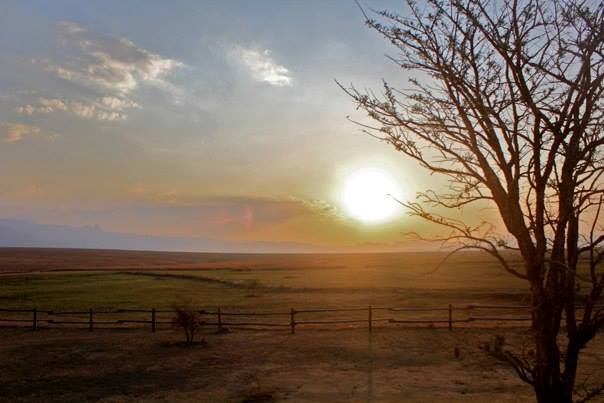 To those who wish to travel to South Africa, Sharifah advises you to “appreciate the diversity and immerse yourself in the country properly. From one end to the other of South Africa, you can see the difference between Cape Town and Johannesburg. I would encourage a traveler to see the entire country, and not just one place.”

Take a walk on the wild side and watch Sharifah’s wildlife video below.