‘Tis the season to be jolly! From Ethiopia to Venezuela, this is how Christmas is celebrated in 5 lesser known parts of the world. 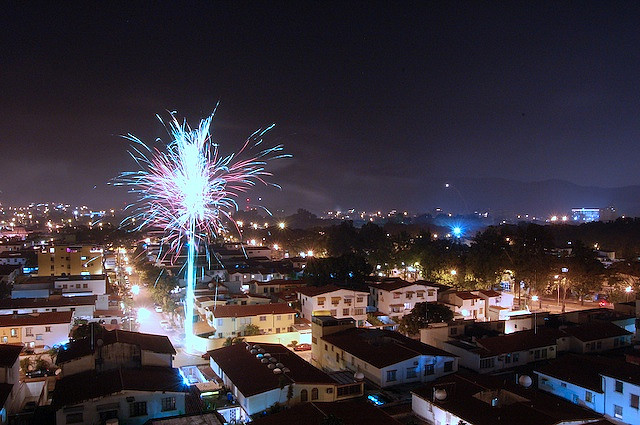 Christmas is a huge occasion in Latin America and especially in Venezuela. Frequent firework shows make for a very festive and colourful atmosphere.

One unique thing about Christmas in Venezuela is their gaita music. It is a type of folk music from the Zalia state combining traditional Christmas songs with the Latin and African influences in the region. Celebrations begin on 4th December, which is Santa Barbara’s Day. However, celebrations only really start from 21st December onwards till the 25th. Pesebre or the Nativity scene decorations are more popular than the Christmas tree decorations. Venezuelan children are taught that presents are brought by El Niño Jesus or Baby Jesus, instead of Santa Claus. One of the most important dishes cooked during Christmas is the hallacas which is a type of meat pie with cornmeal crust wrapped in banana leaves and boiled for a couple of hours.

In Caracas, due to road closures, worshippers head to church on roller-skates! After which, families go back home for a large meal and exchange presents. On Christmas Day, everyone attends Misa de Gallo at 5am, also nicknamed the Mass of the Rooster because of its calling time. After mass, street celebrations and house visits are something to look forward to for the rest of the day. As a Muslim-majority country, Christmas is not a designated public holiday in Kazakhstan. Hence if Christmas Day does not fall on a weekend, it is celebrated the Sunday before 25th December (or 7th January if they are Orthodox Christians!) 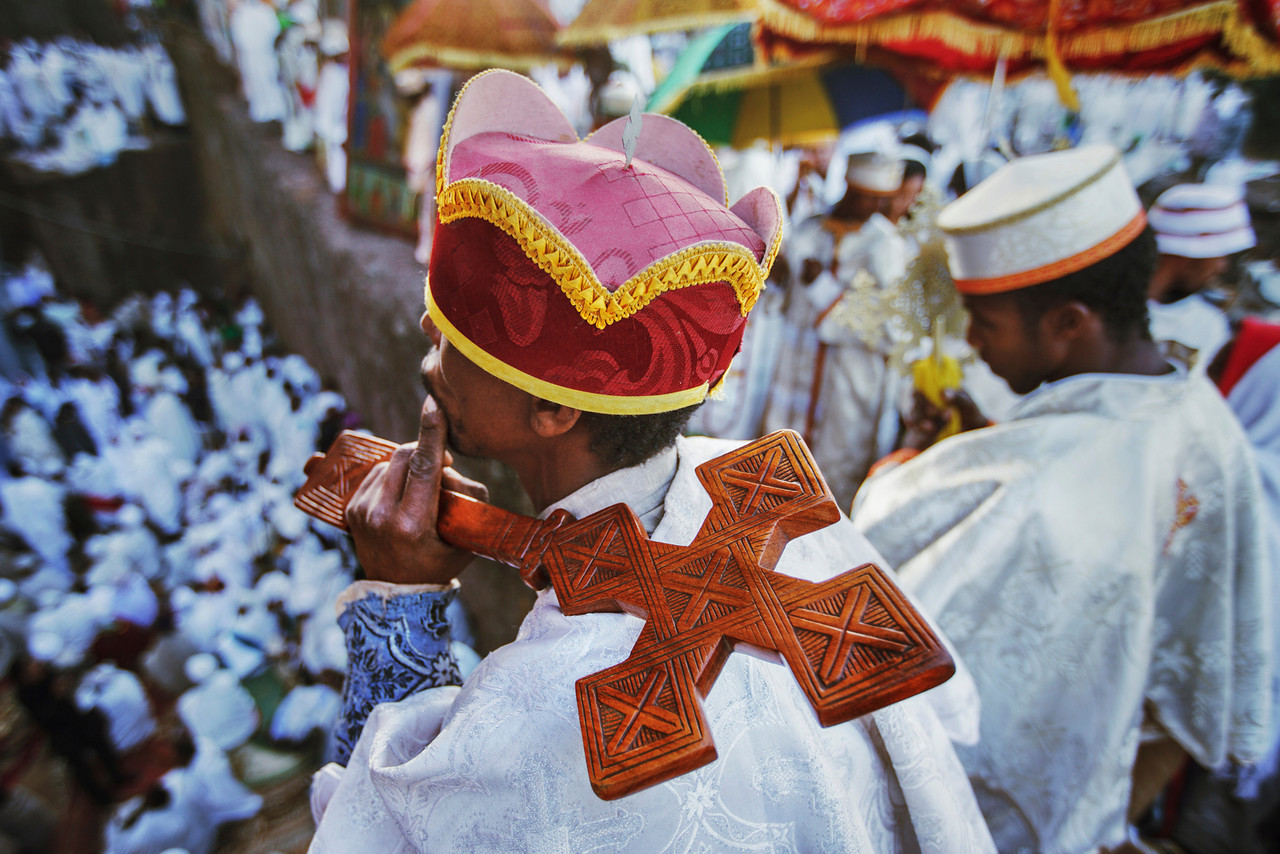 Christmas in Ethiopia is known as Ganna and is celebrated on 7th January, following the Julian calendar, which is used by Orthodox Christians.

Christmas Eve (6th January) is a day of fasting. Orthodox Christians place spiritual emphasis on Christmas Day and practices such as gift exchanges are uncommon. On Christmas morning, worshippers dress in white. Most of them will wear a traditional garment called shamma, which is worn much like a toga. Thousands of people make a pilgrimage to Lalibela, also known as the Jerusalem of Africa, where 12 churches were carved into rock in the 12th century.

The food traditionally eaten during Ganna is called wat which is a type of spicy meat stew with vegetables, eaten with injera, a type of flatbread.

Twelve days after Ganna, Ethiopians celebrate Timkat, the baptism of Jesus on 19th January. Children walk to the church in a procession accompanied by the beats of musical instruments; adults wear the shamma and the priests wear red and white robes and carry embroidered fringed umbrellas. 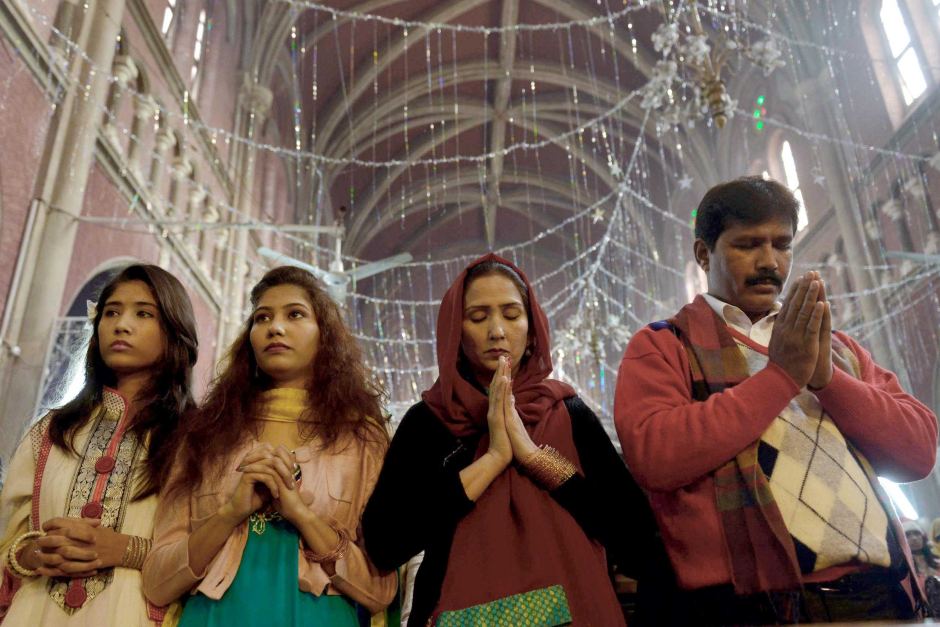 Did you know that there are over 5 million Christians living in Pakistan? While Christians make up just over 2% of the population, it is not insignificant. 25th December is a public holiday in Pakistan only because Jinnah, the founder of Pakistan was born on this day.

Before and during the Advent, Christian Pakistanis attend spiritual seminars. During the last week of Advent, choirs go from house to house singing carols and often families would donate something in return. The donation goes to charity or the church.

On Christmas Eve, churches are packed for midnight or vigil mass services, worshippers sing special hymns and fireworks are also let out sometimes.

On Christmas Day or Bara Din, Christians go to Church wearing their best and most colourful clothes. In the evening, people spend time with their families, feasting and doing house visits.

If you ever find yourself in Pakistan during Christmas, remember to greet people with Bara Din Mubarrak Ho, which is ‘Merry Christmas’ in Urdu. Santa Claus is known as Christmas Baba. Look out for common Christmas decorations such as stars atop the roof of homes. The streets are decorated and lit. Crib competitions and exchange of Christmas cakes are things you might also expect. Palestinian boy scouts play bagpipes in Manger Square, outside the Church of Nativity, traditionally believed by Christians to be the birthplace of Jesus Christ, in the West Bank town of Bethlehem. (AP Photo/ Nasser Shiyoukhi)

Christmas is a significant event in the Palestinian territories of the West Bank because Bethlehem, the town where Jesus is believed to have been born, is located there. Many Christian denominations gather in Bethlehem during Christmas. As some denominations believe Christmas falls on 25th December while others on 7th January, the festive seasons stretches for a long time. Even though Palestine has a majority Muslim population, Christmas is also celebrated because Jesus is also a prophet in Islam.

On Christmas Eve, a parade with bagpipe bands march through town following a tradition brought over by the British when they colonized the area between 1920 and 1948. People dress up as Santa Clause and give out sweets. The streets and main square are decorated with lights and Christmas carols are sung in Manger Square.

The Church of Nativity is perhaps the most famous hallmark in Bethlehem. The church is built over the spot where it is traditionally thought Jesus was born. On Christmas Eve, crowds and frankincense fill the church. As the church is administered by three churches (Roman Catholic, Greek Orthodox and Armenian Apostolic Churches), the Mass of Navtivity is held on the respective dates that different denominations believe Christmas falls on.

For more of GoBeyond.SG’s Christmas-related articles, check them out here!