At some point in my second year of university in America, I was desperately itching for an epic summer break. It must’ve been really cold outside and the snow was probably horrid, because all I thought about was just to get on a beach and frolic in the sun until I was content. Searching through the university resources online for Study Abroad programmes, I came across this thing called Semester at Sea. Long story short, it offered me a one-month academic journey to the Latin American and Caribbean region… on a ship. 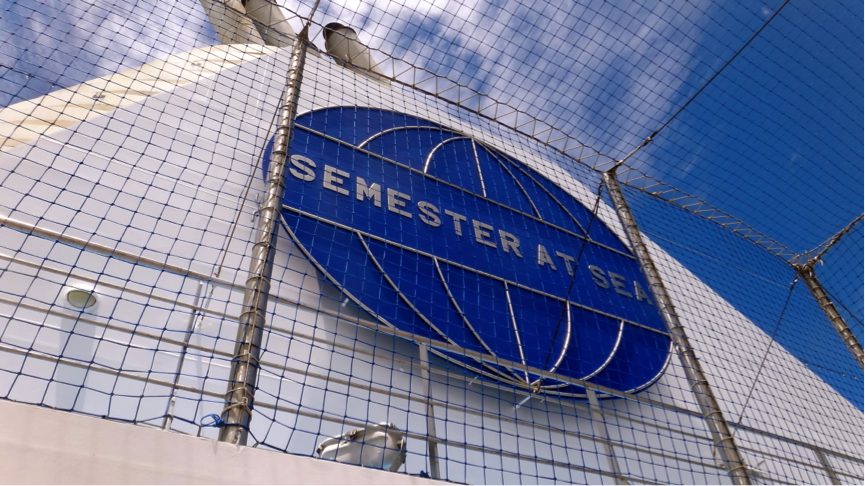 At first, it did sound like it was an epic cruise holiday to Latin America with hundreds of other students on board, which perfectly fitted the bill of what I wanted, in direct contrast to the snowstorm that was raging outside my creaky library window at that point in time. Besides, as a sheltered Singaporean who was merely taking trips around Asia for small family holidays back in the day, I hadn’t had the smallest clue about Latin America and Caribbean. I mean sure, yes it’s tropical, sunny, and most people speak Spanish, but the intricacies of each country’s history and politics? Not a chance, I was completely culturally ignorant. The region represented a black void of knowledge that I wanted to fill up by simply living within it, and personally discovering it. It didn’t take much for me to promptly decide that I wanted to hop aboard, literally.

Being at Sea for an entire month

And so, at the end of May 2012, I embarked on a trip on the seas to five different countries: Peru, Ecuador, Panama, Costa Rica, and Belize. It used to be a distant dream to be able to sail for so long on a ship,  deterred by purely logistical concerns such as money and time. However, the programme was academically sponsored by the University of Virginia, which not only meant that liberal arts courses of all kinds were offered on the ship, but also that the the one-month shipboard programme didn’t actually cost more than what I would pay for a week on a luxury liner. It was pretty much an accidental dream come true. Honestly if I had wanted to pursue a better deal than this, I would’ve had to join the Singapore Navy and serve for years in order to set sail for a few months at a time. 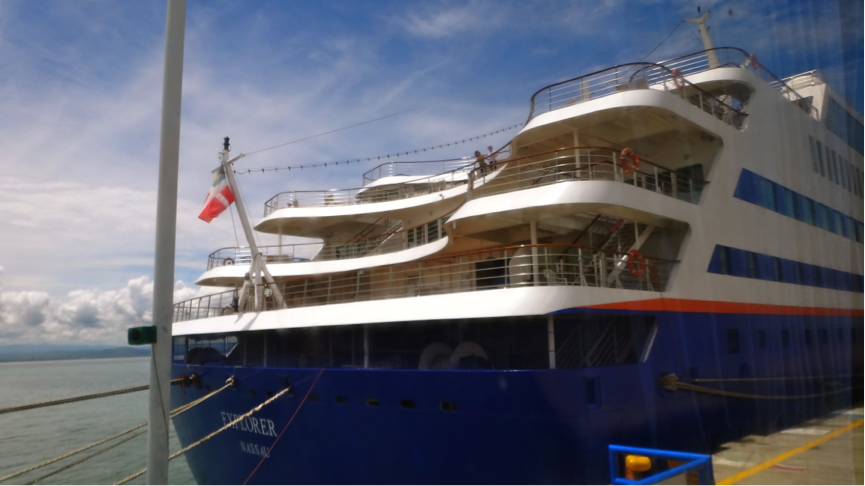 The MV Explorer, the homeboy ship of the Semester at Sea programme. Living on a ship for an entire month meant that I got to learn a lot about ship customs and technicalities. The MV Explorer was built in Nassau, and hence onboard we were all subjected to the laws of Bahamas!

I had never been on a boat for such a long time before, and at the beginning there was a definite sense of displacement from familiar surroundings. Being in a foreign environment (literally living on water for a month) gave me an immediate sense of strangeness. One of the things I discovered quite quickly was the immense freedom of time I had to myself, simply because I had neither a phone nor an internet connection. Predictably I got pretty squeamish in the first week of just being isolated away from our electronics. It wasn’t rare to overhear conversations about how people missed Facebook or desperately wanted to Skype somebody from back home. Breakfast on the top deck, away from familiarity

But about a week into the programme, this inner squirming turned into a sense of liberation that we realised we were all secretly craving for: I realised that this life journey was my own, I didn’t have to answer to anyone about the choices I made everyday, and the time initially spent checking on the lives of others and feeling meaningless envy about the greener grass on the other sides (Editor’s Note: Just say FACEBOOK. We’re all guilty of it too, Jon.) could be better spent actually living and enjoying what was in front of me. The first orientation address when I boarded the MV Explorer in a tiny harbour off Puntarenas, Costa Rica! The programme had 259 students, and 67 faculty and staff members. (Source: http://www.semesteratsea.org/2012/05/23/embarking-the-mv-explorer-for-the-first-time/s12_embarkation023/)

Part of the reason why I wanted to explore a new place was also to get to know new people. I definitely got to meet lots of locals while I was in those respective countries (more on that in my future posts), but one highlight was making friends with fellow students on board. Semester at Sea is an American programme, and its participants are largely American students that come from nearly all states of the nation, engaged in various fields of study. My cabin roommates came from universities in Wisconsin, Arizona, and Massachusetts, studying Finance, Engineering, and Physics. I’ve made friends from Spain, Ethiopia, Brazil, and Nigeria. My main circle of friends on the programme! We were a really lively lot, and spent our times outside of our lectures sharing about our lives, planning trips for the various countries we docked at, and simply having an absolutely great time. I still keep in touch with many of them. (Source: https://fbcdn-sphotos-c-a.akamaihd.net/hphotos-ak-ash3/600954_3100545164005_1925124674_n.jpg)

It made for a really lively discussion over meals as we talked about our backgrounds and approached problems with different ideas. Having lived in Singapore all my life, I felt it was important to break out of my bubble to learn from people who had lived lives starkly different from mine, and in so doing enrich myself with the experiences of others. 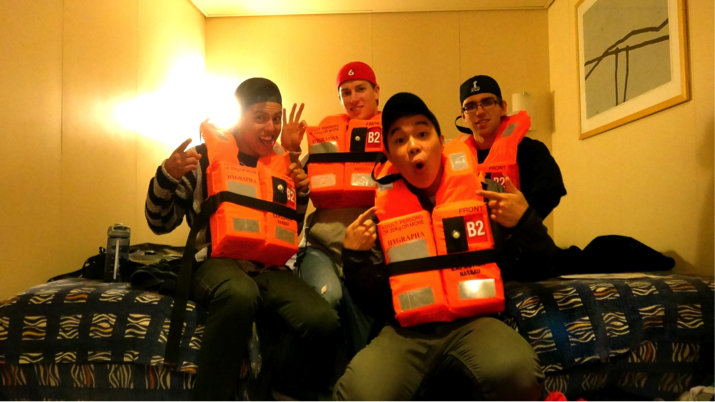 Thank goodness, I quickly made great friends. My cabin consisted of three great bros (they each studied in Arizona, Wisconsin, and Massachusetts respectively), and yours truly. We still keep in touch sporadically to this day, and we always exchange news about who’s been exploring where

It would be far-fetched to say that the whole adventure radically changed me and totally transformed my outlook on life, because such moments don’t happen with a single journey abroad. However, at the end of it all, I emerged from the ship a slightly different person. I critically reflected on my priorities in life, and my goals for the future. 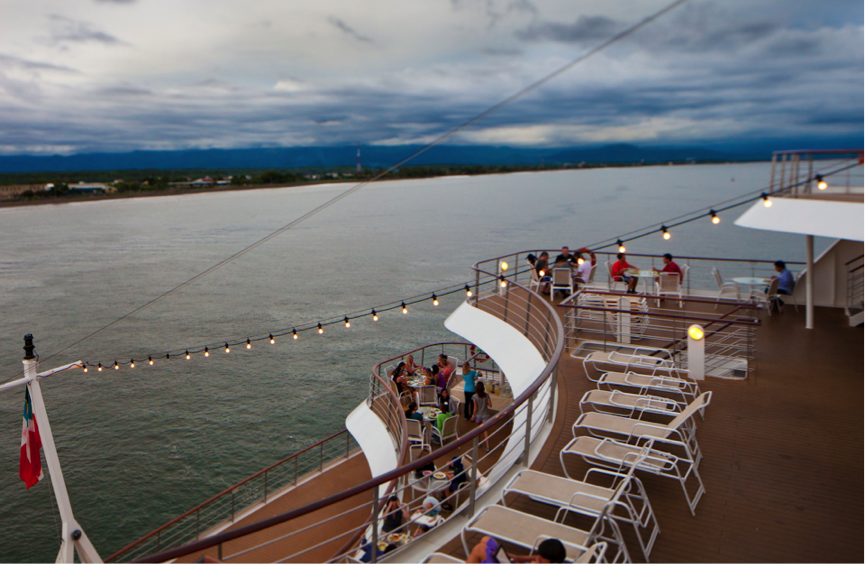 A regular evening at sea would typically involve whole group dinners with different groups of students. We would chat into the evening, finding out so much about each other’s lives. I was really happy that I could share about Singapore, and being a ship full of go-getting students, they were more than happy to listen to me and of course, ask me if I could take them on a tour around Singapore should they decide to visit. (Source: http://www.semesteratsea.org/2012/05/23/embarking-the-mv-explorer-for-the-first-time/s12_embarkation025/)

Learning about Latin America and its Human Rights system

Being an academic programme, we had to take two courses on board and attend lectures while sailing to a particular country. Upon docking, we then had time entirely to ourselves (ranging from a few days to a week) to explore the place, or go on arranged projects and trips to get to know the community better. The gateway course that the entire cohort took was the Comparative Politics course on the Latin American region. 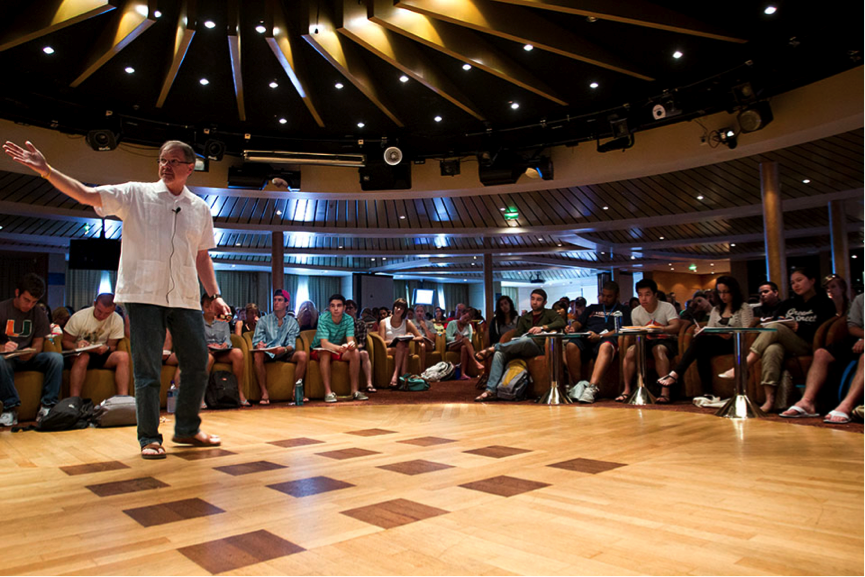 Professor Peter Sanchez from Loyola University Chicago teaching the Comparative Politics seminar on Latin America. Before docking, we would get a comprehensive briefing about each country’s socio-political history and culture. I had a pretty good discussion with Prof Sanchez about how Panama was economically and structurally similar to Singapore! (Source: http://www.semesteratsea.org/2012/05/30/global-studies-professor-peter-sanchez-on-peru-and-latin-america/img_0127-2/)

This was incredibly eye-opening, as I previously never had the interest nor time to learn more about Latin America. As a Singaporean tucked away comfortably in a nest in the middle of Southeast Asia, the Latin American region just seemed a distant faraway land, which had no consequence for my life back home. But this seminar really opened my eyes to the history, politics, and culture of the place. It was also highly effective that each seminar on a particular country was taught right before we would dock there. Entering Peru (our first destination) armed with knowledge and a certain level of appreciation for its history, distinguished us from the tourists who were there on a holiday. We decided that these weren’t mere travel destinations we’d tick off a checklist which could blindly be used as bragging rights; we were going to allow these explorations to enrich our lives.

The main course that I really focused on, though, was my International Relations seminar on Human Rights in Latin America. It ran for three hours every day we were at sea, where we learnt about the entire global Human Rights framework set by the United Nations, and how the Latin American region specifically deals with its Human Rights cases. I had imagined this course to be a textbook-heavy course about international law and state sovereignty with stale examples from history, but I was wrong. Instead, it made use of current UN statutes and reports, and we visited an actual human rights court in Latin America. 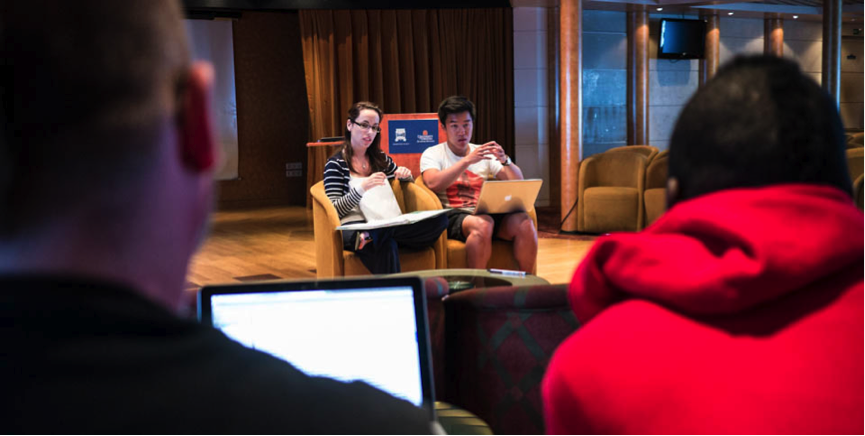 I teamed up with a really capable American student and here we were, simulating a human rights court during our seminar. We were representing the government of Ecuador and defending the nation against a series of accusations pertaining to human rights violations. We eventually got to meet REAL human rights court judges in Costa Rica! (Source: http://www.semesteratsea.org/2012/06/13/students-visit-the-inter-american-human-rights-court-in-costa-rica/p1000418/) 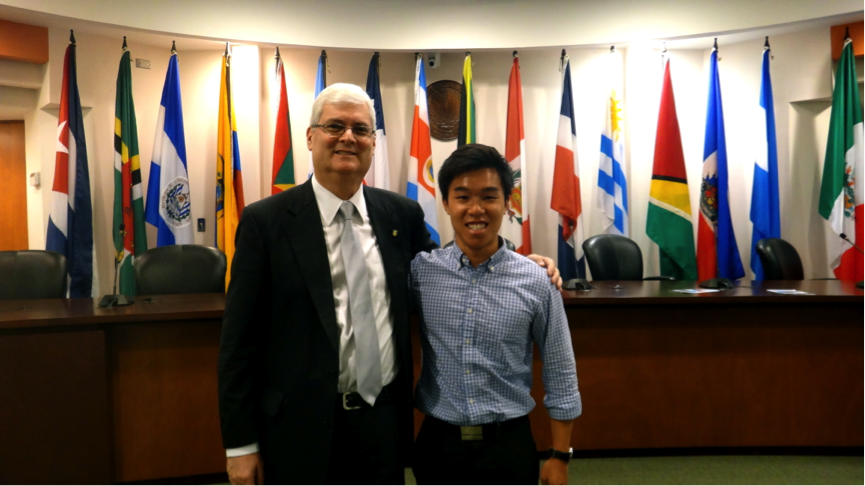 I got the chance to engage in a discussion about Human Rights with Judge Manuel E. Ventura, who serves on the panel in the Inter-American Court of Human Rights in San Jose, Costa Rica. The court handles human rights violations across both North America and Latin America. It seemed like a particularly complex court to run, in part due to the fact that they had to operate fluently in both English and Spanish. This was an opportunity that I greatly treasured.

At this point, it might be weird to go on talking about my shipboard experience and my academic courses, but not on the very reason why I wanted to participate in the Semester at Sea programme in the first place: the countries themselves! In my next post, I’ll share about the wondrous countries of Peru and Ecuador, the first two destinations of the programme.

Southbound past the Equator, more sights and stories await!