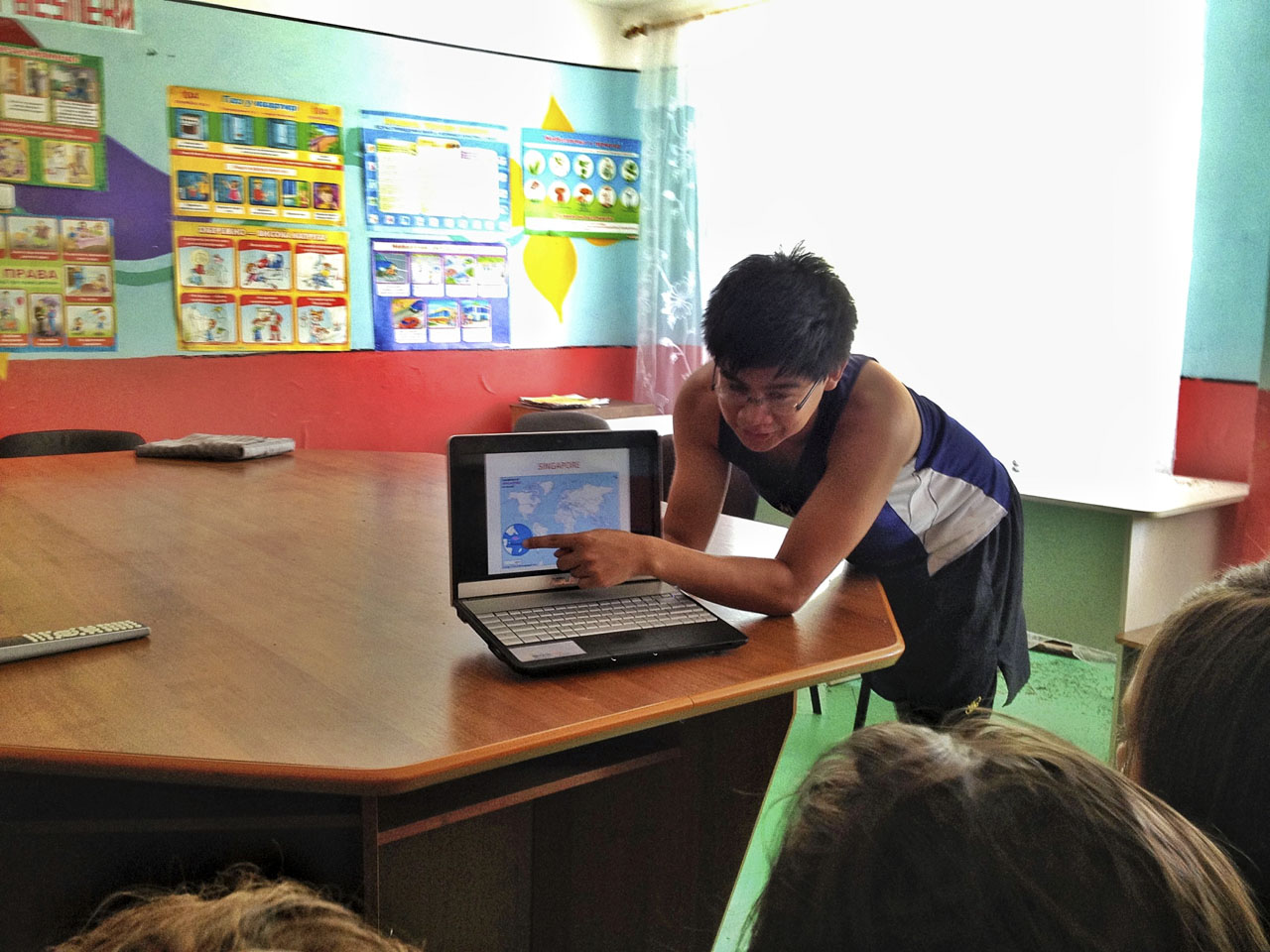 Mark offers his thoughts on how Singapore is similar and different from Ukraine. Catch up on Part I of Mark’s story, if you haven’t read it yet.

Life is really slow-paced there and people are content with the way things are, even with the rustic transport system.

Tell us more. How would you compare the transport there with Singapore’s?

Transport there is reliable. Buses will come and you do not have to wait for very long. Their buses are usually small coaches, approximately 20-seater and can get cramped inside. There is no air-conditioning. Bus drivers close the door by pulling a string that is tied to the door. Before you alight, you would have to shout to the driver to stop, otherwise the bus would not stop.

And when you pay for the bus fare, you pass the money from where you are to the driver. So, if you are seated right at the back of the bus, your money will be passed from the person seated in front of you to the person right at the front of the bus. And when you have change, the same will happen from the front to the back. It was pretty fascinating. People do not think of pocketing the money either.

Over there, there is no concept of distance fare like in Singapore. Bus fares are very cheap – each bus ride costs approximately SGD$0.20 or less! One ticket entitles you to take the bus all the way to the final stop.

The trains there are not city metros and operate mostly for travels across cities. The trains are really old – I do not think you can find similar ones in Singapore. 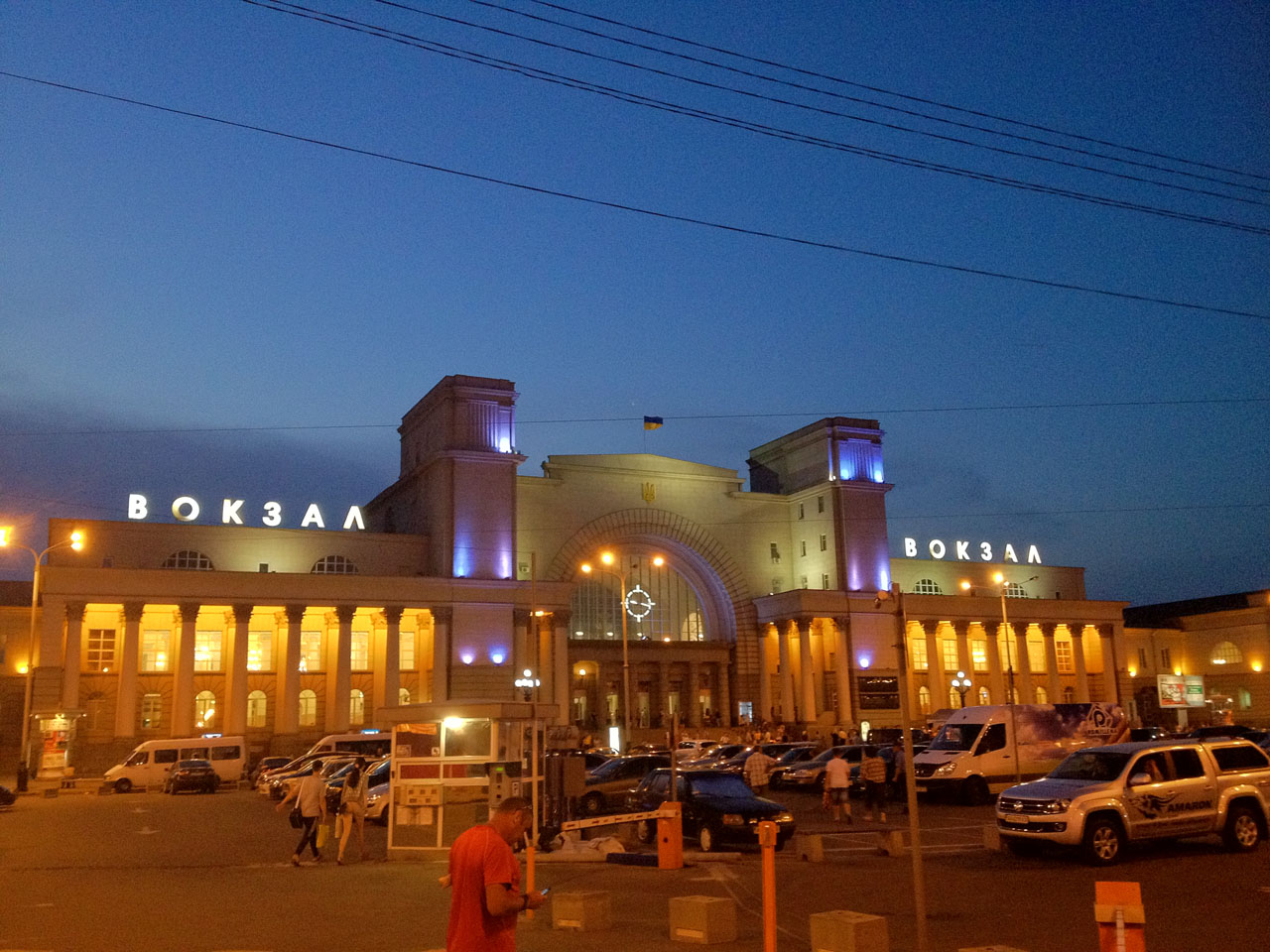 Train station in the bigger city, Dnipropetrovsk – a big difference from the small city’s train station

I took a 13-hour overnight train ride by myself when I first arrived. I bought the tickets, followed the symbols as best as I could because I did not understand Ukrainian or Russian. Thankfully, I managed to get to my cabin. It was a sleeper train and I was with three old ladies who did not speak a word of English. I did not know how to fix my bed but fortunately, they helped me. Honestly, I felt quite lonely on my first night there because there was no one to talk to and when I looked out of the windows, everything was foreign to me.

Can you compare the standard and cost of living between Singapore and Ukraine?

It is very cheap to live there. As I have mentioned earlier, bus rides cost less than SGD$0.20. Food is cheap too. It was quite hard to find cafes or restaurants, so most of the time we would cook. Approximately SGD$50 worth of groceries could last the three or four of us one to two weeks.

One thing I found very interesting was that the locals do not like to spend money. For example, they would rather walk than spend money taking a bus. I walked with them once, and we ended up walking for two hours!

I guess this is mainly due to the fact that their earnings are rather low and can barely cover their living costs. So most adults there tend to have multiple jobs and it is not uncommon for both parents to be breadwinners. Many of my peers’ parents work odd jobs, have unpredictable working hours and some even work till the wee hours of the morning. 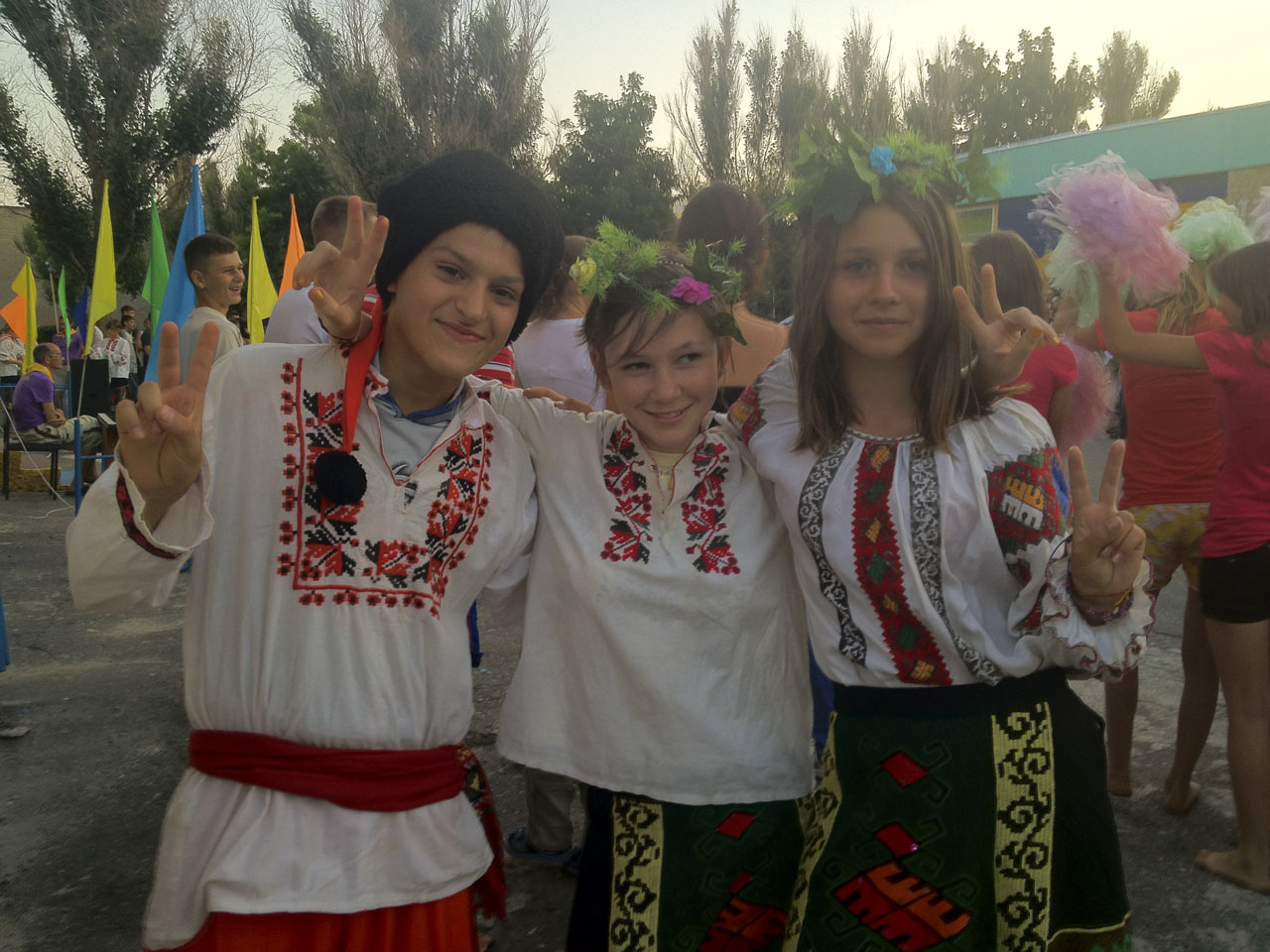 Most of them stay in housing similar to the Housing Development Board flats in Singapore, but less developed than ours. Lifts there can be quite scary – they are dimly lit and the buttons have no numbers on them. Even some of my Ukrainian friends tell me not to take them, because they might just crash!

Their homes are very simple and small. There is usually just a living room, a kitchen and a toilet and that is all – there are no bedrooms. The sofa usually doubles as a bed. I would say they are rather simple in the way they live.

They would always have tea, no matter the occasion. Even if we were to be running late for an appointment, they would insist on finishing their tea first before leaving their home.

What do you think are some similarities or differences between Ukrainians and Singaporeans?

Ukrainians lead very simple, but no less fulfilling lives. They find it really easy to have fun. I think they are very different from Singaporeans and it might be terribly difficult for them to get used to the fast-paced life in Singapore. A photo of our CBD was enough to wow my Ukrainian friends into silence. They could not understand the need for such tall buildings!

Ukrainians generally have very carefree attitudes, though there are many who constantly strive for more, as a lot of them are unable to travel outside of the country. Some do not even travel within Ukraine.

Did you travel around the country?

I wanted to visit so many Ukrainian cities, but unfortunately, I could not. A single trip from where I was to the western city of Lviv was a 25-hour train ride!

Well, beer over there is cheaper than water. And while at the summer camp, I had to shower with sea water. There were proper shower facilities, but seawater poured from the tap! It was bizarre showering with hot and cold seawater. The kids there do not shower that often, because they swim in the sea in the mornings and evenings. Not showering for a long time was definitely an unforgettable experience for me.

Would you consider studying or working in Ukraine in the future?

I think it might be difficult to study there, as the lingua franca is Ukrainian or Russian, which I am not competent at. But yes, I would consider working in the main cities, as I find it easy to communicate with most Ukrainians. 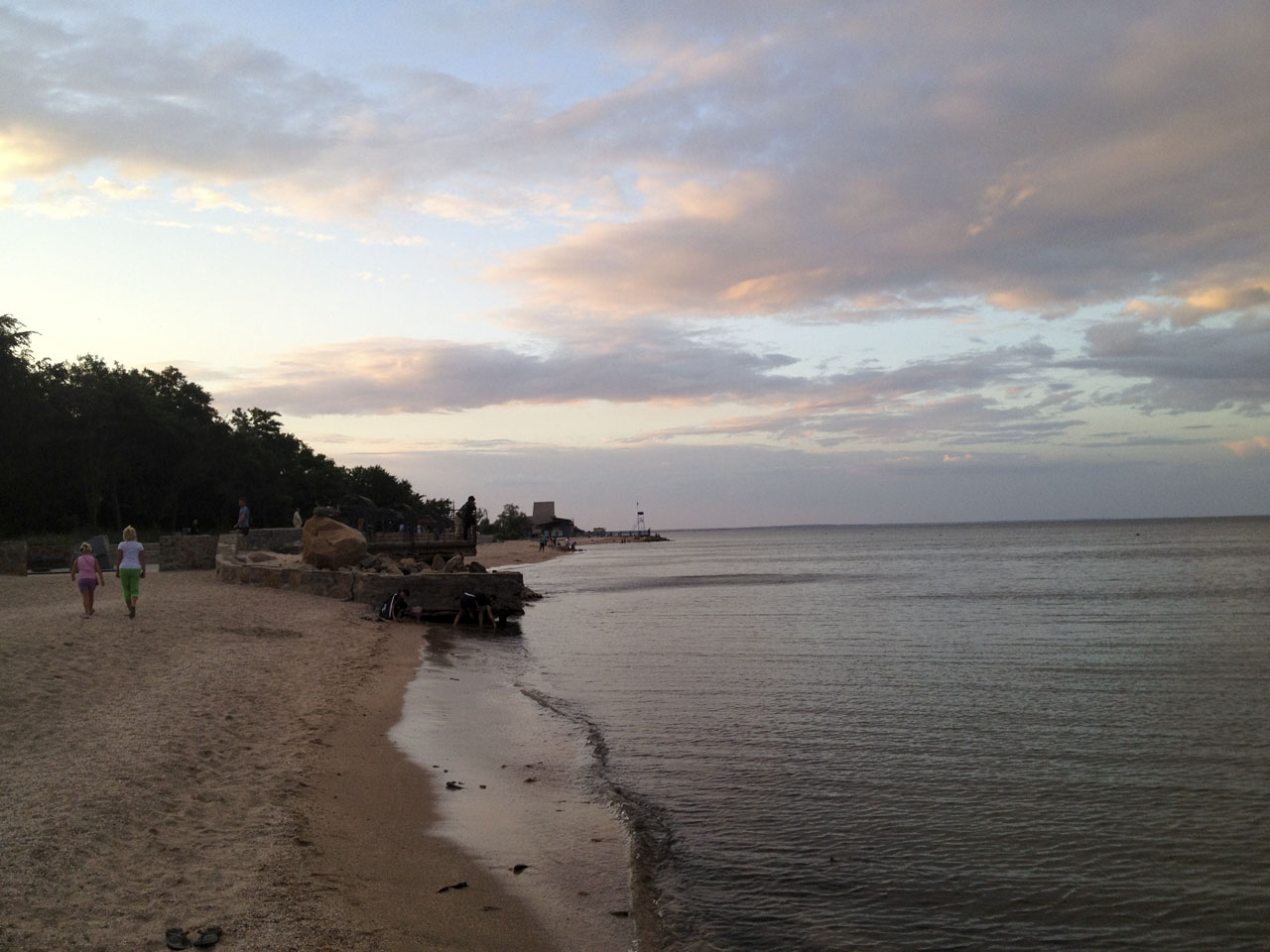 The entire southern coast of Ukraine is a beach | PHOTO: Mark Thompson

But you mentioned that a lot of them do not speak English.

Yeah, that is true but locals in the capital looking to do business are definitely competent in English. I gave a presentation there on Singapore and many of them understood what I said and asked a lot of questions in return. They try very hard to master the English language.

Do you think there are opportunities in Ukraine for Singaporeans? Do you know their views on foreign talent and immigrants?

I am not very sure about their policies, because I did not spend that long a time there. But from what I have seen, there are more foreigners in the capital than the small cities. I do not think that is because they are not open to foreigners, but perhaps because foreigners do not venture to these small cities.

Do you foresee any difficulties for a Singaporean to live and/or work in Ukraine?

Well, it is much slower paced there but it would not be difficult for a Singaporean to adapt. However, it may be frustrating for some after a period of time. You will need to practise patience in getting used to the Ukrainian way of doing things.

What do you mean by the Ukrainians way of doing things?

There is a lot of red tape and bureaucracy. And Ukrainians do not rush when they do things. You might have to keep pushing for tasks to be done, which may take quite some time. I think the slower pace of life is the greatest thing a Singaporean will have to get used to when he or she is there. 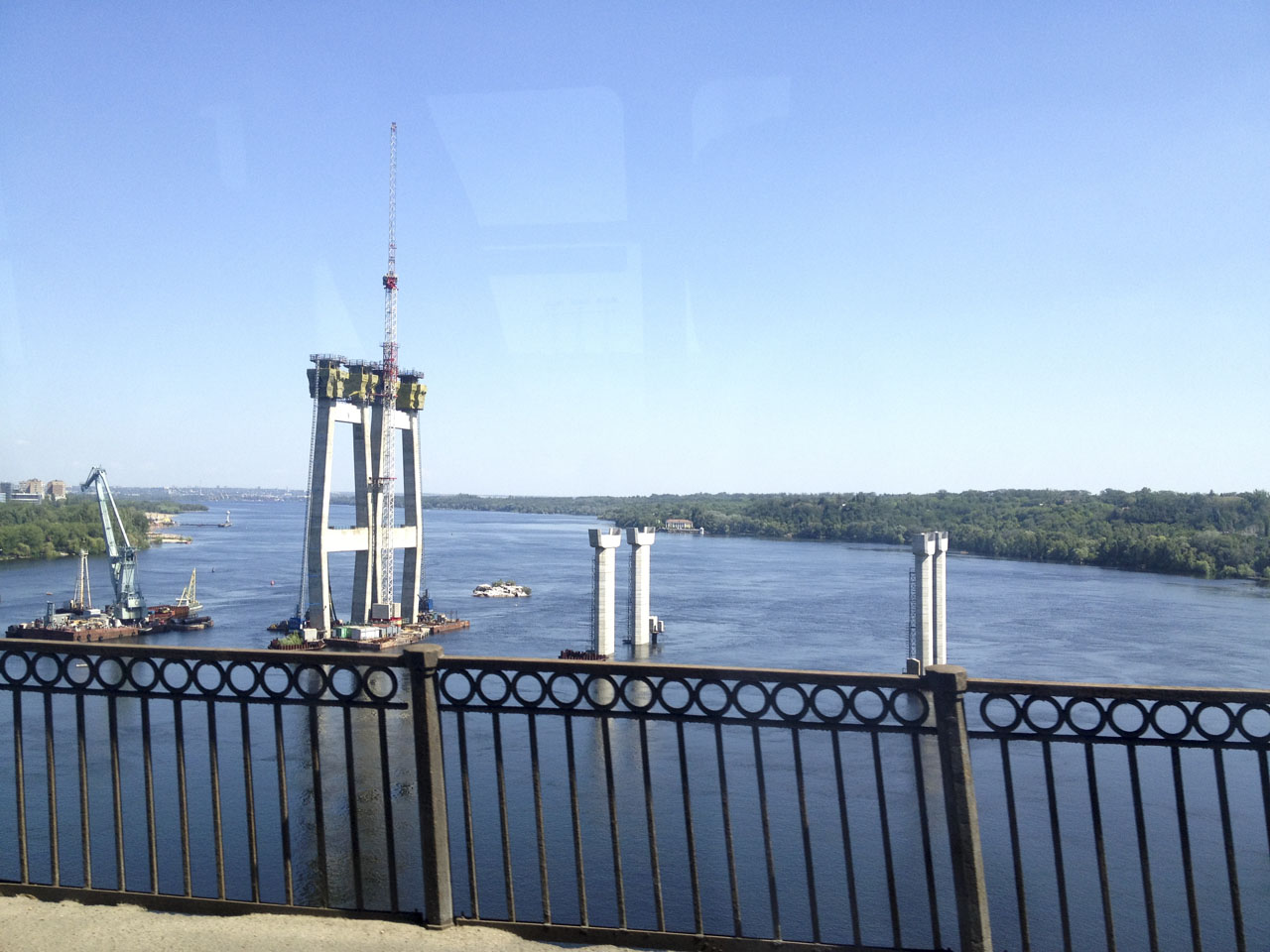 This is a bridge in Ukraine that has been under construction for 5 years | PHOTO: Mark Thompson

What are some tips you can offer to our readers who want to go to Ukraine?

It would be good to pack for the weather, as it can get frigidly cold in winter and Singapore-hot in summer. In between these seasons, it is usually just cold.

A simple language phrasebook would also be useful for those who do not know Cyrillic.

It can get quite dangerous at night to travel alone, especially to the isolated parts of the city. Also, while locals may look irked off at foreigners at times, it is not what it seems. They just need a little warming up and you need to be proactive. Ask and most locals will be more than willing to lend you a helping hand.

Are you able to share with our readers some simple Ukrainian greetings?

“Smozhno” stands for something similar to ‘bon appetit’, and “spasiba”, similar to Russian, means ‘thank you’.

I think the best way to explore and understand a different culture is to be proactive with the locals, even if it is something as simple as asking for directions. Do not be afraid to take people up on their offers too and experience the local lifestyle, for instance, spend a day swimming in the river or an evening just drinking beer in the park.

These are the experiences that offer the best glimpse into a culture and give us a chance to identify with a foreign lifestyle. Who knows, you might find similarities half the world away.

Remember to check out exciting and enriching exchange programmes organised by AIESEC Singapore. Find out more here. Be sure to catchus(at)gobeyond.sg if you know of any opportunities in the emerging regions!