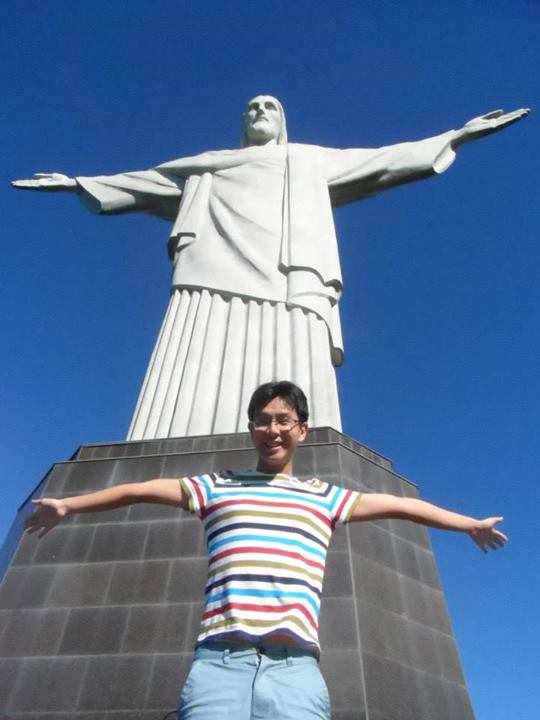 Liang Quan posing in front of the iconic statue, Christ the Redeemer

I guess many people in Singapore know something about Brazil even if they had never been there before. We have heard about its mighty Amazon rainforest. We admire its legendary football achievements and get wowed by the sizzling samba dancers we see on TV. It is these bits of knowledge and my thirst for travel that I have made Brazil on my bucket’s list of countries to visit. And when I got to know that NUS is organizing a school trip to this amazing country in July 2013, I did not hesitate to join the trip. Over a course of two weeks, my fellow NUS friends and I spent a marvelous time in five different places: Sao Paulo, Rio de Janerio, Porto Alegre, Angra dos Reis and Ilha Grande. Each place offered me a unique window into Brazil, be it culturally, socially and environmentally.

In Sao Paulo, I was very much surprised that amidst the largely white, African and mestizo population, there is a substantial community of Japanese. So much so that no one really viewed us as non-Brazilians while we (a bunch of Asians) were walking around in the city. I guess they presumed we were Japanese Brazilians too. What struck me most was how integrated they were in Brazilian society. We had the chance to meet some students of Japanese-descent at Sao Paolo University. When we asked them whether they could speak Japanese or feel anyway connected to Japan, they replied in the negative. They simply viewed themselves as Brazilians and felt they were in no way related to their cousins many times removed in Japan. 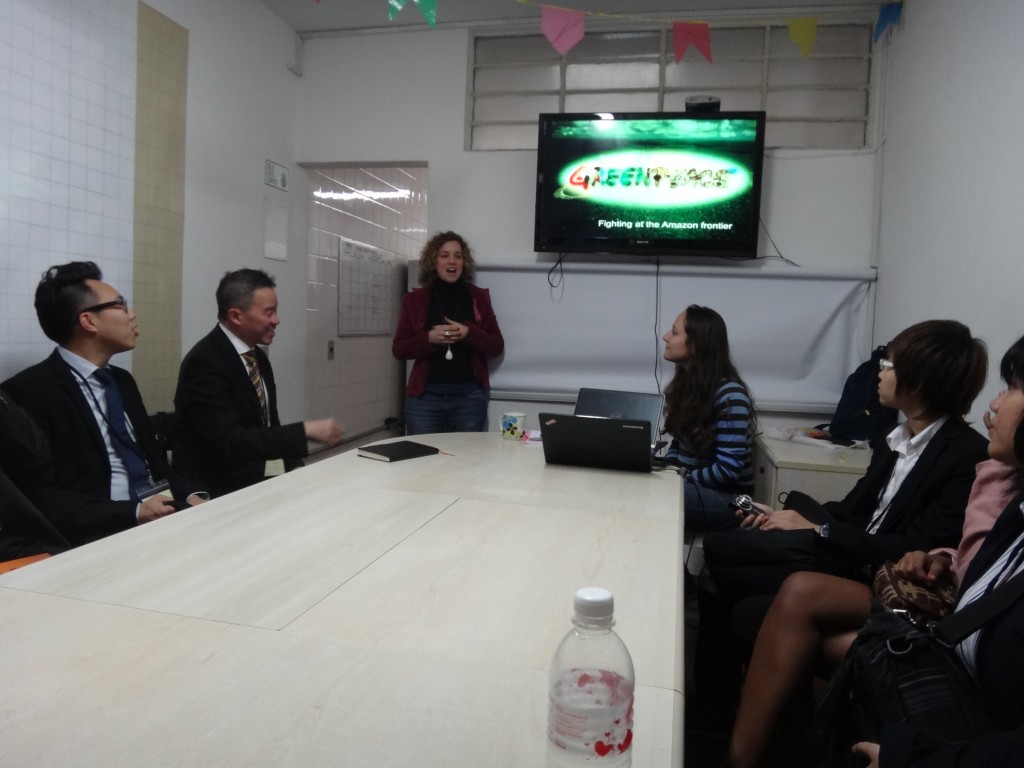 A visit to the Greenpeace office in Sao Paulo

I guess this would probably be the same story for us in Singapore. If a foreigner asked me a similar question on whether I feel connected to China, I would give the same answer. Their successful integration into Brazilian society was certainly not free of hardships; we saw what their ancestors experienced in their heritage museum. However, being able to count themselves as a member of the big Brazilian family and intermarrying with other ethnicities is certainly something we can emulate when we talk about nation building in Singapore.

Another interesting event there was the samba dancing at the Maua Institute of Engineering. While it was something really impromptu organized by the students who were hosting at their engineering fair, I had a nice time dancing around with the local students. I really wonder if dancing is ingrained into Brazilians since young. All of the local students could dance so much better than us, and they were not professional dancers either. In any case, I figured out that I am never able to make the cut as a samba dancer, the footsteps are really complex for me and I was totally lost after a while. Still, it was a wonderful time interacting with them. 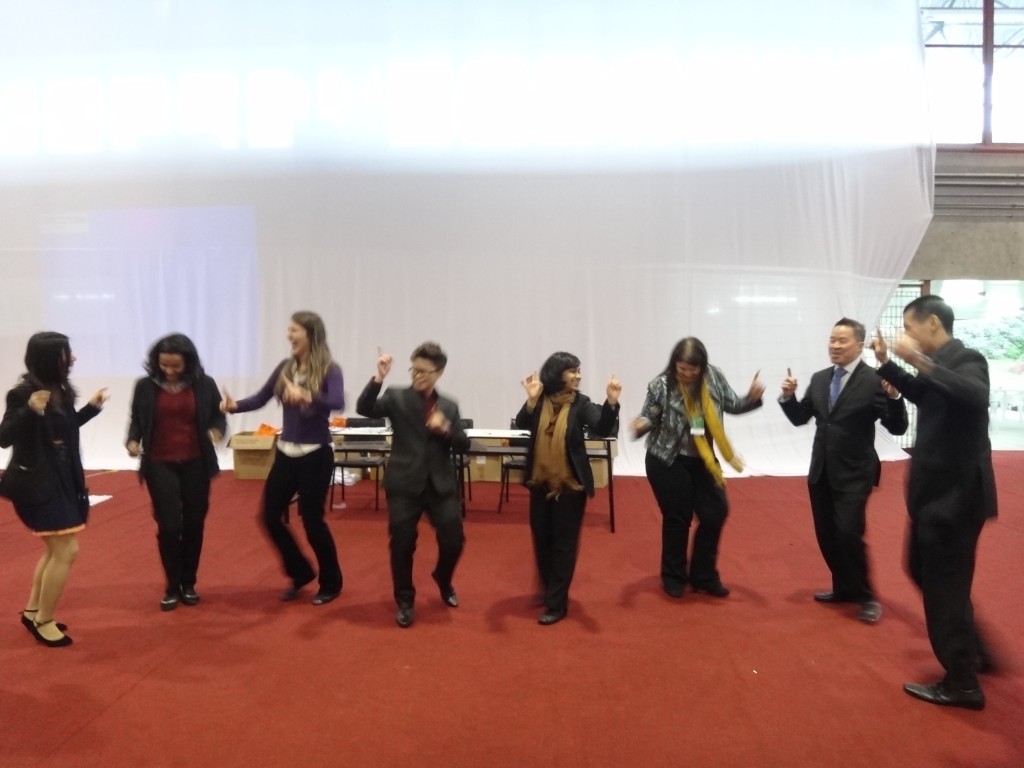 Moving on to Rio de Janeiro, the favela trip was the greatest highlight for me during the trip. Most of us have heard about how appalling living conditions can be in a slum, but being inside one speaks of a totally different experience. The conditions were certainly unhygienic and the houses looked really precarious as they perched dangerously on the steep hill. However, the one thing that I saw was how perseverant the favela residents are.  They are always smiling when they meet us, our guide also welcomed us warmly to his house, which was strangely full of clocks, more than a hundred of them! Of course one might argue that they just wanted to make sure the visitors leave the favela with a nice impression, but you can sense the warmth in the smiles, it’s genuine. It really made me appreciate a lot more about my own living conditions back home. But more importantly, we really have to think about how we can make the world a better place, where the poor has a chance to get out of poverty for good. 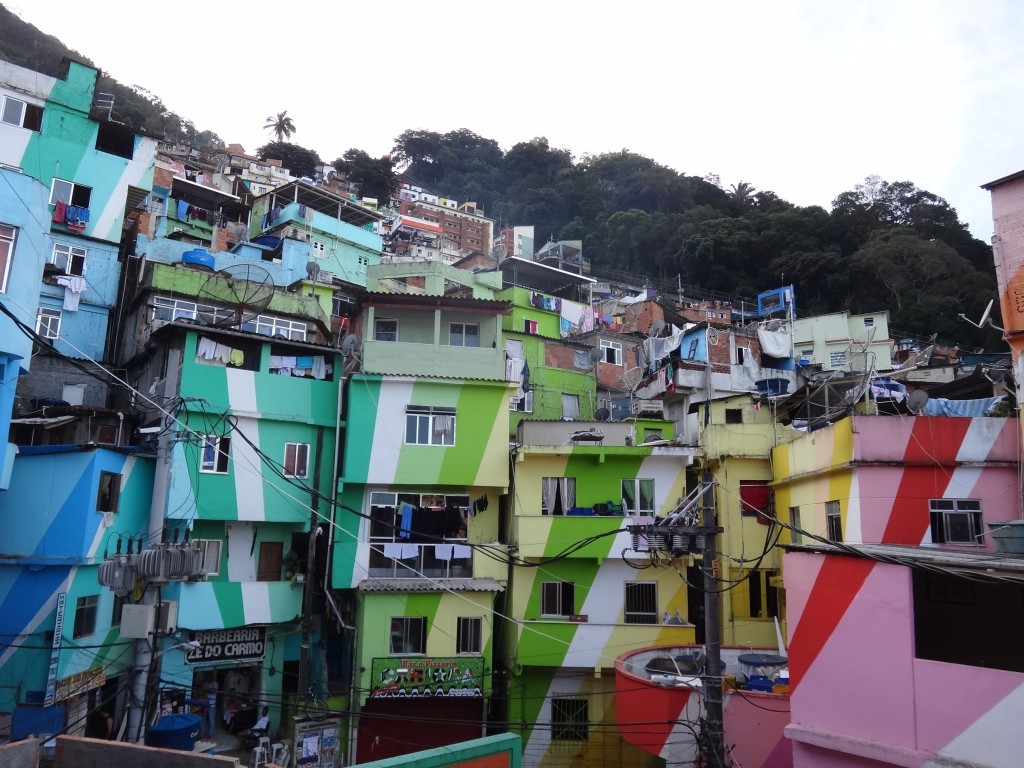 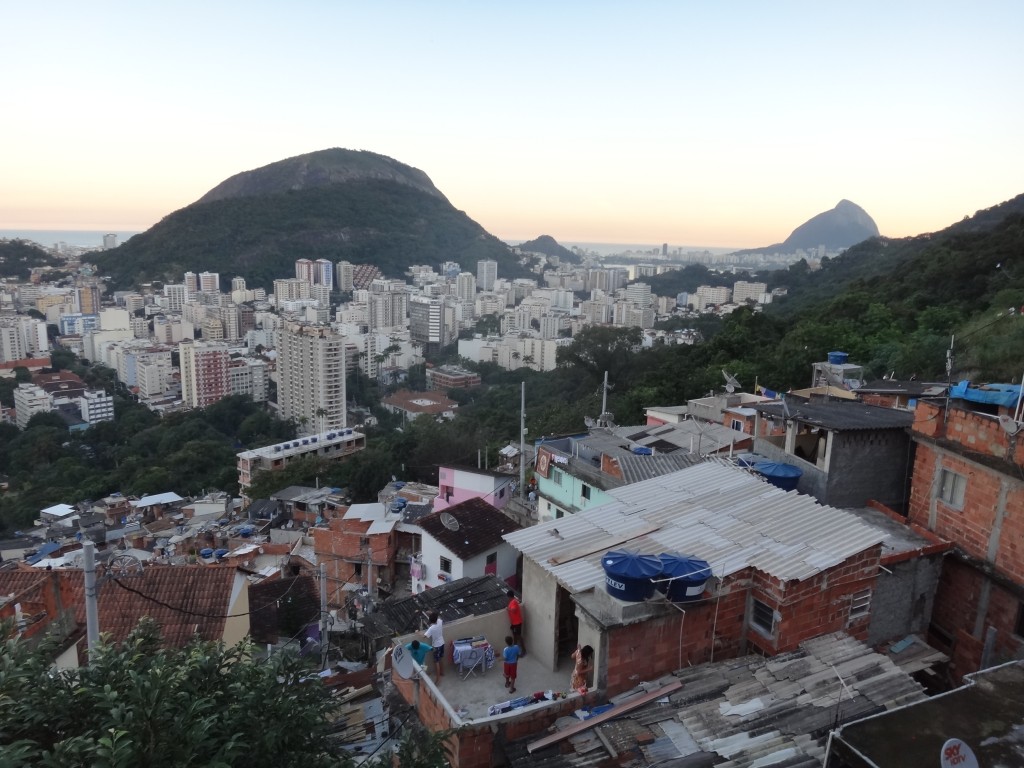 View from the favela

Another great activity was people watching / playing in the sea / sun tanning at the famous beaches. At Ipanema or Copacabana, there is always a throng of beach goers in this marvellous city (yes, that’s what the locals call their city) enjoying their time by the beach.  I was really lucky to head to the beach on a sunny day. Even if one hates the beach for some reason, the vibe around the area, plus the throngs of good-looking men and women would probably change his mind. There are plenty of bars and changing facilities along the beach too, which makes it possible for one to really chill by the sea for a whole day. While one might think it might be some cliché tourist activity that’s normally done in Rio, it demonstrates a different way of lifestyle of Cariocas that might give some pointers for the many Singaporeans who feel stressed in their lives. What are we rushing for? Shouldn’t we take some time and interact with each other by the beach and see the world go by? 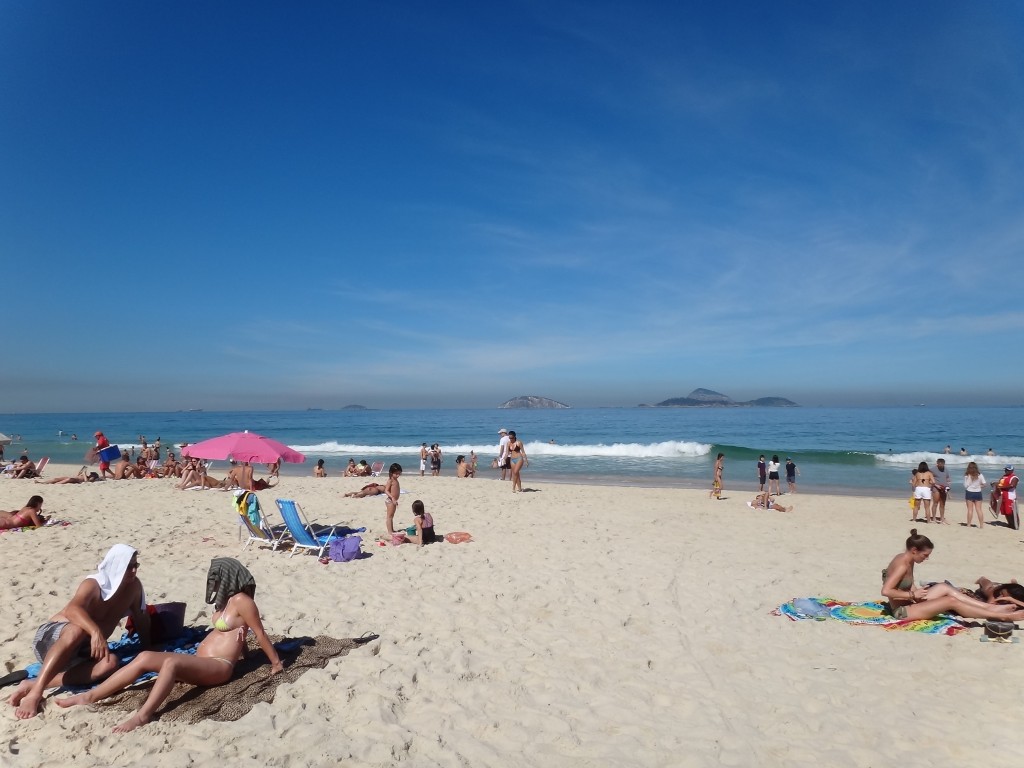 Ipanema beach – everyone was so relaxed and thoroughly enjoying themselves 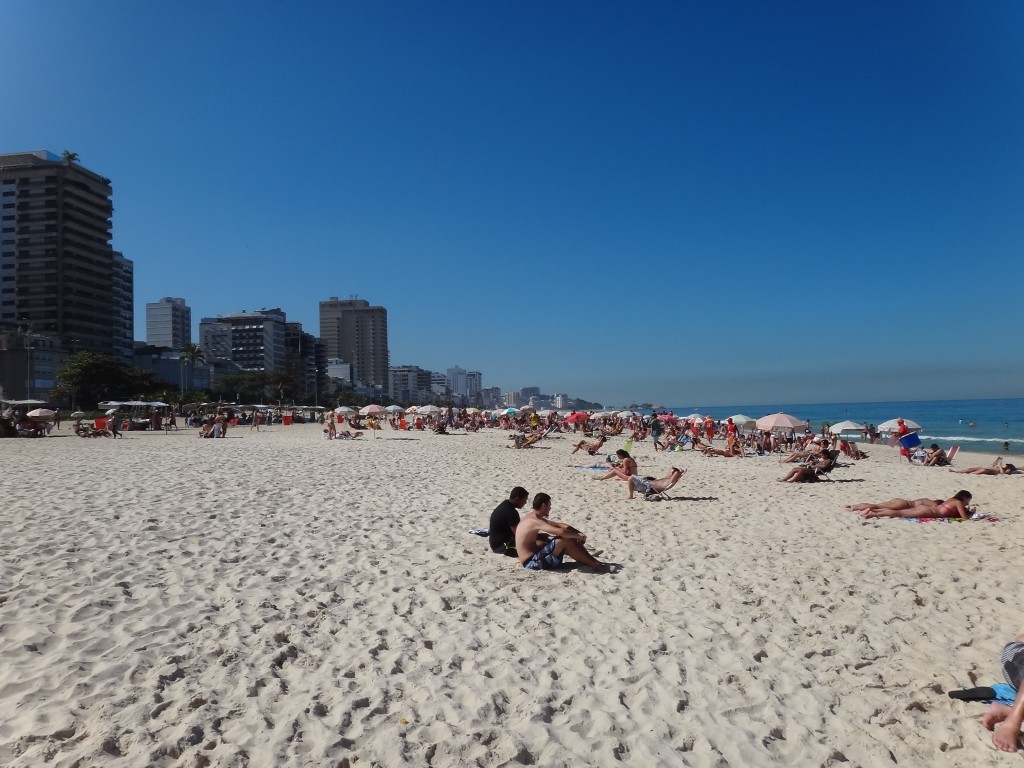 Another beautiful view of Ipanema Beach